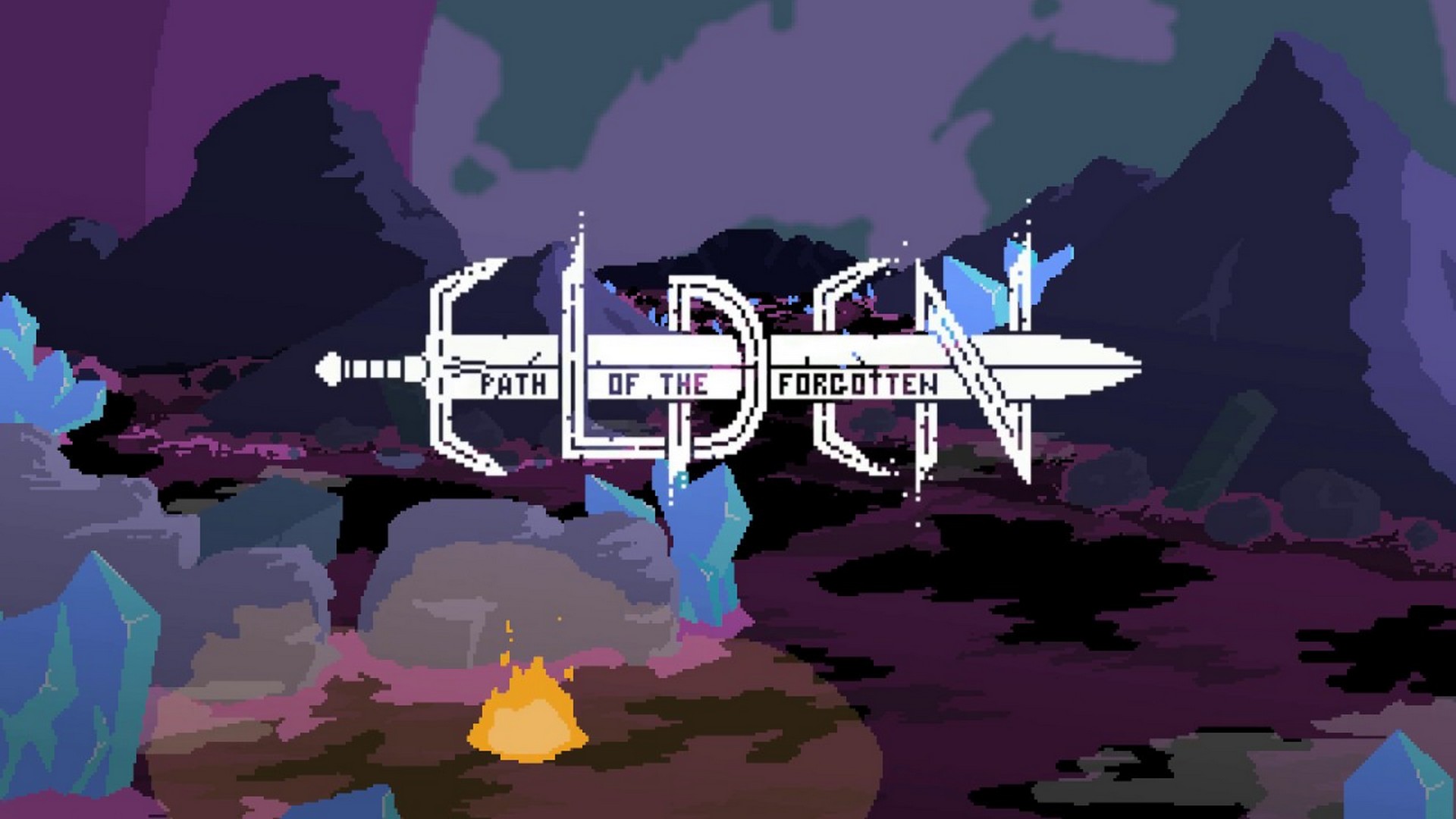 I’m 100% behind an Aussie-made game. One of my favourite features that WellPlayed has is our Made In Australia segment, not to mention that one of my favourite games is Australian-made (Hollow Knight). In my time with WellPlayed, I’ve also become known as the Souls aficionado , and so pretty much any game that takes inspiration from Hidetaka Miyazaki and his team’s work has garnered my interest and, usually, the review falls on to me *looks at Nioh 2*. Elden: Path of the Forgotten is one such game and while there is a great amount of love and quality put into the game, I just couldn’t find myself enjoying it.

Much in the same fashion as Dark Souls, Elden starts the player off without explaining much. You more or less wake up in a room, pick up your weapons and head off on your adventure. This pixel art action game takes the less is more approach and its minimalist design allows for its gameplay to take hold in a surprisingly easy fashion. You can actively choose between a battleaxe, a spear and a sword as your current equipped weapon, and the game never prevents you from changing this on the fly outside of potentially not picking up the weapons themselves at the start of the game. The battleaxe is for slower, heavier attacks and movements, the spear is for long-reaching, forward-facing attacks in relation to the character and the sword is for low damage, quick attacks. I found myself relying on a mix between the sword and the spear, with a majority of my spear use being for hitting enemies through walls and into adjacent areas, making my exploration of those areas once I reached them a lot easier. Overall, the gameplay is a simple matter of easy to learn, hard to master. I personally didn’t enjoy the gameplay all that much, but that’s more just a matter of taste and not a problem with the gameplay itself as it serves its purpose perfectly fine. My only problem with the gameplay stems from the fact that half the encounters can be trivialised by standing still and just waiting for whatever you’re fighting to just come into range of your melee attacks. Additionally, every attack staggers enemies so much that stun-locking enemies that have power ranged capabilities is nothing short of entertaining, but for all the wrong reasons.

Even though the gameplay is relatively simple and easy, the game isn’t exactly easy in kind. There is absolutely a learning curve in your first hour or two with the game and it ultimately ends with the first boss which brings me to my core issue with the game. The pathfinding AI for some of the bosses is not perfect and even the bosses that don’t need pathfinding AI are inherently broken due to strange exploits, like keeping the boss off-screen to deal with mobs in the room and then just constantly running side to side after dealing two or three sword hits to the boss to completely ignore its attacks. Each boss had its own cheese or exploit which undermined its tonal presentation. While it is funny to notice these things, they do feel like design oversights.

One thing which I absolutely adored in Elden: Path of the Forgotten was its art design and atmospherics. Like I mentioned previously, Elden employs a pixel art aesthetic, which is similar to games like Titan Souls and Kamiko. This doesn’t stop the game from being visually unique compared to other games of this ilk. Lots of solid colours that give off an almost two-tone vibe and brighter splashes of paint here and there make this game feel different from the rest, where a lot of pixel art games tend to rely on grey, green and blue. On top of this, the enemy designs are incredibly unique, especially as you go further into the game and see the more Lovecraftian designs (which are what had WP Head Honcho Zach Jackson intrigued in the first place). Environments are incredibly varied and so each focal progression point really makes it feel like you are entering into another stage or chapter of the game. There is no denying the amount of care and attention that went into crafting the environments and their hostile inhabitants.

Sound design is another facet where I find myself quite pleased with Elden. It’s pretty old news that I’m a slut for good audio design and Onerat was on the ball here. From hearing your companion bird flapping its wings to hearing the fires crackling, everything sounds as it should and has been given diagetic properties (the sound actually comes from the elements it’s supposed to). This little touch made the game feel great and it was actually helpful in isolating threats that were off-screen. 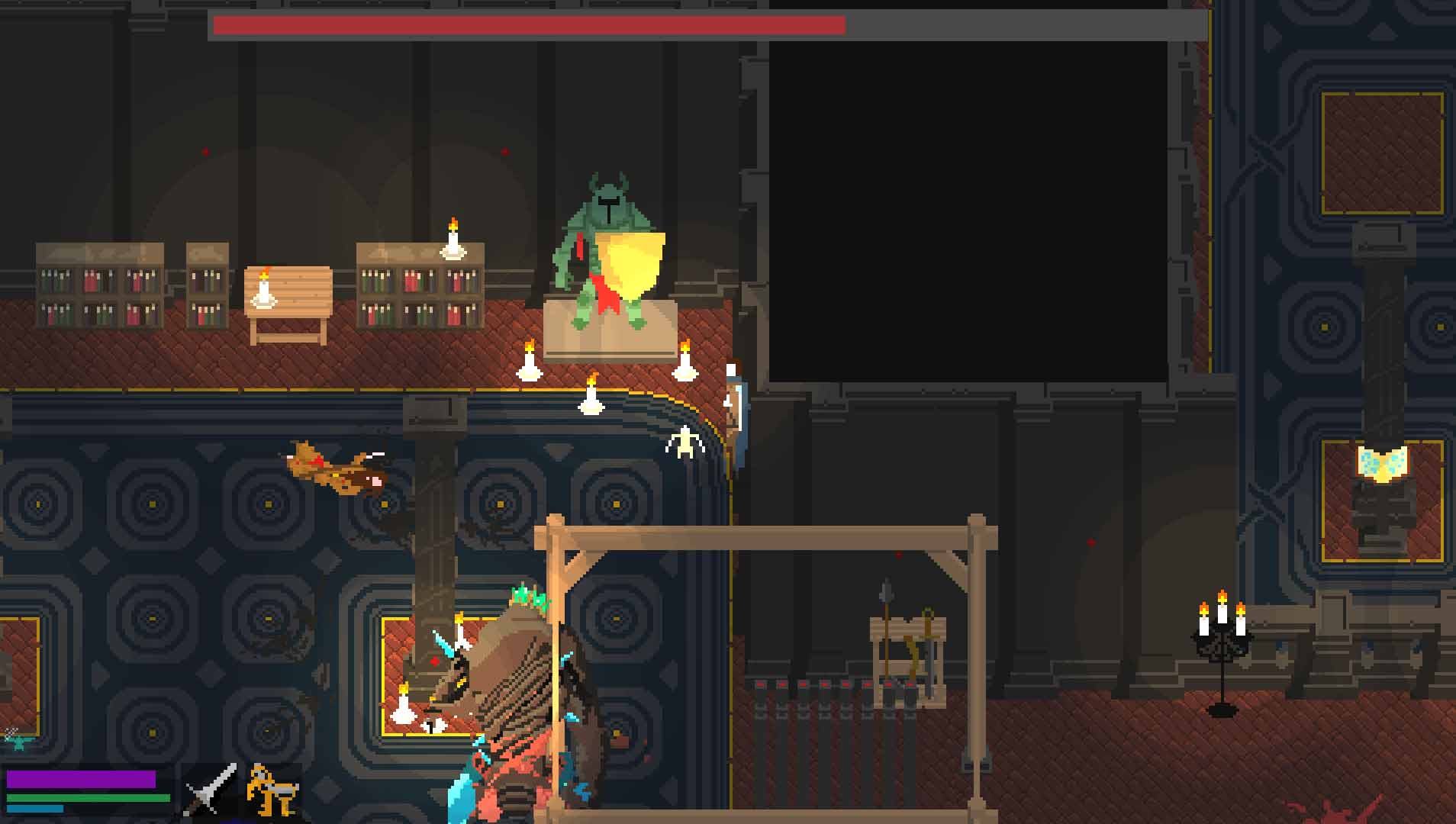 In terms of level design, Elden is pretty solid. There are relatively large environments in each area which all hold their own little secrets and rewards. Exploring these areas to the fullest is by no means necessary for progressing through the game, but you may find yourself a little more equipped with healing and restorative items which increase your survivability. There are moments where the level design can be a bit silly, mostly when there are elevated ledges and cliffs. The game doesn’t do the best job at communicating these features until you’ve either bashed your face against a cliff or you go behind it, which then makes your sprite and every other sprite turn solid white. This was always frustrating and, if you don’t know the environment incredibly well, can quite easily kill you.

Now, it comes as no surprise that this game doesn’t support ultrawide. I never expected it to. Hell, even my beloved Hollow Knight doesn’t support ultrawide, at least not without a little nudge in the form of hex editing. Where this game did kind of throw me for a loop is how it tried to support ultrawide after moving monitors. There was a moment in the game where I had to pause and I moved it to my second monitor, which is just a standard 16:9 1080p monitor. When the time came to move it back, I was confused. The game had zoomed in so the left and right screen bounds would fit my ultrawide monitor. While I didn’t mind this at first, it quickly became a problem when what little HUD there is, was off-screen so I couldn’t see my stamina, mana, health or restoratives. This is the only game I have played that has had this issue and I’m not exactly sure why this exists. If you play on ultrawide, don’t change what monitor the game is displayed on.

Even though I personally didn’t enjoy a lot of Elden: Path of the Forgotten, there is no denying that there is a lot of quality in its design and execution. Things like cool sound design, great art and simple-yet-effective gameplay all overshadow its minor problems which mainly stem from boss exploits. Those that like pixel art games and want something at a bit of a slower pace and more of a challenge, you’ll find yourself right at home with this Aussie-made gem. 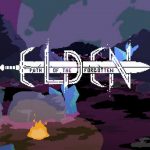 Elden: Path of the Forgotten Review
Rocky Roads
Crafted with love and care, Elden: Path of the Forgotten is yet another gem from an Australian developer
The Good
Great art
Great sound design
Easy to learn gameplay
Cool environments
The Bad
Lots of boss and enemy exploits
Weird behaviour on ultrawide when changing displays
7
Good
In this article:elden path of the forgotten, indie, Loveraftian, made in australia, Reviews