Fairy Tail doesn't do a whole lot to separate itself from the crowd. Strong writing aside, the game uses systems that have been done by countless other games, just not as well as them

Fairy Tail is an anime that kind of took me by surprise. I watched it while waiting for the entirety of the Dragon Ball Super English dub to be released on my preferred anime service (yes, I’m a dirty dub watcher). It’s nothing incredible, just a fun shonen anime and the power scale was a pretty smooth one, unlike the incredibly popular Dragon Ball Z. Regardless, I never actually completely caught up on the show as life got in the way, naturally, but that didn’t stop me from being somewhat intrigued when a Fairy Tail RPG was announced. I didn’t know what to expect but I can’t help but feel slightly disappointed with the end product, a barebones RPG that adds nothing meaningful until you’ve invested a solid amount of time into it. It ends up being a game that is nothing special for fans and plain confusing for newcomers.

To kick things off, we need to learn where exactly it was that I left off with Fairy Tail. I left off with the series around halfway through season 6, which is a bit of a bummer because season 5 was so damn hype that I’d watch it all over again. I’d found myself a little taken aback by the direction the story went in for the sixth season but I didn’t let that stop me from enjoying it. Like I said before, life got in the way and I unfortunately no longer had the time to invest in the show anymore. Anyway, Fairy Tail (the game) starts with…the end of the fifth season, which I found incredibly amusing but it also confused me. I found myself questioning if I had done something wrong to skip five seasons of content – I hadn’t, it just starts at the end of a complex season. This immediately makes the game not great for people that aren’t well versed in the events of manga/anime. I was actually glad that it at least picked up from where I ended so I knew what was going on, but I can imagine newcomers thinking “what in the hell is going on, who are all these characters and why should I care about them?” This is all without mentioning the bizarre pacing of the game’s story. 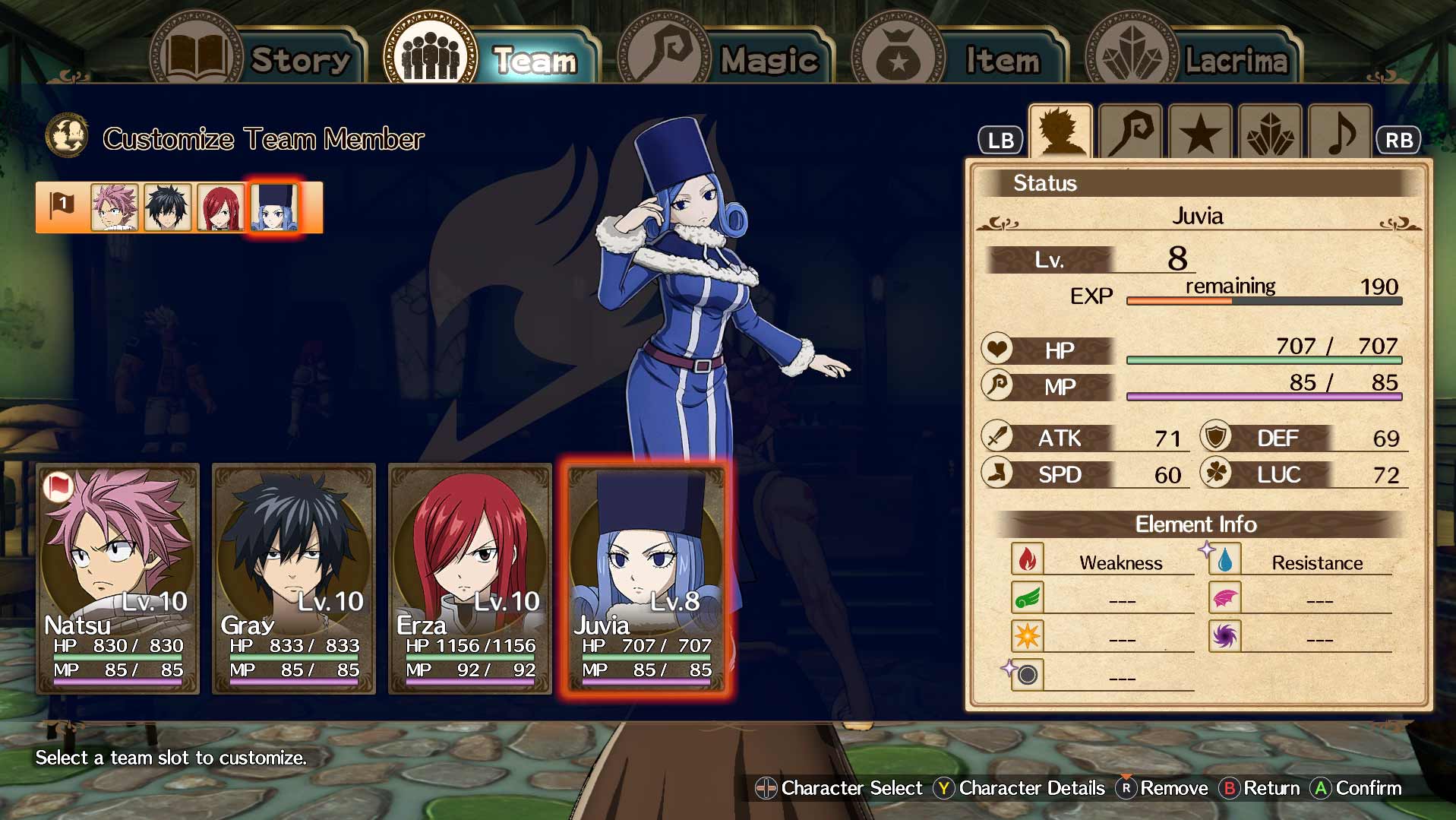 Unsurprisingly, the anime (which is where a lot of people would garner their interest in this title from) has a lot of filler in between key sagas and this period where the game picks up on is one of the worst offenders. Coming off the huge success of the Grimoire Heart events, the story is supposed to spend quite a while with a slower form of pacing to allow the viewer to properly digest and process the events prior. However, this does not translate well into games as it usually just turns into menial fetch quests and pointless, five-minute arcs that add nothing, which the game tries to avoid by skipping details left, right and centre. Not in the same manner that Dragon Ball Z Kakarot did earlier this year, which glossed over a variety of smaller details, but rather entire episodes worth of content are tossed to the side, making for a jarring experience. It took a solid 10-12 hours or so for me before the game’s events actually got interesting, but in its defence when things do get going the story becomes quite engaging. If you’ve kept up to date with the series, the story is nothing you don’t already know, just slightly less detailed and nuanced. If you’re someone like me, who stopped halfway through season 6, then it might not be a bad way to experience an abridged form of the Fairy Tail story…sort of.

Where Fairy Tail really loses me is in its gameplay. I didn’t know what to expect on this front, but given that the last game I played from developer Gust was Nights of Azure, a game whose core gameplay loop was more akin to a modern Kingdom Hearts game, I was at the very least a bit hopeful that I wouldn’t get some cheaply constructed turn-based combat system that can get in the way of what Fairy Tail actually is. Sure enough, Fairy Tail relies heavily on tired turn-based mechanics you’ve seen in a thousand other, better JRPGs, and it runs counter to the fast-paced nature of the series itself. The only part of the turn-based combat that feels kind of interesting is the tiles mechanic. Each combat scenario has enemies placed in a 3×3 grid, with the enemies taking up a varying number of tiles. Some exist within one tile, others can take up the entire grid. You have the ability to choose between moves that have different tile patterns and strengths, and learning how and when to use certain abilities is paramount to success. This is especially true as you begin fighting bosses and if you haven’t done enough grinding as you move through (which the game punishes heavily).

Outside of the combat, Fairy Tail exists as a pretty generic JRPG. There are a number of small areas with loading points all around them, filled with enemies that are annoying more than anything, which means you spend half your time trying to avoid them rather than trying to enjoy the very average level design. So what else is there to do outside of avoiding the annoying enemies and meandering through the story? In some ways, Fairy Tail is similar to something like Pokémon Mystery Dungeon DX, where you take requests from a bulletin board and complete them to earn various rewards and rank up your characters. Where it differs is in the fact that you can only have one request active at time, whereas in something like the Mystery Dungeon games you can have multiple requests active so long as you complete them all before your request limit is reached. This makes meeting the rank requirements for Fairy Tail’s key progression power and level checks that much more frustrating as the game really tries to artificially pad itself out by making you go back and forth, doing one request at a time. I understand that in the source material, guild members and groups can only accept one request at a time but this translates really poorly into gameplay and has very clearly been used as a progression-gating device rather than a logical rule that the world has established. So ultimately, the questing is all fetching and boring bounties, vastly hampering any sense of progression. 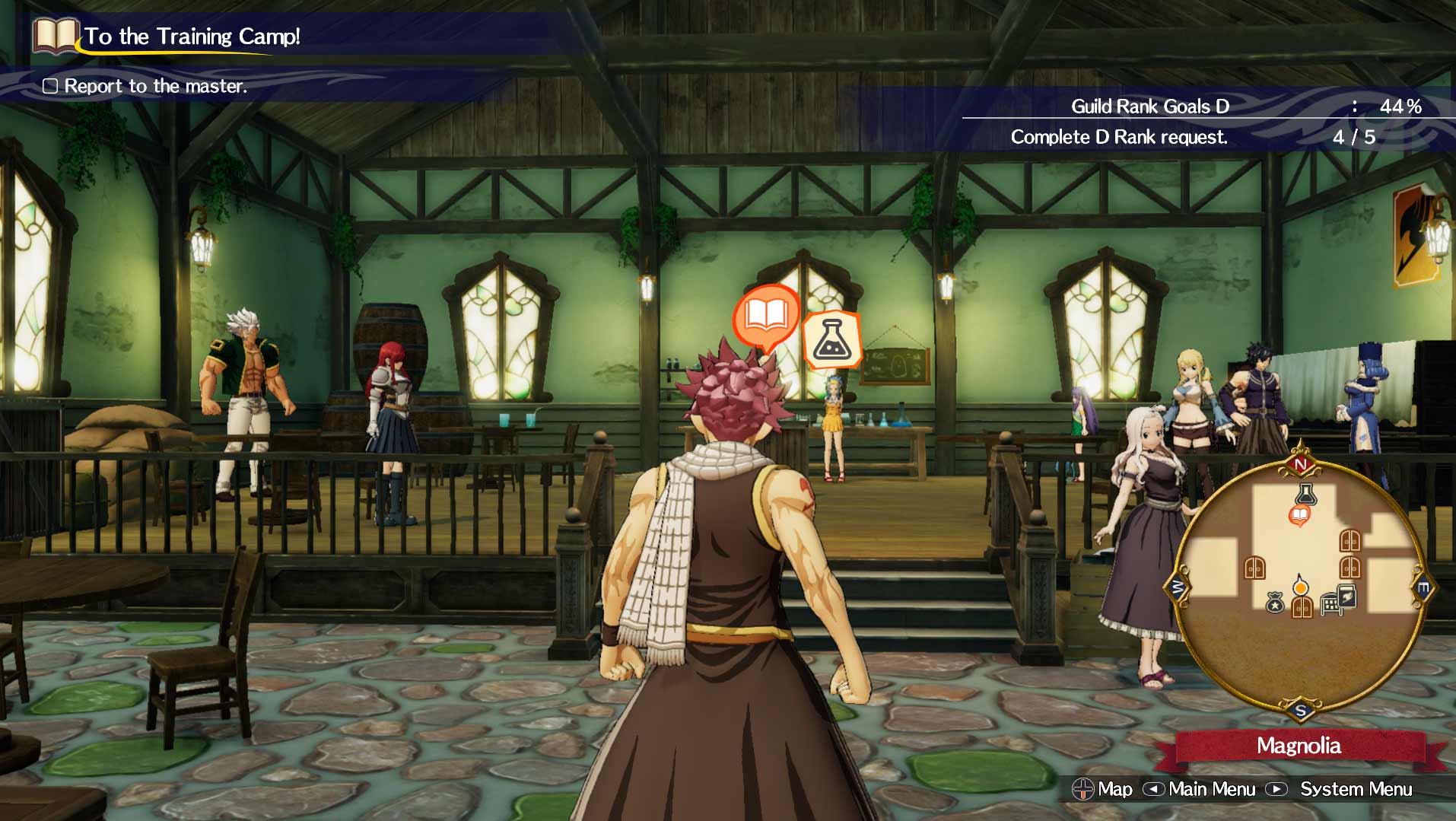 Speaking of progression gating, the bosses are exactly what my perception of difficulty in a lot of JRPGs is – obtuse and pace breaking. This is not to say that the game is hard, it’s actually quite the opposite. Enemies never really pose too much of a threat and your general progression is quite linear until you hit the bosses, of which there are a lot in the middle sections of the game. Compared to garden variety battles, bosses feature frustrating design choices like attacks doing a fraction of their normal damage because of resistances while the bosses hit like a freight train – one of the fights I had to heal myself every other turn otherwise it would result in a fail and I’d have to start the whole fight again…all THREE phases.

Moving on to the technical side of this game, it sure is a thing. I played the game on PC and while the game mostly sat within its 60fps target, its PC port is truly terrible. It’s so bad that I don’t look so poorly on Dark Souls: Prepare To Die Edition or NieR: Automata on PC anymore, they seem perfect in comparison. The texture work is terrible, to the point where I’d say Final Fantasy XIV, a seven-year-old game, looks notably better. Everything is just flat and boring and rendered in incredibly low quality. It has been brought to my attention that there is a patch that addresses some quality issues but I doubt it will help that much. In addition to this, the keyboard commands are absolutely borked and make no sense at all and the display modes for the game are incredibly restrictive. There is no ultrawide support so there is that annoying pillarboxing and anything that goes into the black bars has severe ghosting. How does a 2020 game not have some form of borderless fullscreen mode?

Fairy Tail is a game that I had no real expectations for and yet it still somehow disappointed me. Firstly, the low action combat is completely counterintuitive to the high action property that Fairy Tail is. Couple that with its average gameplay and level design, low fidelity visuals and poor PC support lead, and you’ve got an average-at-best game whose main redeeming quality is the story. But even the good story risks being too esoteric for newcomers, and too familiar and abridged for series’ fans, and whoever this game is pitching itself to, they’re likely to walk away disappointed.