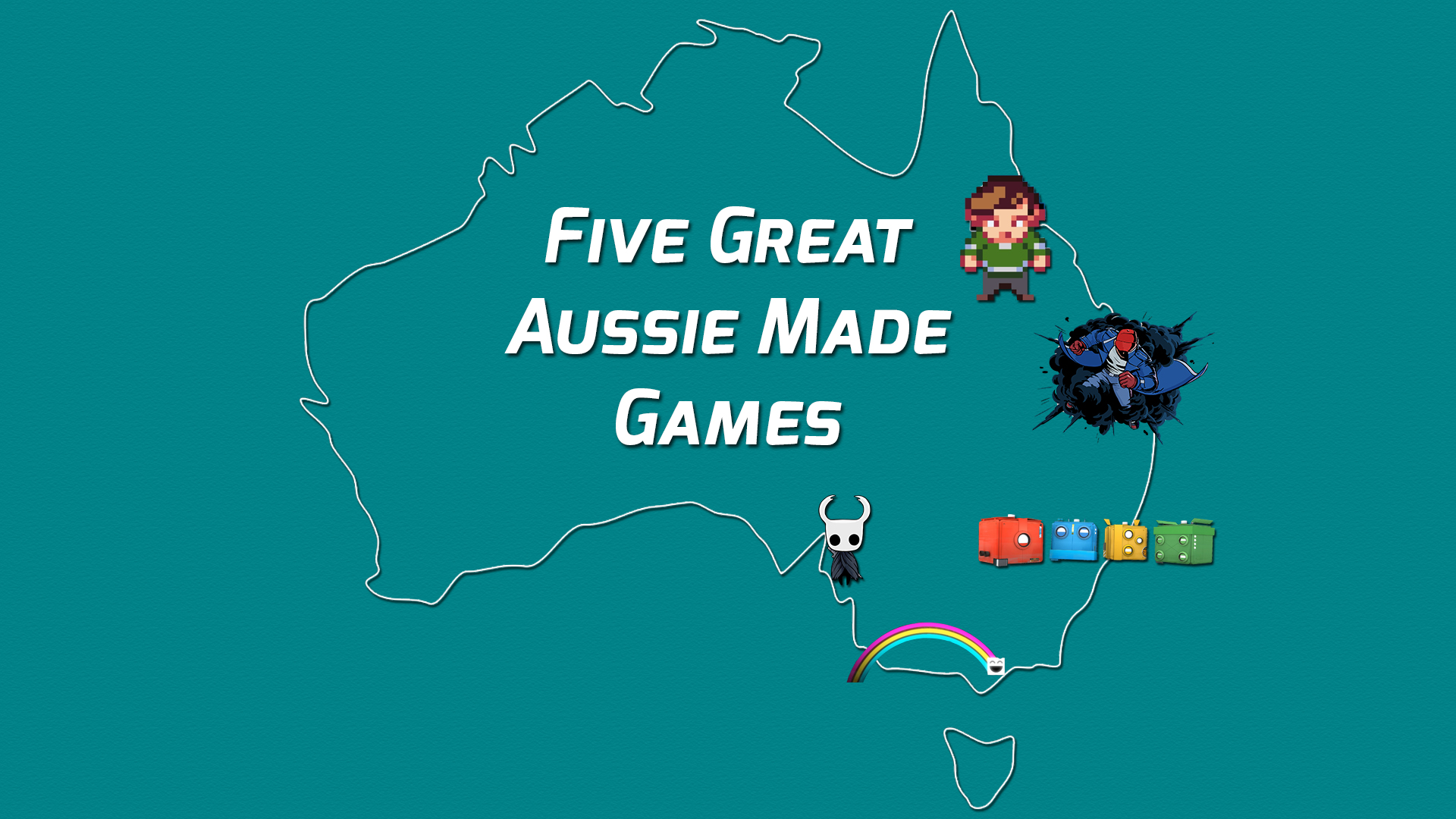 There’s no doubt that us Aussies love it when our fellow ‘Strayans are succeeding and being recognised on an international scale. Whether it be the pride of seeing one of us win a gold medal at the Olympics, riding the coattails of Tim Cahill at the FIFA World Cup or taking Hollywood by storm, we’d bleed green and gold to see some fair dinkum recognition for our homegrown heroes. Thankfully, we are finally starting to see amazing games being made right here in our big backyard, a new reality that makes me very giddy. The Australian industry has recently produced a decent number of titles that have garnered worldwide praise and attention, so I’ve put together a list of five great titles that were conceived here in the land down under.

Arguably the most known and highly revered game on this list, Hollow Knight is an indie Metroidvania with a distinct and beautiful art style that first appeared on Kickstarter way back in 2014. Developer Team Cherry, who reside in Adelaide, South Australia managed to accrue a total of AU $57,138 throughout their campaign, more than AU $20,000 above their goal. There’s no doubting that $50,000 is almost nothing when it comes to funding the creation of a game, yet somehow the Adelaide team managed to craft one of the greatest indie games of recent times.

Hollow Knight is up there with the Metroidvania elite, such as Super Metroid, Castlevania: Symphony of the Night, and Ori and the Blind Forest, with many citing it as the best Metroidvania of all time. Not bad for a couple of Aussie blokes.

The game is simply just a great time, with the fluid and engaging gameplay being accompanied by an awe-inspiring soundtrack and art style. It’s still getting the occasional free update as well, with new bosses, quests and more having been added since launch.

As of right now Hollow Knight is only available on PC but with a Nintendo Switch version slated for release in a couple of months it’s sure to garner even more praise and fresh recommendations in the future.

Death Squared is a cooperative puzzle game in which players assume control of colour-coded, cubic robots and work together to get each robot to their coloured goal. Sounds simple enough, right?

While sounding basic in its premise, the game is actually rather difficult. For example, the red cube may be able to block a laser, which then gives green access to an area in which they can help blue reach their goal. The game requires constant communication and observation in order to succeed and makes for a great party game to play with friends and family. Even those who aren’t well versed in gaming can find enjoyment in Death Squared’s cooperative experience. In our review, we praised the game, calling it a ‘challenging yet gratifying puzzler’.

Developers SMG Studio, are a team located in Sydney, Australia, and have previously released titles available on PC, iOS, and Android. Death Squared was the studio’s first title to release on consoles, and is available now on Nintendo Switch, PlayStation 4, Xbox One, PC, iOS and Android. It’s safe to say we will be seeing more from SMG Studio in the future, maybe even in this list (spoilers).

Indie developers sure do love designing infuriatingly difficult 2D retro platformers, and that is exactly what you get with Super One More Jump. The game, which is exclusive to the Nintendo Switch, is a vibrant and frantic arcade platformer utilising a one button control scheme that is simple to learn but difficult to master.

With over 100 designed levels, as well as an endless mode that creates a new random level to try every time, you’ll never be short of things to do in Super One More Jump. If difficult platformers such as Celeste, Super Meat Boy and VVVVV have tickled your fancy you’d do well to give this platforming gem a try.

Super One More Jump is a collaboration between Melbourne-based Premo Games and the aforementioned Sydney-based SMG Studio, the developers of Death Squared.

If you were an early adopter of the Nintendo Switch, you’ve probably already heard of this one. Golf Story, which released exclusively for the Nintendo Switch in September 2017, is a role-playing sports adventure game that centres (quite obviously) on golf.

Taking heavy inspiration from fellow golf RPG Mario Golf on Game Boy Color, Golf Story provides players with an enjoyable arcade golf experience, packaged alongside a world of interesting characters and environments. Golf isn’t all you can do either, with races and drone flights being just a few of the title’s other activities. Golf Story is a brilliant game, and even if you dislike golf, it’s worth a shot.

Golf Story was the debut title developed by Sidebar Games, a studio located in Queensland, Australia.

If you’re a fan of Hotline Miami, Mr Shifty may be something to pique your interest. Mr Shifty is a 2.5D top-down beat ‘em up in which the titular character, Mr Shifty, must progress through a facility in order to steal a plutonium core and take out a multitude of guards along the way.

Gameplay involves Mr Shifty teleporting throughout the game’s levels and killing guards with whatever he can get his hands on, whether it be melee weapons, or his bare hands. Teleporting through walls and manoeuvring feels really enjoyable, and shifting out of the line of bullets and beating down enemies is extremely satisfying. Mr Shifty is a fast-paced and addicting arcade experience that I recommend everyone give a crack, especially if you enjoyed Hotline Miami.

Mr Shifty was developed by Team Shifty, who are located in Brisbane, Australia, and it’s available now on Nintendo Switch, PlayStation 4, Xbox One and PC.

The Australian gaming industry has finally started to build itself up to a point in which it’s being recognised around the world, and even though that may not matter to many, it’s extremely important that our local industry starts to grow. These are just a few awesome titles developed in Australia, and I’m sure that the studios mentioned have more brilliant experiences up their sleeves. Let’s just hope they can finally get some government funding.