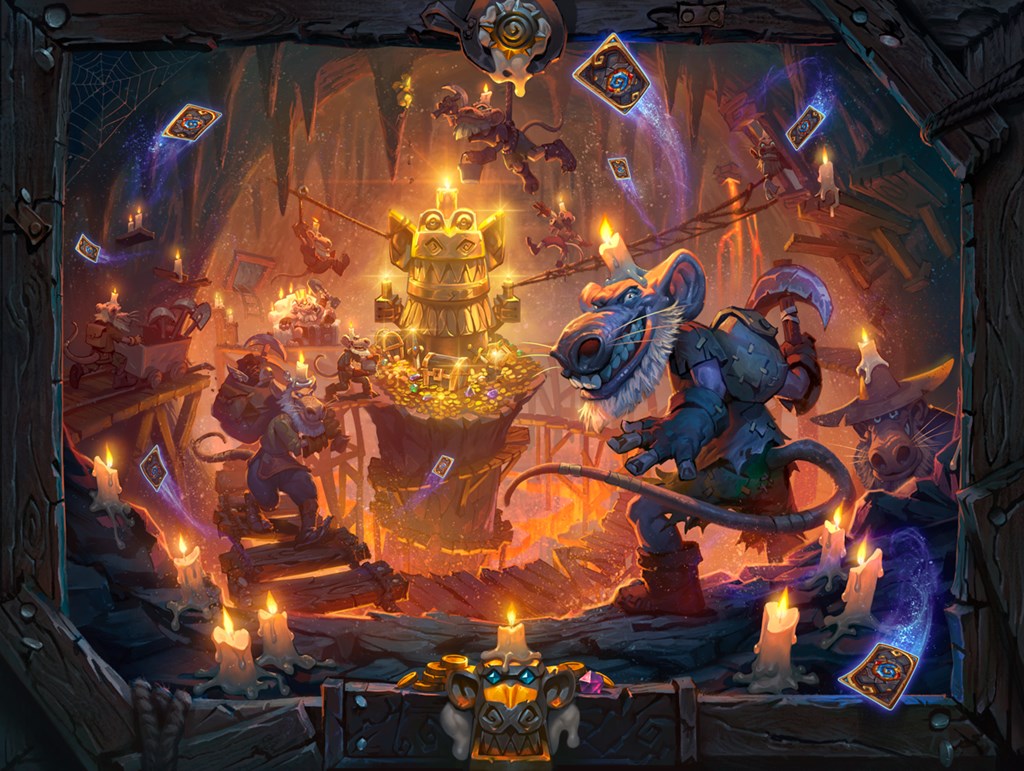 Hearthstone is still one of the biggest games on the planet and as usual, there is no better time than BlizzCon to unveil a bunch of crazy new stuff into the game. With one of the most bonkers expansions yet, 2017 and beyond is a game changer. Get hyyyyyype.

Venture into the dark, winding dungeons deep beneath Azeroth in search of ancient, legendary treasures in Kobolds & Catacombs, the upcoming expansion for Hearthstone, Blizzard’s smash-hit digital card game due out in December. Those daring enough to brave the hazards and monstrosities of this subterranean realm will have ample chance to stuff their bags with awe-inspiring treasures in the form of 135 wondrous new cards!

Pesky Kobolds have been tunnelling beneath Azeroth for thousands of years, uncovering and hoarding artifacts long forgotten by mortals and surface dwellers . . . but whispers of these mighty treasures ripe for the taking have begun to spread throughout taverns far and wide. Some of the most alluring rumours speak of powerful Spellstones among the 135 cards included in Kobolds & Catacombs: enchanted items that you hold in your hand to empower before playing. Intrepid adventurers will also be able to arm themselves with one of nine new class-specific Legendary Weapons! Players will receive one free Legendary Weapon the first time they log in to Hearthstone after Kobolds & Catacombs has launched.

The bravest and most foolhardy adventurers will need all the help they can get as they delve into Hearthstone’s free new single-player game mode: Dungeon Runs! Coming with the launch of Kobolds & Catacombs, Dungeon Runs will send Hearthstone players on challenging, high-stakes subterranean adventures inspired by the classic fantasy dungeon crawl. Players start with a novice deck from their class of choice and face a series of progressively stronger foes, randomly selected from a huge pool of unique bosses. As they progress, they’ll bolster their decks with cards looted from defeated bosses, including some immensely powerful treasures exclusive to Dungeon Runs. Heroes should plunder with caution, however, because losing a single battle will spell the end of their Dungeon Run.

Coming this December to Windows and Mac PCs; Windows, iOS, and Android tablets; and mobile phones, Kobolds & Catacombs card packs will be winnable in Hearthstone’s Arena mode and players can purchase them with in-game gold or real money at the same prices as Hearthstone’s other card packs. Starting today and up until the expansion is released, eager treasure seekers can pre-purchase Kobolds & Catacombs card packs in a special 50-pack bundle for the price of 40 (one purchase per account) and receive the sparkling, jewel-encrusted “For the Hoard!” card back for free!

In Kobolds & Catacombs, Azeroth’s boldest adventurers will embark on an unforgettable expedition inspired by the classic fantasy dungeon crawl. Players will delve deep into the vast underground caverns unearthed by those notorious, pesky Kobolds, where they’ll discover all manner of treacherous traps, long-forgotten monsters, and glorious treasure with 135 new cards to collect.

The Kobolds have been digging beneath Azeroth for thousands of years, and along the way they’ve discovered ancient artifacts—and terrifying monsters. Intrepid explorers who fully explore the dungeons will surely discover treasure beyond imagination . . . if they survive! Dungeon Runs are a new single-player mode coming with Kobolds & Catacombs where you’ll defeat dastardly bosses and collect their loot to build a deck that will keep you alive as you go deeper and deeper into the catacombs.

COMPLETELY FREE – No purchase required; build a deck worthy of a hero with cards you find along your run.

It’s not safe to go into the catacombs alone! When a card with the new Recruit keyword is played, a random minion from your deck is summoned to fight alongside the rest of your party!

Gather your party—Kobolds & Catacombs will launch this December.

BlizzCon 2017 will also feature the Tavern vs. Tavern finale featuring teams from The Cave in Fairfax, Virginia and the Razerstore in San Francisco, California.

The Hearthstone Championship Tour (HCT) is the definitive competitive Hearthstone experience, and expanded in 2017 to include larger events, deeper prize pools, and even more opportunities to compete. HCT 2017 aligned with the Standard year and Hearthstone’s newest expansions, Journey to Un’Goro and Knights of the Frozen Throne. Players earned points from Ranked Play and tournaments to qualify for our regional Season Playoffs, where the top four competitors from each of the Americas, Europe, Asia-Pacific, and China would qualify to the Season Championship. The top four players from each Season Championship—as well as the top four HCT Point earners of 2017—will compete at the HCT World Championship in January 2018.

New for 2017 were the Hearthstone Global Games (HGG), with a total prize pool of $332,000 USD. Forty-eight countries voted for representatives to join their teams of four players, who then battled it out over the spring to advance to the elimination bracket this summer. HGG culminated in spectacular fashion at gamescom 2017, where the top four teams—the United States, the Czech Republic, South Korea, and Ukraine—duelled on stage for the title of best nation in Hearthstone. In an impressive display, the Czech Republic took the title, and their talented team won the $60,000 USD first-place prize.

Stay tuned to DYEGB for all the latest Hearthstone & Esports news!