Something which we don’t really talk about often is displays. Whether it be a monitor or a TV, a good display is vital to a pleasurable gaming experience. Recently I’ve been spending some time trying out two monitors thanks to the folks at Alienware. The two models are on virtually opposite ends of the spectrum, the first being focused on high refresh rate gaming, while the other offers an ultrawide aspect ratio of 21:9 at a high resolution. Both these products deliver quite enjoyable experiences, but also have a medium-to-high price of entry. We’ll start with the high refresh rate monitor.

The Alienware AW2518HF is a 25” 16:9 monitor that sports an impressive refresh rate of 240Hz, a resolution of 1920×1080 (1080p) and a response time of 1ms. For the uninitiated, a TV or monitor’s refresh rate is how many times in a second a panel can cycle and update its buffer. The general rule of thumb is that the refresh rate is the maximum number of frames per second that can be delivered on to a screen. You don’t really want to go higher with your framerate than your display can handle because that is when you begin to reliably encounter screen tearing (where you see a distinct line in the middle of a display which distorts the image as a whole). This is caused when a display is given more frames than it can process and display, so in an effort to keep up with the information being fed to it, it skips some frames and the slight variations caused in those skipped frames means that there are essentially two entirely different images being displayed at once. 240Hz is an insanely high refresh rate, and if your rig can crank out framerates close to that it offers an incredibly smooth experience. Even navigating Windows 10 at that refresh rate is enjoyable as simple movements like cursor movement and dragging windows has a certain level of clarity just not found otherwise. Of course, the main benefit of a 240Hz panel is being able to run and display games at much higher framerates.

Running games at higher framerates (while of course taxing on the hardware) gives players updated visual feedback at a faster rate, allowing them to react to situations more quickly. There were only a handful of games that I could get running even remotely close to the AW2518HF’s refresh rate, with Warframe and Rocket League being the two predominant ones. After getting some extensive time with Warframe, while not exactly a competitive game that demands the highest framerate possible, I found that the bump up to 240 frames per second allowed for more responsive gameplay and a much cleaner overall image.

The Alienware AW2518HF’s overall build quality is excellent, featuring a bezel smaller than the amount of content in Destiny 2’s first DLC Curse of Osiris (impressively small). The monitor uses a TN display panel, which allows for some impressive colour accuracy but isn’t quite as good as an IPS display. It also features support for AMD’s FreeSync which is an adaptive synchronisation technology that helps reduce potential tearing, stuttering, and other performance-based anomalies. FreeSync is free to use and royalty-free, which also means that there is not an increased production cost which would inevitably be offset to the consumer. However, Nvidia GPUs use their own proprietary adaptive sync technology so users with those cards are unable to capitalise on this. On the console front though, the Xbox One is actually compatible with Freesync, so for people who use both PC and Xbox this can be a rather compelling purchase proposition. In terms of connectivity, the AW2518HF features two HDMI ports, two USB 3.0 ports, one DisplayPort port (always feels weird saying that), one USB upstream and one USB downstream port and a headphone jack. The monitor doesn’t seem to have any onboard speakers.

Now let’s move on to the other monitor that I’ve been using recently. The Alienware AW3418DW is a 34” curved ultrawide monitor which sports a resolution of 3440×1440, a response time of 4ms, a refresh rate of 100Hz (overclockable to 120Hz) and uses an IPS panel. Right out of the gate, it falls short of the response time and refresh rate offered by the AW2518HF. However, it manages to hit that sweet spot of high pixel density, ultrawide resolution whilst also maintaining a fairly high refresh rate. Now if you want to run this monitor at full resolution at any form of refresh rate close to what it can do you’ll need a fairly decent rig. My build consists of an i7 7700K with a 1080 Ti so running it was not really an issue, but lower-end PCs might struggle. You can always lower the resolution to something like 2560×1440, but for that, I would recommend getting the cheaper variant (AW3418HF) which has that resolution and FreeSync, whilst also having a higher refresh rate. 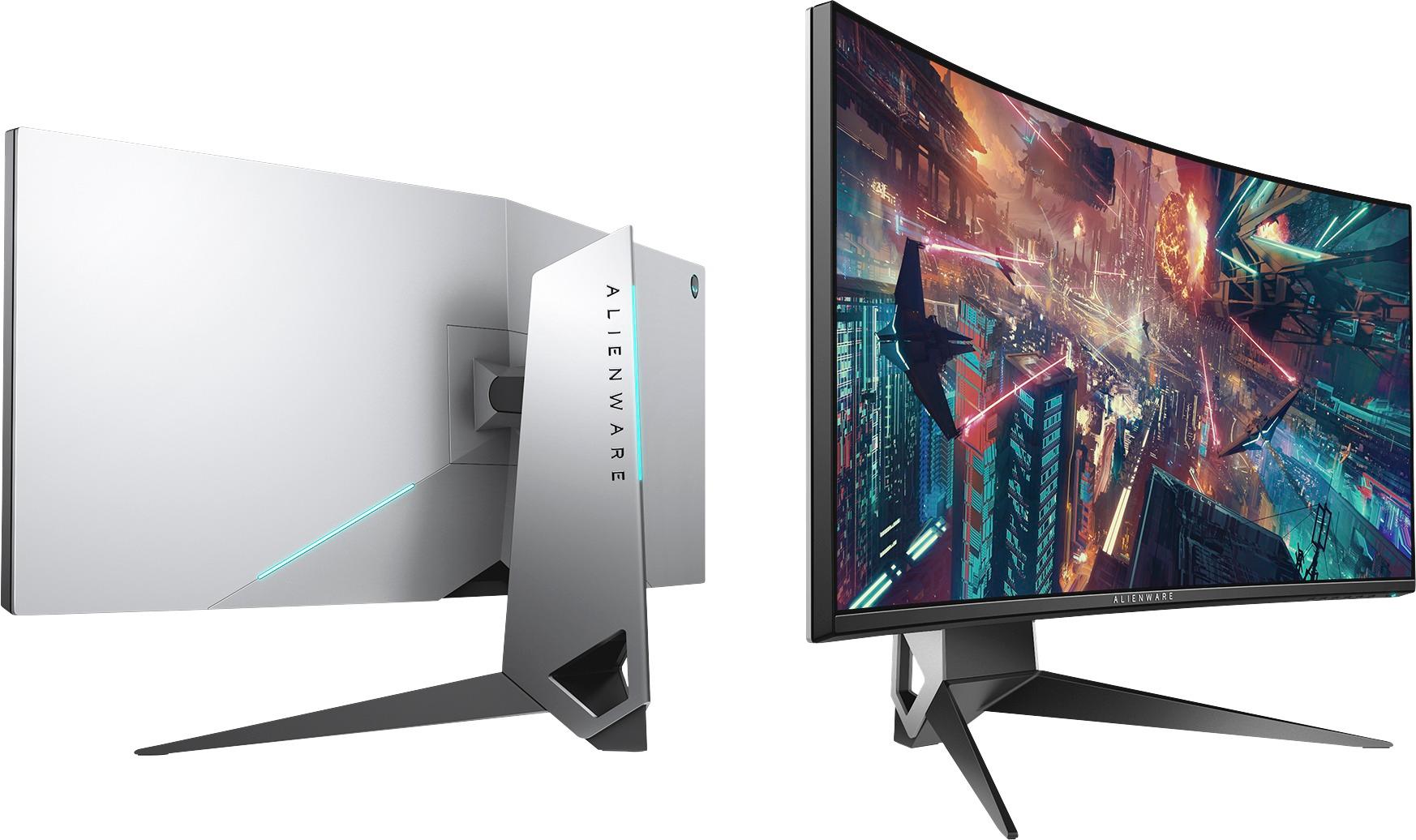 This was my first time really getting hands-on with an ultrawide display before, so my question going in was: what’s so good about ultrawide? Well, after spending some time with this monitor I can safely say that the ultrawide aspect ratio is superb. There were many benefits that I felt from using this panel, and they didn’t all pertain to gaming. For example, given how long Microsoft Word stays open on my computer, the ultrawide aspect ratio meant that it was very easy to see larger documents without having to scroll through multiple pages. While I understand this does not sound like a lot, it actually makes a huge difference when it comes to workstation-based stuff. It also allows for multiple windows to be open without crowding the UI as much, which was very welcome as sometimes I needed to work on documents whilst also having source material open.

But let’s be real, you don’t care about that. You’re looking at a gaming monitor for…well…gaming. The ultrawide aspect ratio can leveraged in a variety of ways in games. Rocket League is a good example of utilizing the 21:9 aspect ratio so, instead of having a really skinny screen for each player using horizontal split-screen, the vertical split screen option becomes viable with more usable screen space for each player. Overwatch, Destiny 2, and Warframe are all games that really benefit from the extra screen space, too. Due to the wider field of view, I was able to see attacks coming from a wider angle, something which was especially helpful in high-level Warframe content where dying because of off-screen enemies is very easy. With Destiny 2 I even found myself playing the game with the HUD disabled just to take in the beautiful art that the game brings with it. Plus the wider field of view helped make up for the lack of a radar, letting me see threats without the need to move or pan my view as often. I don’t normally value resolution so much, but 3440×1440 really hit that sweet spot of performance/resolution for my build. Running games at that resolution is taxing on hardware though, so do keep in mind that your build may not necessarily be able to run every game at 3440×1440.

Much like the AW2518HF, the overall build quality is quite solid (and believe me when I say that it is not light). While there are thicker bezels than the 25” monitor, they’re still small enough that they are not really intrusive. The AW3418DW has similar connectivity to the 25” monitor, however it does come with a couple more USB ports. What should be noted with both monitors is that they appear to have no onboard audio solution, or at least I could not get it working, so you’ll have to provide your own (whether it is speakers or headphones). Also be aware that you’ll pretty much need to use the DisplayPort cable as when using HDMI I was only able to run the monitor at 50Hz.

So what’s better? The AW2518HF’s refresh rate or the AW3418DW’s resolution? It’s hard to say, there are benefits for both. Competitive games like CS:GO and Rainbow Six: Siege benefit majorly from higher framerates as it allows players to react faster to situations in games, so I would say that this is more beneficial to a competitive player than the wider FOV that comes with the ultrawide monitor. You also get a certain level of clarity in games that is unrivaled with lower framerates. The flexibility of being able to properly support virtually any reasonable framerate (a lot of physics-based games cap out at around 200fps) is something that PC gamers will definitely get a kick out of (and even Xbox users benefit thanks to support for FreeSync). The AW3418DW on the other hand is a much harder sell at $2099 AUD, around three times as much as the AW2518HF. Console players won’t feel the benefit of the ultrawide resolution or G-Sync support, it has a lower framerate and neither monitor comes with its own audio solution. Personally, I would choose the ultrawide monitor purely based on the fact that I have the hardware to capitalise on the inclusion of G-Sync and properly support its resolution. While I thoroughly enjoyed playing my games at high framerates, I’m not someone who competitively games, so a lot of the benefit was lost on me (though 240fps Warframe is a beautiful thing). Naturally, like most things, this comes down to what you are looking to get out of a monitor. $2099 AUD is a lot to spend on a single monitor, even if it is one as nice as the AW3418DW. If you are looking to splurge a little without taking out a small loan, I would say the AW2518HF is the way to go. $700 is still a lot but you get a very high refresh rate, very quick response time, a nice display, a plethora of input/output ports, great build quality and a stable stand that also acts as a cable management route. The inclusion of FreeSync also makes it incredibly viable for Xbox users and PC users who have an AMD graphics component. If you fit within the use case, the AW3418DW is a great display, but for the majority of our readers, the AW2518HF gets my recommendation.