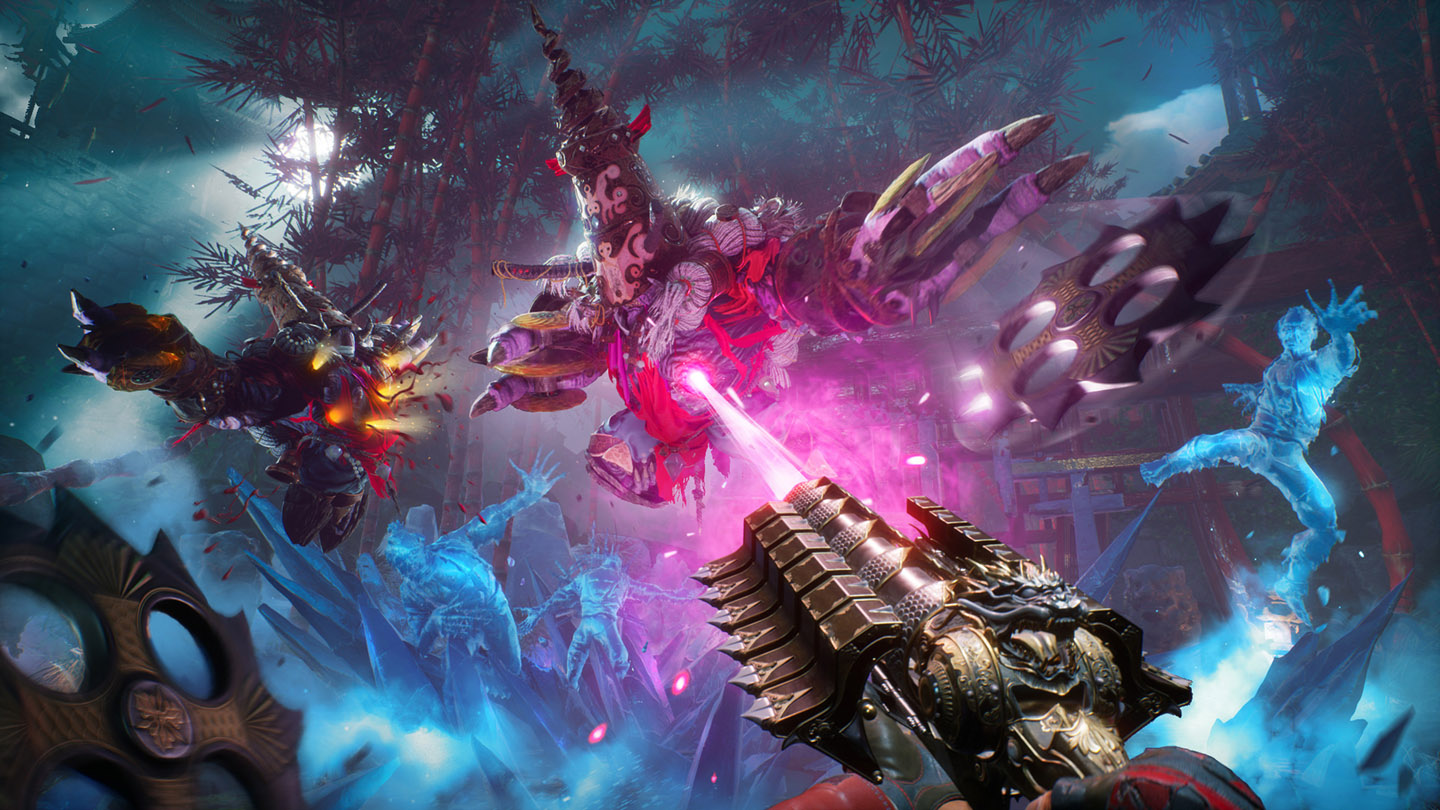 Shadow Warrior 3 is fast approaching its release date and oh boy does it look like a wild ride.

That is definitely thanks to the talented folks at Flying Wild Hog, who have managed to take a classic DOOM clone from the 90s and forge a new identity for it.

In anticipation of it hitting shelves and nesting in our hot little hands, I got the wild opportunity to talk to the Lead Game Designer on the title, Paweł Kowalewski – picking his brain about movement in shooters, why grappling hooks are awesome and whether it’s more important to kill with skill, rather than style.

WellPlayed: What drove the decision to add in such a rich variety of new movement options for Lo Wang? Is it a general trend amongst the more action-oriented shooters to just dial up player movement to a new level?

Paweł Kowalewski: Yes, I think in action oriented games it’s a common pattern that with each new instalment developers are tempted to improve protagonist mobility. However we wanted to avoid adding new movement features only for the sake of having more and more content, it was more about how we can properly depict our protagonist, show his personality through his actions. For us it all started with our perception of Lo Wang as a modern “ninja” and if you look at ninjas as shown in popular culture (especially anime), they are usually portrayed as people with movement abilities far exceeding that of even the best of athletes. So, there’s a natural progression in our rebooted Shadow Warrior games showing that Lo Wang becomes more skilled over time. These decisions also open up new paths when thinking about level design or enemies’ design as we know that with much more mobile protagonist we can make other elements of the game more over-the-top.

WP: I love games with environmental hazards for enemies – from rotating decapitation blades to massive wheeled crushers, does the team have a favourite kill-a-majig?

PK: It’s difficult to choose one, when they all are able to turn enemies into a pulp in their own unique way, but one of the hazards – a spiked wrecking ball that is able to crush and wipe out the enemies as it performs a full spin around the arena can really make you feel better after hard day at work.

WP: Having a more streamlined upgrade system seems like a relief to many – was it difficult to scale back from Shadow Warrior 2?

PK: Actually it was easier to go back to the upgrade system similar to our previous games (Shadow Warrior 1 or even Hard Reset). I mean, the system from Shadow Warrior 2 worked well within looter-shooter formula, but we knew that Shadow Warrior 3 will go back to the linear action-packed campaign and its upgrade system must be simplified in order to be satisfying, but at the same time it shouldn’t make you scratch your head for too long wondering which upgrade to choose, because it would draw your attention away from the action ahead. So eventually it was also a relief for us, knowing that we have a more streamlined upgrade system allowing us to make each weapon stand out where instead of a large number of similar upgrades we can focus on less, but with greater impact on the gameplay.

WP: I haven’t seen a grappling hook this exciting since BulletStorm, did the decision to add this fun new toy come early in development? Did it further drive encounter design once it started opening doors for players?

PK: Grappling Hook is one of the features we took out from our “Unused Ideas” folder from the Shadow Warrior 2 early development days and it was in fact one of the first things we prototyped the moment we started working on the third game. It did open the doors for new possibilities for sure, as you can now move around levels more freely in both combat encounters and traversal sections. You can also use Grappling Hook to pull yourself to lesser enemies, using them as “mobile anchor points” or you can pull explosive barrels lying around and redirect them with your Chi-Blast strike to push them straight into a group of enemies coming at you from different sides.

WP: Environment design has also ramped up in an impressive way – what research was done to implement authentic/unique Japanese environments and set pieces?

PK: The great thing about Shadow Warrior games is that they take place in a fictional version of Japan, which kept merging over the years with Chinese-looking Shadow Realm (the land of the demons introduced back in the first Shadow Warrior). This allowed us for more creative freedom, where our designs are of course rooted in authentic architecture and environments, but whenever we need to we’re not limited by the boundaries of authenticity. So long story short – we’ve made enough research to have a solid base for creating our environments, but we’re not hesitating to twist the real-life references so that they suit our vision.

WP: Every Shadow Warrior game manages to be a balls-out improvement of the last – do you ever fear that maybe Shadow Warrior 3 has set a standard that will be hard to beat in a new entry?

PK: This reminds me of the final minutes from Tron Legacy film, where Jeff Bridges’ character says that perfection is something unknowable, impossible, but at the same time it’s ahead of us all the time – and this applies to game development as well. There’s always something to improve, even if you thought that particular element was mirror-polished. It’s also quite sad, but a common thing is that certain features don’t make it into a final version of the game for various reasons, so every new project, especially a sequel to the ongoing franchise is a great opportunity to revisit those ideas in order to make the experience feel fresh once again in a sequel.

WP: Reading that Lo Wang will be modernised a little, can we still expect some of his classic one-liners in combat? How much of his backstory can we expect to explore?

PK: It wouldn’t be Shadow Warrior without some of the classic, as well as brand new lines thrown by Lo Wang in the heat of battle – there’s still a lot of that. As for Lo Wang’s backstory, we mostly focus on the new adventure and the new threat to eliminate, but there are some call-backs to the characters or events that fans of the franchise will surely remember. However we intentionally didn’t want to rely too heavily on the past, knowing that some Players will be newcomers to the world of Shadow Warrior and we don’t want anybody to feel lost.

WP: Are there any noticeable enhancements when played on a PlayStation 5 / Xbox Series X?

PK: For now the target platforms for Shadow Warrior 3 are PlayStation 4 and Xbox One, but even though there are no dedicated next-gen versions yet, you can of course launch the game on PS5 or XSX and experience even better performance and faster loading times due to more powerful hardware.

PK: Both are important, but like with any activity in life, you need to master something first, before you can go overboard by adding your own stylish flavour to it.

WP: Thanks heaps for your time. All the best with the game’s release.

PK: Thank you, we hope everybody will have fun playing it, just as much as we enjoyed working on it.

Thankfully March is right around the corner, meaning Shadow Warrior 3 can showcase all of these new toys to us in person.

A massive thank you to Paweł for taking the time to show some insight into his teams passion – we can’t wait to slip into something more ninja-comfortable and experience it all!