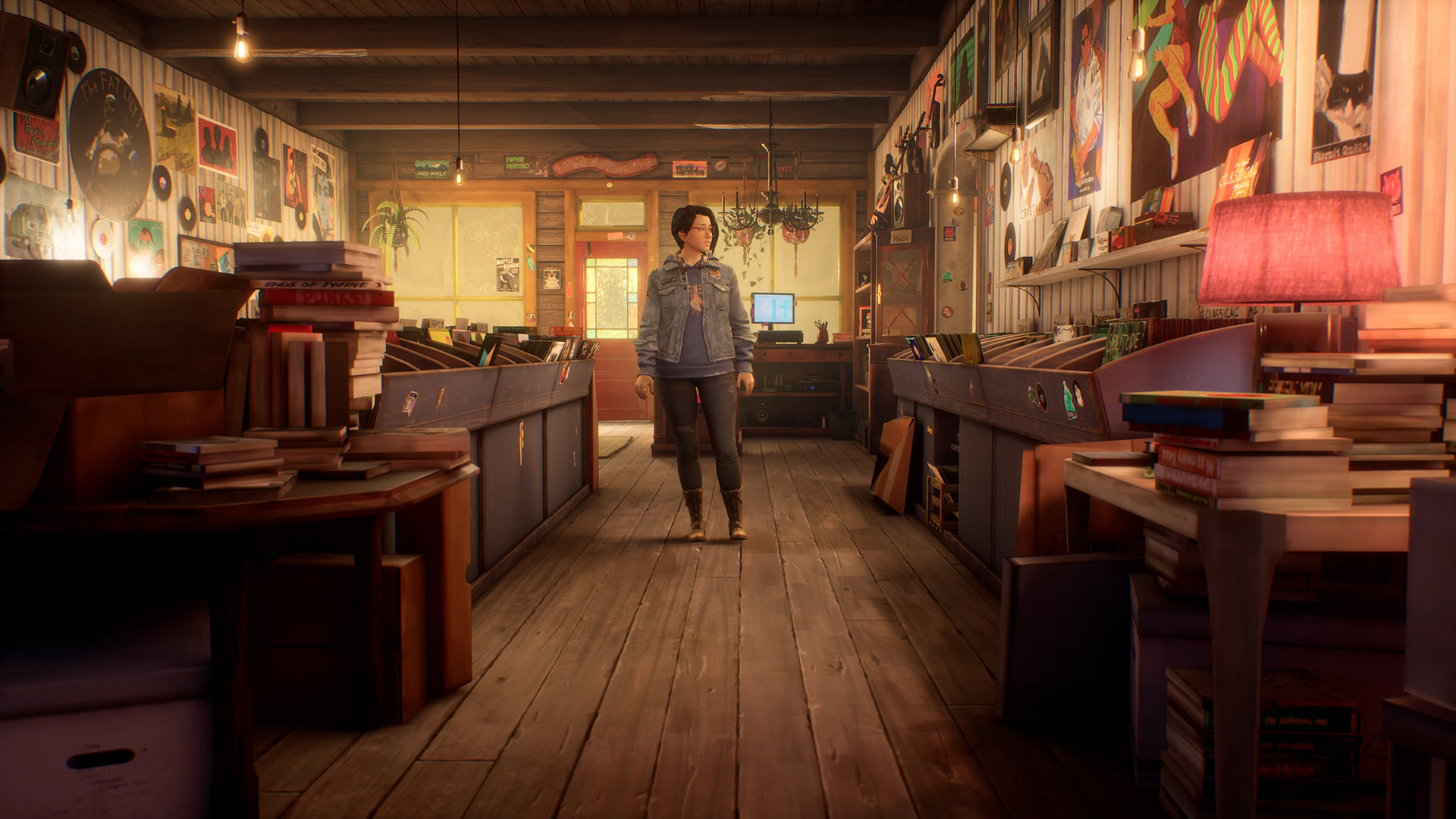 With Life is Strange, French developer Dontnod Entertainment successfully launched a choice-driven episodic narrative adventure in a market that, at the time, may have felt like it was dominated by the likes of Telltale Games. The mumblecore, YA trappings of the original five-episode game may not have been for everyone but it was a breakthrough effort that resonated with a big enough audience that the franchise has grown since. While Dontnod went on to produce the excellent Life is Strange 2, featuring an all-new story and characters, for me it was US studio Deck Nine Games’ three-episode prequel series, Life is Strange: Before the Storm, that really saw Life is Strange start to come into its own.

Aside from more matured and nuanced writing and masterful direction, Before the Storm also offered fans a chance to better know one of the original game’s key characters by shining the spotlight on them and their own personal journey. It was a chance for players to empathise with a character in a way they previously couldn’t, without the necessary context. It’s appropriate then that Deck Nine has returned to craft a brand-new Life is Strange story that tackles empathy in a way that brings new possibilities to how a story can be told in a narrative video game.

I was lucky and honoured to be able to chat with Felice Kuan, Lead Writer on Life is Strange: True Colors, as well as Erika Mori, who plays the new title’s lead character. Though time was short, I was keen to find out as much as I could about this new lead as well as the mechanics of her mysterious empathy-based powers.

When the game was revealed last month we learned that it would star Alex Chen, an Asian-American woman who is reunited with her brother, Gabe, for the first time eight years after exiting foster care in a group home. After moving to Haven Springs, Colorado to live with her brother, tragedy quickly strikes and Gabe is killed in what’s believed to be an accident. It’s here that the game’s core narrative will begin, as Alex uses her unique ability to perceive and affect other people’s emotions to uncover the truth behind Gabe’s death.

As much as that all sounds incredibly intriguing, averse to spoiling anything further I hoped that both Kuan and Mori could shed a more general light on Alex herself and how crafting a narrative in a video game where empathy is a player mechanic might even work.

“Alex is a young woman about to meet her brother for the first time in eight years. And the biggest thing weighing on her is her relationship to emotions, we have created a character who initially sees a part of herself as broken, as a curse, or describes it that way. And we take her on a journey of self acceptance and self love, understanding what is truly a gift inside of her and we watch her develop a much healthier relationship with emotion”, explains Kuan when I ask about where Alex is at in her personal journey when we first meet her in True Colors.

“I think that a big part of Alex, and then obviously the gameplay, is her power of empathy, and learning how to access that in a healthy way”, Mori adds.

“It’s a part of her, it’s something she can’t change. We don’t see her developing her power. During the game, she already has it and you know, she sees it as something that’s a curse. And I think that acceptance of this part of her that she can’t change, that she doesn’t even want to look at or acknowledge in the beginning because it’s caused her so many problems, so much tumult in her life, is a really important aspect of who she is and of the game itself. And I think it’s a theme, really, that will resonate with a lot of people, it certainly resonated with me.”

On a personal level, one of my biggest initial reactions to True Colors’ announcement and the details of Alex’s powers was the fact that, as a naturally-empathetic person myself I have no idea how actively engaging in them is going to feel. It has the potential to be a uniquely validating and relatable experience, but it could also end up being an absolute fucking nightmare, a sentiment that I shared with Kuan and Mori verbatim.

“We were already interested in how the genre of narrative adventure lets you explore empathy and how, especially in Life is Strange, the characters often have a lot of nuance and in learning a little bit more about them, you grow closer to them, and you develop a really strong fondness. So we wanted to take all of that farther”, Kuan explains, fighting back a fit of shocked laughter at the casual F-bomb I’d just dropped (sorry about that Felice, we are WellPlayed Australia after all).

“I’m very interested to see what the experience is like for people like yourself, or people who aren’t naturally empathetic. What Alex learns is the step beyond the nuance that you’ll see in other games, because she’s seeing the absolute core of these these people’s emotions, and sometimes that is very difficult. It’s certainly truthful, she’s seeing really true things about everyone else. And that can be traumatic, it can be beautiful, and it can be something that brings people really close or makes them terrified. So yeah, I am interested to see how people react.”

What Alex learns is the step beyond the nuance that you’ll see in other games, because she’s seeing the absolute core of these these people’s emotions, and sometimes that is very difficult.

It’s clear from the small amount of True Colors that we’ve seen in trailers that Alex’s powers are likely to have a radical impact on how players interact with and perceive characters in the game, but it’s also nice to see the series’ DNA still intact, especially its use of both licensed and original music to set a tone. I was curious about the role music plays this time around, especially after hearing the gorgeous cover of ‘Creep’ in the announcement presentation, with artist mxmtoon providing Alex’s singing voice in the game.

“Music is the way that Alex feels like she can safely communicate. It’s a way for her to connect that is safe, where she feels like her power sometimes sets her apart or outside of relationships with those around her. It’s really an artistic catharsis for her, and a way for her to externally communicate and emote the things that she’s holding inside.”

But it’s not just about creating interesting characters, you’ve also got to be able to bring them to life in a way that does justice to the writing or, in the case of True Colors, potentially even informs it. I ask Mori about the process of bringing Alex Chen to life, in particular the fact that Deck Nine is employing state-of-the-art performance capture techniques to bring Mori’s voice, face and body to Alex all at once. Prior to the interview I was able to see a short clip of Mori’s performance as Alex in a quiet, but emotionally raw moment that really highlighted just how big of a deal this is.

“It was really interesting and collaborative. And I mean, the only other acting that I’ve done was theatre where you have your entire body, your voice, your face at your disposal, so I didn’t really feel too much of a change. But then learning about how motion capture and voiceover has historically been separated – separate person for body, separate person for voice – gave me a whole new appreciation of the high level of authenticity of performance that we were getting”, Mori says of her first-ever video game acting experience.

“I think that the clip that was shared with you, of Alex in her exit interview, where it’s just her face is a testament to the technology and the fact that we were capturing my voice and my face and my body all at the same time and allowing those three components to tell the story, even when Alex says very little.”

“We quickly found that the most delightful or the most, like, gut wrenching moments were when Erika just reacted to something that happened or something that someone said. So we quickly got used to just seeing what happened and letting her face tell a lot of it instead of words”, adds Kuan.

A ten-minute conversation certainly isn’t enough to truly dive into a character as unique and complex as Alex Chen, or a story with as much mystery and potential as hers might prove to be, but even this small glimpse has been enough to solidify this game’s place in my most-anticipated titles for 2021.

Provided there are no last-minute delays, it’s also coming to us in full in 2021, as a complete game on day one, a change from the previous entries’ episodic release format. Though fans needn’t worry about needing to see it all through in one go. On my way out I quickly quizzed Kuan on whether that affected the way the story was written this time around.

“You can still experience it in chapters, if you like. We’ve crafted it so that there’s cliffhangers at the end of each, or you can binge it. I think for us writing it, we definitely were able to look at the whole thing and make sure that it was telling the story that we wanted to tell”.

Special thanks to Felice Kuan and Erika Mori for taking the time to chat about the game, and to the Deck Nine Games team, Square Enix and Bandai Namco Australia for the interview opportunity.