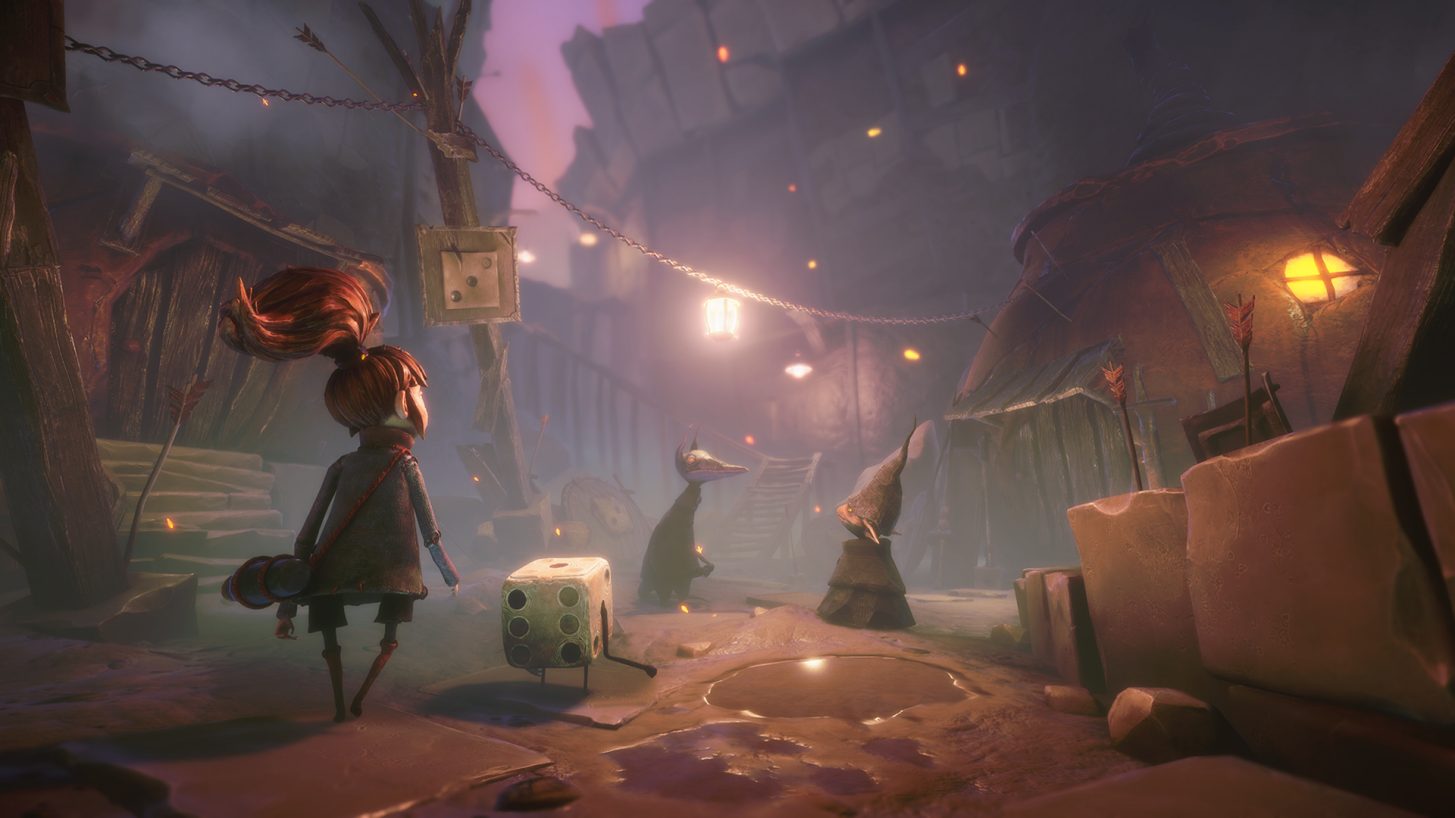 If there’s one indie video game developer that I know I can count on, it’s Zoink. I adored Fe and Ghost Giant, awarding them both superbly high scores here on WellPlayed, Flipping Death as well. Zoink is a team seemingly brimming with ideas and the talent to match and with that in mind it’s fantastic to see the studio partnering with EA Originals once again for their new game, Lost in Random. It’s an action-adventure title that draws heavy inspiration from dark fairy tales, tabletop RPGs and stop-motion cinema, which is an exciting mash-up in and of itself. After having the chance to sit down (virtually) with two of its core creators as well as get hands-on with a small portion of the game, I can predict another Zoink banger on the horizon.

Indie is almost no longer an apt descriptor for the Swedish outfit though, now a studio of 80+ people. We were lucky enough to have two of them – Head of Development, Klaus Lyngeled, and Creative Director/Lead Writer, Olov Redmalm – on hand to talk about their biggest and most ambitious project to date.

Lost in Random tells the tale of the world of Random, where an evil queen rules with the Dark Dice, an object she uses to bend the fates of each of the land’s districts and citizens with every roll. One example of this is a coming-of-age tradition where children roll the Dark Dice on their 12th birthday to determine where in Random they’ll spend the rest of their lives. When protagonist Even’s twin sister, Odd, winds up being sent to the queen’s palace in Sixtopia, she senses that there’s something sinister about what most believe to be the highest possible honour. Without spoiling too much of the why, this eventually leads Even to set off to reach Odd and rescue her sister from the queen herself. Along the way she meets Dicey, a literal sentient dice (and one that technically shouldn’t exist) to help her in a very Burton/Gaiman-esque dark fairytale.

“We started out sketching, painting, even making some figurines. We looked at a lot of art like stuff by Shaun Tan, for instance and of course, stop motion animation like Nightmare Before Christmas, which I know is a big favourite for Klaus. But it wasn’t until a painting of a girl and a dice in this giant board game world that, when that image came up, we knew that there was something there. So we had the dark fairy tale but we also had this tabletop-themed world and that opened up so many possibilities of what could this be like? This theme of randomness and a world run by dice and board games? And what does that theme mean? And what could the gameplay be? What’s too random? What’s not random enough for? And we ended up with Lost in Random.”

It’s a unique mix and one that shoots for that magical relationship between gameplay and narrative where one informs the other, and both work to impart the intended emotions and responses from players. If anyone can pull that off, it’s Zoink, as they have proven to in the past. What the studio brings each time that’s unique is the world and the presentation in which these lessons are wrapped and delivered and the world of Random seems like their most interesting and inventive yet.

“We had a tonne of fun really creating these worlds. And of course, thinking about, okay here’s a dice, and the dice becomes the centre of everything, you know? And everything spawns out of that. And of course, you also go into thoughts about what is a board game? How do we create a board game world, and what kind of themes are there around the board game? But when you think about it, the game is really about learning, you know, there’s so much randomness in the world, there’s so much randomness in your life and there’s also so much randomness in Even’s life, and she has to learn how to actually live with that. If you roll the one or you roll a two, but you need a six, then you have to live with that. And you have to actually learn how to roll with the punches, basically. And that’s kind of the emotional story that she goes through,” says Lyngeled of the themes that Zoink is hoping to evoke in Even’s story and the world of Random itself.

Those themes and the idea of randomness aren’t exclusive to Lost in Random’s narrative trappings either, as it’s got a whole combat system decked out in the same hybrid RPG/tabletop/action concepts. Even fights enemies in real-time, but with a deck of special cards and her pal Dicey, things start to get interesting.

“We’re actually really proud of this combination of cards and dice. And we spend a lot of time really thinking about how we build a gameplay mechanic that’s versatile and can be built out and just really focused in on ‘Okay, our previous game’s had a lot of narrative but with this game let’s also make sure that the game mechanics are really stable and really well done’. We’re hoping you’re really gonna love this,” Lyngeled describes.

“Yeah, I’m a huge fan of old Western RPGs. This of course, not an RPG, but with the combat of modern RPGs they do have this kind of, pause the gameplay, deploy your skills, and then hit play and watch all the chaos unfold. We wanted to put that here, straight into the world. So the player sees it, Even sees it, Dicey does it. It’s not something that happens behind the curtains. It’s there in the game world. And that’s what we wanted to explore.” adds Redmalm.

Actually going hands-on with the game pretty much solidified all of the above for me, proving that Zoink absolutely has the chops to realise their vision for Lost in Random. Playing on PC with an Xbox Wireless Controller I noticed a couple of things immediately – namely that it offers ultrawide support (yay!) and that it looks and feels phenomenal. That stop-motion aesthetic mixed with a gorgeous, almost tilt-shifted depth of field effect really makes the world of Random feel like a magical place beyond places, almost a mix of Laika’s brilliant Coraline and something like Little Nightmares II.

Starting from the game’s opening and working my way through a couple of its unique districts I was able to get a good taste of both general exploration and combat, and get to know some of its…interesting characters. Despite being a mostly-linear experience there’s plenty of room for Even to stretch her legs and converse with the citizens of Random as well as look for hidden secrets, something I had to repeatedly tear myself away from doing lest I spoil too much of the final game for myself. It helps that Even controls superbly, and the environments are wonderfully twisted and fun to poke around in. Most NPCs are good for a chat, and you’ll often get the opportunity to choose how to respond to them. It’s a grimy, gloomy world full of grimy, gloomy people but I’ve already got a couple of favourite faces. I’ll leave those as a surprise though, I think.

Before she meets Dicey, Even’s slingshot helps her strike breakable objects to collect currency as well as shoot targets and solve basic puzzles, but once the pair meets her arsenal and repertoire are expanded and she becomes something of a formidable force. Lost in Random’s combat takes cues from action games, board games, RPGs and deck builders and mashes them up into something that’s surprisingly intuitive and playable for such a complex blend. As Even rushes enemies or shoots them with her slingshot they drop energy cubes, which add special cards to her hand that grant items and abilities to use in battle. Dicey factors in as kind of a combination skill check/mana pool where rolling grants a certain number of tokens to spend on the cards in your hand

Early on this all feels really good, and despite Dicey and Even only possessing their most basic abilities at this stage in the game there’s a level of excitement that comes from the, well, randomness of it all that gives it a unique flavour. I’m keen to see how combat develops over the course of the game and what surprises Zoink, known to throw idea after idea into the mix as their games go on, has in store. That sentiment about throwing all those ideas typical to Western RPGs that generally happen in an abstract way to what’s actually going on and making them happen in the world itself rings true in practice, at least in as much as I was able to play thus far.

Just this small taste has taken my excitement for Lost in Random to the next stage, and being able to hear from the team at Zoink themselves just solidifies the level of talent, creativity and passion behind it. September is a stacked month for games no matter what you’re into, but I implore you to keep an eye on this one (and on our full review closer to launch) because it has all the makings of a classic.