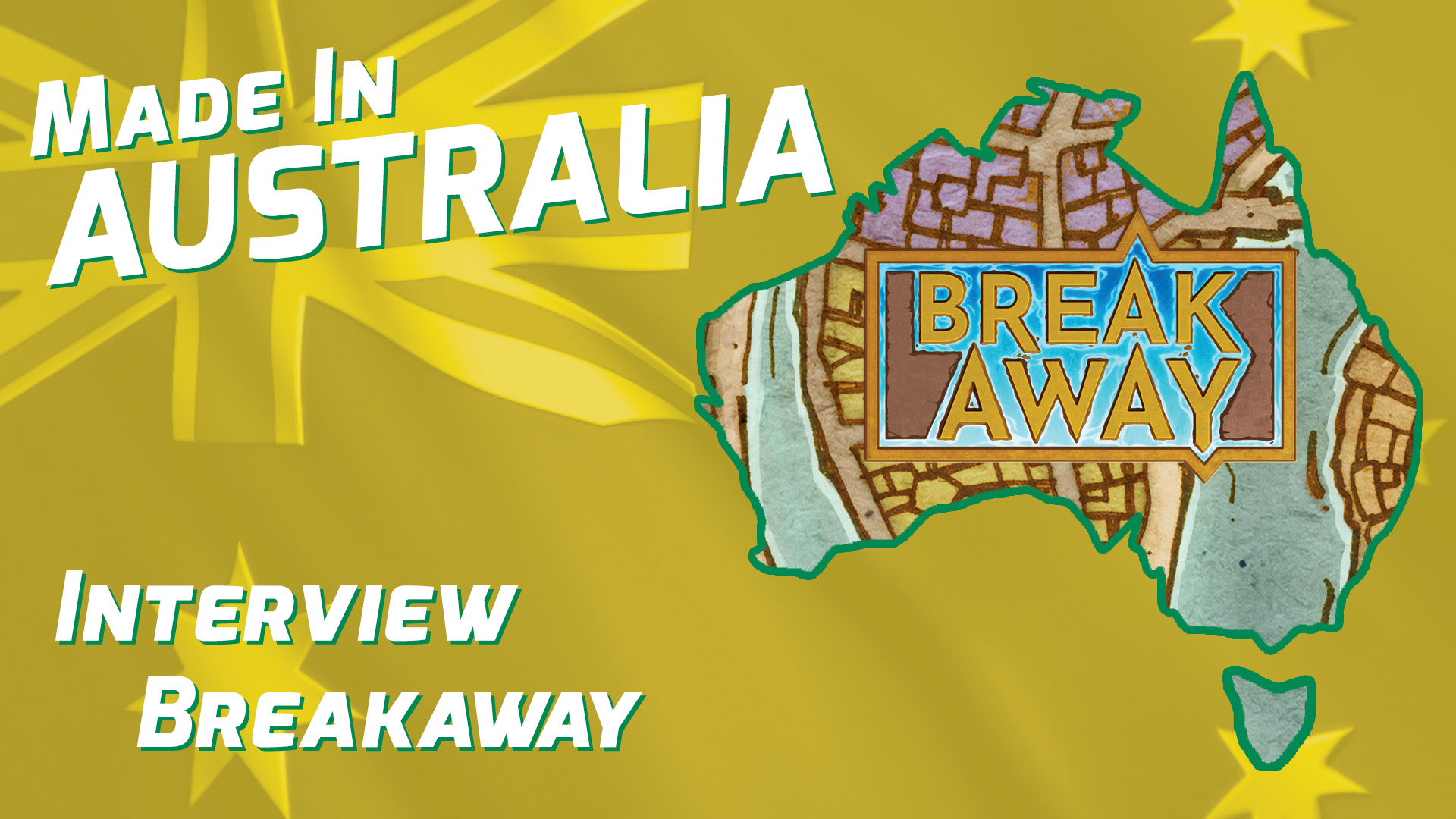 2020 is a new year – a new decade, and this year we want to expand our horizons beyond the discourse of video games, which is why we’re kicking off our Made In Australia segment for 2020 with coverage of an Australian-made tabletop RPG.

We’ve loosely covered tabletop RPGs in the past, and while they may not be as sexy to report on as video games, one only needs to look at the tabletop section at PAX Australia to realise there’s a massive playerbase for the platform. I personally find myself captivated by the amazing artwork featured in these types of games, whether it be the character design or box art. Plus the concepts for some of these games are super intriguing.

One such TTRPG that has caught our eye is Breakaway from Sydney-based outfit Empathy Games, which aims to bring elements such as fantasy and tech and weave them into one serious yet silly experience. We sat down with Empathy Games’ founder, director and all-round powerhouse Felicia McEntire to chat about Breakaway and find out what sets it apart and why fans of TTRPGs should be excited.

WellPlayed: Thanks for taking the time to chat with us. Firstly, what is Breakaway all about?

Felicia McEntire: Breakaway is a semi-modular tabletop roleplaying game. It’s science-fiction-meets-fantasy and magic versus tech. It’s a study in what makes us human, or what gives us a soul. It’s also a terribly silly game.

WP: How long has the team been working on it?

FM: This is a way more complicated answer than you’d think. The setting of Breakaway started around 10-14 years ago in a character’s background. I wish I could pinpoint it better than that! The idea to turn it into its own system started in friend’s living room in early 2018.

WP: Is Breakaway inspired by any other tabletop games?

FM: Yeah, a lot! I enjoy how Monster of the Week has a fail-forward system. Edge of the Empire’s Triumphs & Despairs really appeal to me. Blades in the Dark has a great mechanic where you can spend a coin and get a flashback for your character. I enjoy D&D’s 5.0 backgrounds. In fact, me being fed up with D&D in general is what led me to make the Breakaway system in the first place.

WP: Is Breakaway scalable for different group sizes? What is the ideal group size?

FM: It is, in a way! Because tabletop RPGs are different from board games, scaling can be an issue for different reasons. The best group size would be 4-6 players. 2-3 players is doable, but any games would go very quickly and may put strain on the CA. Above 6 players would mean sessions would drag on for a while. This is common for most tabletop RPGs.

WP: How long does a playthrough of Breakaway take, or expected to take?

FM: How long is a piece of string? The way I run my sessions, games are about 3 hours. If we have all day, then sessions can last for 6+ hours. I have written an hour session for playtesting at PAX AUS, which worked well as a one-shot.

WP: In broad terms, what makes Breakaway different from other TTRPGs out there?

FM: I haven’t seen Breakaway’s level of customisation before. You start as person in a Culture with two Backgrounds. You can trade, buy, or barter for things like night classes, genetic splices, robot parts, a new set of wings…really, anything. Breakaway is about choice and how to progress through choices as much as it is about playing the game and having fun.

The Charter system is a way for your characters to earn money from day one and works like a hideout or base of operations.

Shuffling Anomalies temporarily chop and change realities – some local, some widespread. Every session, the magic in the air introduces a simple change that won’t impede or change your goal, but it will introduce challenges. You can introduce anomalies based off the genre of game you’re playing, too!

I know you said “broad terms” so I apologise for drawing this part out, but there’s quite a bit that makes Breakaway different!

WP: Can you explain the modular nature of Breakaway a bit more?

FM: Yeah! It’s a strange thing to say, but Breakaway was created to be used in chunks. If you don’t like the spell system, you shouldn’t have to use it – or deal with it. If you’re not keen on the breakthrough/setback dice mechanic, drop it. The only things you absolutely need to play the game is one Culture, two Backgrounds, and a set of dice. You can ignore everything else.

WP: How accessible is Breakaway for first time GMs and players?

FM: I have playtested Breakaway only with people at conventions, which have been a real mix. I had a group of 10 come through that had never played before. It was an incredibly fun time for me seeing what an entire group of people could do with a system – especially not being familiar with tabletop games at all. I struggle with finding new GMs/CAs to run a game. That’s likely going to be one of my next focuses is finding people who are keen to try it for the first time – and fresh eyes on the rules is always helpful.

FM: Five six-sided dice (often called d6s), a character sheet, and a pencil. That’s it! I’m working on a PDF version of the character sheet so players can store information digitally.

The best feedback I’ve had so far is that the world feels like it’s real and alive – “living and breathing”. I loved hearing that.

WP: Breakaway has a rich and varied lore, what inspired the exotic settings and character races?

FM: I won’t bore you with the ridiculous amount of text I have for this, but the planet you and I live on has wildly different biomes and startling beauty. A place as strange and magical as the Breakaway setting should have at least as much variation!

I opted to not call groups of people “races”. One of my main gripes with D&D is the idea that one “race” is better than another just because of how they were born. Instead, I use Cultures to explain how a person is shaped – foods they grew up with, clothing they might wear, what styles may be in fashion, etc. I did a whole lot of research on robotics, genetic splicing, animals, and coding to come up with potential Cultures. A lot of fun, I didn’t expect to learn as much as I did!

WP: Do you have any plans to expand the Breakaway universe into other media? (Books, Podcasts etc)

FM: I would love to expand Breakaway into other things. If you’ve seen the artwork by Josh Wright, then you’d know it’d be a shame to let it just sit in one book and not go anywhere else. He’s got a real talent for painting colour and action. I also would be keen to start a live-play podcast where people would play, and I would occasionally talk about working on Breakaway.

WP: Other TTRPGs are often used to generate homebrew campaigns, do the mechanics of Breakaway allow for that?

FM: Hell yeah it does. I have an entire section dedicated to making your own Cultures, Backgrounds, countries, city areas, and so on. Players come up with some of the most unique creations. I love that and made Breakaway with that in mind.

WP: Have you had much player feedback? Has playtesting yielded positive feedback?

FM: I’ve had heaps of feedback, but unfortunately most of it has come from friends! I would be quite keen to get feedback from people I don’t know at all. People who wouldn’t be afraid to hurt my feelings. People who want to try a TTRPG for the first time. I need all kinds of playtesters!

I’ve received a lot of positive feedback, people really enjoy the setting. The best feedback I’ve had so far is that the world feels like it’s real and alive – “living and breathing”. I loved hearing that.

WP: Do you have an estimated release date or window?

WP: Have you considered adding a digital element to Breakaway? Similar to Nightmare’s use of the VHS back in 1991?

FM: I am so excited you mentioned Nightmare!! Nightmare is one of my favourite boardgames, it was so silly but genuinely fun. The idea that you could be playing along, old mate would pop up on the screen, scare the bejesus out of you, and the tide of the game would turn. That stuck with me.

I think there are places where digital elements could be helpful in mundane ways – like the character sheet PDF – but I imagine there’s ways to insert technology that I just haven’t thought of yet. The shuffling anomalies mentioned earlier could be a potential entry point, alerting when something nearby would change. I should have a think on that.

WP: Thank you for your time and good luck with the rest of development.

For more information on Breakaway you can check out the game’s official website.