Mario Kart 8 came out three freaking years ago. It feels like just yesterday I was hurriedly organising ownership of a Wii U to play the game, because the truth is I wasn’t in any rush to buy the Wii U prior to the game’s release. But Mario Kart 8 changed that. There are stats to indicate that the system’s mild success owes a lot to the 8th incarnation of turtle shell warfare, so when I discovered that the first Mario Kart game to grace the latest and greatest Nintendo hardware would be a souped-up version of Kart de Mario Ocho, my reaction was nothing short of “Hell yes – a game so nice they’ll release it twice.”

Dry Bones is finally back as a playable character. Expect him to feature in this review extensively, because I love this dude.

So what does Deluxe bring to the table? Firstly, the game is sexed up, visually. On the Wii U the game was already impressive for the dated/anemic hardware, but throw in a healthy dose of 1080p and 60fps and you are in for an eye-blistering eyeball extravaganza. The game is stunning in every way you could imagine, with crisp easy-to-read visuals ensuring that you are aware of every minute detail. Every track is meticulously designed to be unique from all others, and each racer is modelled beautifully, with a range of charming animations to fill them with the personality you’ve come to expect from decades of Nintendo titles defining them.

Even the UI is clean and simple, perhaps attributed to years of iteration (the original Super Mario Kart was released in 1992) alongside the ability to iron out and wrinkles from the original release. While it might seem minor, I have always been a huge fan of the menus in the game. This is due in part to a few releases in the last year or so deciding to go off the deep end with whackjob menu design, and it’s refreshing to get back to basics with clean and intuitive navigation. A minor gripe, and I need to stress it’s minor, is that some of the new player preference toggles are perhaps not as well documented as the could be. This includes things like auto-acceleration, motion control steering and steer assist, but more on those later.

The gameplay of Deluxe is classic Mario Kart, tight as a drum with the few required mechanics present and accounted for

Deluxe also includes all of the DLC from the game’s previous release, such as racers and tracks – though this is a fairly obvious inclusion. Beyond this however, there is also a healthy amount of additional content. New racers include Splatoon’s Inklings, King Boo, Dry Bones (as my personal favourite character, he should have been in the original game) as well as Bowser Jr. There are also some minor gameplay tweaks, such as the ability to now store up to two powerups during races, so you can better keep a trick up your sleeve. This is coupled with the new ‘double’ power box up that appears, which encourages some interesting gameplay elements by tempting players to deviate from the most efficient route on a track in the hopes they get some offensive tools to aid their cause.

Hey, you doing anything later?

Next up is the new and improved battle mode! Mario Kart 8’s greatest shame was that its battle courses were shoehorned race tracks that encouraged more offensive gameplay. Though this was fun for a while, it did not capture the same frenetic action that previous M-Kart games had. Shooting around a smaller arena-styled track, balloons tacked onto the back of your buggy, as you stalked your brightly coloured prey was an activity that helped define my younger years. The cries of ‘STRAY GREENIES’ from my siblings still echoes in my ears, as stressful images of careening green shells bouncing madly off walls towards me flash before my eyes. Deluxe delivers on this nostalgia, with a revamped set of options to play the game mode – but more importantly – a set of unique battle arenas.

These arena-style courses completely reinvigorate the act of kart-based deathmatch by getting rid of the ‘catch me if you can’ aspect of playing the game mode on race tracks. Seek and destroy is a great deal more fun when the seeking is done across a more open space, with nooks and crannies provided to either seek shelter, or lie in wait for your prey. The arenas themselves are also a great trip down memory lane, with the original SNES style arena present, alongside tracks such as Luigi’s Mansion and Splatoon’s Urchin Underpass – complete with accompanying soundtracks!

The gameplay of Deluxe is classic Mario Kart, tight as a drum with the few required mechanics present and accounted for. You can still powerslide around corners for a boost, do tricks over jumps…for a boost…and drift behind other players …for a boost. There’s a lot of boosting to be done. This also means the infuriating, but necessary evils for those of us who may find ourselves in pole positions are also present – including the dastardly blue shell. Though it is a nightmarish spectre of what could have been, haunting the dreams of any who dared to try, I understand its purpose and cannot remain angry at it. Plus, a particularly skilled player can avoid it, which loosely means I have a metric for how terrible I am at the game, given that I have managed to dodge it precisely once out of countless hair-tearing situations over years of play.

This brings me to a big gameplay element that has found its way into the title – the option for steer assist. Visually represented as a little antenna that attaches to the rear of your vehicle, this player preference provides a form of safety measure to the occasional mistake wherein you find yourself flying off the track, either by mistake or malicious intervention. Working a little like bumper lanes in ten-pin bowling, this little beauty will gently coax you back towards the track at a time you may approach your impending doom. Initially I did consider it to be somewhat of a crutch, as it took the danger out of those tighter corners that seem to exist solely to devour your coins and your lead. All it took was an evening spent with my wonderful niece and nephew to see where the feature really started to shine. In times past, I would need to be very particular with the choice of track, or even speed class, to try and ensure that the gameplay experience for them didn’t end up being frustrating. But with the steer assist option, they could now play on essentially any of the tracks with little worry. It is a pitfall of many gamers to judge any gameplay element from your own point of view, but seeing it from their perspective opened my eyes to just how beneficial it was. I have no desire to walk in their shoes (as they are far too small), but their happiness is more than enough for me. Plus, if you want to feel like a hardcore badass, you can turn the feature off (it is currently still turned on for me. I swear I keep forgetting to turn it off…really). 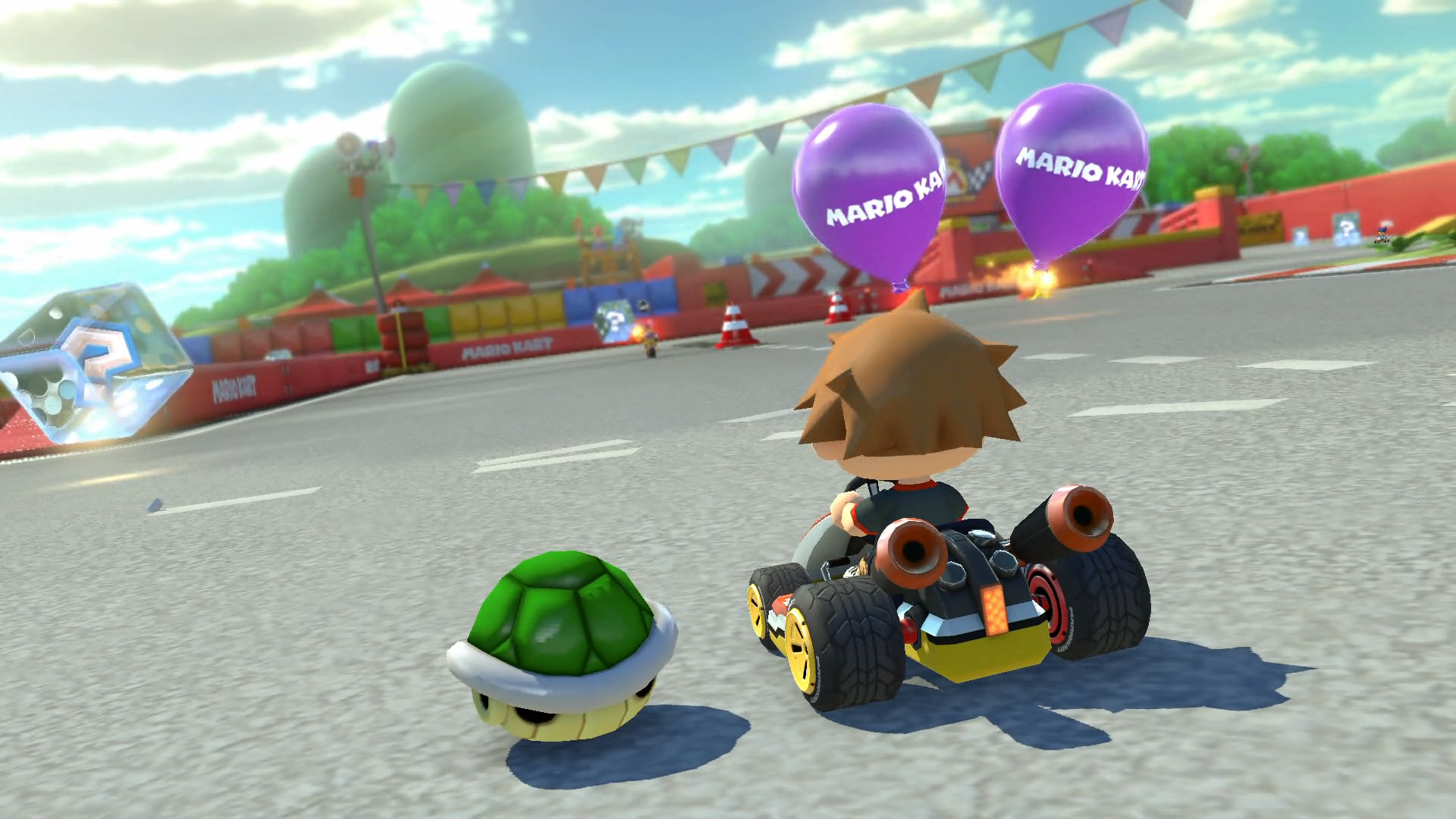 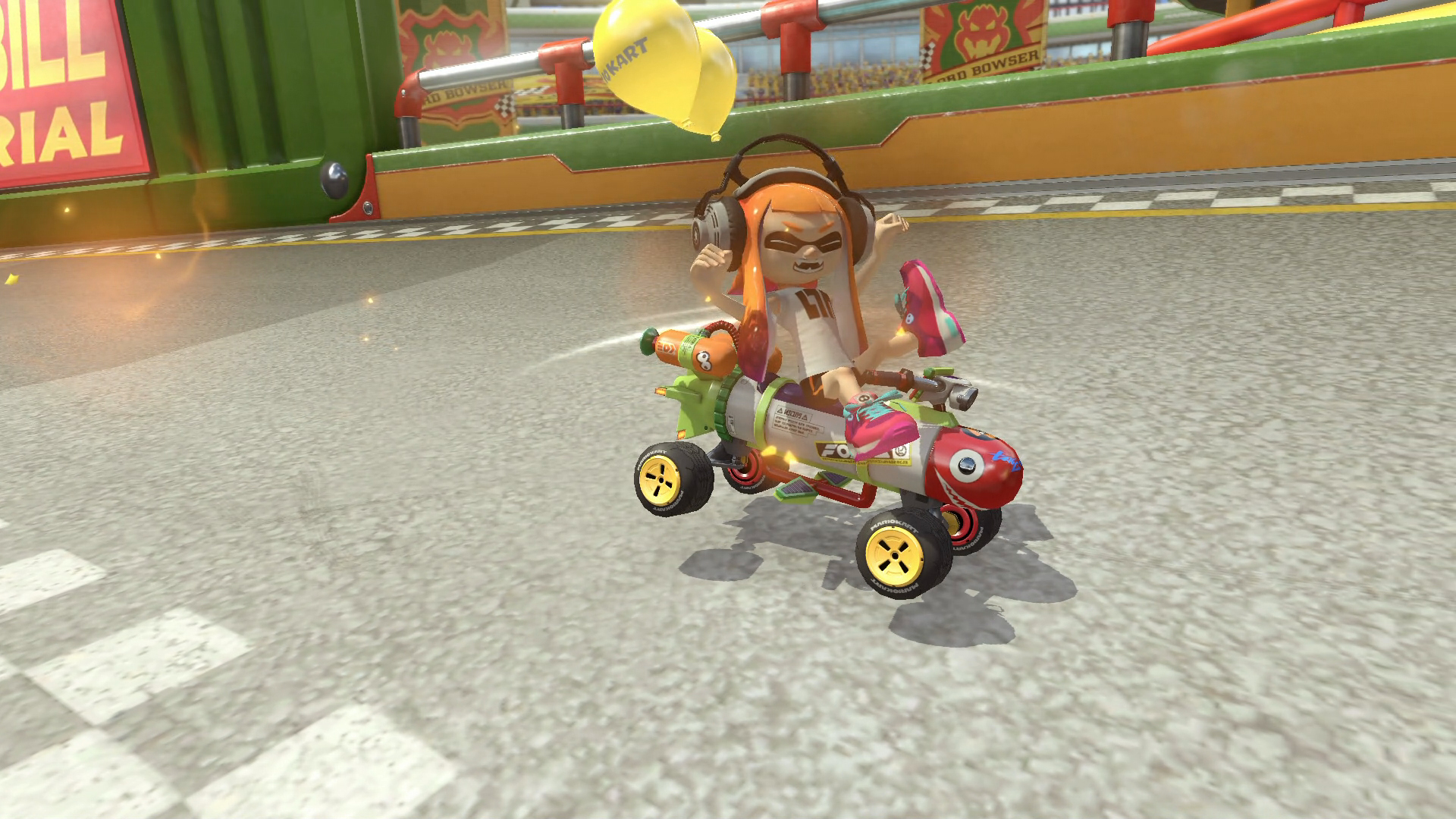 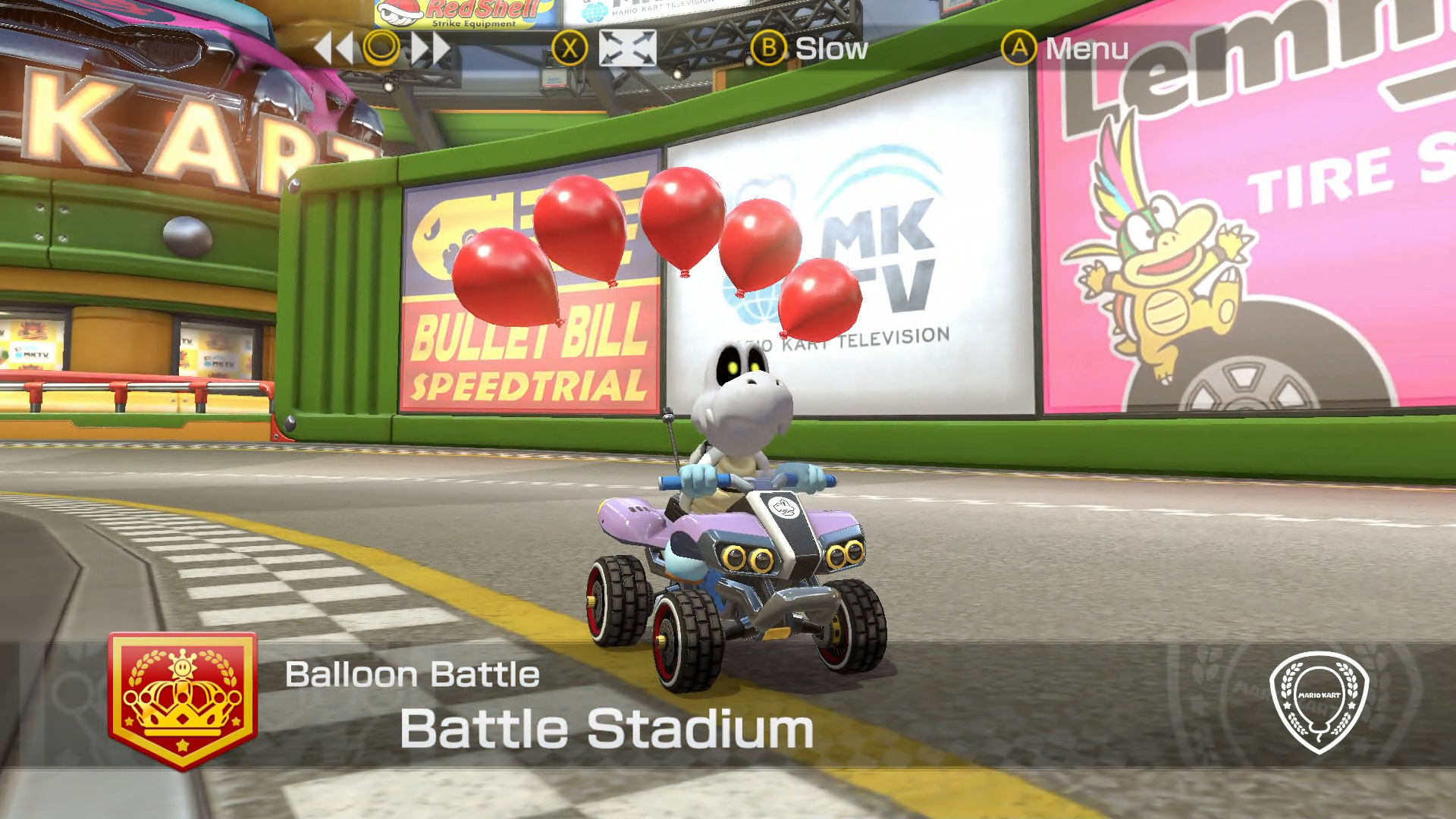 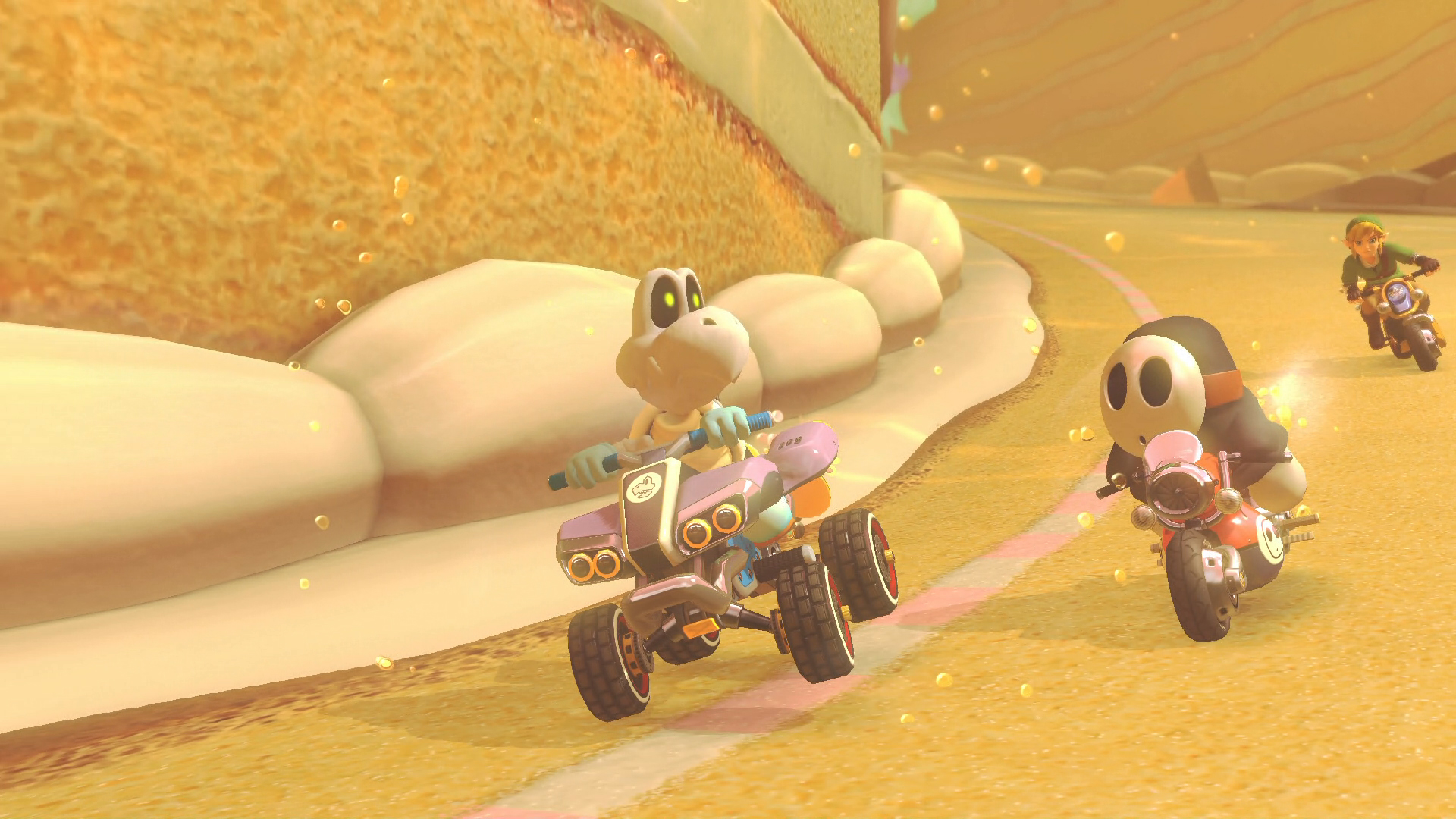 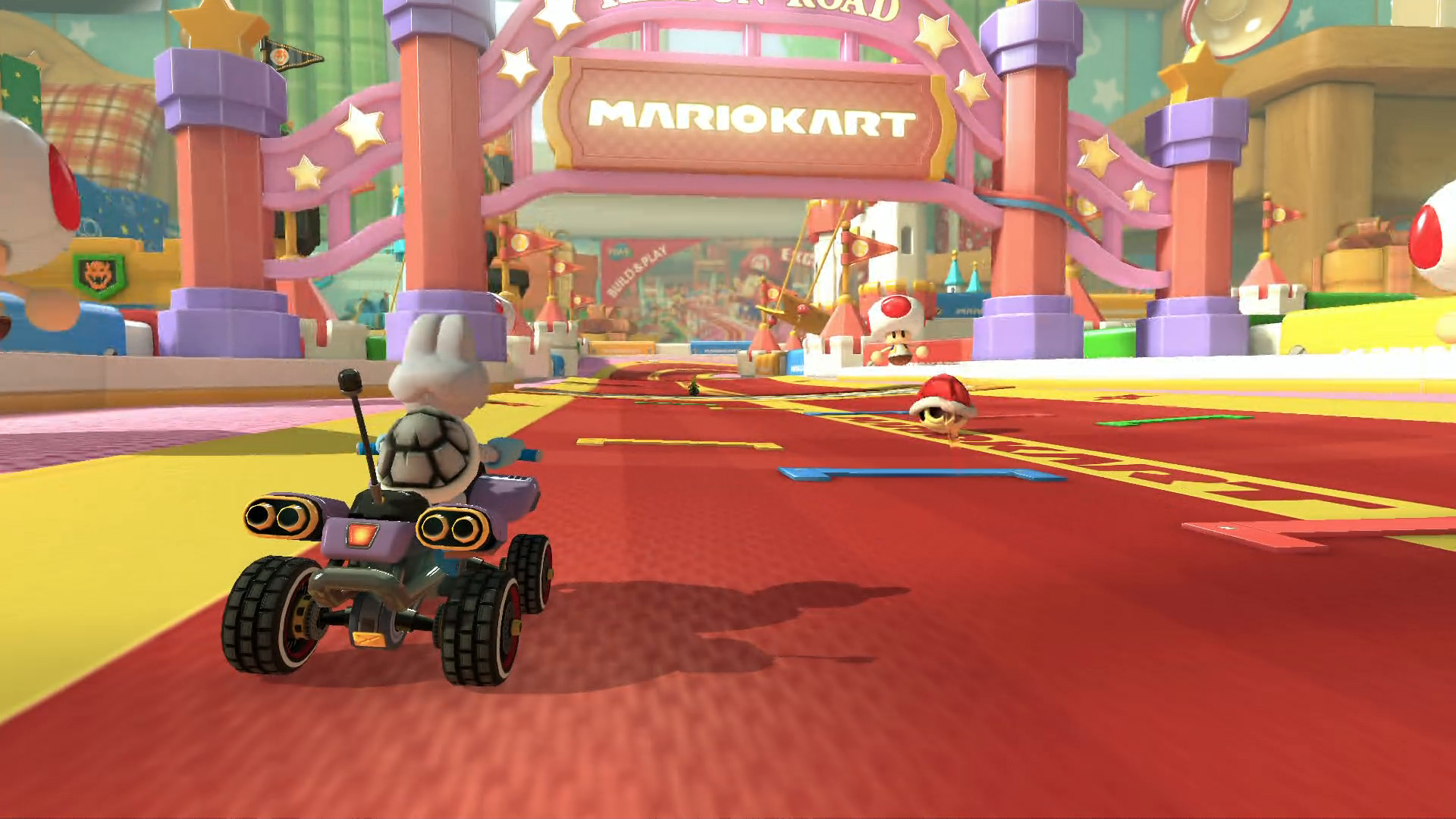 Approaching the re-release of Deluxe I did have a particular hang up from the days of the Wii U version. I mentioned earlier that Mario Kart 8 did prompt my decision to own a Wii U, but it also facilitated the sale of my console as well. Mario Kart is a title best enjoyed with friends, and with online play being an option I was thrilled at the prospect of being able to play with mates, or other humans at any time. And though the multiplayer itself was great fun, it was also rife with issues. Lobby drops, desync issues and a vast selection of minor problems that just couldn’t be ignored meant the frustration reached a boiling point where I decided that Nintendo (at the time) just wasn’t ready to offer me the Online Multiplayer I so desperately wanted. I had troubleshot everything that I could identify as a possibility for my subpar experience, and it left me no joy.

So imagine the joygasm to be had when my experience with Deluxe’s multiplayer was nothing short of heavenly. People from all over the world converged in my session to decimate me in new and emasculating ways, and the lobby persisted until I was tired of it. Players from the Nederlands trashed me, people from Japan offered a middling challenge for a time, and my fond farewell to my Italian friend, ‘Popslut’, who raced a total of 11 times against me, will be remembered. People still take too long to vote for a track, but that isn’t at the fault of Nintendo – people just suck.

I like to call this piece ‘Tragedy in 3 images’

One could argue that Mario Kart 8: Deluxe skirts the territory of being a remaster, something that is whispered in hushed, venomous tones in today’s gaming world. But when the formula has been corrected and improved in so many ways, all you can do is appreciate the second chance to appreciate something that was initially good finally finding its footing and becoming something truly great.

If you own a Switch, and have not purchased or played this title, I can’t recommend correcting that mistake soon enough.