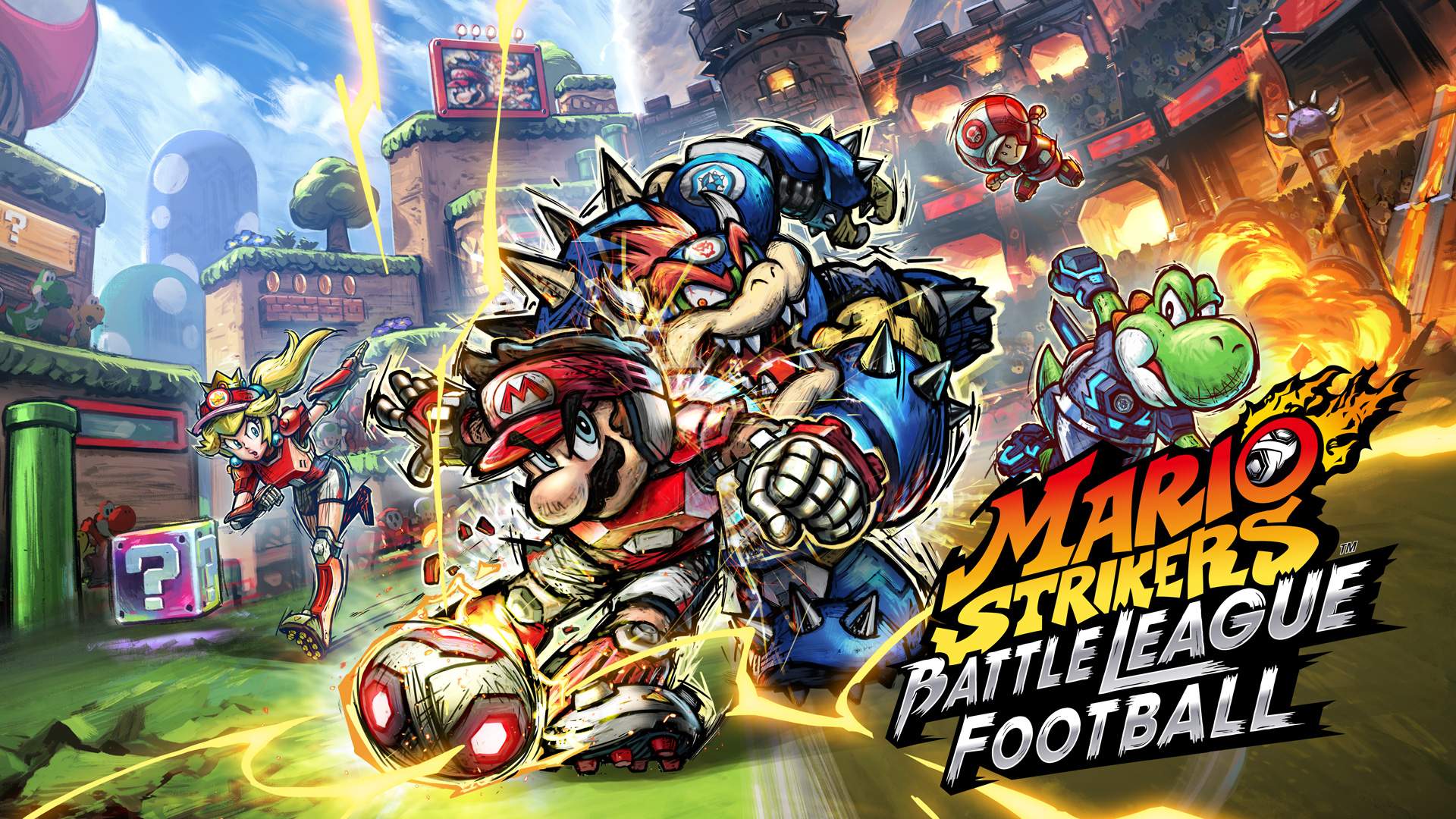 Skipping the Wii U generation, Nintendo’s third entry in its Mario Strikers soccer series is a surprisingly brutal yet approachable sports title that begs for a competitive couch environment. Having enjoyed an intense 90-minute hands-on session across the tutorial and a handful of matches against the Nintendo host, Battle League Football gives the impression that there are fiercely unresolved issues among members of the Mushroom Kingdom. With a focus on arcade modes and online ranked play, players are in for a white-knuckled, sweaty-palmed football fiesta that is going to test friendships on a level unseen outside of Smash Bros.

Accommodating a broad skill spectrum, players will be able to pick up the controller and begin shooting goals with ease. With the AI in control of each team’s goalkeepers courtesy of Boom Boom, players will commandeer whoever is in possession of the ball on their team or switch between their four field players while on the defence.

In the impressive 1-8 player matches, each team begins by choosing their roster of four from ten playable characters of the Super Mario roster. Series staples such as Toad and Bowser are here, as well as surprise entrants Rosalina and the dastardly sexy Waluwigi, romantically adorned with a rose in his mouth.

Each character also has unlockable power gear, which can alter the strengths and weaknesses inherent to each character. Bowser can be modified from head to toe in speed gear like a Tron character participating in the Tour De France, but the boost in his speed will balance out with a reduction in other attributes. These customisable gear builds can similarly be applied across the team, fundamentally changing the utility associated with a given character in favour of creating interesting new team compositions and meta.

Matches are all about emphasising an epic clash within a tiny map filled with destructive mayhem. Once players have chosen their team and colours, they get to choose the theme of their side of the field. The aesthetic choices are few but range from the standard mushroom kingdom and Peach’s Castle to darker variants themed on Bowser’s Castle. Once chosen, the two fields converge in a glorious explosion of colour and sound with heavy guitar fanfare as the competitors materialise from a portal onto the field. From here, players tear up the field after kick-off with all manner of charged shots, passes, and Hyper Strikes reminiscent of Smash Bros.’ ultimate moves.

The mechanics of passing, shooting, dodging, and sprinting across the field will all be familiar to FIFA players. Button mappings for straight and lobbed passes are identical. Through passes, which allow for a wider rather than direct intercept to a teammate, require holding the left shoulder button and can be a bit fiddly when also trying to sprint with one right trigger and dodge with another. All the passes and shots can be augmented with charges by holding the respective button for extra power but doing so leaves players open to tackles.

Gear allows players to build their team with purpose

Tackling turns Mario Strikers into a hilarious blood sport with the most Nintendo brutality this side of Smash Bros. Players are welcome to absolutely demolish the opposing team’s shins at any opportunity. The penalty for a foul tackle is to merely throw an item cube onto the field for the opposing team to pick up. Each team can hold two items at a time, which anyone in the team can use. These are often mushrooms that grant speed boosts, red and green shells, an invincibility star, and other recognisable pickups from Mario Kart. There is gleeful risk in tackling simply to be a hindrance, but this may give your opponent an item that edges them ahead.

Whereas Mario’s various multiplayer spin-off series emphasises a pick-up-and-play design so you can immediately get wrecked by your younger and most inexperienced family members, Battle League Football comes as one of Nintendo’s more complex Mario sport titles. Much of the controls are contextualised so that you will only be able to shoot goals on the attacking side of the field, for example. An emphasis on frame perfect timing, charging shots and passes, and managing stamina lend this entry a much higher skill curve than its other casual Mario sport contemporaries. A plethora of beginner to advanced training courses are on offer to wear in your footy spikes, but even I was struggling to pull off advanced moves among the chaos.

Green shells will ricochet, taking out friend and foe

Skilled players will deftly charge a through shot across the small field, then intercept with a frame perfect follow-up pass to swiftly flank the opposing team and line up a charged shot on goals. A novice like myself will pull off one move in this sequence before Bowser comes tearing through the pitch and subsequently removes my kneecaps. The fierce timing and complexity of contextually handling the ball depending on your field position will be the grit needed to sustain a competitive player base but may leave casual players grinding their teeth against those who have grasped the technicals.

I can’t wrap this preview up without discussing the amazing ultimate moves each character possesses. Like Smash Bros., a strike orb appears and moves around the field, and players may race to be the first to tackle it for their team. Any player on the successful team can then perform a special Hyper Strike when on the attacking side, which results in a quick skill test. Like Mario Golf, this test requires the shooter to land a cursor in a slim margin on either side of a gauge by timing a button press twice. If both presses stop the cursor within the indicated margins of the gauge, the shot will be unblockable. If slightly out on the timing, the opposing player can perform a quick button mash to have the goalie perform a block. My favourite ultimate shot is Peach’s, who kicks the ball in a gravity-defying love heart that charms any opponent caught in its trajectory and has them temporarily lovestruck and rooting for you for a few moments – long enough to follow up an incorrectly timed ultimate with a normal shot on goals. However, tardy players that hold the Hyper Strike ability too long can be tackled and lose the power-up, or otherwise lose the ability after a brief time if unused.

Land in the blue zones for an unblockable Hyper Strike

As it stands, Mario Strikers: Battle League Football looks to be a lean and competitive sports package with a metal attitude that is remarkably mature for the series. If you can spare the better part of an hour to get your couch crew acclimated in the training modes, this is sure to be a crowd pleaser. The ferocious, breakneck pacing of matches is going to elicit emotion that only the Mario party titles reliably deliver. For my first Mario Strikers title, I am eager to try the patience of my friends when this arrives in a couple of weeks.