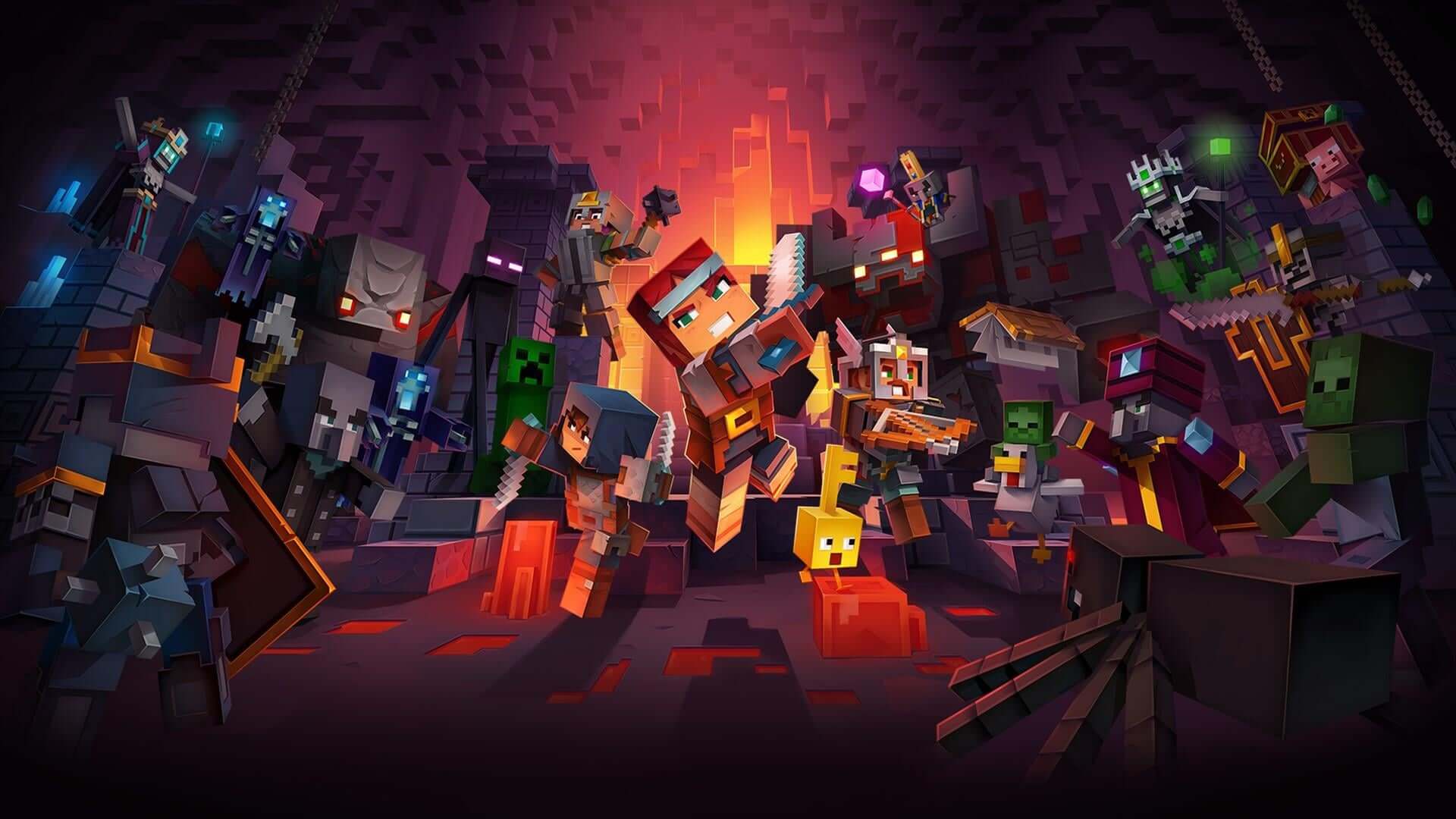 Microsoft has been pretty good with their spinoff titles. Just last month we had Gears Tactics which was a pretty solid tactics strategy game, and previously we’ve had Halo Wars 2, another solid strategy game from a longstanding Microsoft IP. It’s actually part of why I like some of Microsoft’s works so much; they feel a little less predictable than most with these spinoffs. Minecraft Dungeons was a game that I was immediately excited for. I love isometric ARPGs and I love Minecraft. Put the two together and what do you get? A fairly shallow, short and insignificant spinoff game which focuses on its immediate presentation and not much else.

Minecraft Dungeons is the love child of Minecraft and Diablo. It combines the calm, unassuming nature of the voxel-based sandbox with the rushed chaotic nature of isometric ARPGs (like Diablo). You assume the role of The Hero and it is your job to fight through the hordes of monsters and illagers (not a typo) to confront the Arch-Illager, a rejected villager whose actions are fueled by vengeance against the villagers of the Overworld. That’s about all the story you get. You’re just placed in the Overworld with your chosen character and set off on your adventure. That game doesn’t really try to go any deeper than surface level in terms of its contextualisation, and this isn’t helped by the fact that the available content for Minecraft Dungeons is very short.

Minecraft Dungeons comes with nine main missions…that’s all. There are secrets to be found and even a secret level, but even with all of that, I managed to complete the main game in one night. To say that I was fairly disappointed by the campaign’s length, which is shorter than my patience, is an understatement. Not many games leave me saying “wait…that’s it?” but Minecraft Dungeons is one such game. This isn’t to say that the campaign needs to span across 30–40 hours, but the fact that that game asks you to replay those nine missions but in a harder difficulty shows that the team knew that length and substance was an issue, and rather than adding a little more content (to buff the hours to something more akin to the six-to-eight hour mark) they’re asking you to simply retread old ground. I understand that this was always going to be a relatively small game, especially given its modest asking price, but even when factoring that in, there is still virtually nothing to play. To add insult to injury, on the mission select screen there is a tile that says “coming soon” for more content which is a part of the two paid expansions that are included in the Hero Edition. I wouldn’t be surprised if the game only began to feel complete once these two DLC releases happen.

Not everything about Minecraft Dungeons is disappointing, however. The general gameplay is admittedly quite fun. There is a lot of charm to be found within the Overworld and the very simple gameplay mechanics make for a game that’s easy to pick up at any point. Rather than focus on specific classes and stats for you to build, Minecraft Dungeons focuses on the perks and attributes of specific pieces of gear. The attributes range from raw damage/defence all the way to the unique traits that may be available. This is where the levelling system chimes in. As you play through Minecraft Dungeons, slaying enemies and bosses, you will increase in level. Each time you level up you are granted one enchantment point. These enchantment points can be spent on…enchantments. These enchantments range from raw damage upgrades for weapons to defensive traits in armour (my favourite being 90% damage resistance after using a potion) and everything in between. The game also doesn’t punish you for investing in levelling gear as dismantling gear that has enchantment points in it will see all the invested points returned. The simplicity of this game’s character building allows for it to be accessible for everyone and, to that end, it fits the style of Minecraft perfectly.

While the gameplay systems are pretty cool, the moment-to-moment gameplay can be frustrating. When it works, it’s just simple fun. Fighting against hordes of enemies has always been oddly gratifying and the power trip you get from games like Diablo and Path of Exile remains within Minecraft Dungeons. When it doesn’t work, the game can be quite frustrating. Playing on PC, you can choose to either use keyboard & mouse controls, or you can opt for using a controller. We’ll start with the mouse & keyboard controls. I’ve always kind of struggled with isometric ARPGs as I’m not the biggest fan of having to hold my mouse click to move around (or click to somewhere to move to that spot). However, Minecraft Dungeons’ movement and controls feel slightly clunkier, which is actually due in part to the simplicity of the gameplay. Most of the other isometric ARPGs get around the general control issues by requiring players to be a little more attentive and aggressive with their skills and abilities. Minecraft Dungeons doesn’t really require this as much and just focuses more on your standard attacks while occasionally using the various abilities of your gear. Because of this focus on standard attacks, there is nothing to hide the restrictive nature of this control method, meaning you are always fighting the game on where you want to go during combat. On to the controller, the game really feels like it was made for playing with a controller. The controller bindings are simple and movement is significantly easier, which makes the combat feel much better. Minecraft Dungeons has to be the only isometric ARPG that I prefer playing with a controller.

The other high note for me had to do with the environments. Minecraft has always had a knack for really cool building and natural formations. Something about the blocky nature of Minecraft’s build is just charming and large scale, decorative buildings are always a marvel. Minecraft Dungeons captures the wonder of the creative buildings that personify what Minecraft is and uses that to create some cool, memorable environments. Even different biomes are used to create thematically appropriate levels and they are filled with unique mobs, some of which don’t even exist in Minecraft. The creativity displayed by these designers and artists is pretty cool and I can see a lot of people taking notes from the builds displayed in this game and translating them into the core Minecraft game (even if some of them break the standard Minecraft rules).

In terms of performance, the framerate for Minecraft Dungeons was very stable. I never had any problems with performance in that aspect. The game is quite buggy, however. The most predominant bugs I encounter basically gimped my controls. Mouse movement was relegated to point and click, not holding the mouse, and I even had an issue with the controller where pressing the A button (the button which you use to attack) would bring up the accessibility settings. The other major issue I had is when playing online, every mission or two would see me disconnected and returned to the main menu, and upon reentering the game, the loot chest which opens at the end of every mission would have its displayed bugged with a flat, grey plane.

Minecraft Dungeons is somewhat of a disappointing release. It was never poised to be a hard replacement for games like Diablo III or Path of Exile, but it also didn’t need to be. It aims to be a simplistic take on this style of game while sporting the Minecraft aesthetic and charm. Its fun enough gameplay and cool environments are enough to prop the game up for a fun weekend, but not really much more. The campaign is short enough to make The Order: 1886 feel like an Odyssean epic and the poor interpretation of longevity in the difficulty-based game design makes a game that is already incredibly shallow lack any semblance of depth. I can’t really recommend this game unless you just want a small day or two of mindless fun. 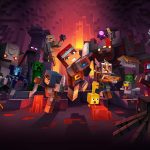 Minecraft Dungeons Review
Take Me To The End
Though it does a great job at making the isometric ARPG formula more accessible, Minecraft Dungeons ultimately falls short due to its shallow nature
The Good
Cool environments
Simple character building mechanics
The Bad
An incredibly short campaign, made worse by being forced to replay the same campaign on harder difficulties for any sense of longevity
Keyboard & mouse controls made clunkier by simple gameplay
Various bugs (some of which can make controls even worse)

Minecraft Dungeons Review
Take Me To The End
Though it does a great job at making the isometric ARPG formula more accessible, Minecraft Dungeons ultimately falls short due to its shallow nature
The Good
Cool environments
Simple character building mechanics
The Bad
An incredibly short campaign, made worse by being forced to replay the same campaign on harder difficulties for any sense of longevity
Keyboard & mouse controls made clunkier by simple gameplay
Various bugs (some of which can make controls even worse)
In this article:double eleven, Microsoft, minecraft dungeons, mojang studios, review, Xbox Game Studios