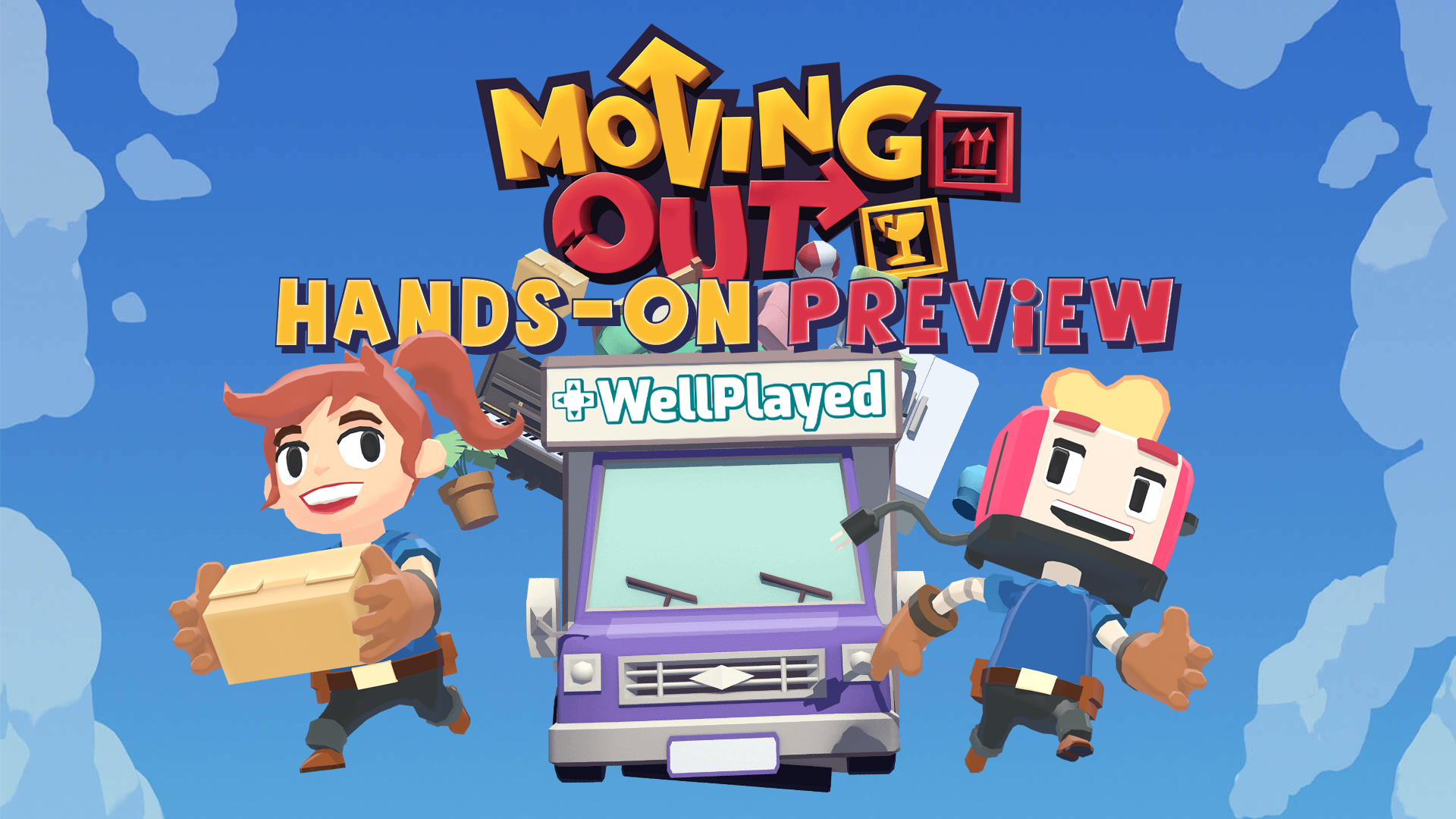 Moving homes is tough. Ask anyone who’s done the biannual apartment shuffle in Melbourne (me) or went through five parent divorces as a child (also me). Not only is the act of packing and sorting your entire accumulation of furniture, household items and Amiibo figures a long and protracted chore, but you’ve then got to physically relocate all of it to a second location. If you’re lucky, it’s close by. If you’re unlucky (or just recently realised that Perth is a hellhole), it might be on the other side of the country. Either way, one surefire strategy to at least partially curing those moving blues is to hire professional movers. Why split the move up into twenty trips between places in your mate’s station wagon when you can call a couple of hired hands to rock up and take the whole lot in their truck?

That’s where Moving Out, the latest game from Death Squared and OTTTD developer SMG Studio comes in. Moving Out is a co-operative couch multiplayer game where you and your friends play as Furniture Arrangement & Relocation Technician (or F.A.R.T.s), and race the clock (as well as increasingly wacky hazards) to clear out your clients’ homes and offices and load up your truck. Recently, WellPlayed Managing Editor Zach Jackson and I were lucky enough to visit SMG Studio’s Melbourne office to play an early build of Moving Out ahead of featuring the developer and game in our Made In Australia segment for September. After initially getting off on the wrong floor, we got close and comfy on a couch in the SMG office with controllers in hands and set off to become the best damned moving company we could be.

I always hesitate to describe one game by comparing it to another, but there’s no getting around it with this one – Moving Out looks and feels a lot like Overcooked. As far as comparisons go, that’s not a bad one to have. Overcooked’s brand of co-operative multiplayer chaos has had immense success, and it only makes sense for more games to try and replicate that. Just like that series, Moving Out takes an otherwise banal and un-glamorous job and distills it into its most basic functions before adding all manner of zany twists, throwing on a deceivingly pleasant visual style and doing everything possible to make sure you and your friends never talk to each other again. The recent announcement that Team17, publisher of Overcooked, is helping take on publishing duties for Moving Out says volumes. We’ve basically got a new subgenre of multiplayer gaming with titles like these, and the people love it. I’ve taken to calling it ‘Confrontational Co-op’, but I’m sure there’s a more elegant solution out there somewhere.

Each stage in Moving Out follows the same basic formula; your squad of removalists rocks up at a home, office or establishment of some kind and is tasked with removing key items and furniture and loading them into your truck before the timer runs out. Simple enough, right? That is until you’re facing down imminent death as you and a mate balance precariously on wooden beams over an active volcano, each carrying one end of a three-seater sofa. Before you can get to that point though it’s important to get the basics down. You’d think a couple of young lads living the rent life would have an L-shaped couch out of a set of french doors faster than our PM gets out of a unisex dunny, but sadly this was not the case. The first step to being good at Moving Out is figuring out how to steer large objects between multiple people. Spoiler alert: it’s just as hard in the game as it is in real life. Effective communication is key of course, and after a few minor setbacks and some criminal property damage, Zach and I were on our way to becoming an efficient removalist team. Almost too efficient, perhaps.

Screaming, fighting, nail-biting and high-fiving are all important ingredients to a good couch co-op experience, and the road to capitalising on that is surprisingly scientific

You see, in Moving Out, it doesn’t matter all that much how you get the job done – as long as it gets done. If that means throwing the odd table through a window to save time lugging it through the whole house, so be it. In one early level it’s heavily suggested – nay, outright encouraged – that players simply throw their client’s furniture to each other across a pool in order to get it out in record time. After all, who’s gonna know? It’s surprisingly easy to huck smaller items across a room to another player, and two can work together to swing bigger pieces through the air. Once you’ve figured out the getting-shit-out-of-the-building part of the gig though there’s also the getting-shit-into-the-truck to consider. That was lesson number two in WellPlayed’s first foray into the moving business – sure you can shave precious time off the clock by yeeting beds off the second floor, but if you don’t pack your truck properly you’re gonna waste all that time again just Tetris-ing everything in. It took a few goes of us struggling to fit seven couches in one truck before someone from the SMG office pointed out that we could pile them on top of each other to save space. I still blame Zach, though.

The real measure of success for a game like this is just how much it makes its players’ blood pressure rise. Screaming, fighting, nail-biting and high-fiving are all important ingredients to a good couch co-op experience, and the road to capitalising on that is surprisingly scientific. SMG’s designers use video and audio data from playtesting sessions like ours to pinpoint exactly which moments in-game elicit the biggest responses, and that information is fed back into the game to ensure the emotional rollercoaster keeps on rolling. I can still feel the bitter disappointment emanating from Zach after I fell into molten lava for the fifth time in a row while trying to help him bring things across, and I just know that the level designers saw that footage and immediately set out to make that part even more devious. Bastards. It was especially interesting to get the chance to play some less finished and more experimental levels later in our session that still had all manner of placeholder concepts (complete with scrawled developer messages pointing out incomplete areas). I’m sure what we did see only scratches the surface of some of the ridiculous and inventive ideas that are being poured into the complete game, and that makes me very excited indeed.

In just the small taste of Moving Out that we were lucky enough to experience I can see immense potential and a high future turnover of friends, even without experiencing the (assumed) absolute chaos of a four-player game. SMG Studios are quickly becoming a household name in creative and compelling indie games, and Moving Out might just propel them to stardom status. I look forward to knowing the joys of moving when the full game releases, both virtually and when my partner inevitably kicks me out for falling into the lava repeatedly.

Moving Out is currently slated for release in 2020 and is coming to PlayStation 4, Xbox One, Nintendo Switch and PC.