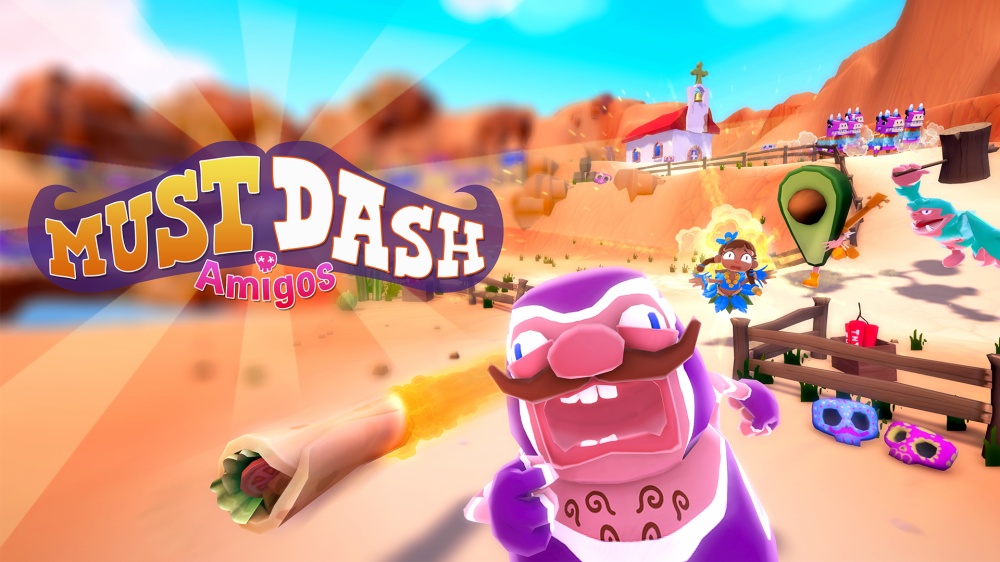 I have an undying love for party games. There is just something undeniably wholesome and enjoyable about having a couple mates around, sitting on the couch and getting stuck into a game with minimal depth and maximum fun. I frequently host get-togethers at my house and more often than not we end up playing one of a handful of brilliant, crowd-pleasing titles like Mario Kart 8 Deluxe, Gang Beasts or Tricky Towers, simply because we all know that a good time will undoubtably be had. That’s not to say that as a group we aren’t always looking for our next ‘old faithful’. Trailers, gameplay and articles are frequently thrown around our group chats as we trawl the internet for new party games – and I was hoping that Must Dash Amigos, might be our new go-to. Sadly, an overreliance on its core gimmick, limited game modes and frustrating momentum-based gameplay ensures that this one is less fiesta and more siesta.

Between a rock and a cliff just isn’t as catchy

Must Dash Amigos is a battle racer, a game that combines a racing format with weapons and upgrades, not that dissimilar to your Mario Karts and Sonic Team Racer – though instead of manning a go kart, you’re just hoofing it with your own two legs. Where Must Dash veers away from your stereotypical kart racer is with its fixed, isometric camera, akin to the old-school Micro Machines games. Additionally, Must Dash doesn’t task you with beating your opponents to the finish line. Rather the objective is to get far enough ahead of them so that they fall offscreen, becoming eliminated in the process, with the soul survivor of three rounds walking away with the W. This method of competition can be infuriating at worst and passable at best, as movement is based on momentum. Straight out of the gate you will be slow to start, but as you gain speed it becomes harder to slow. This may not sound like an issue, but many of the courses have moving platforms that require you to stop on a dime, which is painfully finicky to accomplish when your character desperately wants to keep barrelling forward.

In order to best your foes, pinatas are scattered throughout the course, filled with weapons and boosts such as the missile-like burrito, the ghost pepper that gives you temporary invincibility and the obscenely overpowered bull that acts similarly to Mario Kart’s Bullet Bill, giving you a speed boost while simultaneously mowing down opponents in your way. The power-ups are fine for the most part (aside from that damned bull), but it can be hard to tell what weapon you have, as there is no prompt on-screen outside of seeing what is in your character’s hand, which can be troublesome due to the camera angle and the relatively small models. Another annoying problem with the items is their distribution. I hate to make the comparison again, but in Mario Kart, players at the front of the pack tend to get green shells, bananas and other defensive items as they obviously don’t require any further help winning. Here however, it’s irrelevant where you are on the leaderboard – you’re just as likely to get that horned horror in first as you are in last. Item scaling is used for good reason, but clearly miniBeast missed that memo when it was passed out on Taco Tuesday.

For a Nacho Farm I see very few Nachos growing

Couch multiplayer is obviously the main focus of the game, though there are only two modes on offer when it comes to playing with friends. Aside from the elimination races, there is also a battle mode. Battle mode has you and your friends fight it out in a small arena filled with pinata pick-ups and environmental pitfalls such as falling platforms and swinging obstacles. The races aren’t anything to write home about, but they get the job done and with a few people playing you can squeeze out a bit of fun. The battle mode on the other hand is like a quesadilla with no cheese – it’s plain, it’s messy and it just doesn’t fit together right. Like I said earlier, the movement is based on momentum, so when you are thrown into an arena with sharp corners and thin walkways aplenty the result is going to be anything but entertainment. I simply had no fun with the battle mode as falling off the side of the map constantly is just not my side of salsa.

There is a singleplayer offering, but there may as well not be. Time trials and challenges such as controlling two characters at once make up the entirety of the lone gameplay. There are four regions (city, desert, jungle and islands) with three maps apiece, and while they each provide a different feel, the lack of variety in the gameplay bogs down the experience quickly. There are four characters to choose from – the masked luchador Pedro, the beast Chompster, the musician Maria Che and the…small girl Lelei. Despite differing in size and mass they all play exactly the same, meaning your choice comes down to cosmetic preference. They each have unlockable outfits obtained through playing the game, but aside from that there is little else in the way of progression.

I cannot stress this enough, this bull is the worst

The game does have an amount of charm to it, with the Mexican theme running through everything from visuals to audio, but a gimmick is not enough. I did have small pockets of fun with the races when playing with a few friends but the lack of modes, the abysmal selection of singleplayer content and the generally frustrating movement meant that any enjoyment was fleeting. As much as I wanted Must Dash Amigos to be our next hit party game, it’s unfortunately turned out to be an avocado too overripe to even turn into Guac. 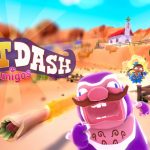 Must Dash Amigos Review
What Is Meh In Spanish?
The gimmick is entertaining and there is potential for a decent party game in there somewhere, but a lack of variety, an almost non-existent singleplayer and gameplay that is more frustrating than fun squander that potential
The Good
Mexican theme is kinda charming
Races can be a flash of fun with friends
The Bad
Momentum-based movement is painful
Battle mode is worse than microwave nachos
Singleplayer options are dull and limited
Item scaling is non-existent, making races unbalanced
That stupid bull
4.5
Bummer

Must Dash Amigos Review
What Is Meh In Spanish?
The gimmick is entertaining and there is potential for a decent party game in there somewhere, but a lack of variety, an almost non-existent singleplayer and gameplay that is more frustrating than fun squander that potential
The Good
Mexican theme is kinda charming
Races can be a flash of fun with friends
The Bad
Momentum-based movement is painful
Battle mode is worse than microwave nachos
Singleplayer options are dull and limited
Item scaling is non-existent, making races unbalanced
That stupid bull
4.5
Bummer
In this article:Battle Racer, Burrito, miniBeast Game Studios, Must Dash Amigos, pc, Pinata, switch, Xbox One