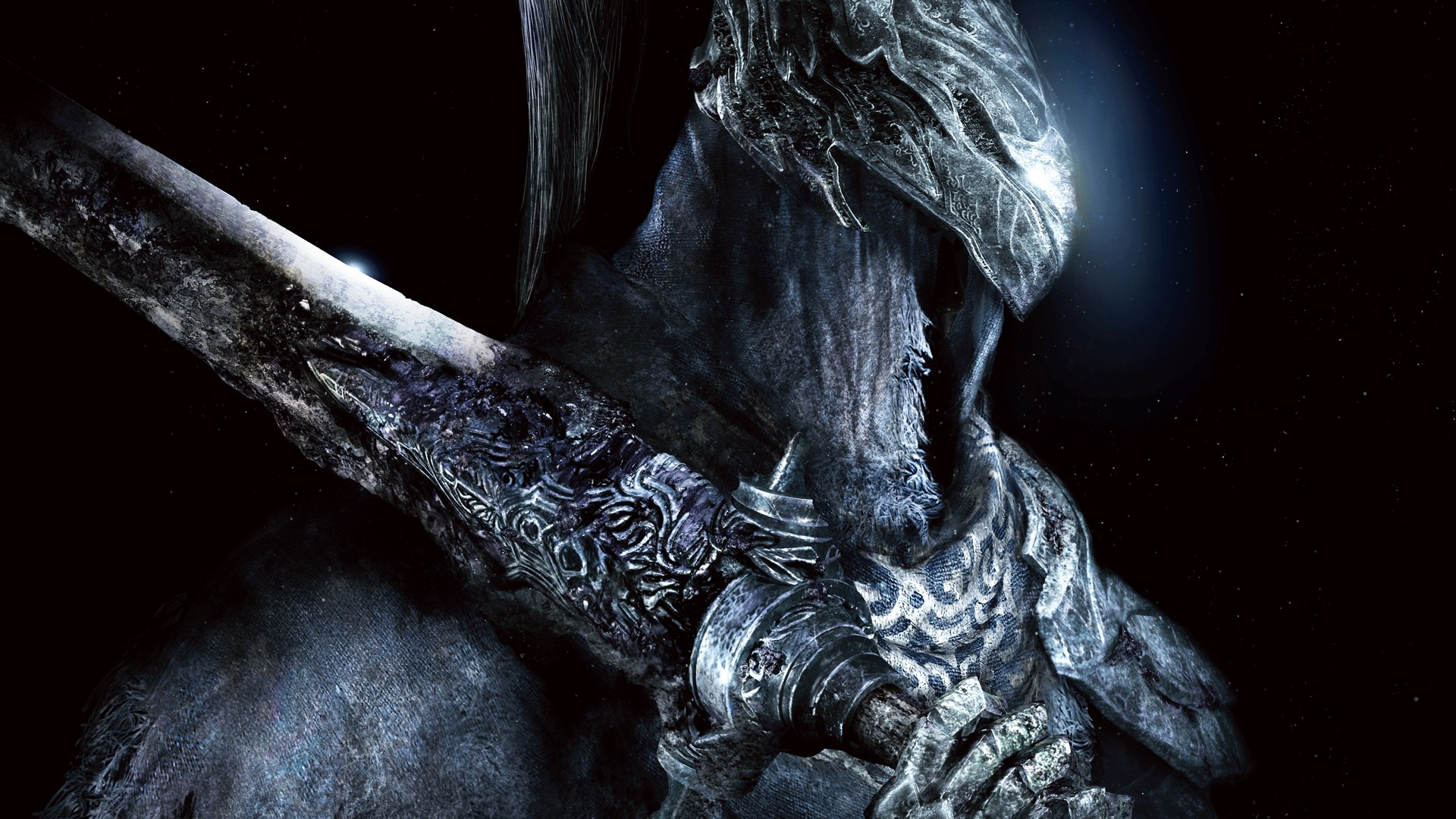 Bloodborne was my first taste of FromSoftware’s unique signature-style of action-RPG. It sticks in my mind as one of PS4’s best exclusives, with deeply challenging and visceral gameplay coupled with a great sense of atmosphere. Being my first From game, it will surprise no one that the first few hours or so involved a fair bit of dying. I knew of course about From’s formidable legacy and that death in a From game is your greatest teacher. So gradually I learned the game’s ins and outs and how the mechanics fit together and my deaths became far less frequent. In fact, I found the challenge in Bloodborne dissipated quite quickly, and apart from a few notable sections (looking at you Unseen Village) I breezed through the last half, and had little trouble in an NG+ run. So there I was, a headstrong plucky Bloodborne player, when I spied a cheap copy of Dark Souls 2: Scholar of the First Sin on the shelf at my local games store and decided to take the plunge. I had conquered Bloodborne with relative ease, I was confident I could stroll into Dark Souls and casually do the same. But I was wrong. Very, very wrong.

My first death in Dark Souls 2 came approximately thirty seconds into my playthrough, when I punched a small dog/frog hybrid creature, only to be promptly wailed on by not only it, but all its mates too. You Died. Trophy Unlocked: “Welcome to Dark Souls.” Welcome indeed. I ran past these creatures once I reawoke and soon was choosing a build and look for my character. I had gone with a duel-wield dexterity-based build because I didn’t like the idea of using a shield. After all, Bloodborne didn’t even have shields; blocking is for girly-men. I had visions of myself dancing around my foes hacking into them with double sword power cackling like a madman. This was destined to change drastically, and I pity the past version of me who thought they could waltz in and establish dominance straight off the bat. That is not how these games work; disrespect will be punished. 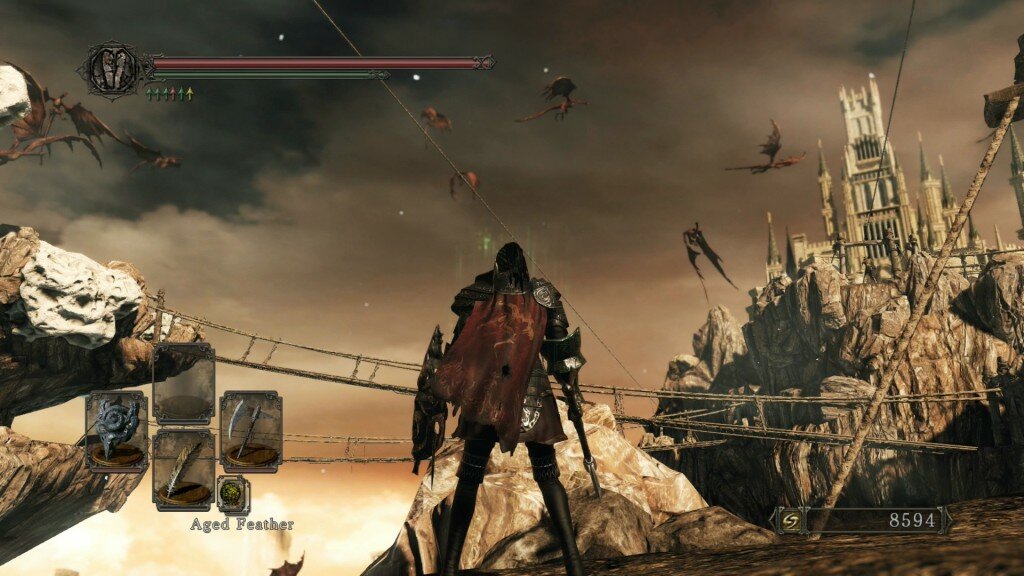 After getting to the sun-dappled (praise it) hub of Majula I began to explore. I found the Forest of Giants, and like a baby learning to walk while under the influence of alcohol I stumbled through each section, desperately longing for the warmth of the next bonfire (these function as a checkpoint of sorts in Dark Souls). I managed to kill my first boss, The Last Giant, on my first try although I can’t say it was a pretty victory. In the back of my mind I knew I had no idea what I was doing, and if the game got even a fraction harder I would be crushed. Lo and behold, the game got a fraction harder, and my descent began.

Heide’s Tower of Flame is the place where I can say I was truly reborn, but perhaps reborn is too soft a word. The area is filled with great hulking knights with very large and very deadly weapons. I only had to fight one at a time, but it was no matter; one was more than enough to destroy me with ease. Time and time again I was beaten mercilessly into a bloody pulpy mess on the ground, only to respawn at the Majula bonfire. With a heavy heart I would make the trek back to Heide’s Tower, knowing the knights were waiting for me, knowing it probably wouldn’t be long until I would become floor paint and once again reawaken in Majula. As if this wasn’t enough I was also contending with an effect known as hollowing. Every time you die, your max HP takes a hit and can get as low as 50% of the maximum. I needed every single little bit of health I had, and this constant and brutal effect made each death sting all the more. I jealously horded the few Human Effigies I had (these reverse the hollowing effect and restore max HP to normal), only using them when I just couldn’t continue with half my health lopped off when I respawned. I’d say this typified the first eight to ten hours of my journey. I felt like I wasn’t getting better, like the enemies were laughing at me behind their massive shields as they gleefully watched my pointless flailing. It is not in my nature to give up, but I was filled with a soul-crushing (pun intended) sense of lonely defeat. I consider myself a fairly able gamer, but could I actually beat this game? 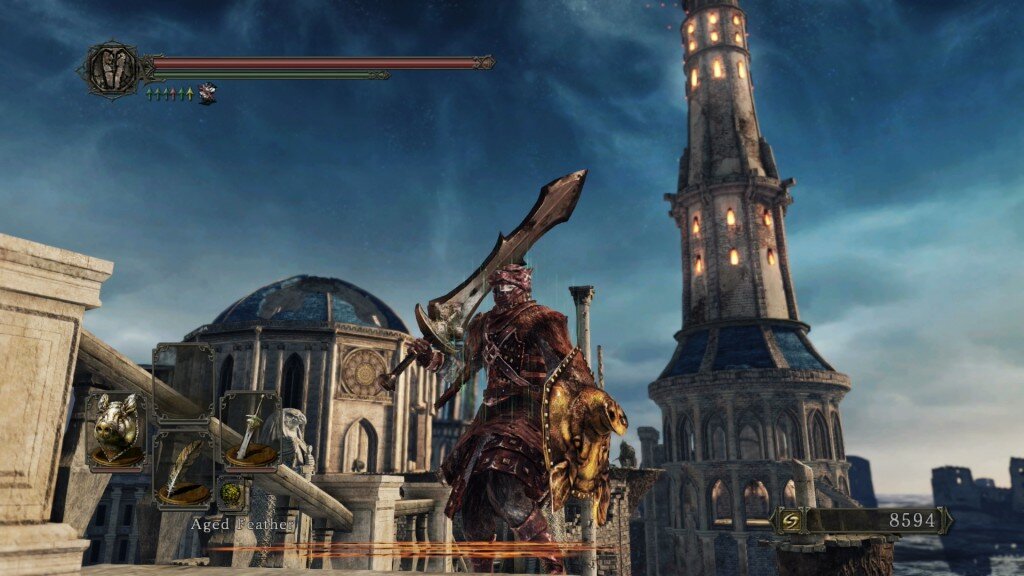 The thing I failed to appreciate is that despite the obvious fact that Bloodborne and Dark Souls share a common DNA, they play quite differently, and require very different approaches. Bloodborne is a fast and frantic beast, whereas Dark Souls requires a slower, more patient approach. In Bloodborne, if an enemy hits you, you can regain health by swiftly hitting them back. It keeps you in the fight and rewards an aggressive style. The very opposite is true in Dark Souls, if you are too hasty and don’t time your swings and dodges meticulously, you will be punished severely. Once I took this on board, the experience completely opened up to me. I slapped on a shield. I watched my enemies and became aware of the reach of my weapon and my enemies’ weapons. I learned to circle strafe and consistently avoid huge, health bar-decimating swings from the knights. Most importantly, I stopped dying. It was a moment of elation when all the pieces came together and I started pushing back. Now who’s laughing you gigantic knight bastards?

Dark Souls 2’s challenge is quite consistent, but I now had the right attitude to best it. Much like Bloodborne, the challenge does dissipate to an extent once you figure out the game’s systems, but I’ll never forget the painful opening hours of my time in Drangleic. I look back at my pathetic beginnings and laugh (and no doubt DYEGB’s Souls vet Jordan Garcia is laughing too), and I can see how that initial fear wove itself into my eventual build. So afraid was I that I would get my arse kicked like I did at the beginning that I focused solely on levelling stats that would allow me to wear the heaviest armour I could find, as well as carry the biggest shield to hide behind. In the Dark Souls community, this cowardly combo is referred to affectionately as a “turtle build.” Turtle build or no, I answered Dark Souls 2’s challenge and emerged victorious. After eighty or so hours traipsing around Drangleic and its surrounds, I have killed every boss in the game and its DLC and uncovered countless secrets along the way. Veni vidi vici… eventually. 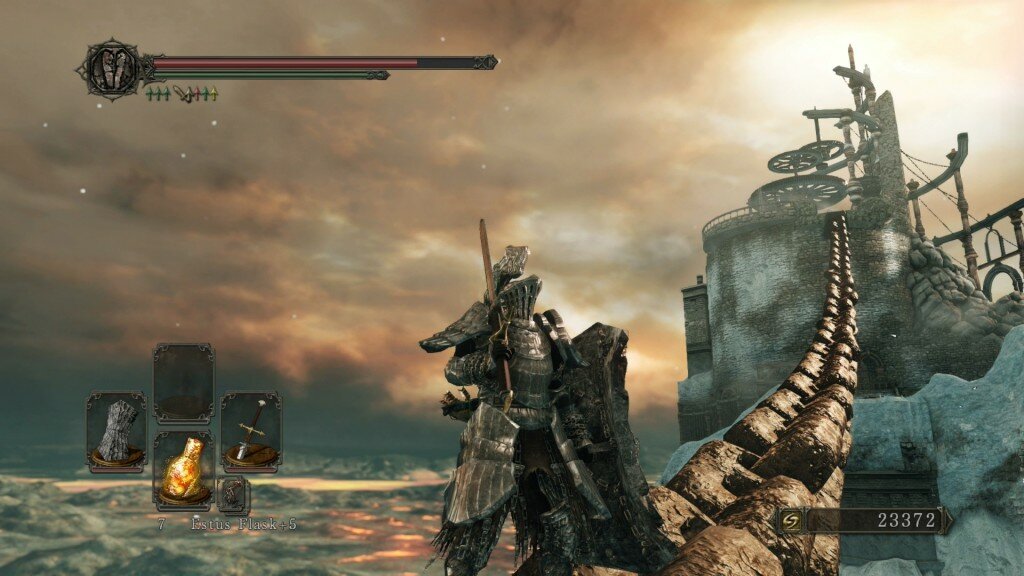 If it’s one thing I learned from this experience it’s the importance of humility in the face of challenge. I realise too that coming from Bloodborne also did me no favours, only serving to make me overconfident and giving me a much greater height to fall from when the game inevitably kicked me off a cliff and laughed at my inadequacy.  So there’s my confession. I sucked at Dark Souls 2 and then learned to not suck. What was your first From game and did you struggle as I did, or were you a pro from the get-go? Let me know in the comments below. At any rate, I eagerly await the chance to die again and be reborn when Dark Souls 3 drops on our shores April 12th. Praise the sun.

In this article:action, bloodborne, Dark Souls, do you even game bro, dyegb, FromSoftware, Kieran Stockton