Red Faction is a roller coaster of an IP, with thrilling highs and some very low, lows. Since its beginnings on the PS2 as a stand-out example of ‘making your FPS unique by way of a cool gimmick’, right up to its awkward pseudo-death at the release of Red Faction: Armageddon – an entry that was actually crushed under its own feature weight. Red Faction: Guerrilla however, was a great case of mixing up the formula in all the right ways to appeal to an emerging audience who were hungry for the fledgling ‘sandbox’ market. It’s a game that steadfastly deserves to be remastered, if only to give a new crop of gamers the opportunity to see why it deserves praise. The real question is, by today’s standards – will they get it?

The face of change. Changing buildings into dust and despair

Taking place on the dusty red planet (Mars), Guerrilla spares no time in establishing the story and core gameplay hook of the game. You are Alec Mason, demolitions specialist and new arrival to the mining colonies of Mars – a no-nonsense worker with no interest in joining any kind of Red Faction Rebellion. However, with a family member dying literally within moments of the game’s opening minutes (they could have saved some time by perhaps canonically introducing him as ‘Motivation Mason’) your tune changes considerably and your knowledge of explosives becomes a terrifying asset in your quest for vengeance. Your newfound interest in helping the oppressed is also a motivator. You are now part of the downtrodden masses, and will do everything in your power to overthrow your oppressors.

Renewable energy is obviously an enemy of the free people

What follows is a rampant warpath hindered only by the limits of your imagination. The surface of Mars is your canvas; the buildings, your paint; the resulting debris – your masterpiece. The game is a thinly-veiled rubble creation simulator, and it revels in its purpose. Though story missions direct you to objectives with a core outcome, their actual execution is entirely up to you. It’s a resounding freedom that allows players to consider their gameplay options and choose what suits (or entertains) them most. This is similarly mirrored in how the game also makes an effort to produce a stream of ‘dynamic content’ missions that can be optionally completed at your leisure. The game even communicates to you clearly: ‘Not completing these random missions will have no consequence’. It’s an enormous relief not often afforded by more modern games, and within a sandbox environment sometimes the chaos is just too ingrained in your current situation that you can’t afford to be called away to INTERCEPT THE CONVOY or RETRIEVE THE DOCUMENT. But during those lulls of activity, when you are pottering about or perhaps simply taking singular joy in smashing optional buildings; a dynamic event being thrown at you can be just what the doctor ordered.

The narrative is a standard revenge plot with a minor twist of intrigue, but generously shaped to ferry your hunger for destruction from one Martian locale to the next. It’s ideally suited that once your appetite has waned on the current architecture, you are given a big set piece mission to enter the next zone and acquaint yourself with new and exciting things to explode. This also comes with a transparent ‘threat level’ on the game’s map to give players rough idea of the ride they are in for once the bombs start falling. I still remember vividly the sheer joy I felt when I saw a massive, canyon spanning bridge before me. On the mini-map it was displayed as a key strategic structure – something that would net me a lot of salvage, and reduce the military presence in this area by a truck-load. Cogs started turning in my head, how could I possibly reduce such a thing to ruin? How many satchel charges do I have? How many explosive barrels could I lug here? Should I park a dozen vehicles on it, then trigger an explosion to make them detonate too? It is a feeling that is hard to discover in some games, but when a system works as well as Guerrilla’s destruction engine (the delightful GeoMod 2.0) you just love to play with it. Did I mention that the game will also display an ‘estimated cost of destruction’ figure for your efforts? I have no idea why a landing pad costs 17 million dollars but I am glad to make the bastards regret every cent. 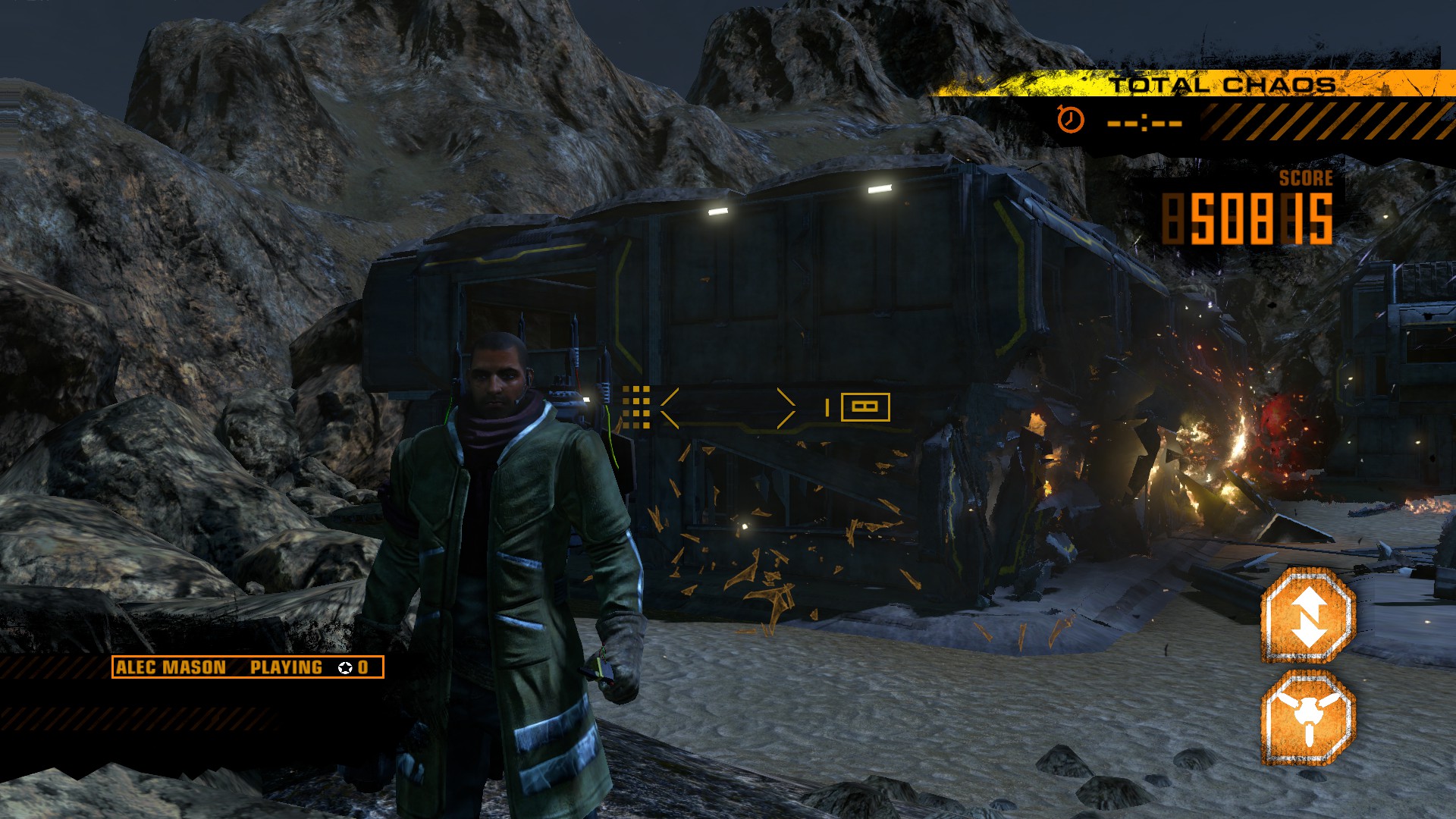 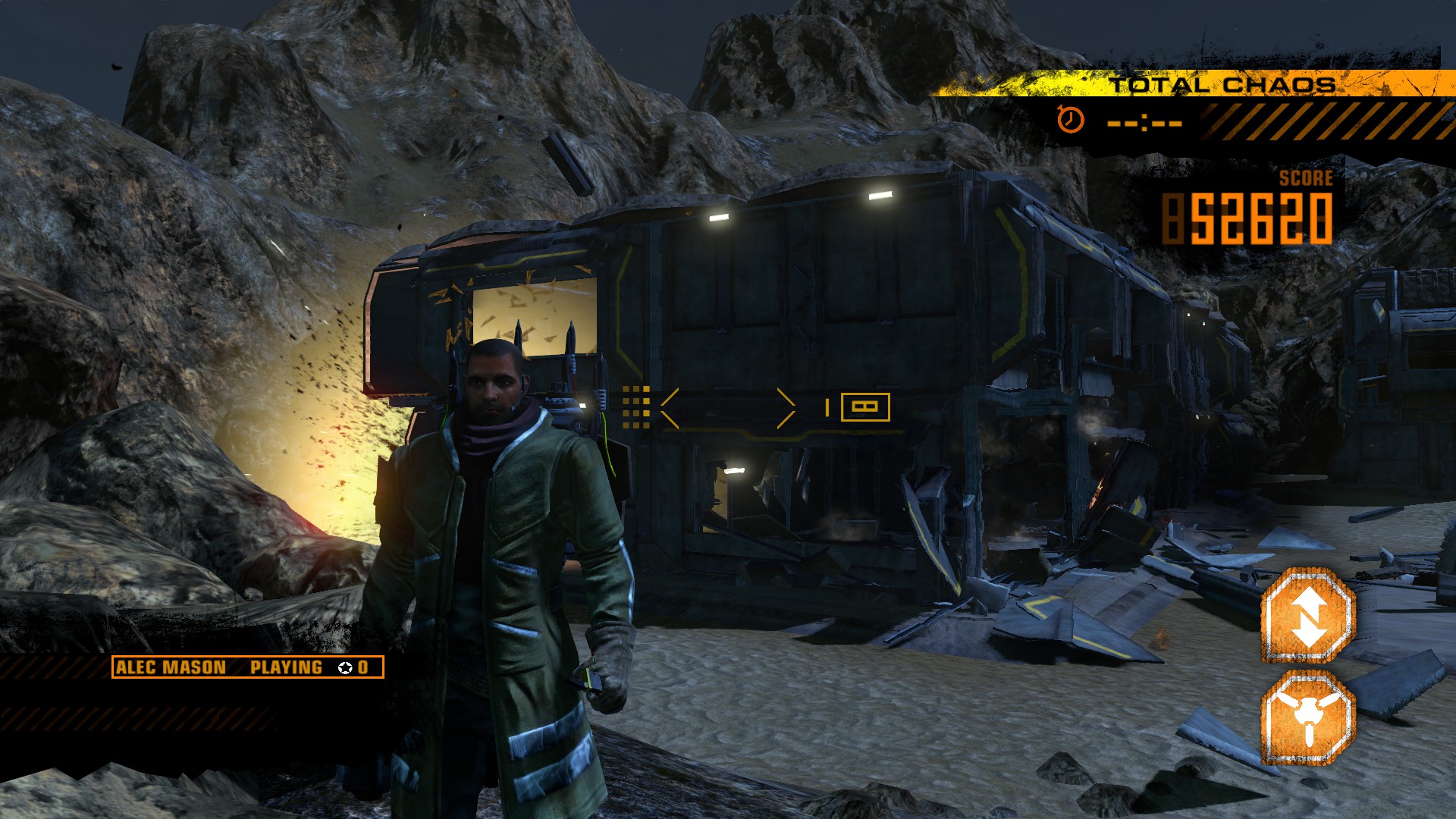 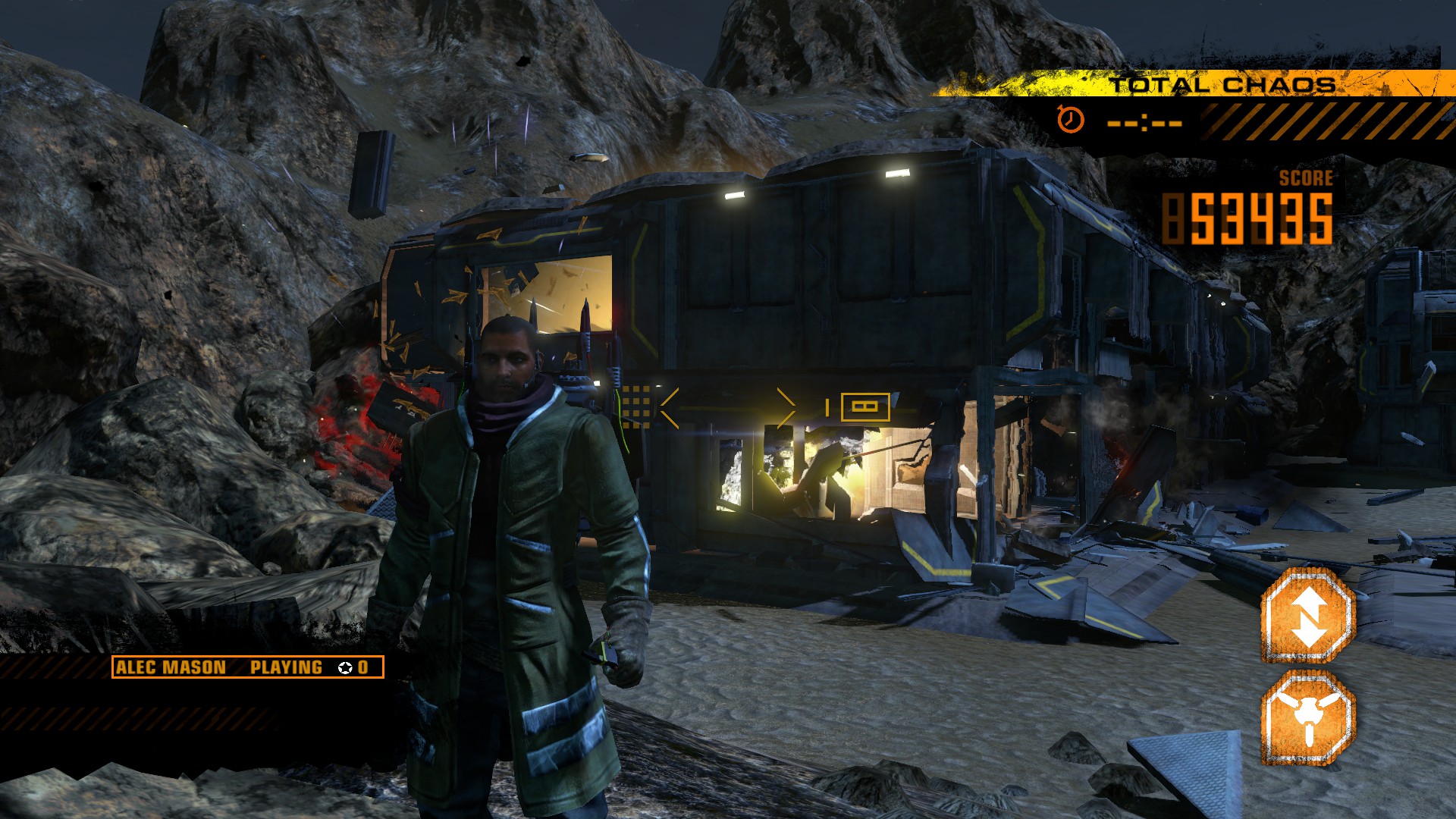 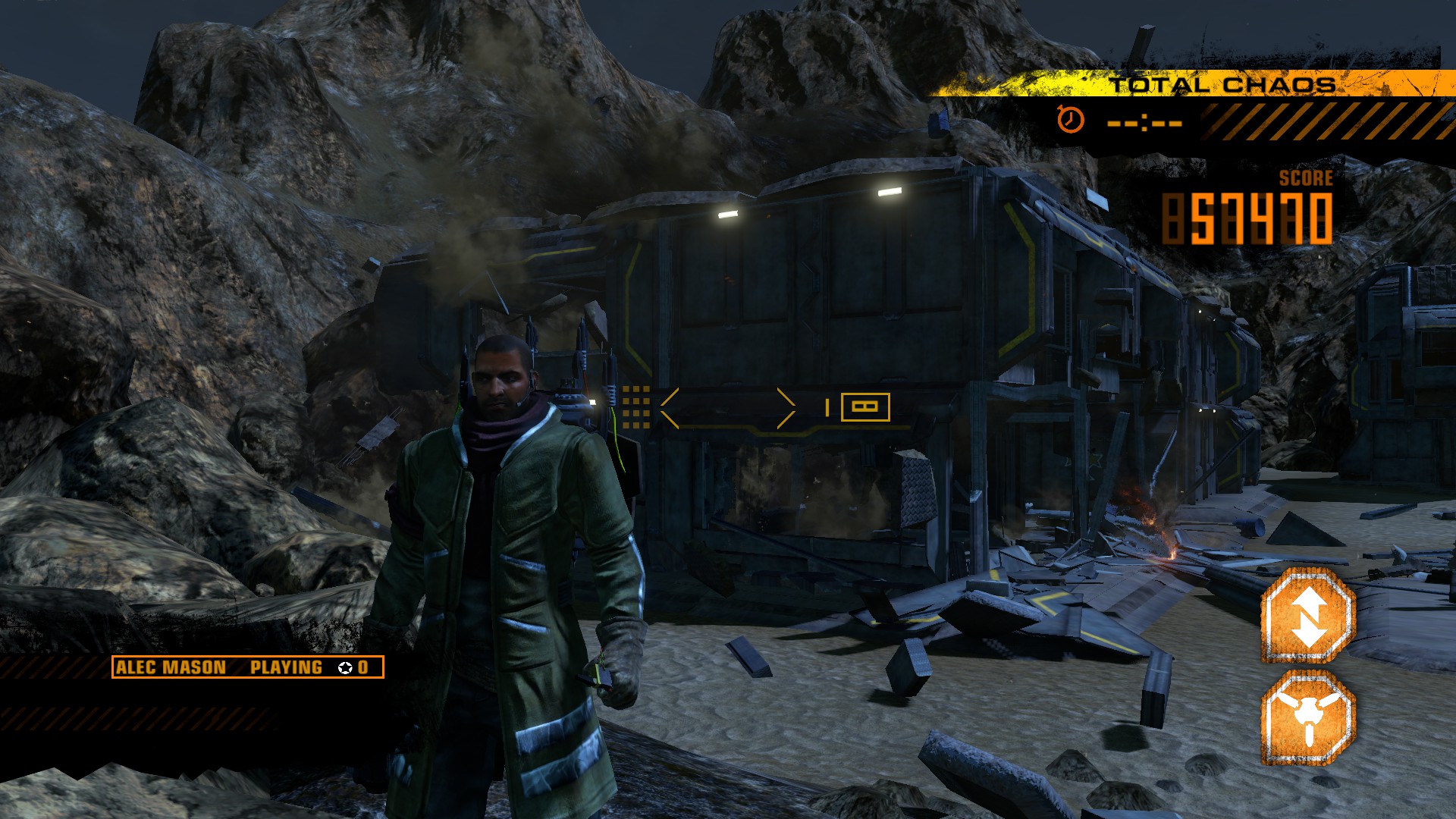 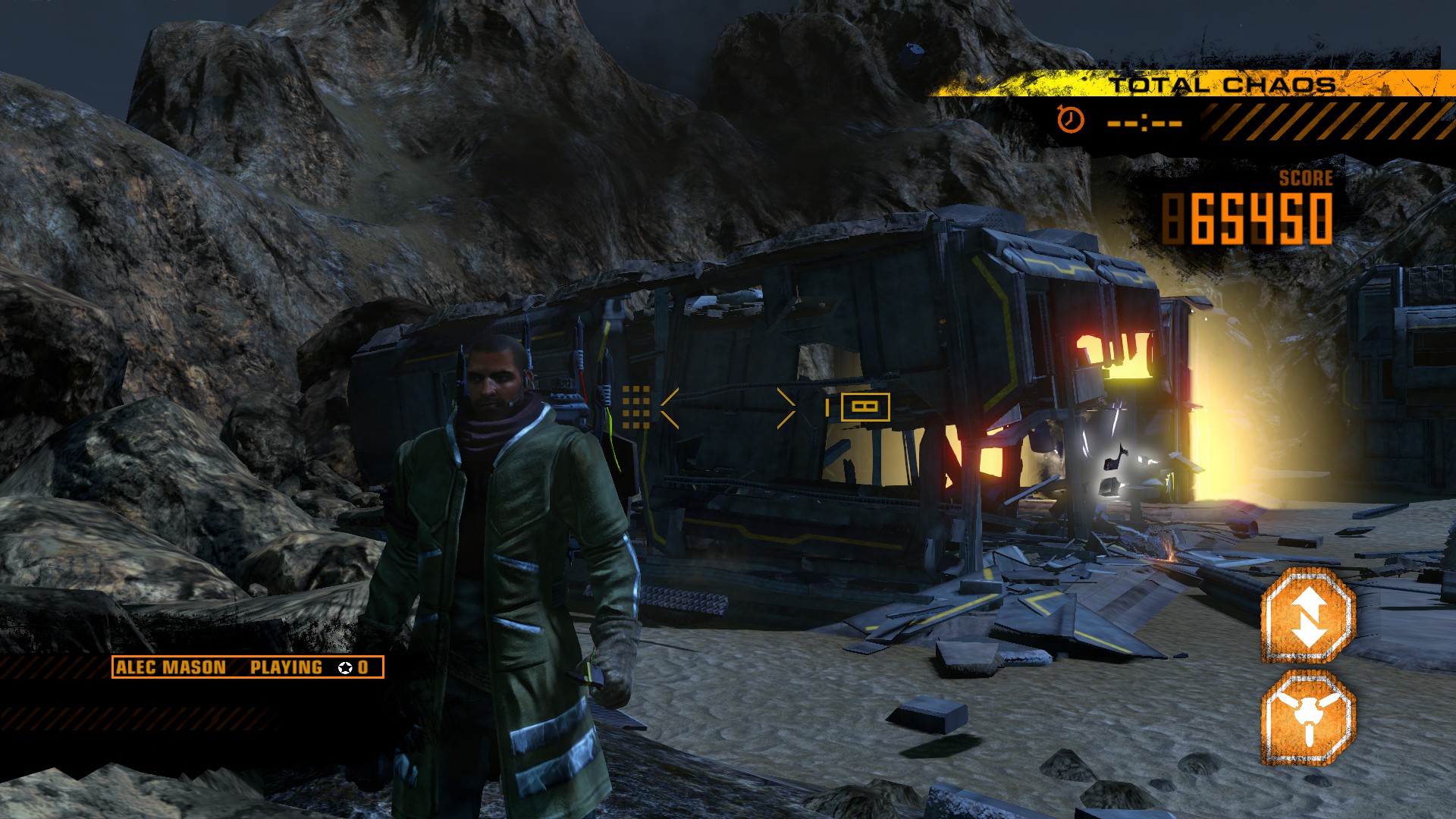 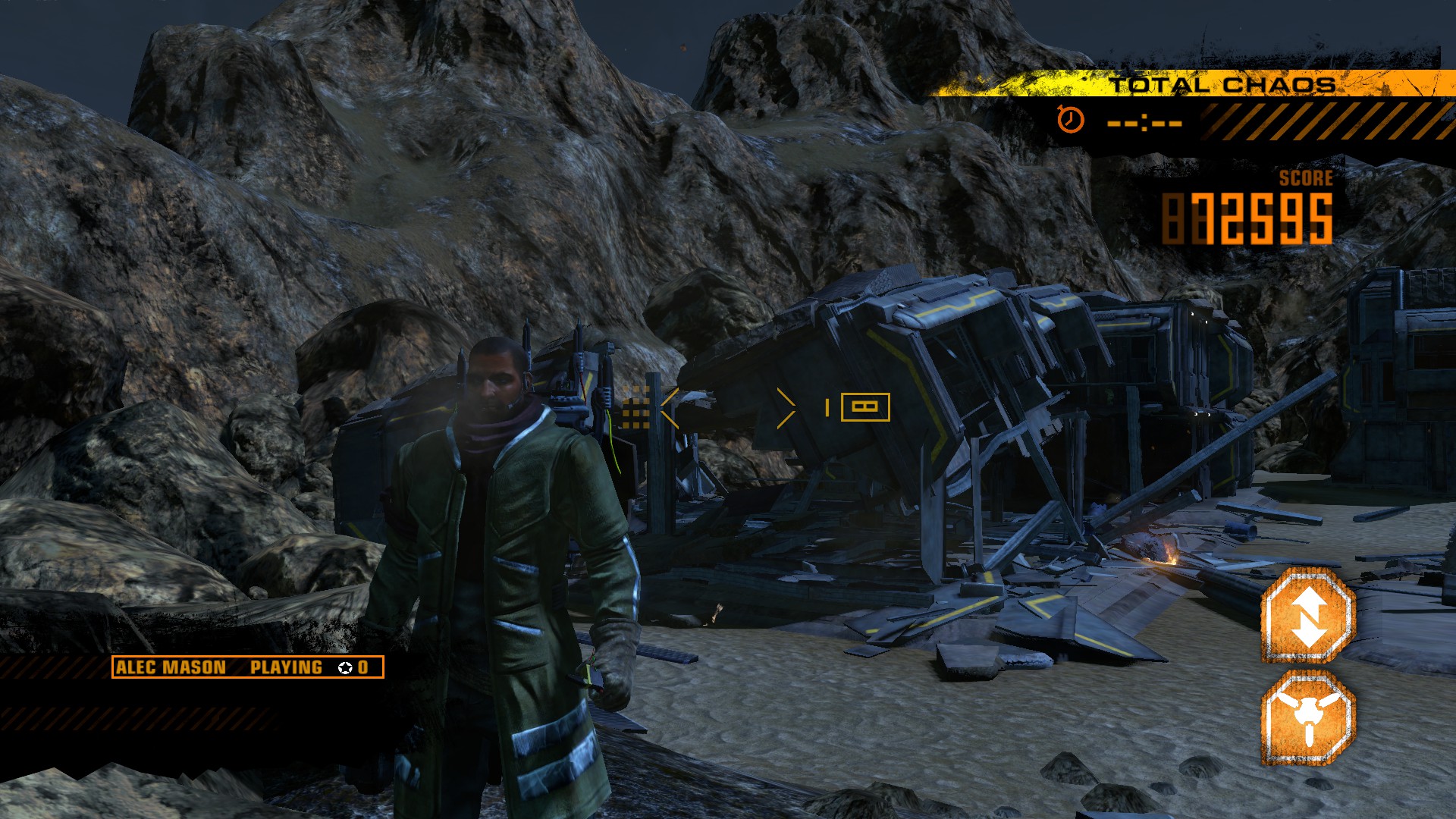 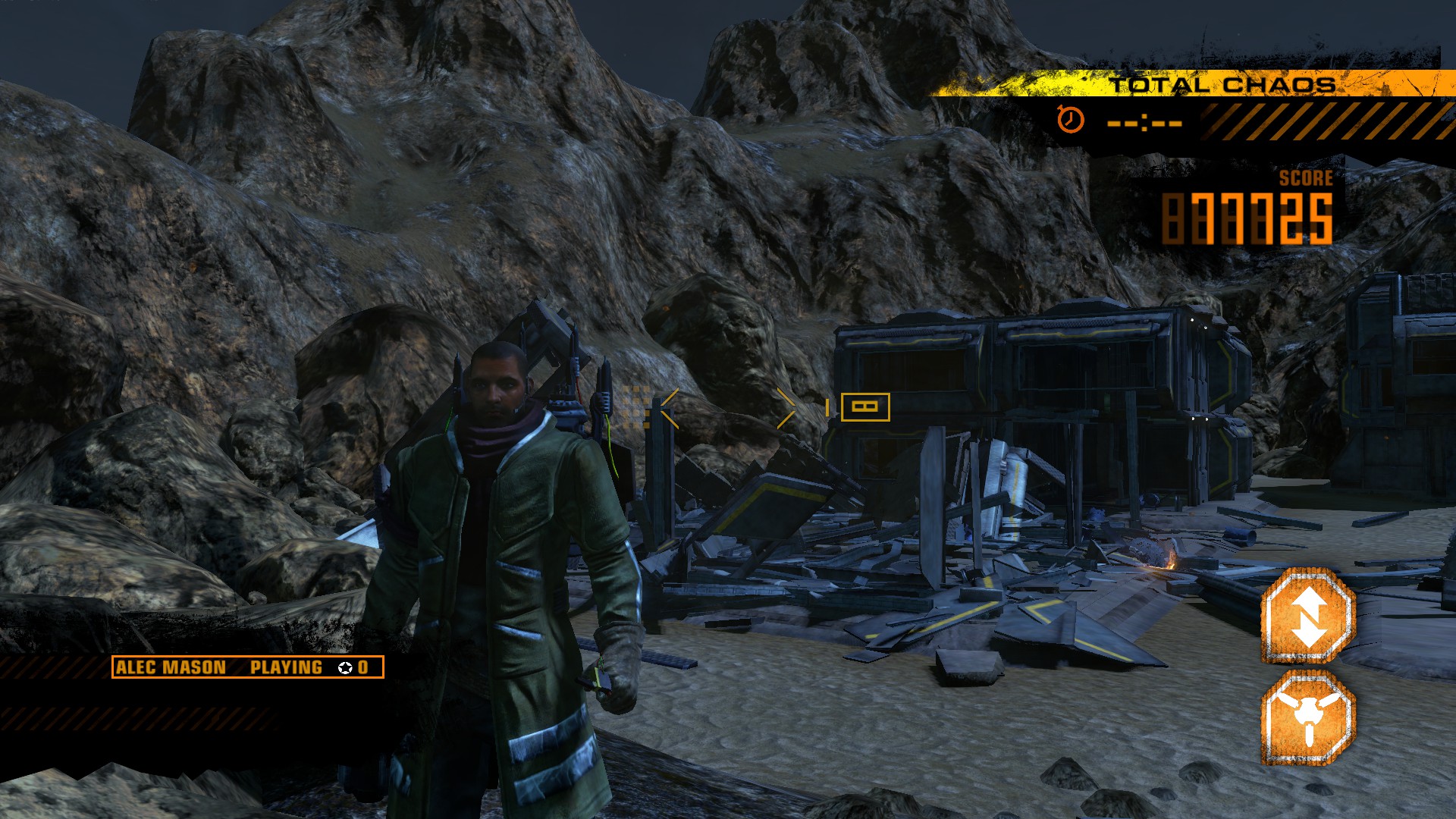 The destruction engine is a thing of beauty. The original development of the game included the input of proper engineers and architects to make sure that the structures within the game would have a somewhat reasonable level of believability to them; encompassing support beams and load bearing portions of a building that could be targeted for destruction. Correctly target these key elements and you can bring even the most colossal military compounds back down to earth in seconds. Your first experience with this gameplay is fascinating, as you seek to learn the secrets of different building materials by way of blunt force – smashing things to better learn what kind of punishment it can take. This is exceptionally rewarding, giving that your boy Alec wields a sledgehammer like a pro.

That, or buildings on Mars are genuinely brittle, shitty things. Given the state of its populace, I can only imagine the builders are mostly on strike.

Beyond this destruction however, is a gameplay experience defined by fairly ‘meh’ gunplay and hordes of mindless enemies. Given the period of the game’s original release (2009), there are no high hopes for the AI of these enemies, as they sort of plod around and half-heartedly seek cover where they can. This can however become fairly entertaining as these same drone-like enemies suddenly become bloodthirsty maniacs behind the wheel of a vehicle, turning themselves into a freedom fighter-seeking missile happy to plough through any obstacle in their thirst for your blood. Couple this with the game’s penchant to throw ever-increasing numbers at you, and the humdrum behaviour is quickly excused as the game feels more arcade-like in its enemy destruction – there are even killstreak indicators to really amp up your efforts.

The surface of Mars is your canvas; the buildings, your paint; the resulting debris – your masterpiece

It’s worth mentioning that visiting an open world, sandbox environment of this kind in the year of 2018 is an eye-opening experience. It puts into perspective just what sandboxes have become in games, and the sheer scope of what they entail. Red Faction: Guerrilla comes from a simpler time, where the concept of making your own fun was less of an eclectic mish-mash of dozens of game mechanics that may or may not be useful at any given moment. Instead it crafts an unassuming landscape with a believable set of denizens, unleashing you to do as you see fit with your focused set of tools. There is no fast travel, no building a base, no liberating outposts, no secret tunnels. There is just Martian dust blowing across a world of disgruntled miners and cartoonishly evil space-cops, and buildings, yearning to be reduced to their base components.

If jacking a military vehicle at hammer-point is wrong, I don’t want to be right

Red Faction Guerrilla Re-MARS-tered Edition is a game that we all deserve, given a second chance to really bring the house down. Any modicum of aggressive mediocrity in the game is easily offset by the sheer absurdity of the moment-to-moment gameplay that emerges so organically. Whether you are breathing in your first whiff of Martian dust, or are a long-time demolitions expert revisiting your old stomping grounds, it’s a title well worth your time.