It’s the way it splatters that matters

Splatoon on the Wii U was definitely one of my reasons for buying the console. A standout title that offered a truly unique experience was exactly the kind of jam I wanted to dig on, yo. Unfortunately, its slapdash ‘lobby’ system had a mean streak that stopped me and my friends enjoying it as much as we could.

As such I stand before you now, two years later, with hope in my heart and ink on my hands.

I love the smell of pink sludge in the morning

Splatoon 2 is a visually delicious game, specialising in a form that many titles are happy to stay far away from: sticky, gooey fluids and all the wetness they can muster. Splatoon 1 did a fantastic job of milking every bit of power it could muster from the Wii U, but Splatoon 2 can really shine with access to the appreciable power of the Nintendo Switch. 1080p and 60 frames per second have never looked so messy – and I mean that in an endearing way. Ink splatters in a vibrant range of colours upon every inkable surface, and enemies too share in the carnage, modelling a beautiful range of war paint before they too explode. You can appreciate it most when you see two different colours meeting, particularly in a mode like Salmon run, where you can see individual ‘rain drops’ of enemy ink interspersed amongst yours own. Rather than just being a colour, it actually looks like a droplet that has disrupted the surface of your colour – simple, but effective.

Beyond this, the game’s amazing stylisation has grown alongside the added power the Switch provides. Added polygons in all the right places have made player models and enemies animate brilliantly, making every post-loss sulk or victory jig great to behold. And with the addition of so many new and unique enemies, they too are awe-inspiring to watch in motion. Hulking bosses emerging from the water during Salmon Run, with all manner of odd and impressive designs, ingenious and oddly logical ink-flinging devices and a vast array of amazing levels all aim to paint a perfect portrait of the twisted and whimsical world of Splatoon.

Ex-popstars are quite bloodthirsty apparently

1080p and 60 frames per second have never looked so messy

Speaking of Salmon Run – how is the hectic horde mode? What I assumed to be a four-player affair turned out to be pleasantly playable with only two people, and after head-butting the learning curve and swearing a tad, I realised it was my own stupid fault that I had no idea what was going on. In the interest of accessibility, the game offers a rich manual of Bosses, their weaknesses and potential hazards that you may encounter while you are trying to steal mutant fish peoples’ young. In action, the game mode is a terrific amount of fun, and a surprisingly robust addition to the Splatoon repertoire. My only criticism comes from the fact that it can only be played in two specific places – either online during set times with it’s own reward system, or in local multiplayer, to which there appears to be no rewards offered for playing. Bragging rights are fun and all, but the difficulty level and the focus on hardcore cooperative play feels like it should provide some kind of acknowledgment – particularly when played in an IRL setting.

The game’s solo campaign is surprisingly fiendish in how challenging it is. Some really clever level design, and a heaped handful of creative mechanics allows the player to really think over how they approach a situation. At one point I actually clued into just how hard I had made a particular engagement on myself, trying to throw an ink bomb in a way that clipped the enemies from behind – not realising that there was an ink roller sitting just to the side, ready to rocket forward and annihilate all the enemies in one go.

So obviously I killed myself to try again.

The bosses within the game are also a clever combo of challenging and hilarious, utilising the games ink-splattering mainstay in new and exciting ways to etch out a win. Splattering neon garbage on sentient loaves of bread to climb a giant oven is never something I imagine I would do in a video game – and that’s just the first boss. It only gets weirder from there people.

Playing online is just as fun as ever, with quick decisive games still reigning supreme. I absolutely have to praise the rotating maps system, because it does ensure that you never spend ages waiting for your favourite map to spin up again. Playing with friends is still fiddly, though helped partially by way of the app. 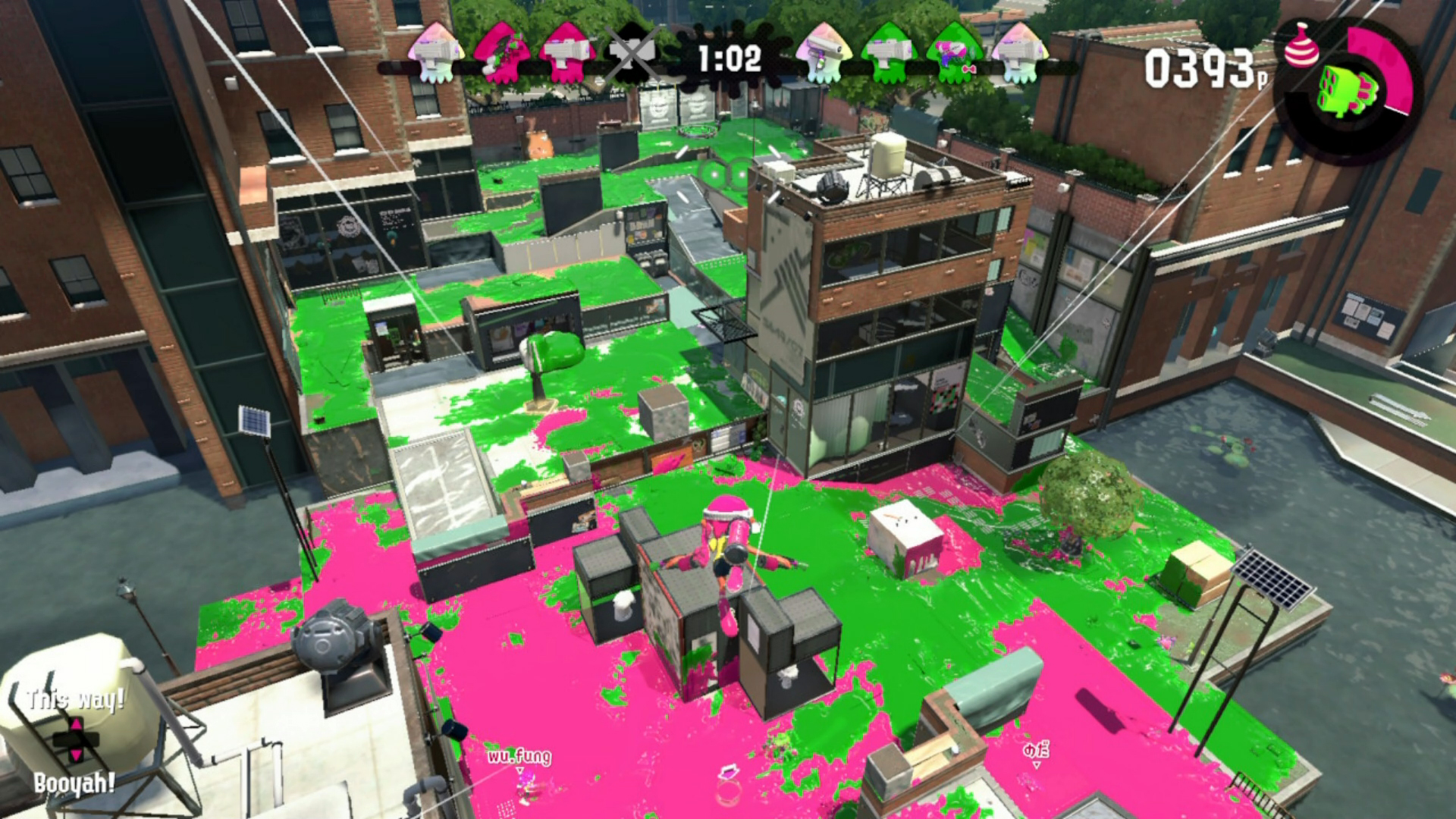 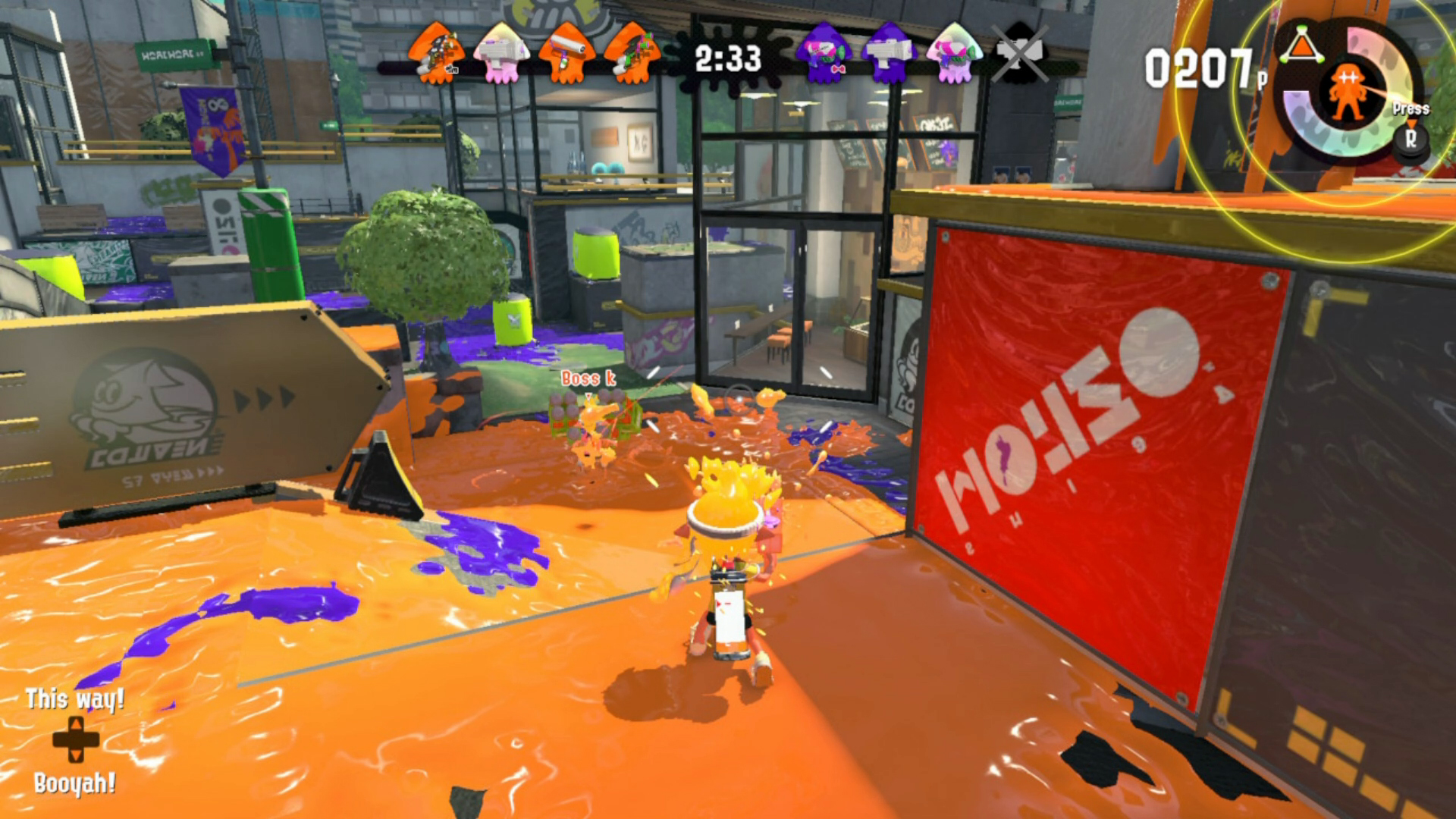 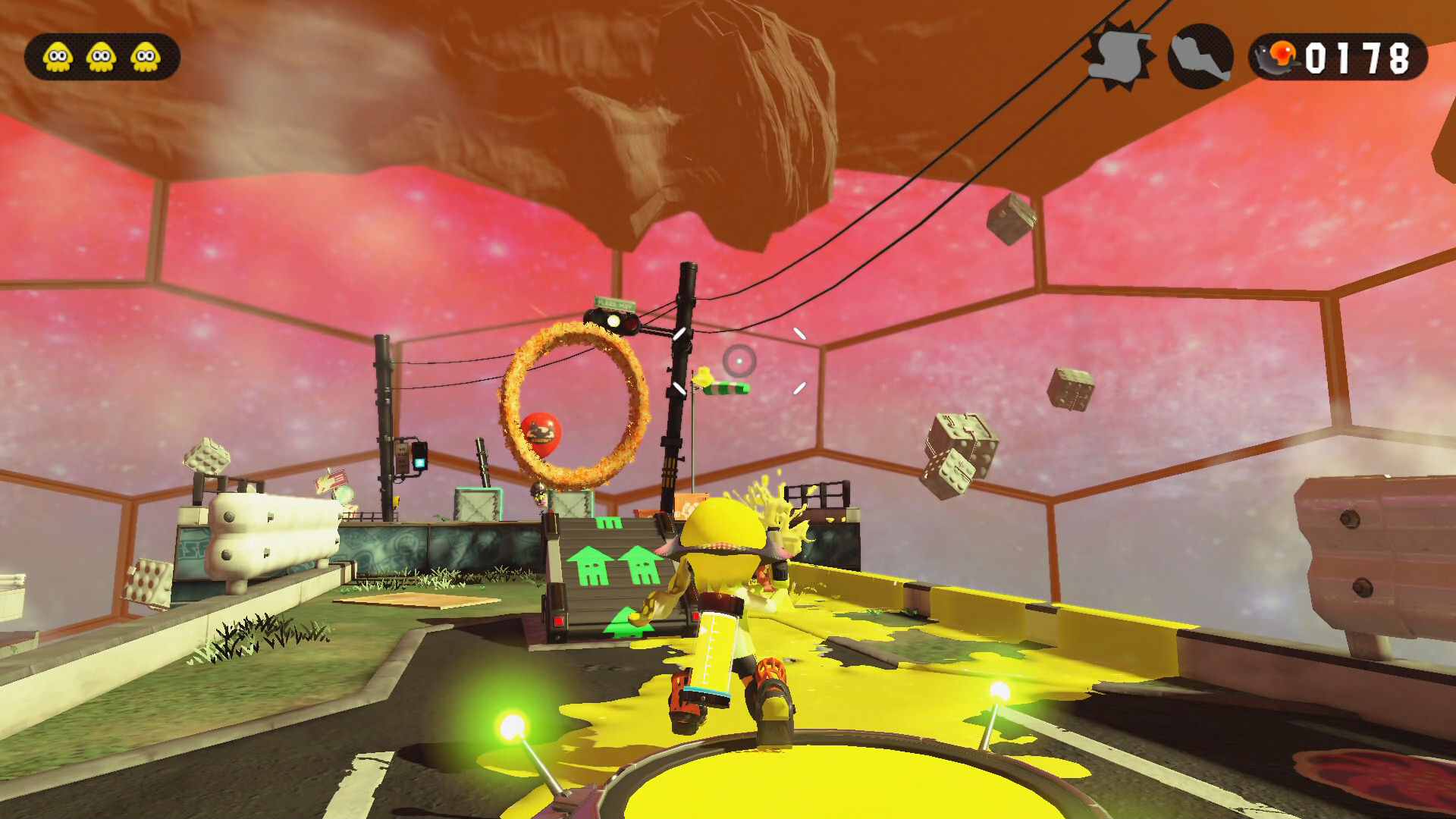 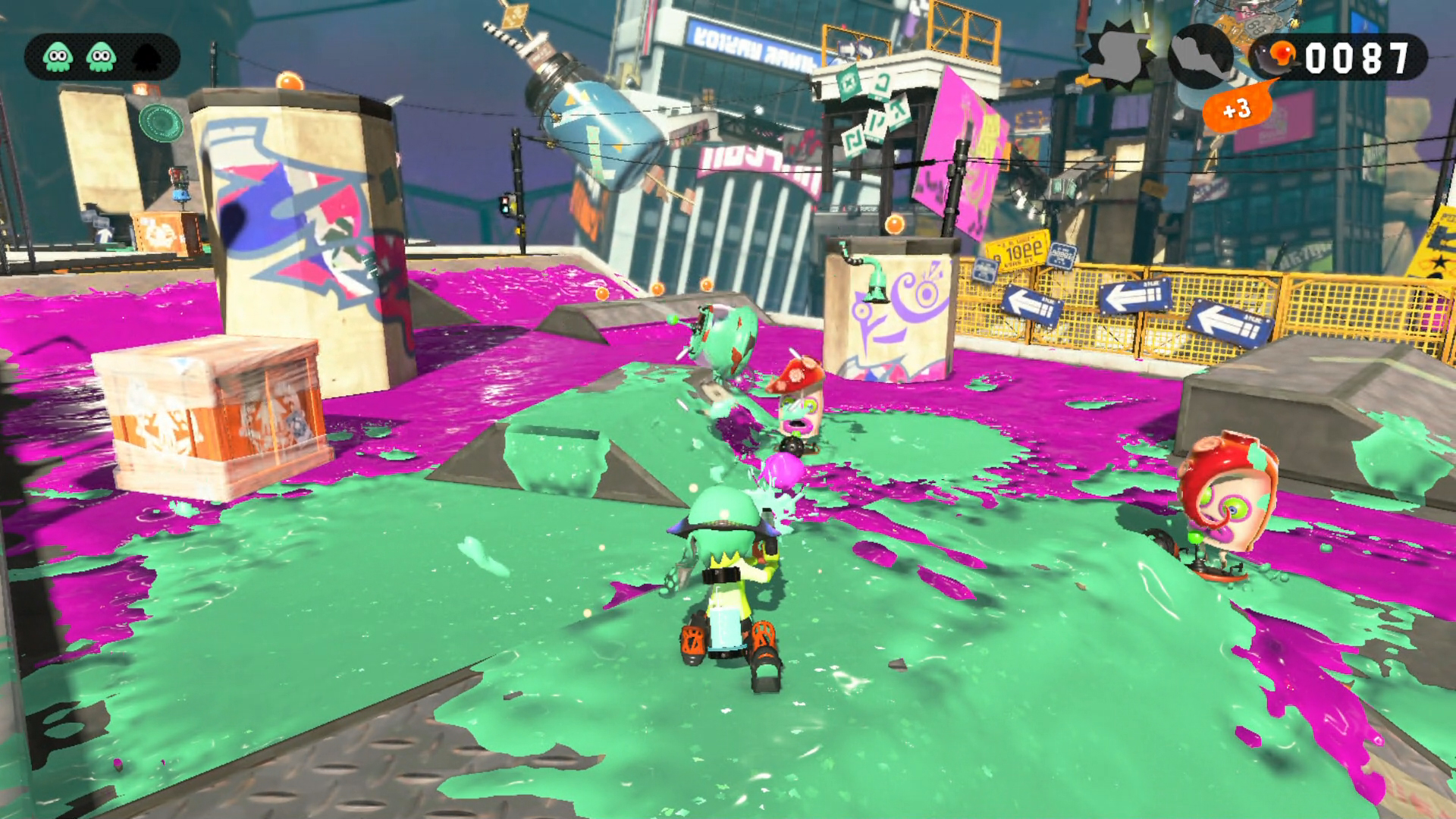 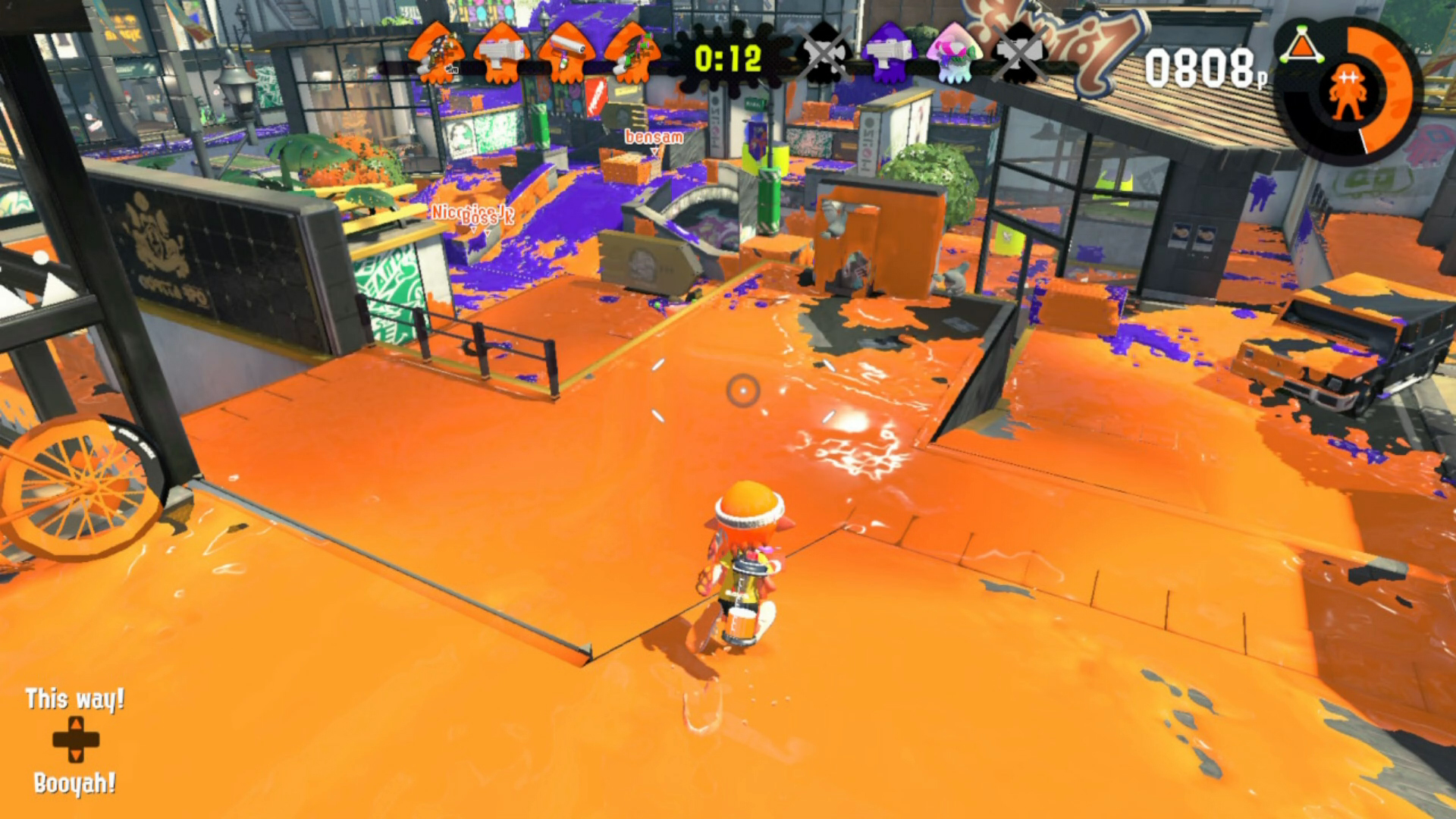 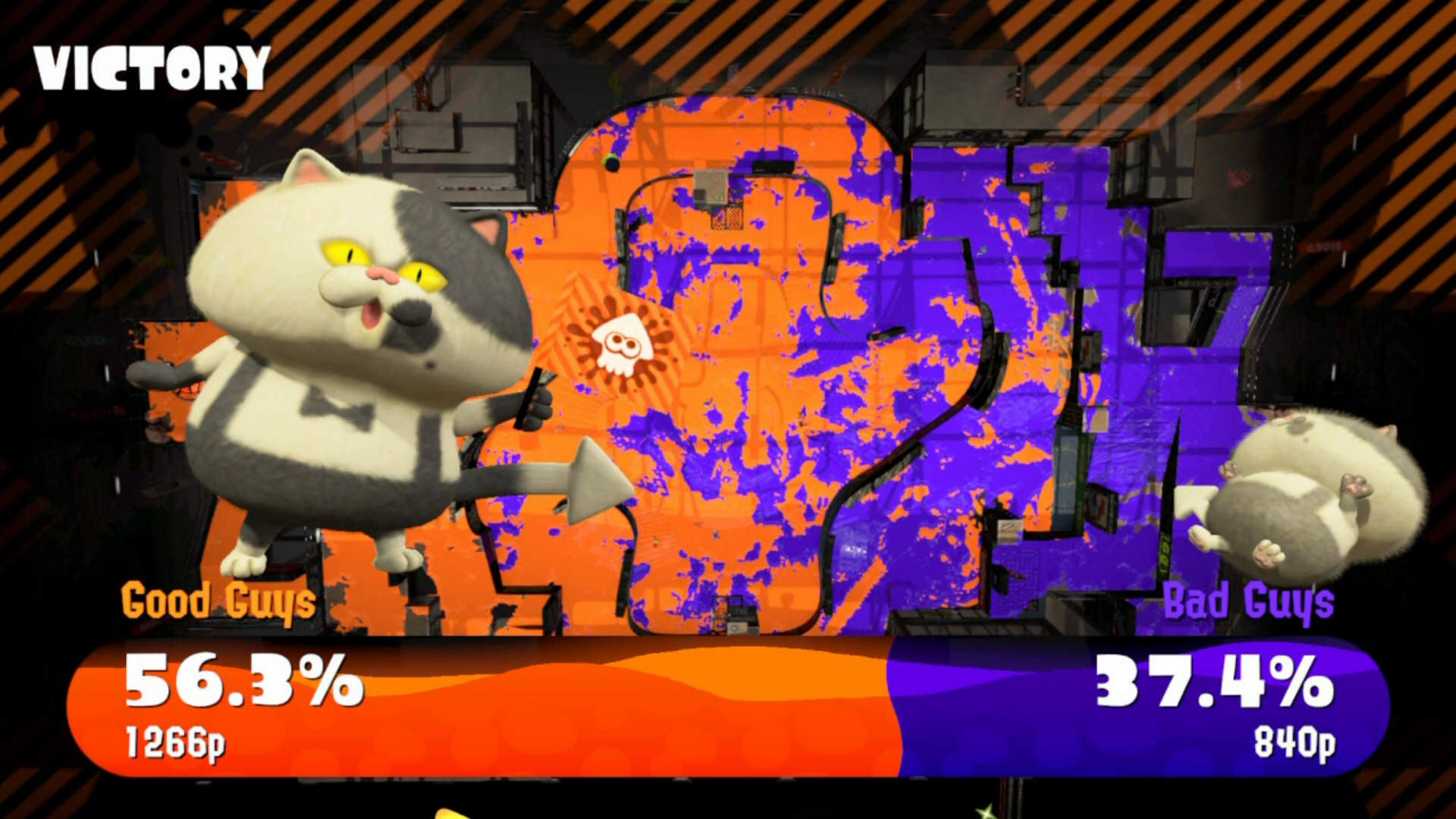 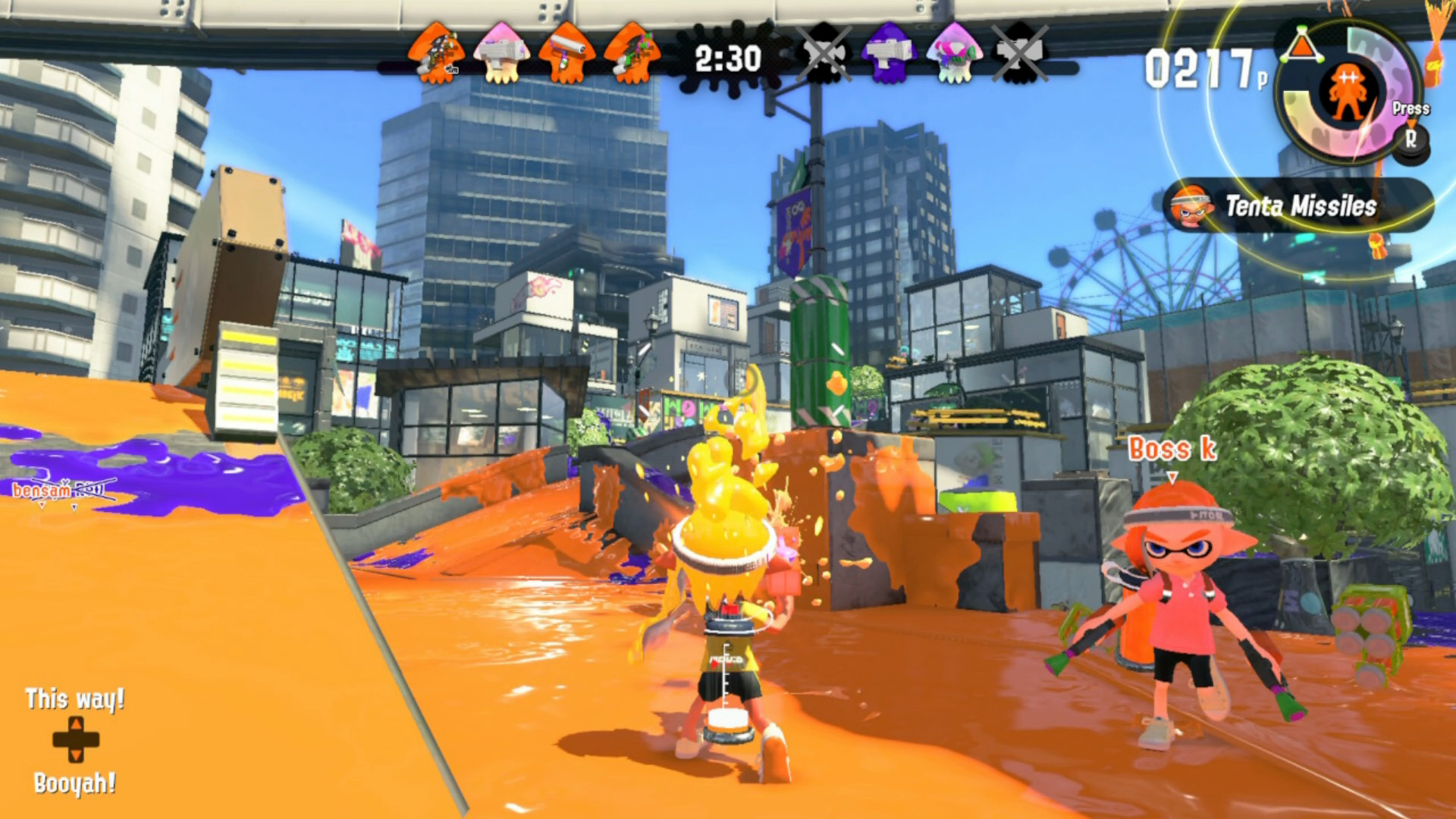 Let’s talk about the app. Alongside the release of Splatoon 2, Nintendo has finally dropped their ‘multiplayer app’ for mobile devices – which allows people some semblance of party management and essential group features such as voice chat. Only it’s really sparse. It’s a conundrum, because on one hand you are grateful to finally HAVE these features, but on the other hand they are not built into the console itself. There have been many discussions about what Nintendo has done to keep the Switch small and focused, and a lot of them are topics regarding what they have chopped out.

To really add shit to the sundae – the voice chat within the app is cut off when your device goes to sleep, and the app doesn’t have inbuilt functionality to prevent that happening (like, say, YouTube’s app does). It’s better than nothing, but I am expecting some heavy improvement in the short term from Nintendo.

Thankfully the gameplay is still amazing, even with the app casting a dark shadow on it. The game modes vary, but will also encourage you to paint everything you can with your war paint – so even if you are terrible at hitting people, you can take solace in the fact that your team still needs an effective floor coater. The sequel totes an impressive arsenal of new weapons and secondary attacks – effectively used as a form of KILL STREAK bonus attack – meaning you are always kept on your toes when approaching an enemy, unsure what kind of hellish ink-flinger they may be packing. I personally eventually hit my stride when I equipped the Splat Dualies, a set of pistols that actually allowed me to perform a short dodge roll when firing. Coupling the high rate of fire of these beauties, with the new knowledge that in squid mode you can basically sit perfectly still in the ink and be undetected – I caught many a squiddo off guard.

TL;DR: I learned how to camp in the cartoon ink shooter game. I am trash.

Usually calling something a ‘by the numbers’ sequel can be considered a detractor, but the numbers for the original Splatoon were exceptional, and Splatoon 2 has built on everything brilliantly. Combining a fresh way to play an existing genre with a new and exciting premise created an environment that is alluring to even the most jaded gamer. Even the stinker of an app can’t dent how enjoyable the game is – this is a title that many people likely bought their Switch for, and I can’t blame them for it one bit.

A sentient bread monster, living in an oven. Sure, why not.