As a pretty big fan of nearly everything that Nintendo puts out, I can say with certainty that I’ve never really enjoyed Super Smash Bros. as much as I’d like to. Don’t get me wrong, I love that it exists and that it’s as successful as it is. I love the fanservice and the spectacle, and the way it manages to bridge the gap between the hardcore fighting game community and more casual, social players. The thing is, it’s just not my type of game. More importantly, I’m really not very good at it. I’m bad at it. Bad.

So when Nintendo invited members of the gaming media and community to go hands on with the upcoming behemoth release that is Super Smash Bros. Ultimate in Melbourne this past week, I was in two minds. Part of me was excited to see how the series has evolved in its move to the Nintendo Switch and to check out some of the new content, but the other part of me was worried I was just going to make a fool of myself. What if I just had my arse repeatedly handed to me by a room full of Smash geeks? How will I know what makes this game good if I didn’t play much of the previous ones?

Look, in all honesty, there’s not a lot I can write about my experience with Super Smash Bros. Ultimate that will be new to anyone who’s been following the game. It’s still Smash Bros, which is to say it’s a continuation of the same formula that Nintendo and its various contracted studios have been slowly perfecting and refining since pretty much nailing it with Super Smash Bros. Melee. This hands-on opportunity was less about showing off new features, or convincing anyone of the quality of the game, and more about reminding people just what makes Smash Bros so compelling as a shared experience. It’s a game that’s just as much fun to watch as it is to play, and that applies whether at a competitive or a social level. In fact, there were several moments at the event where I had vivid flashbacks to a couple of Red Bull-fuelled high school nights being absolutely pummelled by my friends using the very same characters, on the same stages, with the same controllers.

Yes, much to the delight of the room, Gamecube controllers were on hand for the demo. They were, in fact, the very same controllers that will be going on sale alongside the game when it launches. They’re very much identical to the ones that were sold with Super Smash Bros. for the Wii U aside from an updated logo in the center, which also means the Wii U iteration as well as original Gamecube controllers will all work just fine with the Gamecube controller adapter. This will obviously be the preferred way to play for Smash veterans and purists, and anyone who still carries a torch for Melee, but it should come as no surprise that the Switch’s fantastic Pro Controller is also a great way to play. Joy-Cons weren’t on hand in any configuration though so I’m very interested to see how they perform in comparison.

The most ambitious crossover event in history

The big draw for this next iteration in the Smash Bros. series is that it collects pretty much all of the characters, stages, music and other content from previous entries in one game while also adding even more new stuff. That’s not something I could really dive into with a short hands-on session on a demo build of the game, but I did at least get to try out some of the new fighters and stages. Unfortunately the timing wasn’t right for Simon Belmont or King K. Rool to be on show, but I played with both Ridley and Inkling, both of which took some getting used to (especially for a filthy casual player like me). Ridley in particular felt unwieldy to me, being a larger character who is still fairly quick and technical, but for that same reason he was an absolute powerhouse in the hands of some of the better players and should be pretty exciting to watch at a competitive level. Of the brand new stages that were on show, Moray Towers (of Splatoon inspiration) was probably the most fun, and the Great Plateau stage from Breath of the Wild looked absolutely gorgeous. 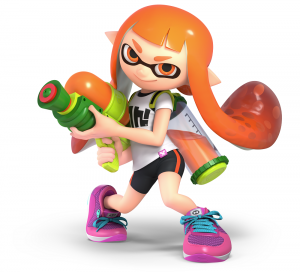 By that token, the thing that stood out to me the most about Super Smash Bros. Ultimate is just how impressive it looks. Granted, it’s not as though it’s had any kind of radical facelift since the last game. Much like the game’s other qualities, the dev team have elected to add a thousand layers of polish on the existing framework rather than attempt to drastically overhaul anything, and Smash has a pretty well established visual DNA at this point anyway. The result though, is some of the most impressive and rock solid presentation that I’ve seen on the Switch. One of the console setups at the event was running on a TV twice the size of my apartment and the game looked sharper and more fluid than it had any right to, running on what is ostensibly a portable console. I would’ve loved to see what it looked like in portable mode too, but unfortunately that wasn’t on show.

“So did you win any matches, Kieron?” I hear you (not) asking. The answer is yes, I did. Quite a few, in fact. I’m not going to suggest it was for any reason other than dumb luck, but I actually had a pretty solid run, and you know what? I had a lot of fun, too. Super Smash Bros. Ultimate is shaping up to be a greatest hits compilation of one of Nintendo’s most revered franchises where the ‘greatest hits’ are literally all of them. Even from my small sampling of the promised smorgasboard of content that’ll ship with the full game, I can almost guarantee that the Switch has a new killer app on its hands. So there it is, Super Smash Bros. Ultimate made a believer out of me, and I wasn’t horrible at it. Perhaps those two things are related.