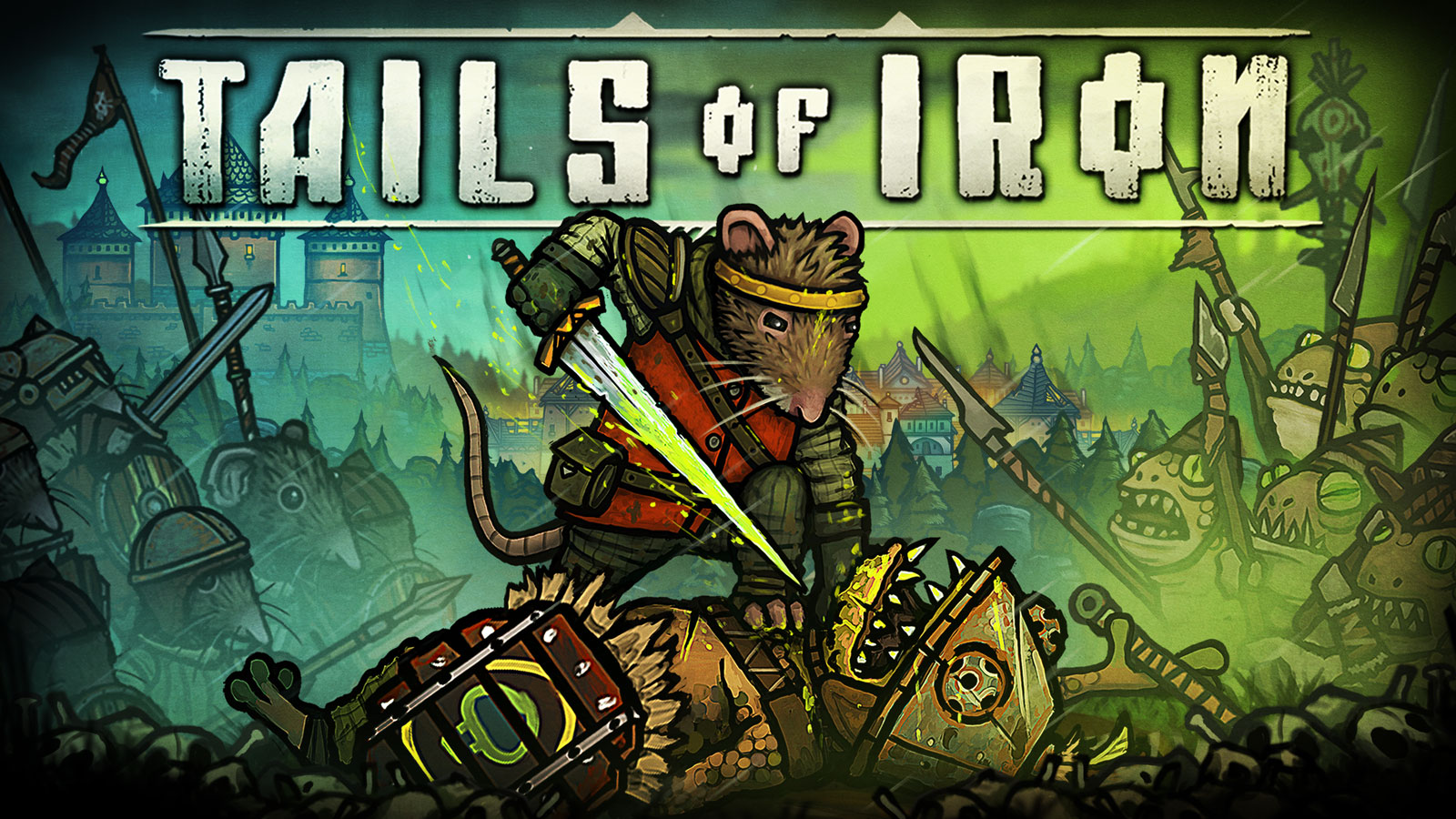 Growing up on a diet of Teenage Mutant Ninja Turtles, Street Sharks, and Redwall I developed a love for anthropomorphic warriors, which has carried across into my taste in video games. Every now and then a video game comes along featuring a rat protagonist in a premise and setting that makes my whiskers tingle, and the latest one to do so is the 2D side-scrolling action-adventure RPG Tails of Iron from Odd Bug Studio and United Label. The only catch – the game’s Souls-inspired brutal challenging combat, a genre that has had my measure numerous times. But I was ready to step up to the challenge and help my rat brethren.

The game’s story follows the journey of a young rat named Redgi who is one of the heirs to the Rat Throne. One day after defeating his brother in a fight to see who would be crowned the next king, Redgi’s kingdom is invaded by an evil frog army led by Greenwart who murder countless innocent rats, including his father, King Rattus. Redgi survives the invasion and vows to not only restore his kingdom to its former greatness but avenge his father’s death and eliminate the frog threat once and for all.

Tails of Iron has many drawcards, but perhaps the most alluring of all is the game’s art style, which utilises a hand-drawn style that looks like a medieval storybook – it’s simply phenomenal. It’s inspired by Eastern European woodblock printing and it’s a style that suits the game perfectly. All the detail that has gone into the backdrops, locations and character designs is incredibly impressive. Redgi’s journey will take him to four different towns, meeting various species of friends and enemies on the way, and every location in the game has a distinct tone and I cannot praise the artists enough for their work. It’s as if Brian Jacques (Redwall) and the Brothers Grimm got together for a few flagons of mead and mixed their ideas. It’s honestly one of the best art styles I have ever witnessed in a video game.

While the characters themselves don’t speak, they do utter noises, such as a flat flute note, that is accommodated by a speech bubble that will display a picture that indicates what is being discussed. However, another drawcard is that the story is narrated by Doug Cockle of Geralt of Rivia fame. Narration is a tricky thing to get right in video games as it can become overbearing and just flat out annoying, but Cockle nails it with his performance – there’s just something innately satisfying about defeating a boss and hearing Cockle’s raspy voice tell you about it. Given the game’s storybook art style, it’s easy to picture Geralt of Rivia reading a Tails of Iron book to a young Ciri as she falls asleep. Credit must also go to the developers for the way they have designed the narrative, because Cockle’s input isn’t frequent enough to overshadow it, instead it enhances it.

To push the narrative forward, players will have to complete objectives of the primary and side variety. There’s no levelling system here, however Redgi will earn gold and other resources he can use to purchase items from completing objectives, as well as weapons and armour. Blueprints can also be bought and collected throughout Redgi’s journey, with his brother blacksmith able to craft them. Other resources such as food items can be given to the chef (another of Redgi’s brothers) to make delicious meals for Redgi to feast on and to give him a health boost.

This art style is absolutely incredible

If there’s one thing I hate about RPGs, it’s sidequests that are included to simply pad out a game’s length. Tails of Iron walks a fine line at times, as some quests are fairly similar and generic – such as quests that require you to eliminate a nest of enemies or fight enemies in an arena, but thankfully they’re usually quite brief (they can usually be completed in under 10 minutes), meaning they never feel like they’re weighing the experience down. Rolling credits took me around 11 game hours, which probably equals around 15 hours with deaths and restarts factored in.

The final drawcard is the game’s combat which is inspired by the Souls genre. While it won’t make Souls veterans sweat like they’re on an episode of Hot Ones, for someone like me who usually lacks the patience and discipline this style of combat requires, I found the challenge had a great balance between whipping my arse consecutively and making me feel like an invincible rat god. I’m not ashamed to admit that on several occasions I gestured to the TV after finally defeating a boss who had been roasting me for a good 30 odd minutes.

The combat system utilises a colour-coded system that will indicate whether players must dodge, block or parry. It’s simple enough on paper, but in practice when enemies are coming at you in numbers or you’re trying to find pockets of safety to heal yourself (which is done by drinking bug juice from a flagon), it can be a challenge. And it’s not just frogs that Redgi will duke it out against, with Grubs, Mozis (mosquitos), Moles, lizards and zombie rats all trying to take the king out, with each species having its own attacks.

Thankfully Redgi has access to a slew of weapons, with our rat king able to wield three weapons at any one time – a one-handed, two-handed and a ranged weapon. One and two-handed weapons vary between swords, axes, maces and spears, whereas ranged weapons include bows, crossbows and guns. Despite Redgi’s limited number of attack moves, the mix of weaponry means that it never feels like you’re using the same attack on repeat. Furthermore, players can add poison to their blade to deal extra damage. Above all, the combat is incredibly satisfying, with the animations and executions being particularly impressive – just watching blood spurt from enemies before decapitating them is a joy to watch.

Much like any RPG, players will be able to choose their loadout and will need to balance the weight of it between mobility and defence, with armour and weapons each having their own weight rating. Moreover, some pieces of armour will offer greater resistance to particular enemies, so you’ll be frequently adjusting your build. I preferred a lighter build to give me greater mobility given I was frequently on the move.

While Tails of Iron is certainly a challenging game, there is a generous amount of save points scattered throughout the kingdom, and the game will autosave when you start a quest or change your loadout. It means that you usually don’t have to go too far without saving, so when you do die the punishment isn’t massive. Furthermore, usually next to save points Redgi will have access to a vault of sorts to change his loadout, a keg of bug juice to refill his flagon, as well as barrels of arrows/bullets and poison to restock for the next encounter, which encourages players to make full use of their inventory without fear of reprise.

Souls-like games have never been my thing, so I was a little apprehensive going into Tails of Iron as I have had to wave the white flag before. But I am glad I took on the challenge because Tails of Iron’s mix of medieval storybook art, Souls-inspired combat and Geralt of Rivia’s voice makes for an incredible experience – one of the best of the year. 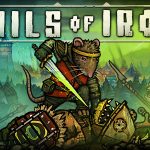 Tails Of Iron Review
Kingdom Come Deliverats
Backed by a stunning art style and the voice of Geralt of Rivia, Tails of Iron is an excellent action-adventure RPG that offers a challenging yet satisfying Souls-inspired experience in a captivating medieval world.
The Good
Incredibly beautiful hand-drawn art style
Outstanding narration from Doug Cockle that enhances the story
Combat is challenging but satisfying
Animations and executions are smooth and visceral
The medieval setting is amazing
The Bad
Sidequest objectives are a touch repetitive
9.5
Bloody Ripper

Tails Of Iron Review
Kingdom Come Deliverats
Backed by a stunning art style and the voice of Geralt of Rivia, Tails of Iron is an excellent action-adventure RPG that offers a challenging yet satisfying Souls-inspired experience in a captivating medieval world.
The Good
Incredibly beautiful hand-drawn art style
Outstanding narration from Doug Cockle that enhances the story
Combat is challenging but satisfying
Animations and executions are smooth and visceral
The medieval setting is amazing
The Bad
Sidequest objectives are a touch repetitive
9.5
Bloody Ripper
In this article:doug cockle, Geralt of Rivia, odd bug studio, redwall, tails of iron, the brothers grimm, united label, Zach Jackson