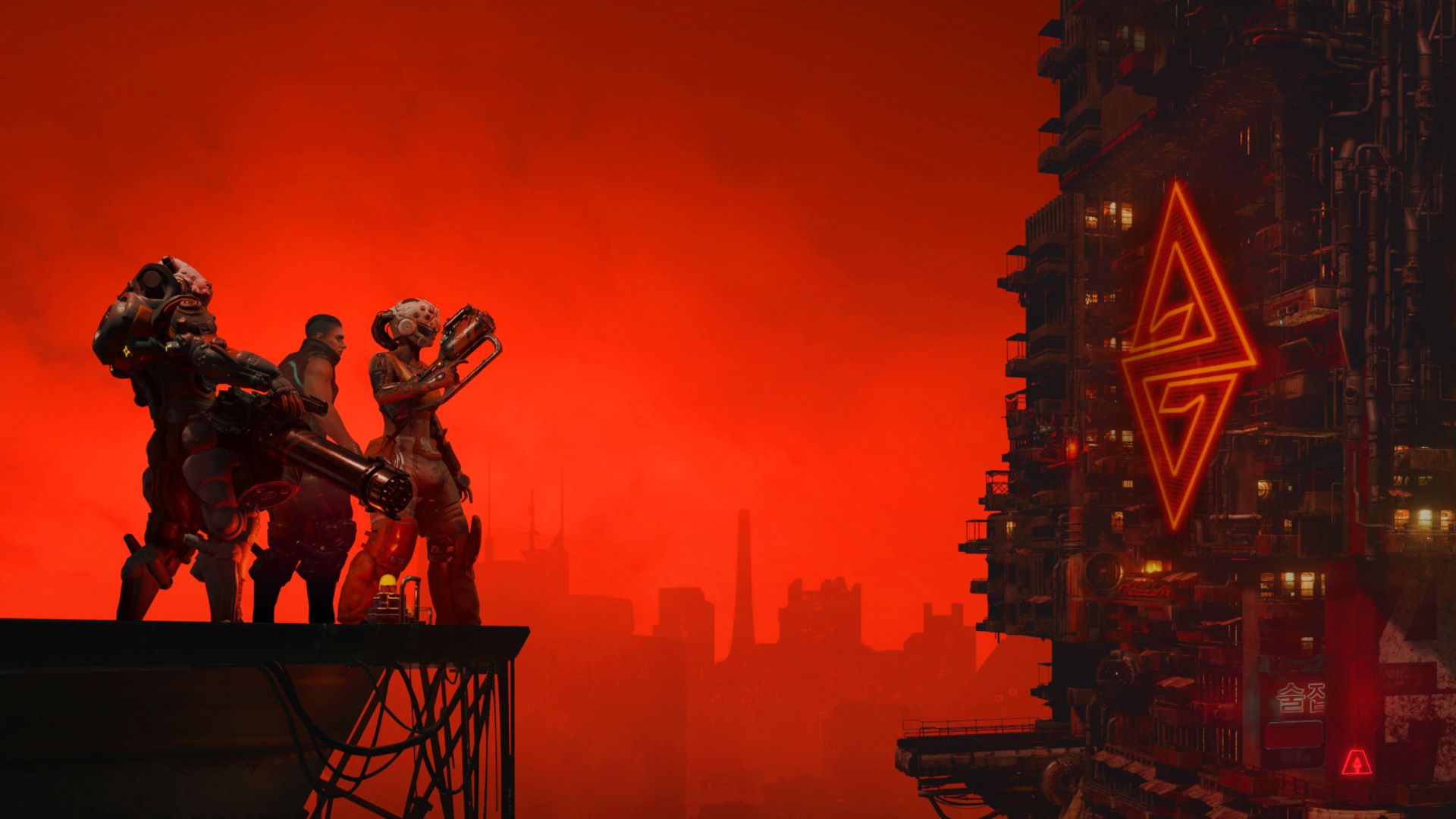 It’s very rare that we see a representation of the far future in any medium where people of all creeds and colours are skipping around holding hands under a gleaming rainbow. The future will be dank, dirty, treeless and soaked in neon if the cyberpunk genre has anything to say about it. Neon Giant’s The Ascent is the latest video game foray into the bleak future, placing us on a planet teaming with indentured slaves to powerful corporations, where the vast bulk of its citizens toil away in the depths of gargantuan arcologies to work off their insurmountable debts. It’s a perfectly serviceable cyberpunk setup that’s communicated well in an aesthetic sense, and there’s some competent twin-stick shooter gameplay to pair with all the grittiness, but where The Ascent struggles is in capturing the elusive soul of a proper cyberpunk experience. If Miley Cyrus is correct in saying that it’s the climb that matters, then The Ascent ends up a little bit more of a plateau.

After a fairly basic character creation section, you are thrust into the shoes of an indentured labourer (affectionately known as Indents) on the planet of Veles. Lured by the promise of a better life, Indents end up on Veles by first racking up a sizeable debt for their ticket, a debt they must work off performing dangerous and menial labour in the depths of behemoth megactities housing millions just like them. With the corporations responsible for arbitrating the debts constantly shifting the goal posts, the best an Indent can hope for is to find a small shred of satisfaction in shared misery with other Indents.

The Ascent has an intriguing setting, but at the end of the day it trudges down the fairly well-trodden narrative path of corporate slavery and corruption, and doesn’t really have too much of import to say on the subject. There are clear inspirations drawn aesthetically from cyberpunk classics like Blade Runner and Total Recall, but it ends up more on par with the bizarre Super Mario Bros film in terms of actually exploring the depth of its subject matter. It doesn’t help that your mute protagonist has zero sense of purpose or place in the world, and this actually makes it kind of worse; you are essentially a mindless killing machine at the whim of whichever corporation or entity is pulling your strings, about as self aware and reflective as a cloned loaf of bread. A convoluted story that relies on jargonistic technobabble and lacks interesting characters or ideas seals the deal unfortunately, and while it’s clear the developers have constructed a fair bit of lore around the game, you’re going to have to dig around in its Codex if you want to piece it all together, rather than having the game actually present it in any organic fashion.

The Ascent has an intriguing setting, but at the end of the day it trudges down the fairly well-trodden narrative path of corporate slavery and corruption, and doesn’t really have too much of import to say on the subject

In the future, the real threat is Vitamin D deficiency

But this is the cyberpunk future, a morally destitute and lawless wasteland, and that means you get to kill things. The action-RPG twin-stick shooter hybrid gameplay is definitely the highlight of The Ascent, managing to keep the game more or less on an even keel. There’s a decent array of punchy guns to pulp your many enemies with, and you’ll also gradually unlock augments which give you powerful abilities on cooldowns powered by an energy resource, as well as special deployables such as shock grenades, turrets and healing fields. You’ll probably spend the first couple of hours wondering when the more interesting weapons will show up, but it’s kind of a slow burn in this regard. As is customary in a twin-stick shooter there’s an emphasis on mobility, with a handy dodge roll to position yourself advantageously amongst the swarms of enemies. But one of the more interesting mechanics is actually being able to take cover by crouching behind low barriers and then shoot from behind it. The idea of staying still seems like heresy in a twin-stick shooter, and it’s not heavily relied upon for the most part, but as you become accustomed to it you will find that some of the tougher sections require you to play a little smarter, and hunkering down rather than running around like a headless chicken can be the best means of survival.

Feeding into all the combat and mobility are some rudimentary RPG mechanics where you spend skill points upon levelling up on things like improving evasion, increasing health or energy reserves, and decreasing reload speed. It’s not exactly reinventing the wheel, but it gives a decent sense of burgeoning power amongst the mindless slaughter. Weapons can also be upgraded at gunsmiths by finding universal upgrade components strewn about, and this is essential for later fights. Unfortunately, upgrading only increases raw damage output and absolutely nothing else, so don’t expect that shotgun to start shooting explosive chickens instead of bullets any time soon. In general the game feels like it prefers to have its weapons and combat feel pared back a bit, never really committing to a full bullet hell-style experience or embracing the chaos that it possibly could. This is with the notable exception of the frantic final encounter, which I can fully admit had my palms sweatier than Mom’s spaghetti in the heat of a rap battle. It gives a glimpse of a style of game that this game might have been, but whether or not such a style would be sustainable in the context of The Ascent is debatable. The game admirably and consistently prefers to stick to its guns and be its own distinct brand of twin-stick shooter, and you can’t really argue with that.

While the business of killing swathes of enemies is good, and the rhythm with which you dispatch them becomes almost meditative, some of the stuff in between is notably less awesome. Quests will have you dragging yourself backwards and forwards across areas you’ve already traversed dozens of times, filled with weak enemies you’ve obliterated many times over. The pain of backtracking is particularly felt when completing side quests, which boil down to monotonous fetch and kill quests devoid of any sign of inspiration. The confounding layout of the various hubs, woeful train system, and weirdly expensive yet still limited taxi system don’t help much either. The expense of the taxis shouldn’t really deter you though, because you’ll make a ton of money with very little of worth to actually spend it on that isn’t dropped by enemies.

Backtracking may be a chore, but at least the world in which you do it is quite beautiful in an all hope is gone sort of way. Some really nice lighting and particle effects work pretty darn hard to bring the steamy, sleazy, neon-soaked neo-noir streets to life and also make the combat feel visceral and explodey in all the right ways. The civilian count is also amazingly quite high, giving spaces a lived-in vibe, and kind of makes you feel bad when they frequently become collateral damage. The sound also gets a tick, with a low-fi synthwave soundtrack appropriately filling out the quieter sections, fluctuating into pumping techno beats once the bullets start flying. Sometimes however the audio can get jumbled and chaotic gunfire and screaming can play out in a loop when there’s actually no danger present. These hiccups are consistent with a slight sprinkling of technical jank throughout, with things like texture and asset pop-in fairly frequent also. I also had a couple of instances of having my gun refusing to fire and quest markers leading me to dead ends that required a restart to fix.

In general the game feels like it prefers to have its weapons and combat feel pared back a bit, never really committing to a full bullet hell-style experience or embracing the chaos that it possibly could

Unfortunately, due to the fact a virus causes my current home city of Melbourne to go into lockdown every other week, I wasn’t able to test out the co-op. It supports up to four players either locally (not recommended in Melbourne unless you want to get a stern talking to by Dan Andrews) or online, and I’ll update my review over the next week to see how that fares in the grand scheme of things. The game absolutely works as a solo experience though, so don’t worry if you’ve got no friends inside the 5km exclusion zone or don’t care for online play.

As with many Microsoft exclusives in the modern era, it feels like there’s an unfairly heavy weight of expectation, given the raging success and quality of its rival’s exclusives. Perhaps people are expecting this game to set the world on fire, and those people are likely to be disappointed, but for a title that’ll set you back about $30 (or cost you nothing on Game Pass), made by a small passionate dev team of 12, I think The Ascent manages to do a lot. It may not be the most cerebral piece of fiction to feature a cyberpunk world, and some of the world navigation and quest writing leaves a lot to be desired, but if overall enjoyment is the meter by which we are to judge then I can say my time on Veles was well spent. 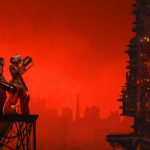 The Ascent Review
It's The Climb
The Ascent nails the cyberpunk aesthetic but doesn't really attempt to capitalise on its themes of corporate slavery. The solid audiovisuals and competent action-RPG twin-stick shooter hybrid gameplay manage to glue the experience together, even when glaring flaws such as lacklustre quest design and an overreliance on backtracking threaten to derail it.
The Good
As a cyberpunk game, it looks and sounds the part
The twin-stick shooting has a distinct pared-back style that works
Your arsenal grows slowly but meaningfully
The Bad
Error 404: Cyberpunk soul missing in a convoluted and shallow story
Sidequest design is downright terrible and uninspired
Far too much backtracking required, with an inadequate fast travel system
Audiovisual bugs abound
7
Good

The Ascent Review
It's The Climb
The Ascent nails the cyberpunk aesthetic but doesn't really attempt to capitalise on its themes of corporate slavery. The solid audiovisuals and competent action-RPG twin-stick shooter hybrid gameplay manage to glue the experience together, even when glaring flaws such as lacklustre quest design and an overreliance on backtracking threaten to derail it.
The Good
As a cyberpunk game, it looks and sounds the part
The twin-stick shooting has a distinct pared-back style that works
Your arsenal grows slowly but meaningfully
The Bad
Error 404: Cyberpunk soul missing in a convoluted and shallow story
Sidequest design is downright terrible and uninspired
Far too much backtracking required, with an inadequate fast travel system
Audiovisual bugs abound
7
Good
In this article:curve digital, cyberpunk, john leguizamo, Microsoft, Neon Giant, The Ascent, total recall, xbox