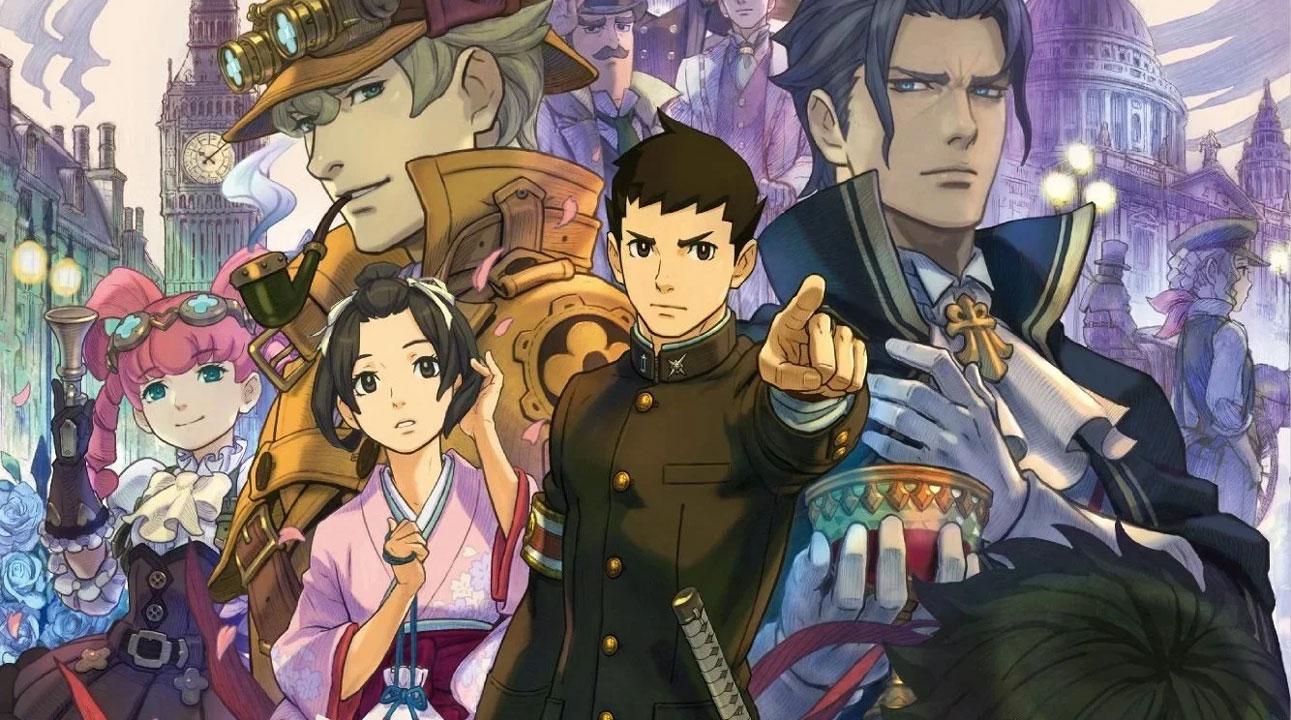 What better way to dip my toes into the Ace Attorney series than with a collection of two newly-translated and remastered prequel titles? That’s what I asked myself going into The Great Ace Attorney Chronicles, a double-header of 3DS and mobile titles ported to modern consoles that’d never seen release outside of Japan before now. It’s a series I’ve always been quietly interested in checking out, so why not take the opportunity to play these for review? I’ll tell you why – because now I’ve added a whole new franchise to my growing pile of shame.

The words ‘legal drama video game’ might not spark immediate interest in anyone unfamiliar with the Ace Attorney titles, but they’ve a strong following for a reason. Intriguing murder cases, tense courtroom battles, dry wit and a flair for the dramatic are hallmarks of the series. Resting firmly in the visual novel/adventure genre, each game has players take up the role of a defense attorney tasked with proving a series of clients’ innocence by investigating crime scenes and cross-examining witnesses. While the mainline Ace Attorney games star Phoenix Wright as their primary defense lawyer in a modern setting, The Great Ace Attorney Chronicles takes us back to the turn of the 19th/20th century with Wright’s ancestor, Ryunosuke Harunodo. Ryunosuke’s journey starts in Japan as he studies to become a lawyer in Japan’s still-forming judicial system, with the goal of travelling to Great Britain to complete his studies among the world’s greatest courts of law.

I’ll avoid going into any great detail on what Ryunosuke’s journey across both games entails, save that his befriending of a famous and great London detective named Herlock Sholmes (yep) proves a turning point in his career and sets up his earliest cases across the first game, The Great Ace Attorney Adventures. Both games are split up into five episodes, with each bringing a new case while carrying the broader narrative along, and in the first game it all comes full circle by its fifth and final episode with a drama-filled finale set up by much earlier events. Meanwhile the second game The Great Ace Attorney 2: Resolve, ups the stakes in the aftermath of some of those previous revelations and brings a number of its predecessor’s secondary characters back into the fold. It launches with something of a soft reset that sees someone other than Ryunosuke take the role of defence counsel, but it’s a mercifully-snappier introduction to proceedings overall for Resolve’s early episodes.

By far The Great Ace Attorney’s biggest strength, and what I’ve been led to believe is the biggest draw for fans of the series, is its writing and characters. These two titles have had fans crying out for an official translation, so it’s with pleasure that I can report said translation is fantastic. Navigating not just the dark and morbid subject matter of grisly murders, but the tense and oft-uncomfortable power dynamic between Great Britain and Japan in the era is no mean feat, but it’s delivered with enough tact that the game’s penchant for wit and slapstick humour doesn’t feel out of place or gross. In fact it’s routinely hilarious, which is praise for both the comedic timing in its prose as well as its menagerie of utterly ridiculous characters.

Characters like Herlock Sholmes, Britain’s dashing and brilliant detective with a disgustingly short attention span and a habit of springing up just about anywhere. Or the enchantingly handsome and brooding, wine-glass-smashing, legendary prosecutor, Barok van Zieks. Even bit-part players like each case’s witnesses, jurors and perpetrators are all an eclectic and memorable bunch with their own quirks, tells and cartoonish personas. The sheer amount of reading this pair of 30-plus-hour games requires could have been a right slog, but when every word is as compelling and chaotic as it is here it never gets old.

The majority of the Great Ace Attorney’s events are delivered in two distinct gameplay varieties – investigations and courtroom sequences. The former sees you navigate a selection of areas to explore, conversing with standers-by and scouring for clues until you’re able to push the narrative along, much like any adventure game. Here, you’re also introduced to these two titles’ most unique take on the series formula. Sholmes’ flair for the dramatic often leads him to Logic and Reasoning Spectaculars – self-congratulatory displays of his powers of deduction. These are incredibly fun to witness as not only is Sholmes wildly-entertaining in his own right but you get to watch him, in real time, blow straight by the actual clues in the case and still reach something approaching the correct conclusion. It’s then up to the player to go back over these presentations and find the actual clues in amongst Sholmes’ chaotic reasoning.

The series’ bread and butter of course, is the drama of its courtroom warfare and The Great Ace Attorney Chronicles knocks out some belter battles in the stands. As a defence lawyer, it’s up to Ryunosuke (most of the time…) to cross-examine each crime’s witnesses to poke holes in the prosecution’s argument and eventually prove his client’s innocence. This typically involves listening to testimonies, and then breaking them down statement-by-statement to compare with evidence gathered in the investigation sequences. Disproving the validity of witness statements, presenting and further obtaining compelling evidence and keeping a colourful cast of jurors on-side is tantamount to success in the courtrooms of Japan and Great Britain. It’s enormously captivating stuff, each new case throwing enough surprises into the otherwise-predictable formula to keep them fresh every time.

That said, not every moment in court is without its rubs and the cross-examinations in particular proved to be a bottleneck to my enjoyment in these sections. All too often I found myself in an endless loop of dialing through the same testimonies over and over, completely at a loss for how to proceed, before realising I had to intentionally trigger a statement I’d already heard in full to get a different result. Key discoveries also seemed to come to me long before they did Ryunosuke, leading me to be punished for trying to present things that made far more sense than the roundabout way in which the characters in-game would get to them. Still, there’s fairly generous room for error with a multiple-strike system and frequent autosaving so mistakes, even annoying ones, aren’t a death sentence.

On top of the two core games that make up The Great Ace Attorney Chronicles, a smattering of extras rounds out the package and adds even more value for hungry fans. On top of accolades (that tie into trophies on the PS4), extra costumes for the second game and various galleries are a series of short, ten-minute stories called Escapades that fill minor gaps in the core narrative. They’re largely silly, and completely passive, so definitely not essential but still worth the time as an added bonus.

Throughout everything that this double feature has to offer, there’s no denying it looks an absolute treat. Character models and environmental assets don’t appear terribly different from the mobile versions, but (at least on PlayStation) the art truly benefits from being viewed with greater clarity and fluidity. The energetic and detailed character animations against gorgeous pseudo-3D backdrops lends everything an incredibly striking look. A lack of voice acting (which isn’t surprising given the immense volume of dialogue) means that you’ll spend a lot of time hearing the gentle beeps and boops of text rolling out, but there’s an otherwise great use of incidental sound effects and a rousing score. Though there are the odd few potholes in the road to victory in any of The Great Ace Attorney Chronicles’ ten episodes, there’s nothing more satisfying than the increasingly-frenzied pace of dialogue and swelling of fanfare when the tides of a hearing begin to turn in your favour. It’s exhilarating stuff.

For me, The Great Ace Attorney Chronicles proved to be a very solid entry point to a series that’s always piqued my interest, so the $60 cost of entry for two lengthy games in one collection is a pretty compelling offer for anyone in a similar situation. It’s definitely going to please existing fans too, giving everyone a chance to finally play these two entries as well as offering them a goodie bag of extra content for their troubles. I do hope that future entries find a way to streamline or shake up some aspects of the courtroom gameplay, but Capcom can certainly count on one more fan to line up for whatever comes next. 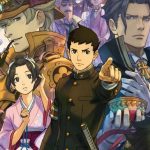 The Great Ace Attorney Chronicles Review
Few Objections Here
The Great Ace Attorney Chronicles' one-two punch of newly-translated ports is a fantastic package for both newcomers and long time fans, even if it falls prey to longstanding pitfalls. A compelling narrative stacked with an eclectic cast and top-notch writing drives a satisfying, if simple, gameplay loop that's like little else in the genre.
The Good
Brilliant writing and characters
Courtroom drama is utterly compelling
Visuals hold up beautifully on console and PC
Great value package with two games and new extras
Herlock Sholmes
The Bad
Trial-and-error witness examinations can be painful
Sheer volume of text might put some off
First game takes a while to pick up steam
8
Get Around It

The Great Ace Attorney Chronicles Review
Few Objections Here
The Great Ace Attorney Chronicles' one-two punch of newly-translated ports is a fantastic package for both newcomers and long time fans, even if it falls prey to longstanding pitfalls. A compelling narrative stacked with an eclectic cast and top-notch writing drives a satisfying, if simple, gameplay loop that's like little else in the genre.
The Good
Brilliant writing and characters
Courtroom drama is utterly compelling
Visuals hold up beautifully on console and PC
Great value package with two games and new extras
Herlock Sholmes
The Bad
Trial-and-error witness examinations can be painful
Sheer volume of text might put some off
First game takes a while to pick up steam
8
Get Around It
In this article:ace attorney, Capcom, kieron verbrugge, pc, ps4, review, switch, The Great Ace Attorney Chronicles, wellplayed