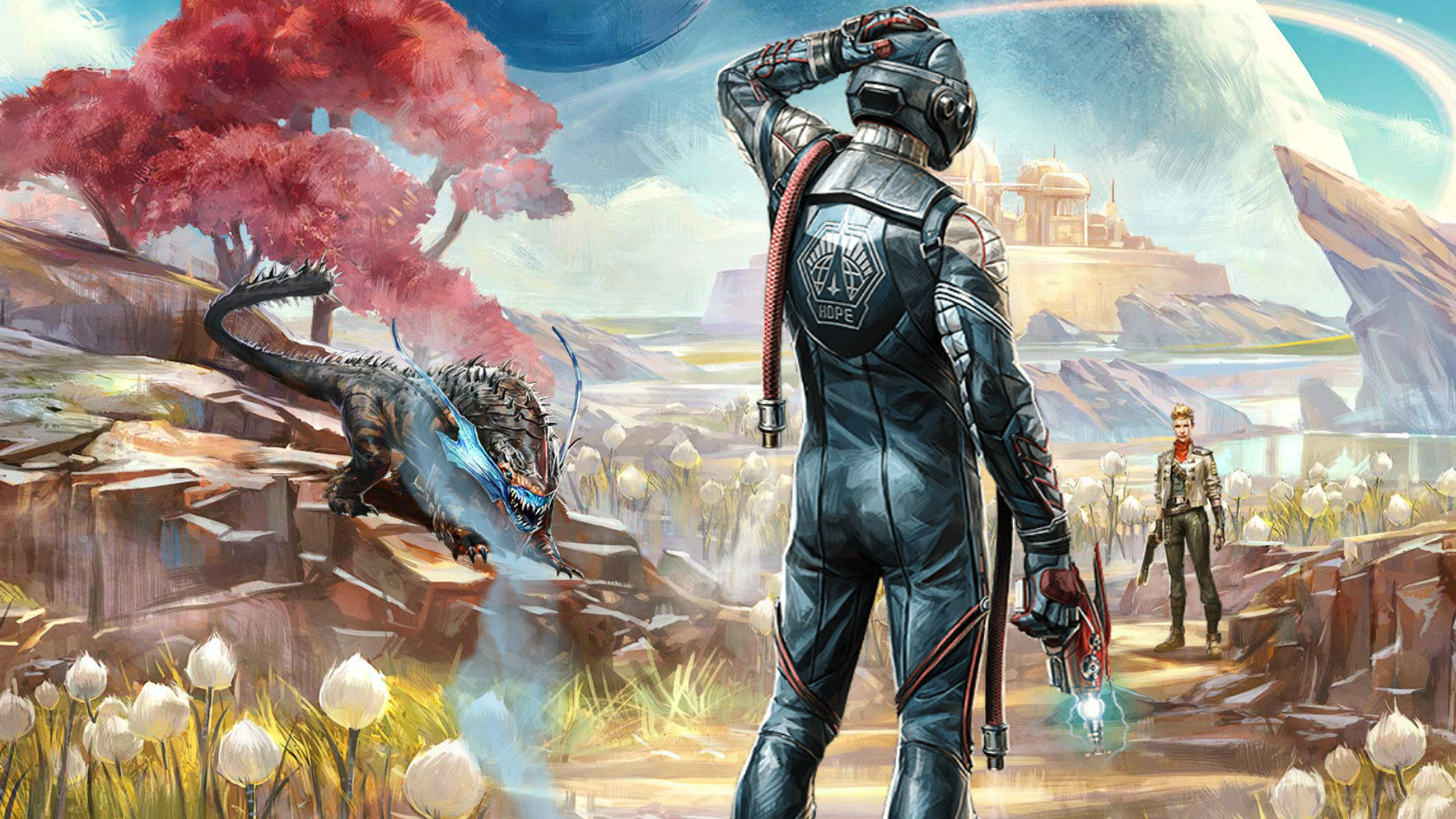 If there is one thing I hate, it’s boring open worlds that are laden with bugs, average writing and are just big for the sake of being big. While I still admittedly sink my time into games like that because I’m an idiot, it’s a level of cheap design that always frustrates me, and it is why I have always found solace in Obsidian Entertainment’s games. While not perfect, they demonstrably show what makes worlds interesting. Whether it be enthralling stories, interesting and quirky characters or their intricately designed worlds, Obisidian’s games act as almost a safe haven compared to the industry standards. The Outer Worlds looked to be an answer to the lack of a really good Fallout-like experience this generation. The developer is known for making the best Fallout game since Bethesda took over the IP from Interplay, Fallout: New Vegas, and made the brilliant decision to bring back some of the original creators of the Fallout IP for The Outer Worlds. Thankfully, while it may not be perfect, The Outer Worlds is a cut above the rest in its genre.

Set in an alternate future, The Outer Worlds takes place in a region of space called the Halcyon Colony, a small cluster of planets settled by humans and run by The Board, a bunch of corporate executives in suits making out-of-touch decisions for the people they govern (not far from the current Australian government, to be fair). Your character is a slumbering colonist aboard a dormant ship named ‘The Hope’, a vessel filled to the brim with the best and brightest that Earth has to offer in the hopes of alleviating the issues plaguing the Halcyon colony. The Board were the ones responsible for the problems facing the Halcyon colony and made the decision to keep the colonists aboard The Hope to keep up appearances. At its core, The Outer Worlds has a very anti-capitalist message, outlining the underlying faults of the Halcyon Colony’s class structure and it never strays from that core ideal.

The Outer Worlds’ strength with its writing has to do with its characters. It’s a well-known fact that the life of game worlds like these comes in the form of their inhabitants – the NPCs, the hostiles and the wildlife. Artists and writers do an incredible amount of work to create vivid, bright cultures and communities that create unique and distinct atmospheres. Two standout places are the towns of Byzantium and Amber Heights, both having cultures and atmospheres that are the polar opposite of one another but equally captivating. These unique atmospheres make it easier to remember where key features of the world are, whether it be specific shops or even parts of different towns. The incredibly high standard and quality of writing that is upheld in The Outer Worlds is really on a whole other level – there aren’t really any games of this kind that put forth such quality.

While in sheer appearances the game may seem similar to the Fallout games, in terms of gameplay it is anything but. In reality, the game feels more akin to something like Borderlands (except with good shooting), even down to the animation style. It all feels familiar enough to help players grow accustomed to the new worlds that they will find themselves in during their time with The Outer Worlds. This is about where the similarities with Gearbox’s looter shooter ends, however. Mechanically, The Outer Worlds doesn’t really innovate but it brings familiar ideas up to speed with modern improvements. Things like a weapon durability system which is fairly non-intrusive and easy to work around, simple healing mechanics and a reinvention of the familiar VATS system in the form of Tactical Time Dilation (TTD for short). TTD really stands above anything else that we have seen before. Rather than target limbs through a clunky UI and rely on RNG, TTD offers a way for players to aim for specific limbs themselves and inflict various ailments on opponents such as blinding or crippling. There is a lot of freedom afforded to the player via TTD. Adding to this, different styles of weapons can inflict different ailments to enemies and you can even modify and upgrade weapons to have them grow in power as you do, though the latter increases in price exponentially. The weapon and damage systems are deep enough to feel rewarding but not so deep as to feel obtuse (a line which many RPGs tend to cross on the wrong side of).

In terms of RPG mechanics, The Outer Worlds really hits the nail on the head. While it features a traditional levelling system, The Outer Worlds does an excellent job at introducing the player to the various stats that the player can invest in before. Where Fallout has S.P.E.C.I.A.L, The Outer Worlds has a small selection of character traits which govern three stats each. Once you have invested in the traits enough you are then given the ability to invest in specific stats. This is how you design RPG mechanics like this. It’s accessible and well designed, and the designers at Obsidian should be proud of their efforts. To further add to this is the benefit of companions. Companions in RPGs can often be more trouble than their worth, and at best are sometimes glorified packhorses, but Outer Worlds features companions that offer a variety of benefits and are worth having around. These include buffs to player stats and unique attacks and commands that you can coordinate and use while fighting the hostile inhabitants of the Halcyon Colony.

One of the parts that surprised me the most with The Outer Worlds was just how polished it is. Most people would be aware of the running gag that Bethesda bugs are considered ‘features’, but in The Outer Worlds, Obsidian’s bugs are actually bugs you are supposed to kill. In my time playing through the game I didn’t actually encounter any bugs or glitches, and not only is this a change from Obisidian’s standard but it is also a change from the standard that is set for large-scale open-world games of this ilk. In addition to this, the game actually ran pretty smoothly. While not the best performing game I have played on my PC, compared to the usual levels of performance you can expect from a game of its type it is fairly well optimised. Naturally, some areas that feature a lot more of the costly visual techniques like an abundance of shadows and volumetric lighting/fog and particle effects run at a lower framerate than areas with less of these techniques, but when you factor in all the detail the game is trying to push it makes sense. Like virtually every game on the Unreal Engine platform, the law of diminishing returns applies to the visuals and performance – the higher quality visuals you go for end up making less and less of a visual difference but at more and more of a performance penalty. A personal favourite technical feature of mine is the impressive Depth of Field that has been implemented in this game, something which they really show off when you are talking with NPCs.

In saying that, the higher end of the visual scale makes little difference, the art itself for The Outer Worlds is superb. The art style is something that resembles a mix of Fallout and No Man’s Sky for the general landscapes, with hints of Bioshock when it comes to the buildings and infrastructure. Even simple things like the bright, neon colours that are emitted when using energy weapons just make everything feel so distinct in a genre that can become quite saturated with similar art styles. It’s nice to play a game where the world doesn’t feel so bleak, but the game has its own duplicitous tone – the bright colours invite you in and the inhabitants try to kick you out.

My only real issues with the game have to do with its reliance on waypoints and markers, and its bizarre Ultrawide support on PC. The Outer Worlds unfortunately feels the need to excessively point out the world to its players, and while there is nothing inherently wrong with this, it does come at the cost of the design in some areas. Some quests are excellently designed and make good use of descriptive dialogue and text to point the player in the right direction, but at the same time other quests just don’t make use of these techniques and rather rely on the game to just point the objectives out through a waypoint – something which comes across poorly if you decide to not use these UI elements. As for the Ultrawide support, there isn’t much to say outside of cutscenes and speaking with NPCs isn’t in Ultrawide while the rest of the game is (though some cutscenes are stretched to fit the screen which looks awful). It’s a weird choice, especially for the latter.

The Outer Worlds is… well… out of this world. The environments it puts forth, the political ideals that are so brilliantly interwoven into the world and its characters, the RPG mechanics, the art style – it’s all so incredibly well done that it sets a new standard for the open-world RPG genre. The game had quite a bit to live up to with it being a spiritual successor to the classic Fallout: New Vegas, and it does so with flying colours. What’s even more impressive is how few mistakes are made with such an ambitious title. This is a game I can happily recommend. 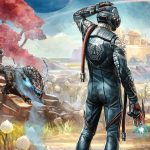 The Outer Worlds Review
Beat The Bootlickers
The Outer Worlds consistently raises the bar for what an RPG of its kind should be like
The Good
Great writing
Good performance
Distinct and refreshing writing art style
Well-designed RPG mechanics
The Bad
Game can rely on waypoints too much in some areas
Bizarre Ultrawide support
9
Bloody Ripper
In this article:obsidian entertainment, pc, PlayStation 4, private division, review, the outer worlds, Xbox One