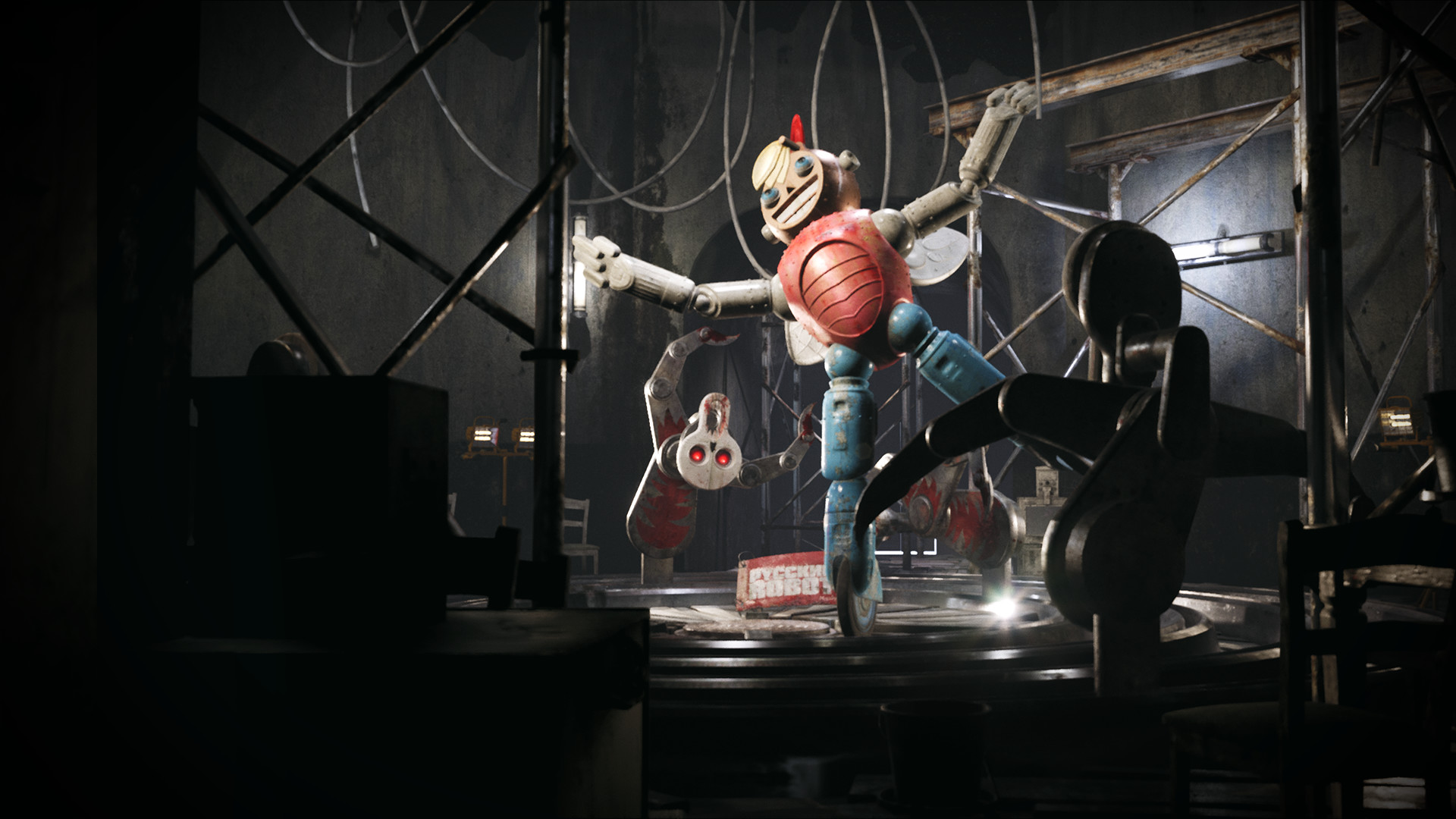 The Soviet Union collapsed nearly three decades ago, yet its legacy remains with us today. Communism remains a system of government employed by nations – one of which is a potential superpower. Soviet-made weapons like the AK-47 assault rifle and the T-34 medium tank remain in use throughout the world for their low cost and relative reliability. One of the most iconic video games ever made, Tetris, was designed by a Soviet computer engineer in 1984.

Atomic Heart, however, seeks to tap into the Communist Bloc’s history with robots, secret bases, and goddamn zombies, by way of beating them to death with improvised instruments. The game’s become one of my more anticipated titles simply because of this commitment to Socialist secrecy, but did you know that some of its more bizarre features are based on partial fact? So break out that Pepsi you bought with diesel submarines, and get ready to ‘learn’ the (real) history behind the (fictional) Facility no. 3826.

Atomic Heart takes part during the ‘high noon’ of an alternate-history Soviet Union, in the top-secret Facility no. 3826 – a laboratory of horrors run by the yet-to-be-revealed Dr. Stockhausen. You play as a special agent, sent to the facility to find out why it’s gone dark. Atomic Heart is like a mix between Bioshock and S.T.A.L.K.E.R, promising tight close-quarters combat and trippy visuals. If you haven’t seen the trailer yet, you can check it out at the bottom of the article. Alternatively, click here. Details of the game remain unknown, but the variety of environments shown off implies that we’ll get to go on a rollicking adventure through scientific Hell-houses and robot paradises.

Elaborate research facilities are nothing new, but the Soviets went one step beyond. Entire cities were built purely for research purposes throughout the 20th century, mostly for nuclear technology and military bases. There were two ‘classes’ of these shut-off parts of the world: One was for cities you couldn’t get in or out of. The second was for cities you really couldn’t get in or out of. Conditions in these cities varied; in Arzamas-16 (now Sarov), residents enjoyed higher wages and constant supplies of goods even as the USSR’s economy crumbled in the late 1980s.

Chelyabinsk-40 (later 65) became one of the most contaminated places on Earth, and is the birthplace of the third-largest nuclear accident of all time. You win some, you lose some. Even after the Soviet Union packed in it in 1991, these cities remained tightly controlled. Around 41 of them remain populated today, now with the official term ‘Naukograd’ [science city]. Some, however, were abandoned. For example, Skrunda-1 in Latvia remains as empty as Soviet TV programming.

Soviet architechture is something else. Throughout the 20th century, architects built some pretty weird-looking stuff – and that’s just its domestic buildings. Atomic Heart’s sister title, Soviet Lunapark VR, is set in the same universe and provides prominent clues to the purpose of 3826. One of these is the ‘showroom’ intended to show off the facility’s wares. The Soviets were no stranger to showing off their stuff, taking (almost) every opportunity to appear at World Fairs.

Buildings of this calibre can be seen a couple of times throughout the trailer, hinting that Atomic Heart could be set at a military or scientific pavilion. This wouldn’t be far-fetched. Places like the VDNKh exist as permanent showrooms for Soviet science – and current homes for older wonders.

Alternatively, a macabre amusement park could be on the cards. They weren’t an uncommon feature of life in the Communist world, but fun times weren’t limited to Wet ‘n’ Wild: Red Version. Boss-looking circuses were also popular. Ironically, the most popular example of a Soviet theme park is the abandoned one in Pripyat. Yes, that Pripyat. Regardless, we’ll simply have to wait for more information about Atomic Heart to see how full of ‘бред сивой кобылы’ I am.

You’re wondering who I am, machine or mannequin

Robots frequently appear in Atomic Heart’s trailer and promotional material, which is great; if there’s anything I love more than skeletons, it’s robots! Coincidentally, the Soviets loved them too! During the Winter War of 1939, remote-controlled ‘teletanks’ were used by those crafty commies. Use of robotics in industry and (potentially) agriculture was staggering, with the Soviets using more than 76 thousand in 1980!

The Space Race led to a cultural fascination with space travel that spanned the world, and the Bolsheviks were no exception. This fascination with the stars pre-dates even the Russian Revolution: Pre-science fiction works about the vast reaches of space were popular in Imperial Russia.

Space travel was everywhere in the USSR, like Pokemon in the 90s, going so far as to become the “unofficial religion” of the Union. Naturally, this ended up making Soviet children want a robot friend – and writers want to exploit them. In an interview with developer Mindfish’s CEO Robert Bagratuni, it’s made clear that Atomic Heart was mostly inspired by these Soviet sci-fi authors like the Strugatsky brothers and Stanisaw Lem.

Robots featured heavily in Soviet science fiction, with film being particularly guilty of robophilia. An early example is the 1935 film Loss of Sensation depicting robots destroying Capitalism by removing labour costs. A mere idea back then, but a major debate today. Russian animation, too, didn’t shy away from a social dilemma: The 1977 short film Polygon depicts a robot tank given too much power, and 1987’s There Will Come Soft Rains shows obedient robots living in denial that their masters are now nuclear ash.

Back in the real world, children in the ‘Young Pioneers’ (the Soviet equivalent of the Scouts) and other state-sponsored youth organisations were encouraged to build their own robots. Robots were slapped onto the moon by the Soviet space program, and were (briefly) used in cleanup efforts at Chernobyl…until they stopped working and human labour had to be used instead. At least they got good(ish) footage of the most radioactive object on the planet before they got living people in to clean up Chernobyl. Brutal.

(Un)fortunately, Soviet robotics used to ‘kill some humans’ was a relatively untapped market. Unmanned aircraft were perpetually being refined after the 1950s, with the Tupolev series being the most well-known, but these were merely for reconnaissance. Aside from these and the previously mentioned ‘teletanks’, robots never quite became a priority for the Red Army outside of science-fiction.

Atomic Heart, on the other hand, has no such restrictions. Borrowing design philosophies from both real and fake robots makes for some interesting encounters, which we’ll get to see in the finished game!

Creatures crawl in search of blood

[Here’s where history gets graphic. If you’re squeamish or easily distressed, you may want to skip this section. No images or video is shown in this article from here on in]

Atomic Heart doesn’t just have you facing off against robots of all shoes and sizes. The secrets hidden in 3826’s hallowed halls are the cream-of-the-crop when it comes to using humans as lab rate. Because this is a video game, zombies are another of 3826’s catalogue of carnage. Now, this is probably where your suspension of disbelief (understandably) began to fade away. “Pff, zombies”, you snorted. “Robots and secret facilities I can see being real, but zombies? Gimmie a break!” In most cases, yes, zombies can be written off as mere fantasy.

But we’re not dealing with just any reality here; we’re dealing with a reality with a Communist nation that tried to drill through the Earth’s crust because “the Americans were doing it, we just wanted to be popular”. Buckle up, buckaroo, because you’re in for a ride.

The Soviets have a long and ‘proud’ history of f***ed-up experiments outside of creepypasta, beginning from as early as 1921. The Soviet wartime secret police (NKVD) took over previously-established Bolshevik institutions following the acquisition of Japanese chemical technology and human experimentation results at the end of the Second World War.

These new toys were promptly improved through human testing on political prisoners, with the end-goal of finding a toxic chemical that was undetectable in any way. Most sources pin these efforts as “scarily successful”. State-sponsored attempts to create a human-chimp hybrid through cross-insemination in the 1920s were unsuccessful.

“But Aza, what does this have to do with zombies?”

You like dogs, right? I’m so sorry. Here’s a scientific film from 1940 where Soviet scientists kill several dogs and bring them back to life. Although, the legitimacy of this film has been hotly debated for decades. The film, and contemporary scientists, said that the dogs were alive for hours of excruciating. Others from the time insist that the dogs were only kept alive for minutes of excruciating pain. Hey, that’s an improvement!

Vladimir Demikhov successfully created two-headed canines multiple times. When you combine this with the unfortunate story of Laika, you get the sense that the Soviet Union was full of cat people. Mind control was also on the cards for the Eastern Bloc, not unlike the American ‘MKUltra’ program (which you probably know from the Polybius myth).

Atomic Heart looks like it won’t pull any punches with anything from its killer robots to its gruesome science. I can’t even to begin wrapping my head around what all that suspended water/blood in the trailer was all about. We’ve seen gruesome things go down in said trailer, and screenshots/trailers from Soviet Lunapark tease even more nightmare fuel. But amongst all this is a fantastic first-person action game that I can’t wait to get my hands on. While we don’t have a set release date just yet, I bet it’s on any publisher’s wishlist for E3. It’s too damn good-looking not to be!

Frank Swain – How to Make a Zombie: The Real Life (and Death) Science of Reanimation and Mind Control (2013)

Loren Graham – Science in Russia and the Soviet Union: A Short History (1993)