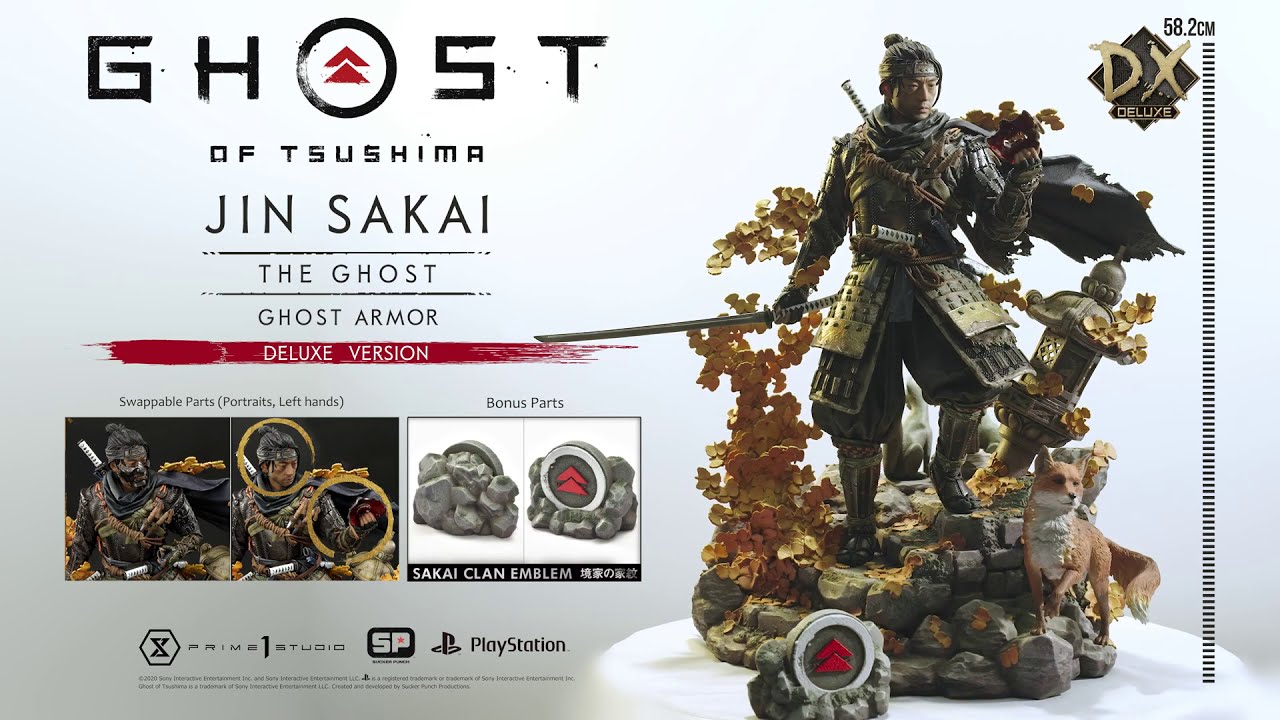 As if gaming wasn’t expensive enough, companies go ahead and create outstandingly tempting collectables that are based on games that we love. I’m not talking about your typical Ubisoft collector’s edition statue, I mean the high-end premium statues and figures that threaten to break your bank. I’m not saying that the CE goodies aren’t cool, but there are bigger fish to fry.

With that in mind, a duo jaw-droppingly beautiful Ghost of Tsushima statues has just been announced that depicts protagonist Jin Sakai. These 1/4 scale monsters are a towering 58 centimetres tall, so you’ll need some serious free space to accommodate these big boys. The standard version has Jin standing next to an Inari shrine in the Ghost Armour (with the Executioner’s Penance dye), with Ginko leaves falling around him.

Flanked by a golden bird and helpful fox, this statue really manages to capture the alluring beauty of the source material. The deluxe version comes also comes with an interchangeable unmasked head as well as an interchangeable arm, holding said mask. This lets you change the statue’s feel entirely, making it far more moody and foreboding.

These incredible pieces are coming to us from Prime 1 Studios, a company that’s been producing amazing collectables for a good long while now, so you know that the quality is there. Both the standard and deluxe versions are available for order over on Popcultcha and are scheduled to release in July 2022.

Now clearly I’m obsessed with these statues, so what haven’t I ordered one of each I hear you say? Well, it might have something to do with the standard versions being priced at AU$1799.99 and the deluxe coming in at $1999.99. That price tag really is eye-wateringly steep, or maybe those are just my tears because I realised that I can’t afford one, I’m not sure, but I do know that I want them so damn badly.

If you start paying it off now you can have it ready to give to me for my 26th birthday in the year 2022, thanks in advance generous reader.

What’s the most you’ve spent on a gaming collectable? Will you consider buying this Jin Sakai statue? Let us know.