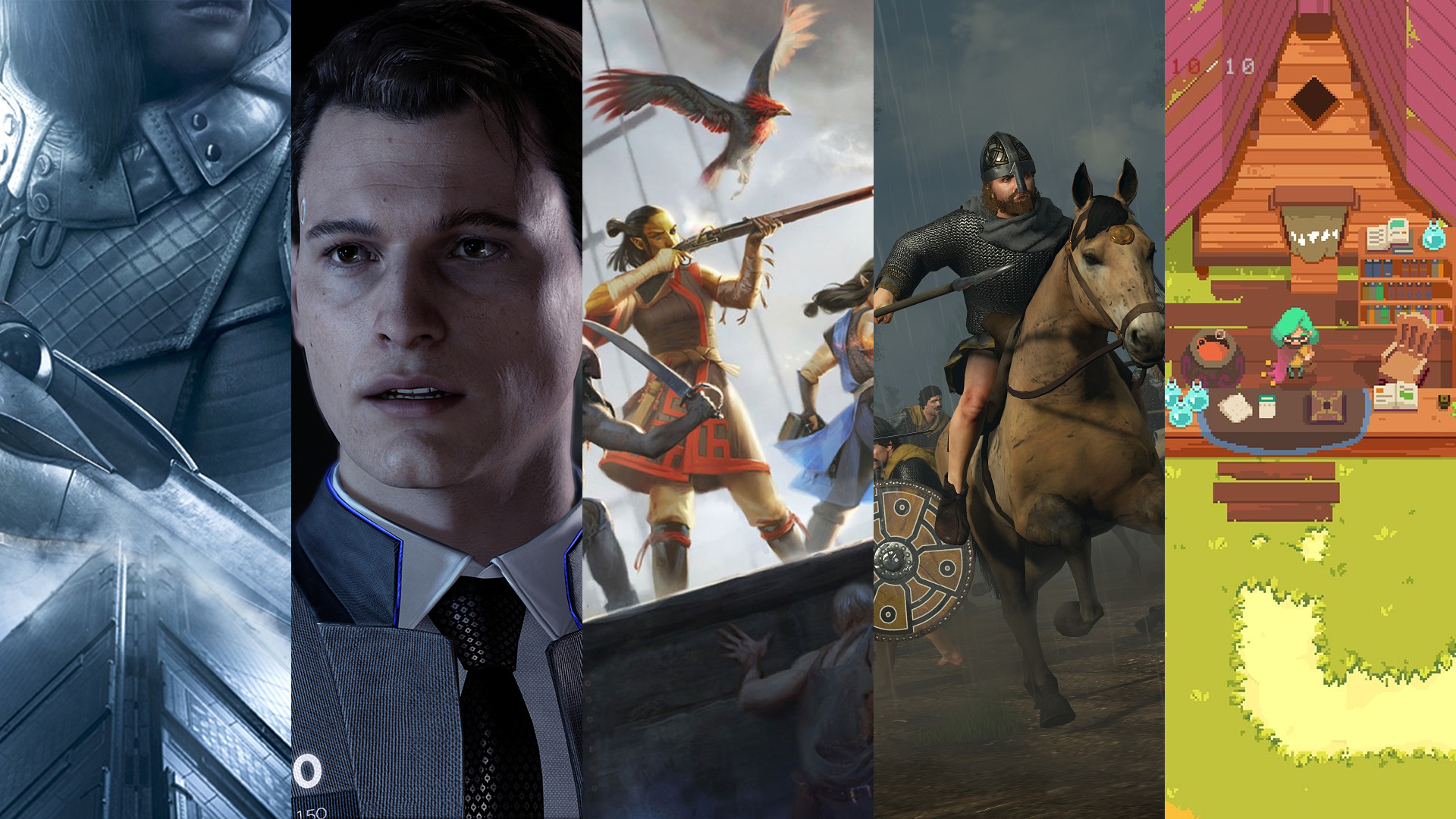 May seems to be cowering in fear after Kratos tore through April, with the milder month content to eke out a few Definitive Editions and remasters and not too much else. Sneaking in there is a rare Microsoft exclusive in the form of State of Decay 2 that will hopefully lift the company’s flagging reputation in the exclusive department, as well as Detroit: Become Human, which if popular media is to be believed was made by a team of slaves chained to desks and forced to wear gimp masks. Quality guaranteed.

Technically, this time of year does spell the end of jorts weather, as the cold creeps in and the hot game releases start to taper out. What a send off April was, though! I’m very glad that May is starting out soft for me ‘cause I’m still playing the incredible God of War and tinkering with Labo. Maybe I’ll build myself some sturdy cardboard jorts in anticipation of the later weeks, which are decidedly more stacked.

On the AAA front, it’s hard to ignore the coming of Detroit: Become Human, whether out of interest in the game itself or thanks to the continuing controversy surrounding David Cage and Quantic Dream studios. All signs point to this being the team’s strongest attempt at their brand of interactive storytelling, though.

The last part of the month is packed with some pretty enticing indie content, too. Pixeljunk Monsters makes a surprising (and welcome) return with a fully fledged sequel, which I’m very excited for. Runner3 is doing the same. Moonlighter has me the tightest in my ever-fashionable jean shorts though, with its mix of artsy, top-down action RPG and shopkeeping simulation.

Rounding out May is a nice little surprise in the form of Sega Mega Drive Classics, a collection of games that I have no doubt bought many times before and will continue buying over and over, because reliving the happy parts of my childhood is better than facing the real world today. Um, sexual innuendo something jorts penis joke, the end.

It’s been a while since I’ve slipped on my jorts but with the line up in May, it looks like I might just burst straight back out of them again!

Much like that late night kebab after a solid drinking session (i.e. all signs point to the fact that it’s a bad idea), I’ll no doubt be blowing the dust off my guardian to check out the latest expansion in Destiny 2: Warmind when it drops in early in the month. Sadly I think it’s going to be too little too late for the franchise, but maybe we’ll get another Taken King style renaissance come September, though I’m not gonna hold my breath.

Next up is Conan: Exiles because I just can’t get enough gathering/crafting survival games. Despite the fact that they removed a very important slider in the character customisation, it looks like there are a lot of new elements that’ll set Exiles apart from other titles in the genre.

If you haven’t heard of FAR: Lone Sails, do yourself a favour and look it up. It’s a great looking 2D side-scrolling adventure/exploration game where you traverse an unforgiving greyscale world in a bright red land ship. As you search for a long lost civilisation, you’ll need to solve environmental puzzles and overcome obstacles while you operate and maintain your moving castle. Looks like a bunch of melancholy, lonely fun.

As I mentioned above, I’m heavy into crafting and survival games and State of Decay 2 has been on my radar since I played the crap out of the first one a few years ago. I love the finite open world survival, I love the community building and I‘m keen to check out the newly included cooperative zombie slaying. Here’s hoping it’ll make up for the lacklustre Sea of Thieves.

May, May, May. It’ll be hard to follow up on April seeing as April housed what is currently my game of the year in the form of God of War, but it looks like May won’t be without some tantalising releases. First up on May 8 is Pillars of Eternity II: Deadfire. I never really played much of the first Pillars game, but what I did play was pretty good and what I’ve heard about the rest of it sounds awesome. I’m keen to see what Obsidian Entertainment have to offer with this game. Unfortunately console players will have to wait until Q4 2018, but either way the game looks pretty good! Next up, on the same day, is Destiny 2: Warmind. Now I’ll admit I’m keen for this for all the wrong reasons. Bungie seem to be making mistake after mistake with Destiny 2, providing only band-aid fixes for core issues and I’m curious to see how bad they can make the Warmind DLC. Curse of Osiris had to be the single worst content expansion I have ever played in any game. The story was poorly written, there was heaps of content recycling (even for Bungie) and it even locked vanilla content behind a paywall. It really seems like Destiny 2’s life is going to be the same as the original’s.

On the 18th there is Hyrule Warriors: Definitive Edition. There’s not much to say, really. It’s Zelda characters in a warriors game on the Switch. Following this is State of Decay 2. I enjoyed the first State of Decay game. I wouldn’t exactly call it great, but it was enjoyable and the fact that the sequel has co-op has me even more interested. Finally, we have the big one (for me). Dark Souls: Remastered. I’m normally against remasters, but the game’s assets are being brought into the Dark Souls 3 engine which means that it won’t be as much of a technical pile of junk. Not to mention I’ll be able to play the game at a buttery smooth 60fps on console. Very keen to get my hands on it!

Another title I’ll be picking up in its Definitive Edition form is IO Interactive’s Hitman. After playing the Sapienza episode when it went free in March I was hooked, so I can’t wait to be able to invest more time in it this month. That’s enough of the Definitive Edition talk for now. Detroit Become Human is undoubtedly my most anticipated game of the month, and despite the rumours that have run rampant about the work conditions at Quantic Dream, the game still has me extremely interested. Beyond: Two Souls left a sour taste in my mouth, so I’m hopeful that Detroit is the studio’s return to form. Rounding out my list is Moonlighter, an indie pixel art action RPG. Indie games with pixel art are my weakness, and Moonlighter is exactly that, with the inspiration of the top down Zelda titles evident also, which if you know me at all means that I’m absolutely enamoured by it. May is packed with brilliant games, and I’m sure to be satiated throughout the month.

It’s gonna be May! A strong month can be expected for more focused games right from the get go, with Total War Saga: Thrones of Britannia and City of Brass coming out shoulder-to-shoulder. The former is something I’m keeping an eye on, as it promises a smaller scope without the pricetag of a full release. Think Napoleon: Total War except it’ll actually work properly…I hope. City of Brass is an Australian release, which fills me with patriotic joy! Arabian mythology is often forgotten in terms of video games and the first-person Castlevania experience should be an interesting one indeed. But really, I’m just there for the whip! Whip it good!

Steins;Gate 0 is the sequel to the best visual novel of all time. The anime of the 2009 classic is considered one of the best ever made. The PC gets its translated version this month – nearly two years after the game’s release. This game is apparently very good. I mean, why wouldn’t it be? It’s only a sequel to the best fucking Japanese time travel fiction ever. Speaking of anime (a few seconds ago), Little Witch Academia: Chamber of Time also arrives this month. Beginning life as the most charming OVAs I’ve ever seen, last year’s TV anime was likewise a cute series for cute people. Side-scrolling action is a simple genre, fitting the slice-of-life nature of the series. Studio Trigger, the people behind the anime, are animating the cutscenes so you know you’re in for some comfy fun.

And finally, the big boy. The Dark Souls of remasters hits our screens this month. I’m mostly curious to see if it’ll work well on my Switch. I’m also in my meme bunker waiting for the revival of one of the stalest memes of the decade. It’s dark in here.