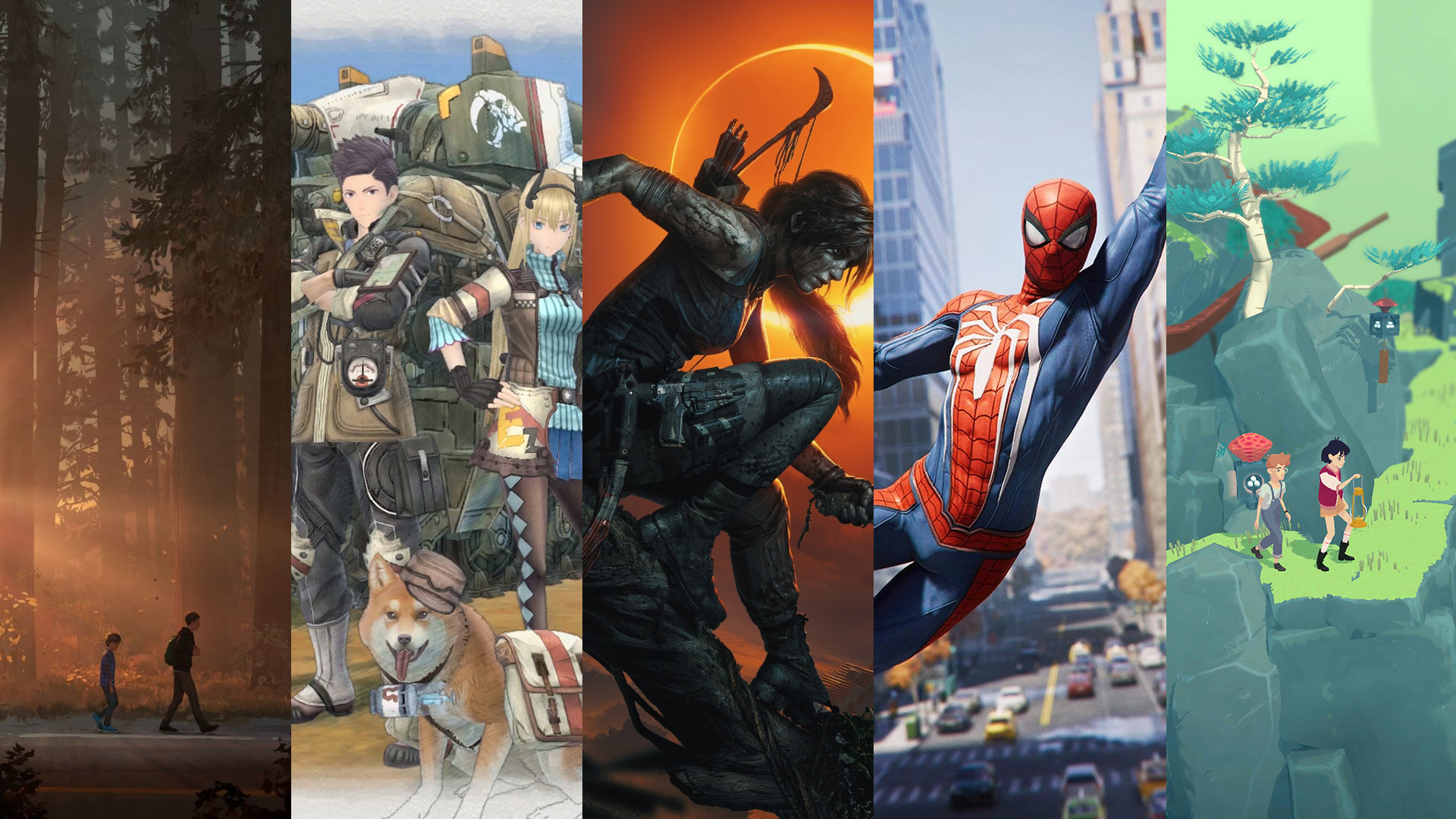 September 20 – The Garden Between (PS4/Switch/PC/Mac)

A couple of AAA heavy hitters are bound to make a decent grab at the hard-earned this month. Marvel’s Spider-Man on the PS4 in particular has a few people crawling up the walls in anticipation, not realising the fact that they are not in fact the titular superhero perhaps. I just hope the developers don’t move any more puddles, my heart can only take so much.

Boy oh boy, September is looking like a damn treat. Kicking off my busy month will Dragon Quest XI: Echoes of an Elusive Age, an RPG I’ve been intrigued by since dipping my toes in the Dragon Quest series earlier this year with Dragon Quest Builders. I’m not really a huge fan of superheroes and all that MCU and DCEU stuff, but that doesn’t stop my mouth watering at the proposition of Marvel’s Spider-Man. Peter Parker has always been my boy and I can’t wait to see what Insomniac Games can do with Spider-Man. Indie gem Undertale hits the Nintendo Switch which is extremely exciting. The more people getting to experience the story of Undertale the better in my eyes (I’ll obviously be double dipping). Speaking of Indie gems, The Gardens Between looks like it may just become one of them, with it’s beautiful artstyle and fascinating worlds sure to have me captivated when it get my eager hands on it. The Voxel Agents, the development team behind The Gardens Between are also an Australian studio, so I can’t wait to support them.

Valkyria Chronicles 4 releases towards the end of the month, and I’m having a tough time containing my excitement. The original Valkyria Chronicles is one of the greatest games I’ve ever played, so I’m just hoping that Valkyria Chronicles 4 can offer me an experience comparable to the brilliant original, after the disappointment of the spin-off title Valkyria Revolution. Rounding out this crazy month is Life is Strange 2: Episode 1,  which has been one of my most anticipated games since its announcement in May 2017. I’m devastated that we aren’t going back to Arcadia Bay, or spending time with Max or Chloe, but I have faith in Dontnod Entertainment to create a new cast of characters that everyone will love as much as the original bunch. The Awesome Adventures of Captain Spirit instilled me with plenty of faith, now we just have to wait and see if Dontnod deliver.

September is always a chillax month for yours truly. I just got back from a medieval carnivale and boy, is my sword tired! My melee fix is satisfied, so now I must return to what truly moves me: killing people from very far away. What a good coincidence, then, that Valkyria Chronicles 4 hits the scene this month! Everything about the series gets my jorts considerably tight; the dieselpunk aesthetic, the turn-based ranged combat, and the opera-style drama are all my jam by themselves. Get them together, and it’s a triple jam!

But there are better things than guns and petroleum, and they’re right under your very nose: cute girls! Yes, any man (or woman if that way inclined) will tell you just how great cutie patooties are! This month, SNK are going one step beyond by releasing SNK HEROINES: Tag Team Frenzy – a game populated entirely by the developer’s best waifubait. Not only is it looking to be a solid fighting game, but it also has everything we pathetic weeb loners could ask for. Character customisation, fan service costumes, a wafer-thin excuse to get all these ladies together, a photoshoot mode, the works!

Speaking of pathetic loners, indie juggernaut Undertale launches on the Switch this month. Despite a community born from the dredges of that dreaded beast Homestuck, it quickly became my favourite game of 2015. Its inspirations and characters are what carried the game to stardom. The Switch version lets me replay the game on a comfier device, helping me discover once and for all if it was ever actually a good game! Only time will tell.

Finally, Zone of the Enders is the other franchise from legendary developer/enigma Hideo Kojima. They’re incredibly good mecha games that are well worth your time, and a remaster of the second game is coming this month. Zone of the Enders: The 2nd Runner – Mars. The remaster will include 4K support and a VR mode, as well as revamped cutscenes that don’t go for 45 minutes! I’ll never forget MGS4. Never.

I have no idea how I’m going to get anything done this month. In just the first seven days of September we get two huge games in the form of Dragon Quest XI and Insomniac/Marvel’s Spider-Man. That’s week one, people. Fast forward another week and it’s the third game in the fantastic rebooted Tomb Raider trilogy, Shadow of the Tomb Raider. I’ve played all of these releases in some capacity before, so I am very certain that I’ll be getting all three of them. And this is still only halfway into the month.

The second half of September is a tad lighter in AAA fare, but still chockers with cool shit. The Gardens Between is our Made In Australia feature game this month and looks bloody excellent, then Valkyria Chronicles 4 comes along to (hopefully) revitalise the series. And lastly but not least…ly, the first episode of Life is Strange 2 launches towards the end of the month. Know what? I’m kinda glad Spyro got pushed back now because damn September. More like, No-Sleeptember. Right? I’ll see myself out.

IT’S FINALLY SEPTEMBER! I can crawl back and lock myself in my bedroom all month and not feel guilty about it for one second. it has been a long awaited month for me with a lengthy gaming drought with no new releases tickling my fancy since May, so I’ve done a complete 180 and honestly feel like I have too much on my plate this month. I am honestly thankful that Spyro has been pushed back till November and fingers crossed they put all of the trilogy on the disc with the time they are given to perfect its production.

For me, it all starts with Marvel’s Spider-Man on September 7th, as a self-confessed PlayStation fan-girl I am usually fairly biased when it comes to AAA playstation exclusives and this will be no exception, Sony is getting all my money with a quick pre-order for JB Hi-Fi’s steelbook edition. I think we finally, after years of patient waiting have a Spider-Man game worth playing, because let’s be honest most of them have been completely rubbish. I trust Insomniac games will not leave me disappointed.

Lara Croft is my main girl and I am beyond relieved that Eidos have taken back the reins on the latest installment in the Tomb Raider reboot series with Shadow of the Tomb Raider alongside Crystal Dynamics. Eidos made Lara who she is so I have all the faith in the world that they will give this game what it needs to triumph over its predecessors. I must say I am not looking forward to the $300 dollars I forked out for the beefiest statue edition of the game coming out of my account mid-september, but it will all be worth it to hopefully see the final installation of this particular story done to perfection and watch Lara bloom into the badass, dual pistol-wielding, guns blazing adventurer she is destined to become.

Lastly I am extremely eager for the first episode of Life is Strange 2 from Dontnod Entertainment. I played the first episodic series with absolutely no expectations at all and came out of it clutching my heart, crying in disbelief and begging for more of this unique, intelligent and charming universe. I hope this one has me just as emotionally attached to new characters and I am ready for it to rip me apart all over again impatiently waiting for the next episodes. Fingers crossed I find the time for this action-packed month! Pray for me guys, I’m gonna need it