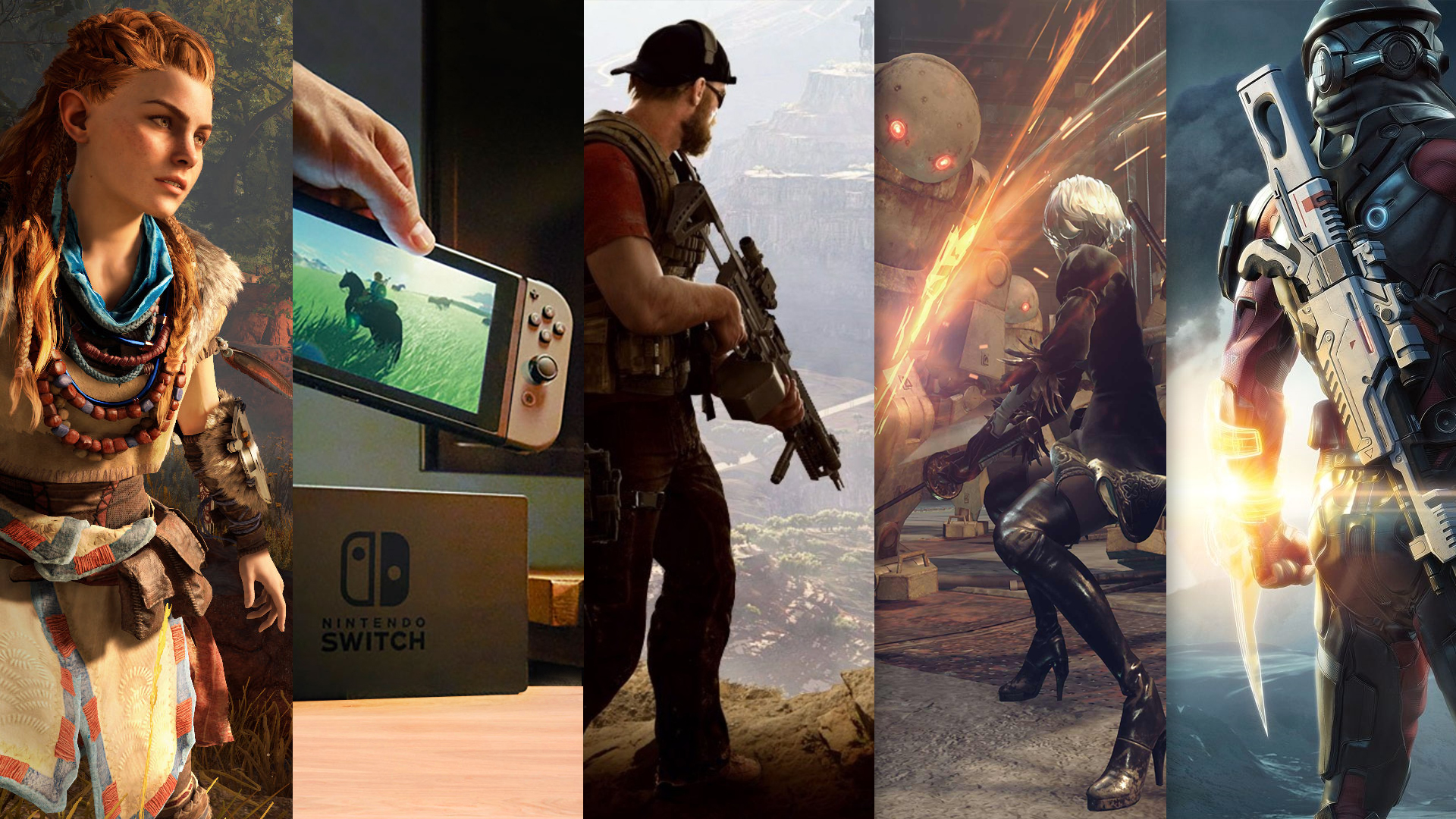 Ahh yes, March. A month of limited excitement in every way. We’ve had the hype of Christmas, NYE, Australia Day and the shortest month, which for some reason is better than months that are longer. March is the gooch of months. For most, it’s without excitement no matter how many times you poke it, and it’s wedged between the good stuff (unless of course, Easter is in March. In that case…well, it’s not terrible). If you are a gamer however, March could turn out to be quite exciting for you. For some of us, it gets the old jorts tight around the crotchal region. For others less well endowed, it makes them a little more taut. Whatever your fancy, this month there is a game/console to suit your desire. Let’s tell you what we’re keen for.

After a five-week break gallivanting around Europe in my newly-cultured jorts, I am eager to buy a bunch of games that I most likely won’t actually play and will just end up collecting dust amongst my already dusty Brobdingnagian backlog. However, there are a couple games that I intend to play (read: install and shelve) upon the transaction being complete. First is none other than the new PlayStation queen Aloy’s Horizon Zero Dawn. HZD has been getting rave reviews, even from our very own Xbox fanboy Kieran (read our review here) and genuinely looks like an open-world game that won’t get boring after a few hours. Plus I need another game to play with the missus so that ticks that box. Plus plus, robot dinosaurs. Secondly, I am keen for a new squad-based game, so Ghost Recon Wildlands will hopefully scratch that itch (plus (that word again) I am most likely doing the review). I played a couple hours of the open beta and my jorts were somewhat tightened at the potential it holds. Thirdly, I am excited for the release of Death Squared, a co-op-based puzzler from SMG Studio – a Sydney-based developer. I’ve played the game a couple times at PAX and enjoyed what I played, so I am keen to see the risultato finale (translation: end result in Italian – I told you I was cultured). Lastly, I am excited to get the winter jorts out, drop the gloves and get into a good old-fashioned donnybrook in Old Time Hockey, a fun new take on the ice hockey games of yore.

It’s been quite a long time since I’ve been tight in the jorts about anything gaming related, mainly because I’ve been too flat out with life to do any gaming short of a few games of OW. Finally, when it seems like I was going to have time for some gaming the University year starts up and I’m once again flat out. However, as a returning student in my first year of a required one year at uni, it would be my duty to do as I did the first time around: play video games and neglect my coursework. What better time to neglect than the first few weeks and look at that, Horizon Zero Dawn released on the first of the month! That’s a title I’ll be getting a little har…I mean tight… over. While we’re talking tight, KH 1.5 + 2.5 at the end of the month! Those are titles I’ve only ever played snippets of and never really got the full experience. I can tell you now, I will be getting around those to the detriment of Principles of Economics!

February was a pretty great month for me. Both games that I was tight for delivered with flying colours and I couldn’t be happier. That being said, February has now gone by and with the coming of March comes a new wave of releases that make me tight. First and foremost, Horizon: Zero Dawn. This has to be one of the sickest looking games I’ve seen in a long time and if review scores are anything to go by, it will more than likely deliver. Guerrilla Games have been working on this titles for about five years and the attention to detail really shows. Next up we have the Nintendo Switch and a few launch titles to go with it. The Switch really looks to be Nintendo’s leap back into the console gaming market following the abysmal Wii U. Most gamers shan’t forgive Nintendo for their…questionable choices…but for those that will the Switch could help to diversify the market in terms of software. To go along with the new piece of hardware I have Super Bomberman R, it’s Bomberman… how could I not? Next up I have Fast RMX, Shovel Knight and I Am Setsuna. While two of these are previously released games, I also adored them, so having the chance to play them (especially I Am Setsuna) on the go is just fantastic. Fast RMX also appears to be a WipEout style racer and if you know me, I need my WipEout type racers. Last on the Switch list is the behemoth known as BREATH OF THE WILD!!! I am a huge Zelda fan, though I haven’t always had the means to access the games. RPGs are easily my favourite type of game and it really does look like Breath of the Wild will not only be an incredible Zelda game, but an incredible RPG to boot. Next up we have the game which has me the tightest of them all – NieR: Automata. Developed by PlatinumGames and published by Square Enix, NieR: Automata plays fantastically (from the publicly available demo on PSN and the preview build that I played) and it looks like it’ll have an interesting narrative to go along with it. It seems as if Platinum have gone above and beyond with this game, ensuring it isn’t one of their notorious ‘miss’ titles (given their notoriety for being a hit or miss developer). Lastly, I have Mass Effect: Andromeda. I don’t actually know too much about this title and I admittedly haven’t played the previous games. However, you can’t deny the impact the Mass Effect games have had on the industry so maybe it’s time I see what all the hullabaloo is about. All-in-all, March appears to be a massive month for me offering both a plethora of games and a new piece of hardware. I’m sure my bank will love me for this, they always do.

I have had a small break from picking up a controller, but March is throwing out some decent old titles that tickle my niblets, specifically Horizon: Zero Dawn. Many reasons fuel this decision, the gameplay looks pretty and the storyline sounds interesting, but I’m more drawn towards the creative-looking hostiles and the way they’re killed. It seems they all have a certain personality and all pose different threats for you to try and work out and execute before you bite the dust. The game seems to channel a bit of “Farcry Primal” and I’m a massive Ubisoft fanboy so I’m hoping I enjoy this as much as I think I will. Crafting, many missions, open worlds and killing stuff should make for a captivating experience.

March is a glorious month. It is the month I graced this watery planet with my amazing presence. It also happens to be the month where many developers/publishers decided to unleash the big guns, and wage a full-frontal assault on our wallets. Firstly, I’ll be pledging my soul back to the Nintendo gods with the purchase of my Nintendo Switch, a console that I was happily not going to purchase – right up until I tried one and loved it. I am a fickle idiot, and my apparent hate of savings does little to stop me. Because of this, I am ready to dedicate a nice chunk of my March existence to Zelda: Breath of the Wild – the first Zelda game in many a year to really grapple my goolies. I am truly excited to explore this title, and even more excited to see where the series goes after dipping its toe in the ‘open world’ waters. Horizon: Zero Dawn is a game with a stupid name, but an amazing premise. It manages to capture me in so many ways, thanks to its efforts to combine as many storytelling beats that I enjoy into one wonderful experience. A savage world? Love it. Post-apocalyptic, but not Mad Max-esque? Fantastic. Female protagonist? Radical! AND ROBOT DINOSAUR THINGS, hell yes, I am in this beotch like nobody’s business. Get in my life, you dumbly named videogame masterpiece-to-be.

I feel like I must be the only person in the universe who doesn’t give a shit about the Switch. That isn’t to say I don’t think it could be a great console for the Nintendo fans out there, I just have zero interest in it. Switch aside, my jorts are at peak bulge for the next chapter in the Mass Effect universe with Andromeda. Mass Effect 2 may be in my top 5 games of all time, if Bioware can match even half of just how good that experience was, I will be one happy space camper. Impressions so far look great and I certainly don’t think we’ll be seeing another Mass Effect 3 ending fiasco. My space jorts are ready! Also Horizon: Zero Dawn looks mint (and reviews are solid) – in Guerrilla we trust!

Although I love multiplayer games and online adversarial experiences in general, I’m loving the quality single-player games that are emerging. Having just reviewed Horizon Zero Dawn I can say it’s fantastic, but March also holds two other single-player titles that have jorts malfunction written all over them. Nier: Automata is one of these, and being a massive fan of PlatinumGames’ work and having enjoyed the demo I’m positive this is going to be a unique and stylish experience. However, my main focus will be Mass Effect: Andromeda. I’ve purposely been avoiding coverage of Andromeda because I don’t like these things spoiled, but I have great faith in Bioware as a developer. Bioware created one of the greatest games of all time in Knights of the Old Republic, and I will never forget my time with the evil space bitch FemShep I created for my journey through the epic Mass Effect trilogy *sudden painful memories of making love to the flight deck commander only to have her completely ignore me the next day*. Andromeda has had a long time to gestate, and as long as Bioware stick to their guns we’ll have a winner. Also, as someone who has rented his entire life, I’m pretty good at finding a new home, which should put me in good stead for Andromeda.