Forget what anyone has ever told you about Titanfall, it was a near perfect game. With its blinding mix of slick mechanics, awesome moment-to-moment gameplay and buttery smooth netcode powered by dedicated server infrastructure, it remains one of the finest FPS I have ever played. I was saddened to see that a decent-sized community never truly rallied around it, as it deserved a far better fate than slinking into relative oblivion as it did. Being an MS exclusive (on what was and still is the underdog console of this generation with a certain level of negativity attached to it) probably didn’t help, but Respawn did manage to shoot themselves in the foot with a lack of variety in the weapons and modes. For many, the lack of a single-player campaign also stung, despite the fact that this would have likely detracted from the development of the exceptional multiplayer experience. Despite its shortcomings, for me none of them could tarnish the impeccable gameplay. The way Respawn managed to balance tiny human Pilots fighting each other as well as giant mechs was simply phenomenal, and spoke to the developer’s strong talent and flair for multiplayer FPS (many members were ex-Infinity Ward devs who had contributed to the meteoric success of Call of Duty 4: Modern Warfare).

So needless to say, when Titanfall 2 was finally announced I was more than a little excited. Here was the perfect opportunity to right the wrongs of the past, to replicate the gameplay of the first but throw in a single-player campaign and some more weapon/Titan variety in a multiplatform environment. But Respawn have not taken the easy route on this one, choosing instead to alter and tweak the core gameplay in unexpected (and some might argue unwelcome) ways. I must say I was initially fairly underwhelmed with the pre-alpha tech test (read: beta), but after sinking in a fair few hours I can now see what Respawn are trying to do with TF2. Some elements are certainly more successful than others, but overall I think TF2 will be a strong title. Let’s have a look at some of the major changes and what works and what doesn’t.

There’s no denying that the overall pace has been slowed; Pilots are slower, Titans are slower, and the whole thing has a more ‘boots-on-the-ground-feel’ than its predecessor. In the original Titanfall I never felt tethered to the ground as a Pilot; I was in constant motion as I traversed from building to building with lightning speed, rarely stopping in one spot for fear of being picked off by a fellow Pilot or hulking Titan. In TF2 I feel like I am spending a lot of time running on the ground, and I don’t feel nearly as free because of it. This sense of weight is even greater in the Titans, which are no longer quite as smooth to control. In the case of Scorch I felt like a massive target that moved with the grace of an overweight beluga in a tap-dancing competition. Movement fluidity is a key aspect of the Titanfall experience, and I expect Respawn will be making further changes to this in response to community feedback. The issues with Pilot movement are probably more evident due to level design (the tech test featured some fairly open level designs with a lack of verticality) and will simply take getting used to, but the Titans simply need to move faster, or have faster recharging dash cores (or more of them). It’s possible that the two Titans we have been treated to in the tech test are on the slower end of the spectrum (Scorch obviously is), but at the moment it just doesn’t feel quite right.

Titan vs Pilot Balance and the Rodeo Mechanic

The balance of Titan vs Pilot has been severely tilted back towards Pilots, and while it’s not necessarily a bad thing, it’s certainly…different. Perhaps it is the result of people complaining about how powerful they were in the original, but I’d argue this is how it’s supposed to be. In TF you feared the Titans; if you were caught out in the open as a Pilot and a Titan had you in their sights you were most likely about to die (at least if I was looking at you). But even if you were terrible at the game you were still guaranteed at one point to have a roam about in a Titan and perhaps nail a Pilot or two. To balance this, Pilots had nimbleness on their side, and if you were smart you could use the environment to elude the Titans and fire off sneaky shots at them when you had the chance in the hope of taking them down (with successful hits also speeding up delivery of your own Titan). Rodeoing titans was fun in the original Titanfall, but incredibly risky with not a great deal of reward. Titan delivery has become much slower in TF2, and it’s clear that Respawn want to incentivise the rodeo mechanic by making this by far the most lucrative way of getting one of those big mechs express posted from the sky. Pilots in TF2 will board your Titan with reckless abandon, and those nimble bastards are now also a little harder to take down (at least with the two Titans we had to muck around with). All this adds together to mean Pilots now seem to focus very heavily on bravely chasing after Titans, but it does actually encourage a bit of team work, as pulling out an enemy Titan’s battery and plugging it into your mate’s Titan gives them precious shields while vastly decreasing your own Titan delivery time (seriously it’s a massive gain, help a brother out). Gone is the golden era of complete Titan dominance; someone’s given the Pilot’s quite a pep talk so expect to have them crawling all over you for fun and profit. All in all I think this new balance could work, but they could afford to diversify the ways in which you speed up Titan delivery (currently rodeoing is by far your best option), perhaps by increasing the contribution that Pilot and Titan kills make to it. They could also give more incentives in objective-based game modes, as currently capping and amping hardpoints gives you too little Titan build reduction, and depositing cash in Bounty Hunter gives you absolutely nothing (I’ll talk more about this mode in a second).

Respawn were widely lambasted for including AI enemies in Titanfall, but many ignore the fact that it actually worked quite well. TF’s flagship mode Attrition had you fighting Pilots and Titans while also fighting against laughably weak AI that could be easily killed for cheap thrills and points. You gained a lot more points for killing Pilots and Titans, but for those who weren’t as skilled in that aspect you could still contribute to the team and simultaneously speed up delievery of your Titan by going grunt hunting. It made the levels feel chaotic and gave a real impression of large conflict. It also took skill to quickly recognise an enemy Pilot amongst the AI, which you could do by watching how they moved. As Titanfall’s most poular mode it is baffling as to why it is not in this beta tech test, and I fervently hope it makes a return. Bounty Hunter is apparently the evolution of Attrition, but it’s simply not compelling enough to be the central mode. While the concept of Bounty Hunter is fine (kill enemy AI and the other team to get cash that is then deposited in banks that appear periodically), I want a game type where I don’t have to focus on some arbitrary objective, but rather on killing everything that moves while trying to stay alive. Most shooters of this ilk have a Team Deathmatch game type of some sorts, and in most cases it is the most populated playlist by a very large margin.  None of the modes in the tech test feel like they deserve the mantle of a central mode, give us back Attrition, or at least give us straight TDM.

This is probably less important than the other issues mentioned above, but it’s annoying nonetheless. In the original Titanfall you could at any point pull up stats as to how many Pilots you had killed, how many Titans you had killed, and how many times you had died. Of course you could see everyone else’s stats too provided they were in the same match as you. In TF2, kill stats are no longer separated into Pilot and Titan kills, and deaths can’t be seen either. I can’t help but feel this is catering to the sensitive crowd who need a safe space to play their online adversarial multiplayer games without fear of having their terrible stats viewed by others. I don’t care about other people’s stats, I care about my own; I’d like to know how I am performing, and kill/death ratio is one of the good indicators of that. 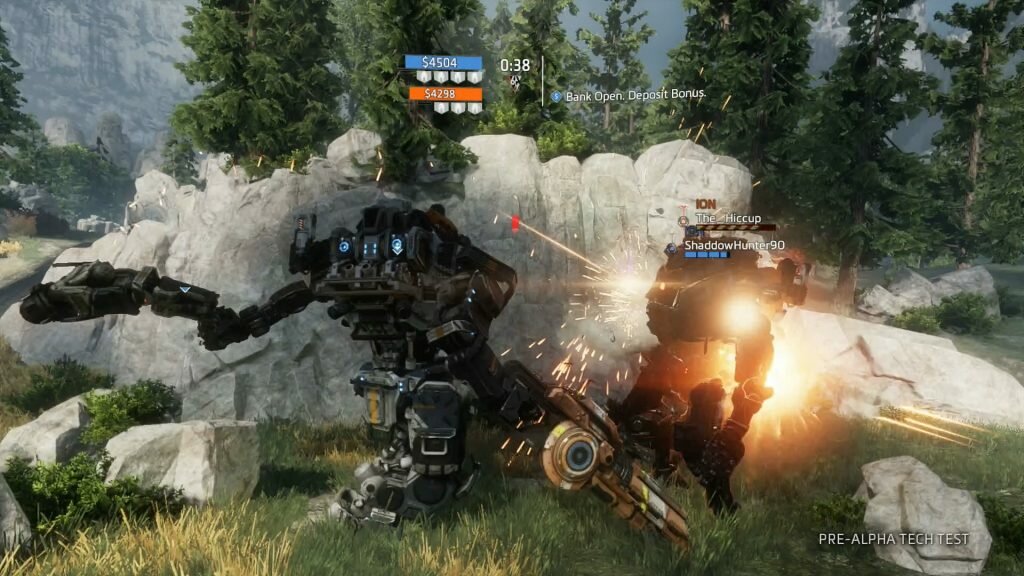 DYEGB’s Taylor Jeffrey getting rekt by yours truly

While it probably seems like my criticisms outweigh my positive feelings, I actually really enjoyed the tech test and despite the broad changes there’s still a lot to love. As with its predecessor the game looks really crisp and runs at a steady 60 fps, and matches are still filled with hilarious and epic moments. Respawn also seem to be on track to deliver in terms of weapon and Titan variety, and I’m very much looking forward to seeing the entire arsenal. Above all though, the netcode is still meticulous, with an expanded dedicated server infrastructure in full swing such that lag and latency are minimised, and hit detection feels spot on. Call of Duty by comparison has never had dedicated servers on console, and their ancient peer-to-peer netcode is an embarrassment (and flies in the face of the otherwise exceptional quality and balancing of its multiplayer aspect). It is clear that Respawn are dedicated to providing the absolute highest quality online experience possible, and as a member of a geographically-isolated, sparsely populated nation with third-world quality internet this is greatly appreciated. I’m confident Respawn can pull it all together, and I’d welcome a delay in the game’s development to ensure that everything was balanced and running smoothly. While I’d argue that they didn’t really need to change the core gameplay of the first title, after playing for a while I’m willing to run with their vision for TF2.