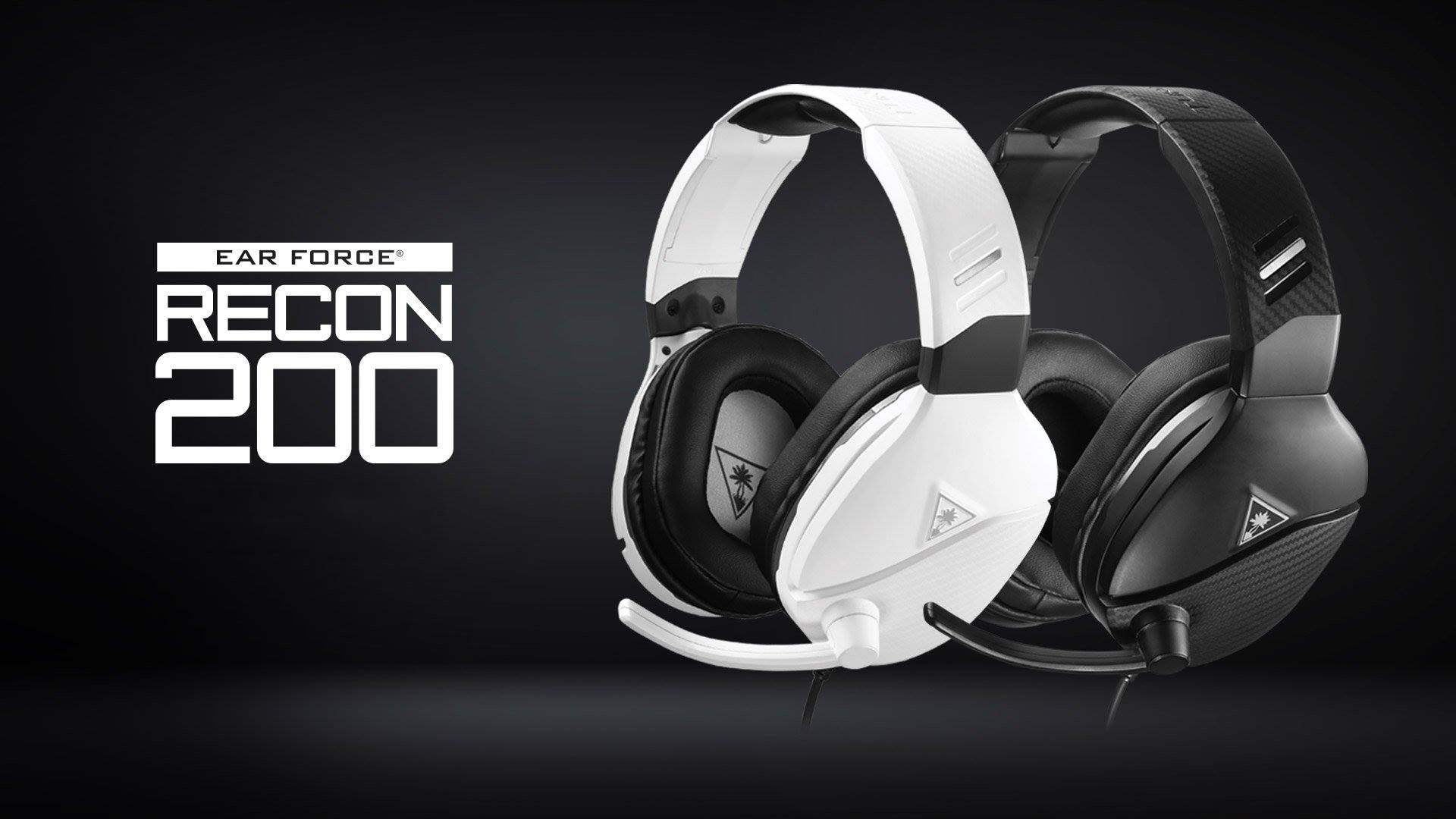 Getting a decent headset for a reasonable price can be difficult. For the last year or two, I was running the Turtle Beach Stealth 500P headset, a headset which I can’t really recommend, as within that time I’ve had to make the decision to retire them after they entered a state of disrepair. I was sent a pair of the Turtle Beach Recon 200s just in time for my Kingdom Hearts 3 review, and have given them a solid workout to see what they bring to the audio table.

To kick things off, the Turtle Beach Recon 200 headset is a sturdy, relatively inexpensive, wired headset which works for the Xbox One, PS4, Nintendo Switch and PC. It has a hard plastic shell, with the inside of the frame being reinforced with steel to increase the rigidity of the frame and help stop it from breaking. It features two 40 mm speakers, one on each ear, and a flip-to-mute mic. It uses what Turtle Beach calls ‘amplified audio and Bass Boost’ which explains why their wired headset needs to be charged. The headset is almost like a noise-cancelling headset when turned on, with the focus on making sure the sounds coming through are as clear as possible by isolating audio and blocking out the external spill. I was actually very surprised by the quality of sound that came from this headset. Given the low price point ($99.95), I was expecting the quality of the speakers within the headset to be much lower than they are. I used the DOOM (2016) soundtrack to test the range of the speakers themselves and I found that the speakers were far more than capable of whatever was thrown at them. I wouldn’t put them up against my Sennheiser RS-175s, but they are also close to $400 more. Regardless, the Recon 200s have a great range and I found myself continually impressed with how the headset handled all the audio pumped through (there was a lot of use).

The headset offers two profile which handle their ranges slightly differently. The first profile is for the PS4 and, when switching to this profile, you will notice that it tends to make things a little louder. You may or may not know, but the Xbox One handles its audio much better than the PS4 does, even going as far as offering support for Dolby Atmos, so it makes sense to me that the headset offers profiles that are better designed for each platform. I tended to use the headset on my PC a lot (once I finished with KH3) and so I found that it handled most ranges that my PC threw at it better with the Xbox One profile. To be fair, you could easily get away with using one profile for everything, but the profiles are better tuned for how each platform handles audio. I struggled using the PS4 profile because I’m not a fan of the ‘louder is better’ approach. Naturally, because you have to have a profile active to use the headphones, the wired headset does require charge to function, which can be a bit weird (I was thrown for a loop when I learned I had to charge a wired headset).

In terms of comfortability, the Recon 200s were… really good, actually. They have the standard synthetic leather on the main part of the cushion but they also have proper cloth in the inside which helps with the breathability of the headset over your ears. This is actually very good as it reduces moisture and potential bacteria growth (bacteria loves moisture), which goes a lot further than you would think. The headset was incredibly comfortable, which came as a great surprise as I’m not used to this quality at such a low price. The build quality of the Recon 200s also lends itself to the great comfortability of the headset. The headset doesn’t feel flimsy and holds its shape well. I was also glad to see that the ear cups/cushioning had close to equal pressure. I’ve found with a lot of gaming headset that the cups tend to have downward pressure, meaning that the hinges apply more pressure to the bottom of the earcups which eventually leads to the headset being uncomfortable during long play sessions, but the Recon 200’s relatively even pressure stops that from happening. Obviously, your mileage may vary, as downward pressure can be favourable for people whose head may better suit it, but in most cases, even pressure is the way to go.

The Recon 200s offer a flip-to-mute microphone that is of decent quality. It’s nothing exceptional, but it definitely does the job well enough. I wouldn’t really use it for my PC (I have a high-grade microphone for PC, to be fair) but if I’m on my PS4 or Xbox, I wouldn’t really have any qualms with using the microphone to talk to people (or breathe heavily while eating chips). My only real issue with the headset, in general, has to do with the volume sliders. With Turtle Beach headsets you have two volume sliders – one is for chat volume and the other is for general audio. The Recon 200s are no exception to this, however, the chat slider only really determined how much I could hear my voice (and I hate hearing my voice). I really felt no need to have this slider up at all as I could hear my friends via chat just fine and they could all hear me just fine. So really, if I felt like wanting to punch myself in the face I’d have this slider up. Outside of this, there weren’t really any other issues I had with the headset.

All-in-all, I can quite comfortably recommend the Turtle Beach Recon 200s. They offer great sound profiles tuned for either Xbox or PS4, a decent microphone, great build quality and are surprisingly comfortable. If you are looking for a great, affordable headset, definitely give these a try.