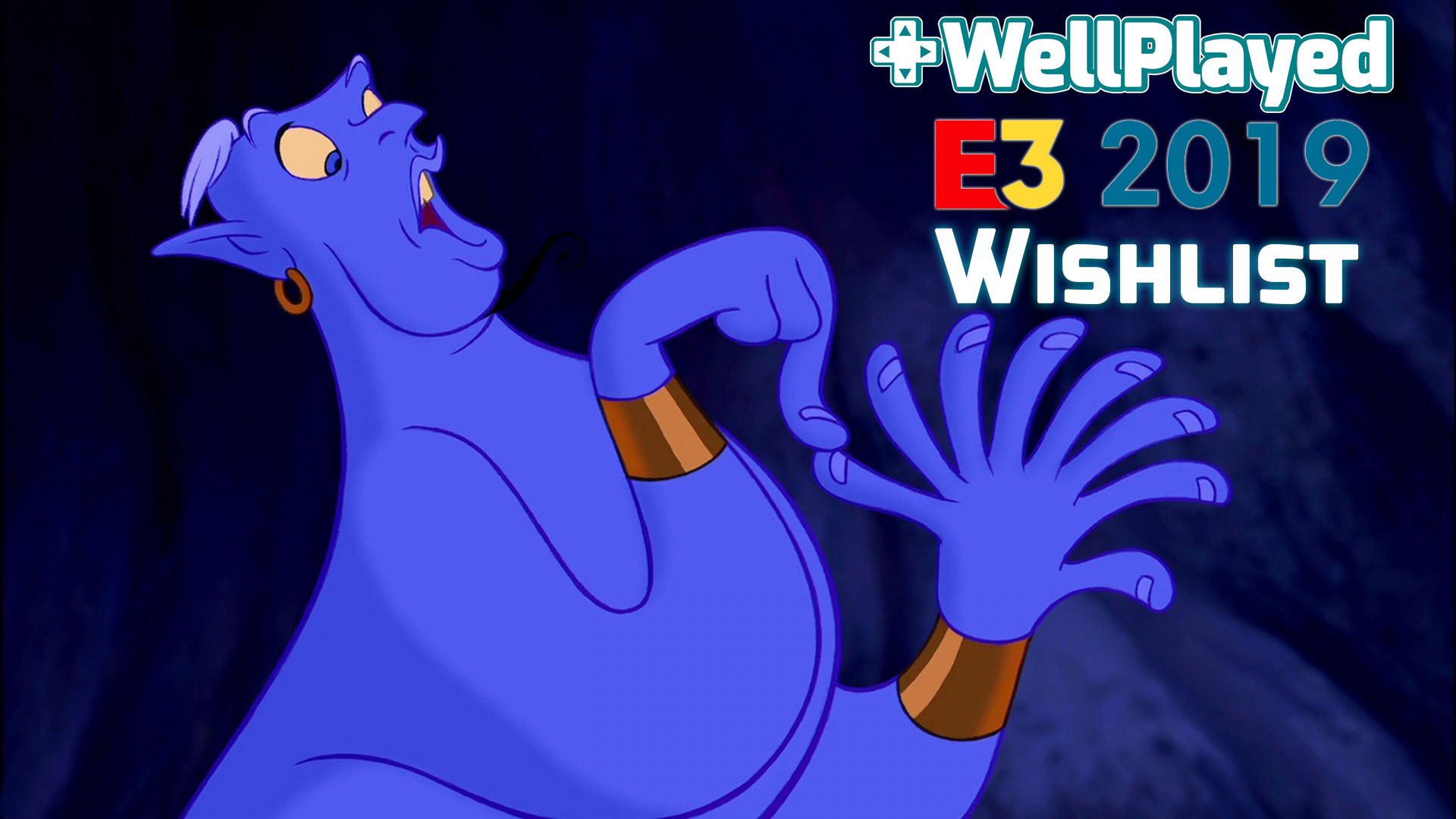 Nintendo. Please. I’m begging you. It’s been years. I’m as dry as a joke in a BBC historical drama, and I can’t hold out hope for nourishment much longer. If you have any Advance Wars or F-Zero in your heart, any at all…I would move Heaven and Earth for such a miracle as a new game in these series to happen. I would even take a remaster. Hell, I’d take a rerelease. I’m on my knees, begging like a fat kid does for cake. We know you love your big boys more than your wee ones, but please. Uncle Ninty, all I want for E3 is an end to droughts that have lasted more than a decade. Pretty please.

Hey! Games industry! No more teasing. Play your cards. Show me all the cool shit that I keep hearing about but am yet to see in decent detail. Show me Animal Crossing, show me more Final Fantasy VII Remake and give me a release date. Same goes for Cyberpunk 2077 and Luigi’s Mansion 3. It’s time to start making good. Psychonauts 2 is spared my wrath because I know it’ll be there on full display and at the same time I’m happy for Double Fine to keep quietly plugging away at the future Game of the Generation on their own time.

Do I want new stuff as well? Of course I do. Everyone wants to see a new IP announced at E3, and I challenge every major vendor to have at least one. Just one! After that, I’ll gladly accept a plethora of sequels/reboots/remakes in my favourite current and dormant franchises like Final Fantasy, Bioshock, Dino Crisis, Super Mario, Dragon Quest, Ape Escape, the list goes on. Basically what I’m saying is I want everything. All of it. Now. Please.

Honestly, most of my franchise wishlists have been answered throughout this generation so really I am just looking forward to being surprised. Whether that’s a new IP, reboot or remake, I’m game. It’d be nice to see some new VR titles get announced, so I will be paying extra attention to the VR stream playing throughout the exhibition. As far as longshots, I could never say no to a new Dead Space or Bioshock game.

In terms of what’s already been shown off, I am really excited to see more DOOM Eternal, Cyberpunk 2077 and Dying Light 2 while my intrigue is set on Halo Infinite, Starfield and Marvel’s Avengers, which we haven’t seen gameplay of yet. Overall though, I feel like Microsoft’s press conference will be the one to watch this year.

Firstly, if we don’t get to FINALLY see what Animal Crossing for Switch it looks like I will have to eat my Switch for the sustenance I crave. Also, where is Pikmin 4? It was apparently finished when the Wii U was alive and kicking, can we please get that with a Pikmin 3 Switch appetiser (with mappable controls this time for us lefties)? Speaking of ports, I’d love to see Wind Waker HD make its way to Switch. My pie-in-the-sky dream would have to be a hint at some GameCube games making their way Switch-side —Super Mario Sunshine would make my year though Paper Mario – A Thousand Year Door would also be epic!

Even with its gigantic indie library, I am still hoping to see some awesome indies such as Kynseed and Slime Rancher join their brethren on Switch. I’m also hoping that this E3 is the one where we finally get a release date for Ooblets and maybe a hint of a release on other consoles (it would print money on Switch just saying).

This is one of my first times going into an E3 without a huge amount of hype. Cyberpunk 2077 still has me interested and if we get hands-on footage and some form of a release window then I’ll be satisfied. Square Enix had me up at 3AM last year for one of the worst pressers I’ve ever seen but their lineup this year, including Marvel’s Avengers, has me more hopeful.

Otherwise, I’m really looking to be impressed by new IPs. Whether it’s Microsoft showing off the fruits of their studio acquisitions from last year or EA bouncing back after one of their toughest years critically (with Anthem pretty much dead in the water), I really just want to blown out of the water by announcements and have a good handful of titles that I can be looking forward to playing in the future.

As someone who has been to E3 before, and has been envious every year since I got to go, I always get mixed emotions around this time of year. I’m sad that I’m not in LA again, excited to see what’s to come, but also this is the one year I am worried about the conference being a bit lacking or flat in content due to Sony’s absence. I really need some good news! I have barely been excited for any games this year.

I am hoping for some Star Wars Jedi: Fallen Order news. This one is wrapped in mystery at the moment and I’m really nervous about EA still having the reigns on this franchise after many a failure in my eyes. From Square Enix, I’m really hoping we get a better understanding of this Marvel Avengers title and what kind of experience we are going to expect, I wanna be a superhero damnit! Lastly, WHAT IS THIS SIMPSON’S GAME? I’m really hoping for a *new* game, as opposed to a remaster of Simpson’s Hit and Run but I’ll take what I can get. Here’s hoping with my lack of hype for this E3 that we get a few surprises to come out way, something we wouldn’t expect, a new Bioshock perhaps? A woman can dream.

The hype surrounding this year’s E3 feels very different to previous years. I don’t know if that is primarily because Sony will not be in attendance or if it’s because a lot of announcements have already leaked or been revealed, but it doesn’t quite have the same aura surrounding it. Still, it doesn’t mean a man can’t dream, so let’s see what wishes the E3 genie is in store for.

With the absence of Sony a lot of expectation will be placed on Microsoft’s shoulders to bring the third-party goodness. One game in particular that I am hoping to see is Witchfire, the upcoming shooter from The Astronauts (The Vanishing of Ethan Carter). We’ve not seen much from the title at this point and it would be awesome to see Microsoft showcase it – feels unlikely though. Capcom has been one of the success stories of this generation, and with their rich back catalogue and penchant for remakes/remasters I’d love to see them announce either a reboot/remake of Dino Crisis or Onimusha: Warlords instead of another Resident Evil game. There have been whispers of a Dino Crisis reboot and Dino Crisis 3 was an Xbox exclusive, maybe it’s a sign. As is tradition I am wishing for a new Splinter Cell, but my gut tells me that it’s unlikely. My biggest hail Mary would be for Dishonored 3 to be announced, however, Arkane is more likely to be working on a Prey sequel. I’m also hoping we get release dates for GreedFall (UPDATE: release window of September 2019 was announced overnight) and Sniper Ghost Warrior Contracts. Get around me AA experiences.

E3, that wonderful time of year where the AAA industry ignores my wants and just gives me sequels I don’t care about. Fortunately, this year it seems my wishlist is going to be rather fulfilled, starting with The Legend of Zelda: Link’s Awakening. Zelda is by far one of my favourite IPs in existence and I’ve been dying to have more Zelda experiences on the Switch, (especially Wind Waker HD and Twilight Princess) so it would make sense that I was incredibly excited to see a new game coming to the Switch. I really hope they show it off at E3 with a release date.

Outside of that, I’m also hoping for some trailers and release dates for DOOM Eternal, Wolfenstein: Youngbloods, Halo: Infinite (this one I’m not expecting until 2020), Gears 5 and Ori & the Will of the Wisps. Normally my wishlist would be larger, but Sony’s absence puts a slight hold on that.

In this article:don't let me down 343i,E3 2019 wishlist,Genie ignore all these other peoples' wishes and grant mine,give us Troll and I 2,Phil you better be wearing a rad shirt this year