Lather on the body oil, let's get down to business

When I reviewed WWE 2K18 last year, it was still riding the reboot wave that was present with the modern WWE titles. This meant my expectations for WWE 2K19 were squarely in the realm of ‘provided it keeps improving the overall series, they are on the right path’. I wouldn’t describe these as low expectations – more so that they were well established.

Why yes, that IS Krusty the Clown Vs Reptile – With Bart Simpson ringside

What I ended up experiencing was a game that not only acknowledged its flaws, but provided some fantastic efforts to correct them. Simple things that bugged me about the 2K18 release, such as navigation and a boring story, had been addressed in spectacular fashion. However, small things that had wowed me previously were now lacking in places for some godforsaken reason, such as the removal of some elements from the customisation modes. 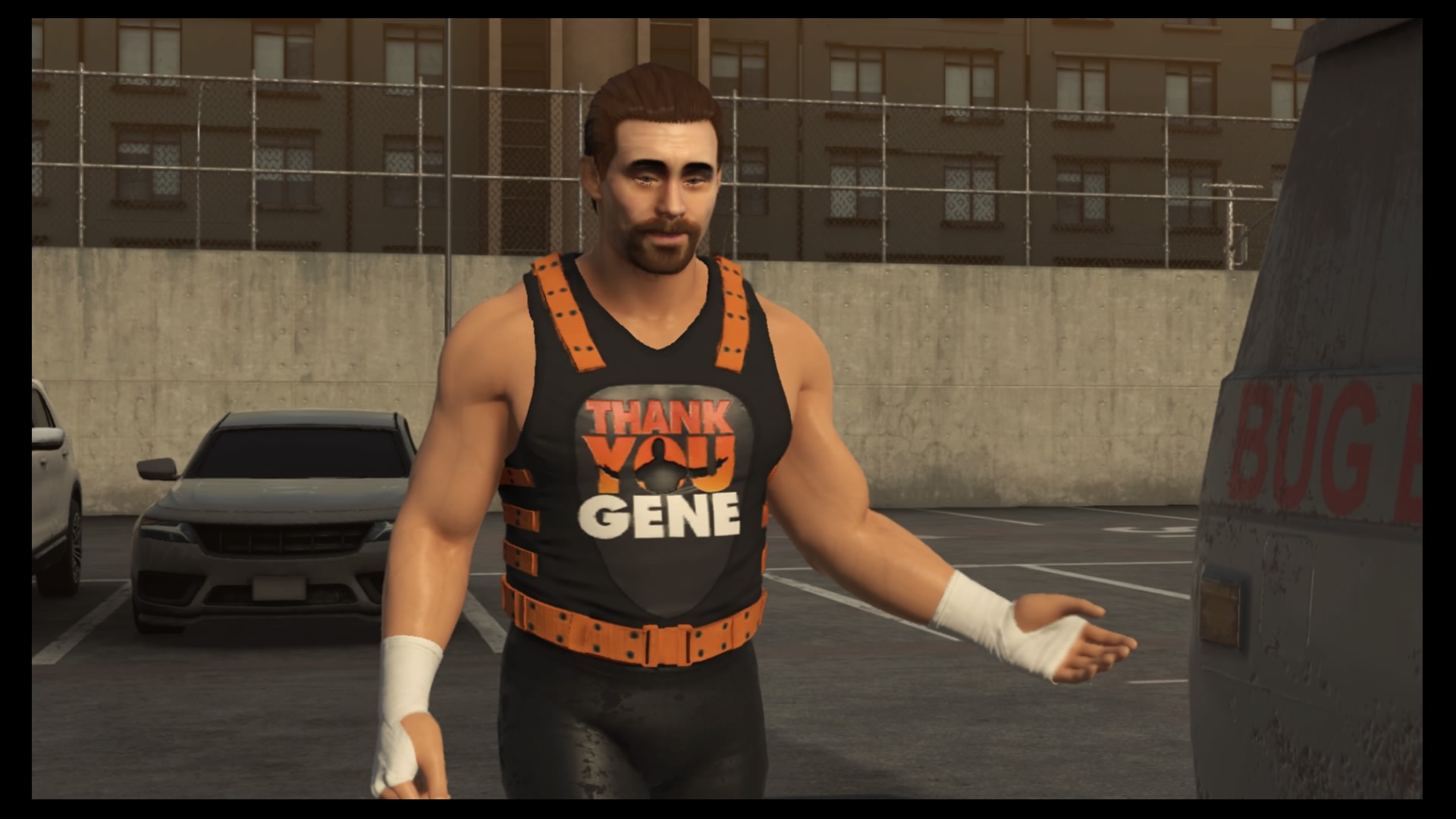 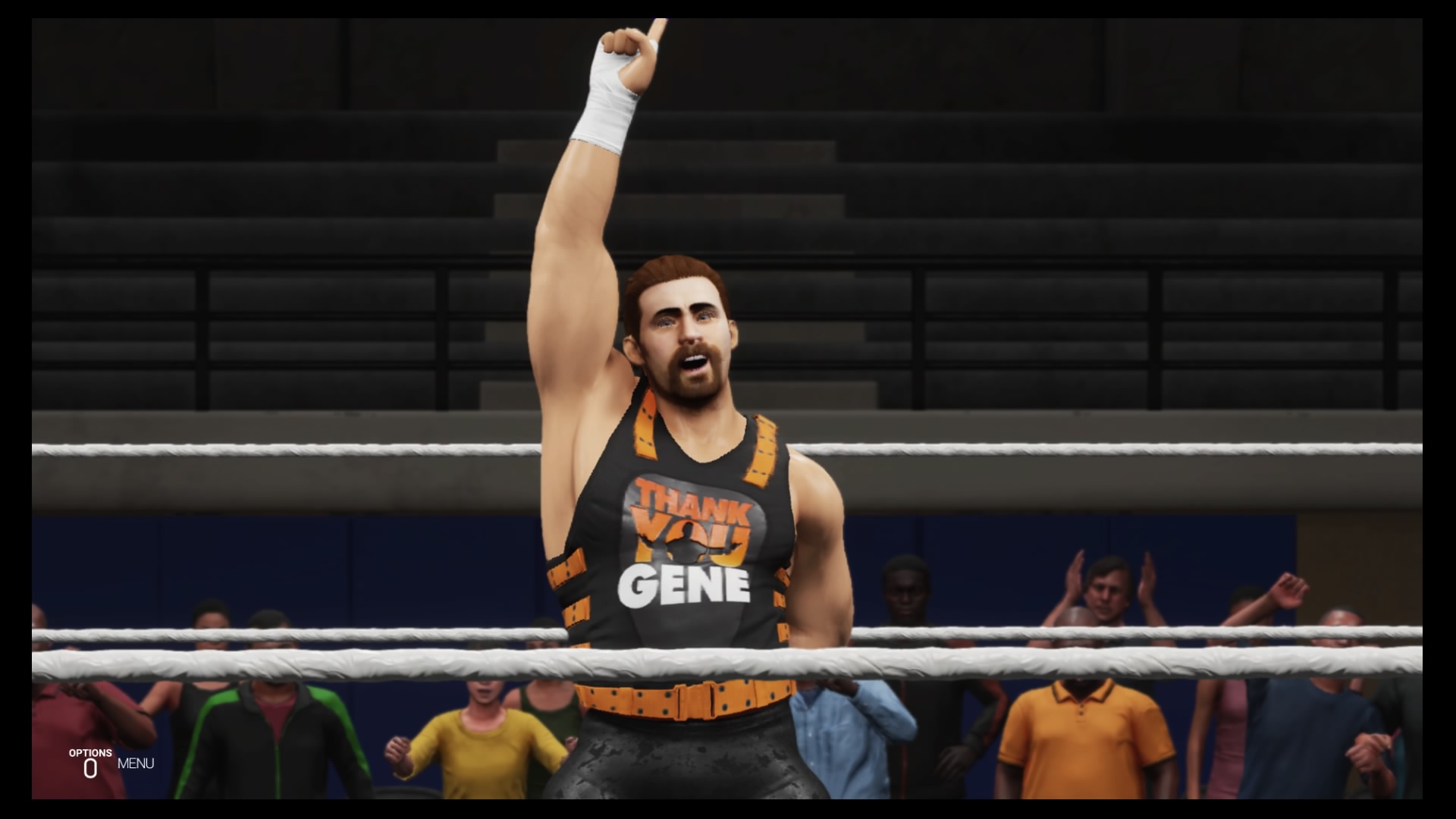 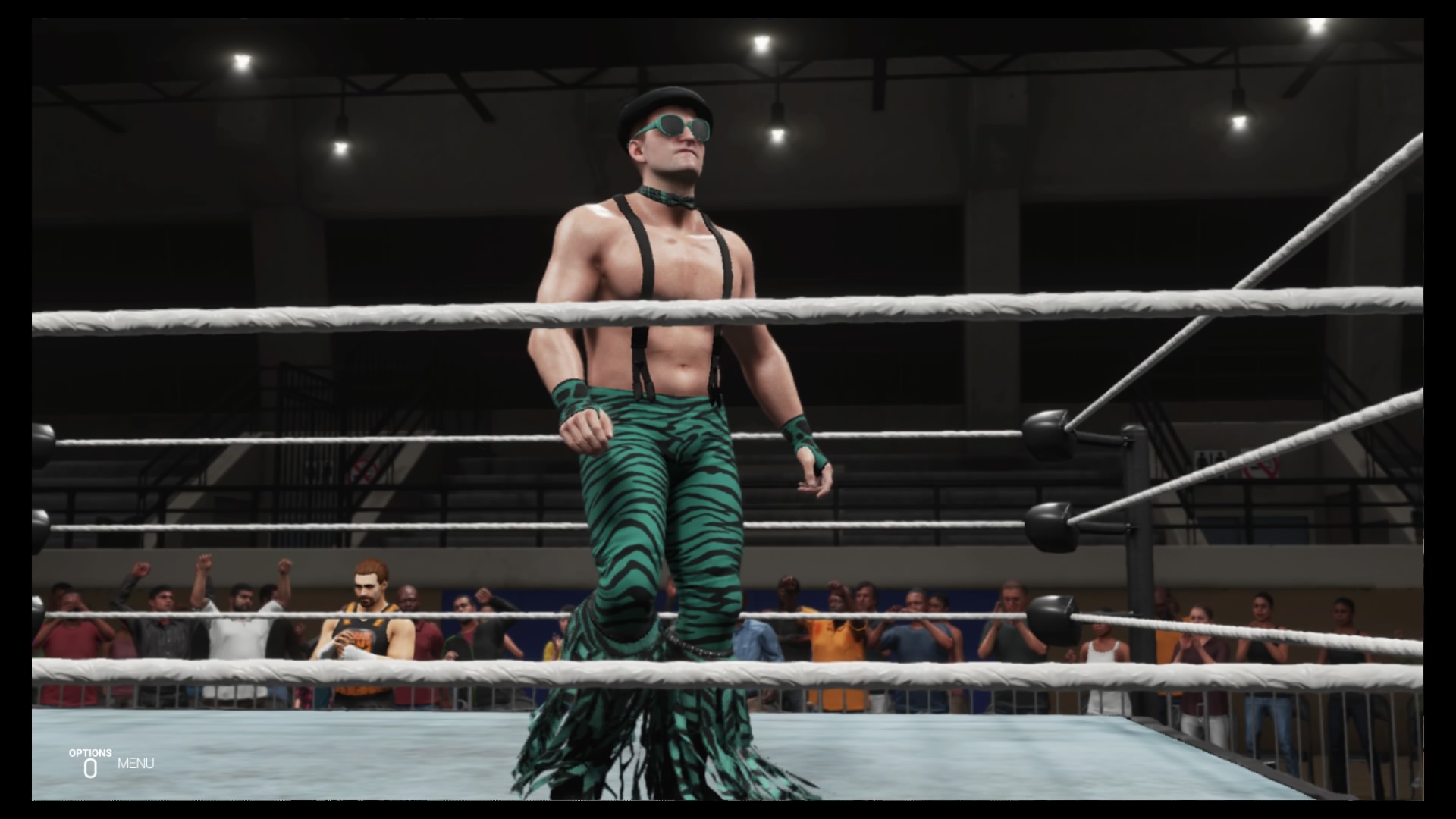 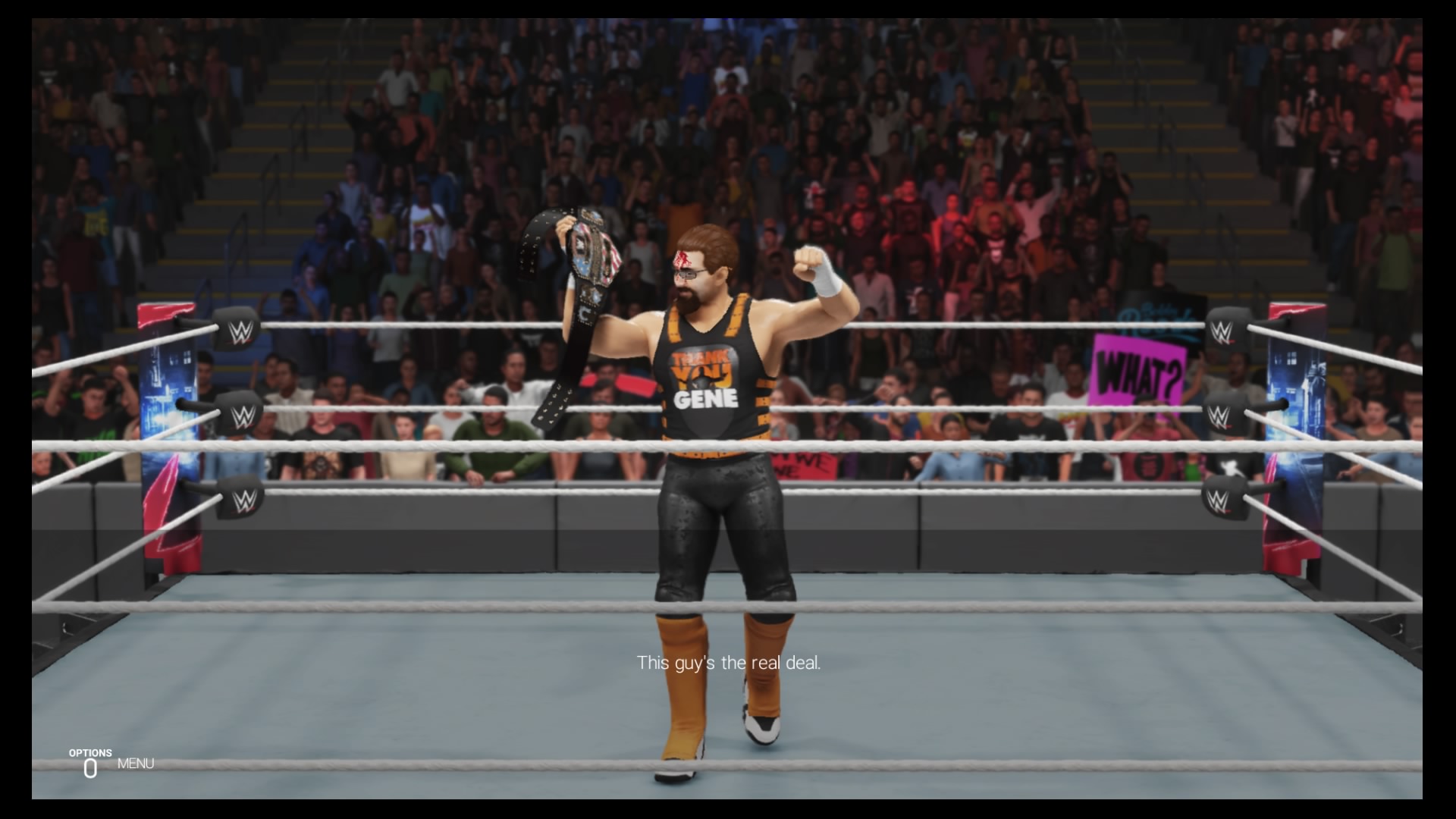 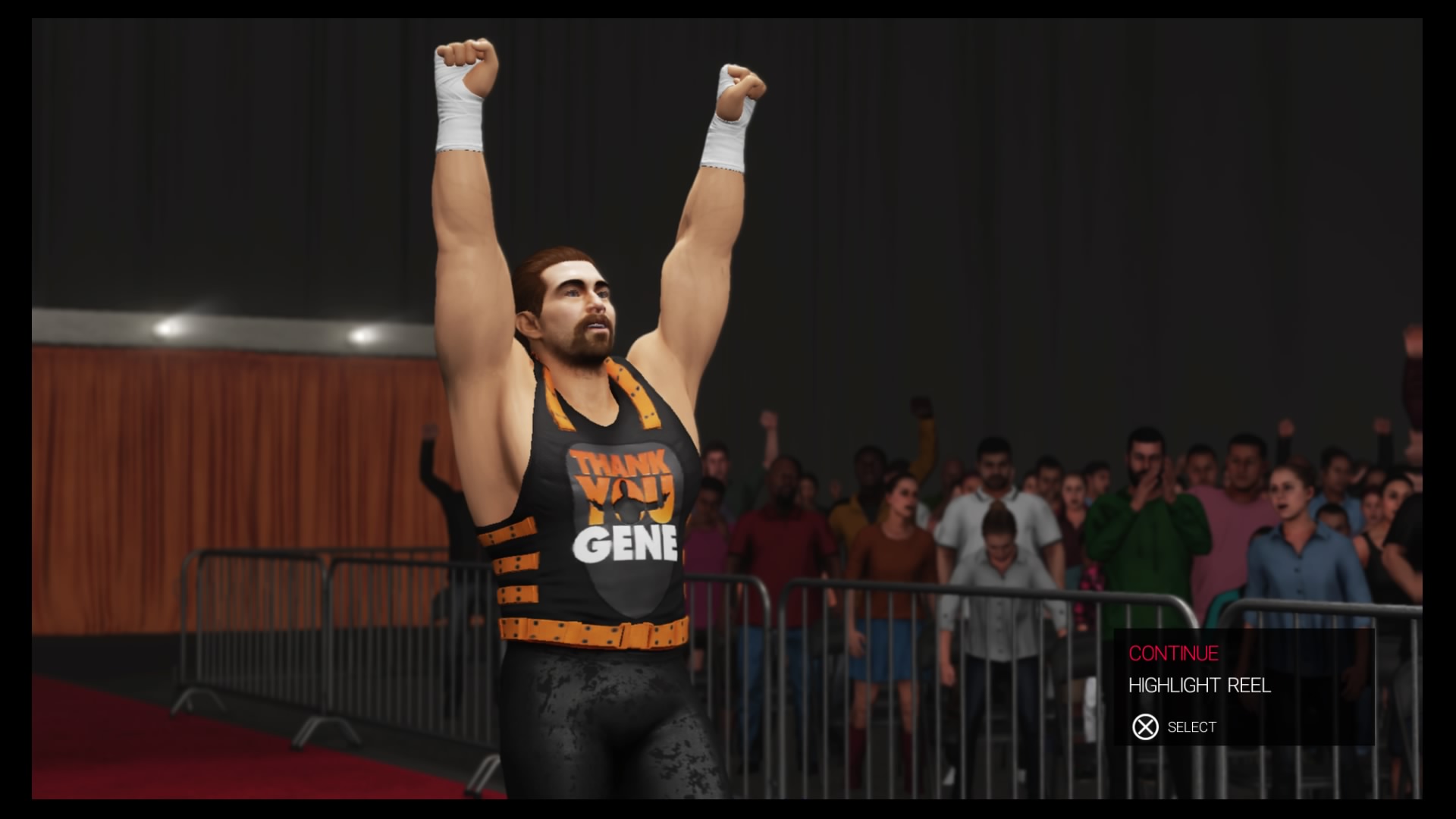 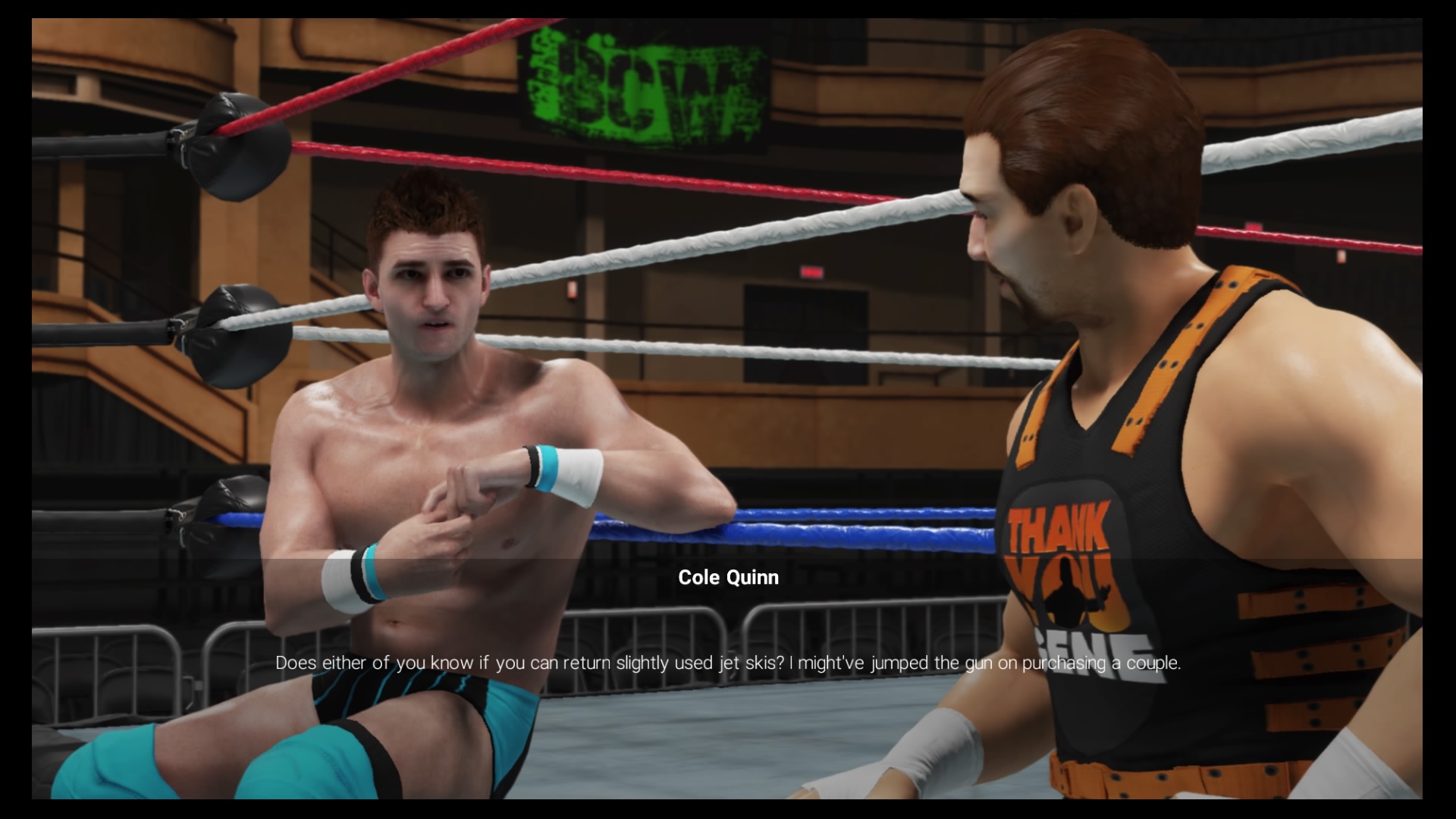 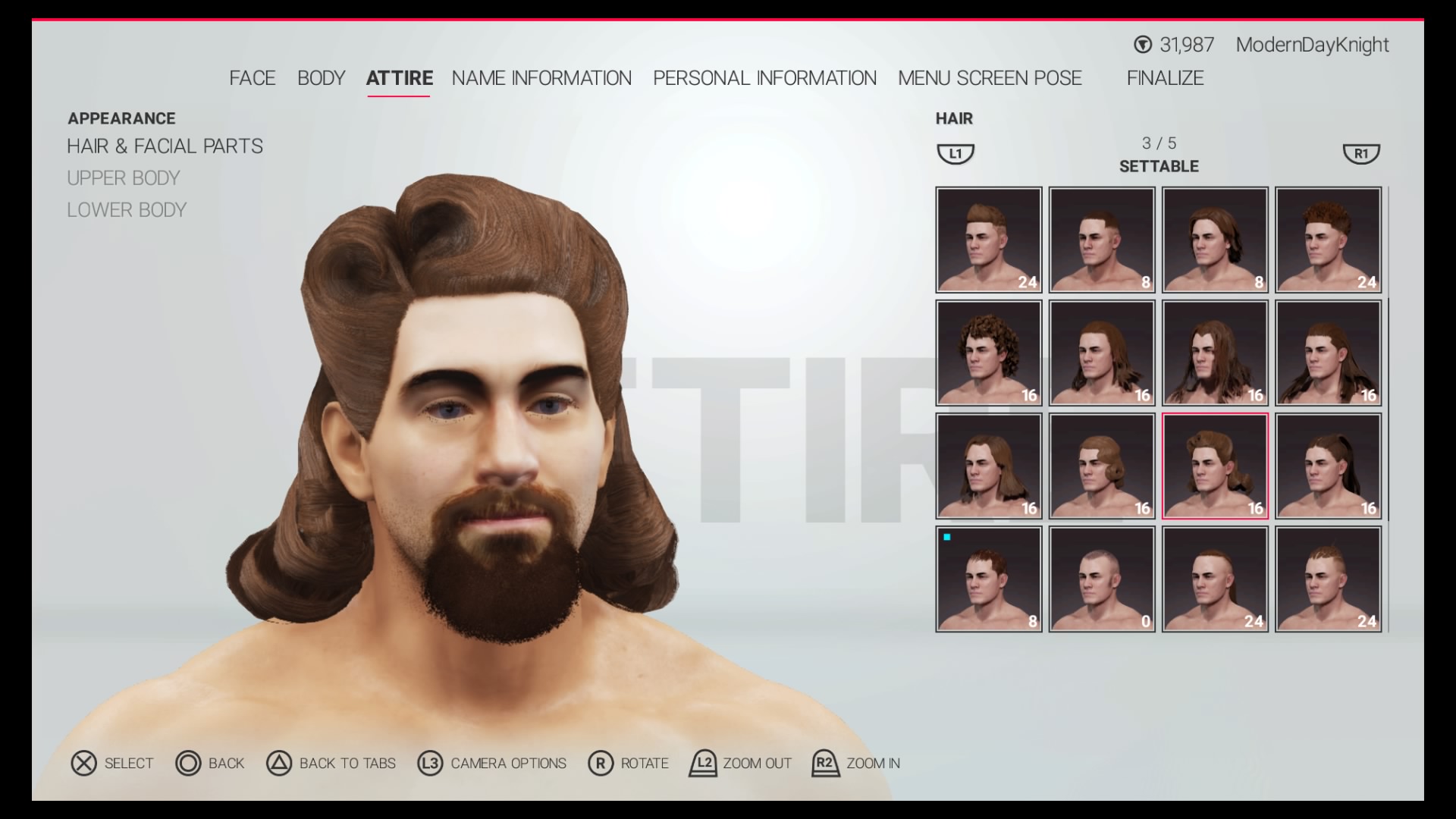 During my create-a-wrestler journey, I couldn’t help but feel underwhelmed by the initial offering of cosmetic items. I can understand that they would want to incentivise gameplay to get the flashiest gear, so you can feel some natural pride in how your characters grows as you do – but locking basic hair options? Allowing me to choose from a total of fuck-all beards? It feels jarring when just a short jaunt ago players were in the 2K18 title, awash in a sea of options – with yet more to be unlocked at their leisure. And many of these items do still exist in game, they are just locked immediately and require you to either unbox them from a lootbox-esque booster pack (ugh) or earn enough in-game credits to purchase directly (ugh again).

To the game’s credit (heh), you do gain these credits at a generous rate – my first unboxing experience saw me opening a total of 57 purchased loot boxes just to pad out my options as I made an array of muscular freaks with odd gimmicks. There was still the unerring feeling of sliminess in this practice, even after I coughed up seven thousand wrestlebux to buy a pair of plain glasses to complete my look.

The positives do outweigh the negatives however – the WWE story mode this year is a thing of beauty, and rightfully secedes the interesting effort from WWE 2K18. Gone are the ponderous wandering around sections, zombified WWE superstars that stare right through you and the frankly plain progression of your meteoric rise to fame. Instead this narrative paints the picture of you (an indie wrestler in a fairly average promotion) working the day-to-day of a struggling performance athlete, before having the opportunity of a lifetime appear before your very eyes – and be dashed just as quickly. What follows is a fun, goofy story of intrigue and go-get-’em as you climb your way back to the top, regaining that opportunity to join the WWE elite and make a name for yourself.

The WWE story mode this year is a thing of beauty

The real beauty of this create-a-player story mode is the fact that voice acting is not only present, but robust and interesting. Character interactions feel genuine and varied, and the characters themselves actually evoke interest in them. The dialogue of your initial rival, ‘Black Hole’ Cole, is a real treat – and a number of character moments between yourself and him as your friendship develops actually feel heartwarming. Send help, my naked man-fight simulator is making me feel things.

The voice acting for some of the WWE superstars fluctuates madly between exceptional and just plain iffy, almost as if the people recording these lines are not in fact professional voice actors. I wish I could list this as a detractor, but really all it does is paint a picture of these massive musclebound men cramped in a tiny recording booth, mouthing words off a script that has been written to appear as a simulacra of their wrestling persona. Amusing to no end.

What IS a detractor however, is the intensely unignorable discovery of WWE superstars that are not voiced by their real life counterparts. Wrestling is a medium that is devoured by fans, people who obsess over the subject matter – they live and breathe it. This means that the unauthentic stands outs like the sorest of thumbs, so when John Cena is not actually voiced by John Cena, it’s jarring to say the least. The explanation is a simple one – he obviously was not available to do it, but the question must be asked: could the developers perhaps have just not had him in the story mode to save the uncanny experience?

Your own player progression can feel daunting once you are step foot into the skill trees, but eventually the mess of paths and icons start to communicate some basic truths that will carry you far: increased momentum means more finishers, and increased stamina will stop you stumbling about like an idiot. Truth be told, that may just be my particular set of truths – but it worked a treat and I stopped getting styled upon for at least a short period of time. The real concern for me however was how the game did very little to organically teach me what to look for, with my first foray into the skill tree coming with a fistful of skill points – a situation that left me feeling like a kid in a candy store with a handful of coins; I had no idea what I wanted and it would be easy to make a bad choice and regret it forever.

The skill/stat trees are hella deep

This trends into an unshakeable awareness of your character’s inherent lack of biffo power. It makes sense that your indie-wrestler self (who lives in a van – true story) isn’t perhaps up to the grand standard of a WWE superstar, and from a narrative standpoint you can imagine that the game should nurture this sentiment and eventually abolish it as your power grows – however, this does not turn out to be the case.

At times you will be tested by situations where the odds are massively stacked against you, so much so that your only option may be to start assessing precisely how cheap you can play to get by. At one point the game challenged me with a gauntlet of WWE wrestlers – my player and his goofy sidekick, dressed as classic oldschool legends, had to somehow defeat them all, one after the other, without our health refilling. Defeat after jarring defeat plagues me, until I ended up conserving my stamina and playing a hilarious game of cat and mouse as I evaded my assailant – because I had discovered that my AI controlled team mate would generate finishing moves faster than I. So I effectively waited for him to dispatch someone before the two of us would team up and crush my opponent. An opportunity to feel truly powerful, squandered because my skill level just didn’t gel with the developer’s intentions. Bummer.

When Goldust isn’t even the weirdest guy in the match, you know you are in for a treat

Another gripe has to be squarely aimed at the commentary within the game. The familiar voices are fine, and the voice acting is great – it doesn’t feel manufactured and weird at all. The issue is with how the game has been developed to select and play these canned voice lines in an effort to make the experience realistic, because at times it is a dismal failure. Hearing Corey Graves exclaim THE POWER OF JINDER MAHAL is fine on its own, and to his merit, Jinder Mahal is a powerful dude. The thing I take issue with is when the game decides to tell me this interesting factoid not once, not twice – but nearly 8 times in a 30 second period. I was struggling to get through this match, and I felt every ounce of my concentration sapped as I just couldn’t think of anything but THE POWER OF JINDER MAHAL. I was trying to manage my stamina so I could jog back to the ring and ready my signature move, but – THE POWER OF JINDER MAHAL. What could I possibly do to overcome THE POWER OF JINDER MAHAL? The answer was nothing. I failed the match and elected to try again, deeply hoping I’d never encounter THE POWER OF JINDER MAHAL again.

The sheer POWER OF JINDER MAHAL

The offer of challenge towers for players is a stroke of genius by the lads at Yuke’s, finally answering the niggling query of ‘what encourages people to keep playing’ that plagued other titles. The great gimmicks and themes for these challenges means there is something for everyone, and your eye can’t help but catch titles like ‘90s Undertaker Tower’ as you are navigating menus, maybe even derailing your current train of thought as you feel an overwhelming urge to appreciate some oldschool deadman action. To my surprise, some of the towers even offer cosmetic rewards – alleviating a small portion of the frustration felt by the initial lacklustre wardrobe.

If you ever wanted to experience a wrestling career that is entirely fictional but entirely fun this is the game to do so. Exciting for fans and hilariously absurd for others, WWE 2K19 is an experience with something for everyone. There are definitely more ups than downs – but that doesn’t change the fact that those downs are present to begin with.