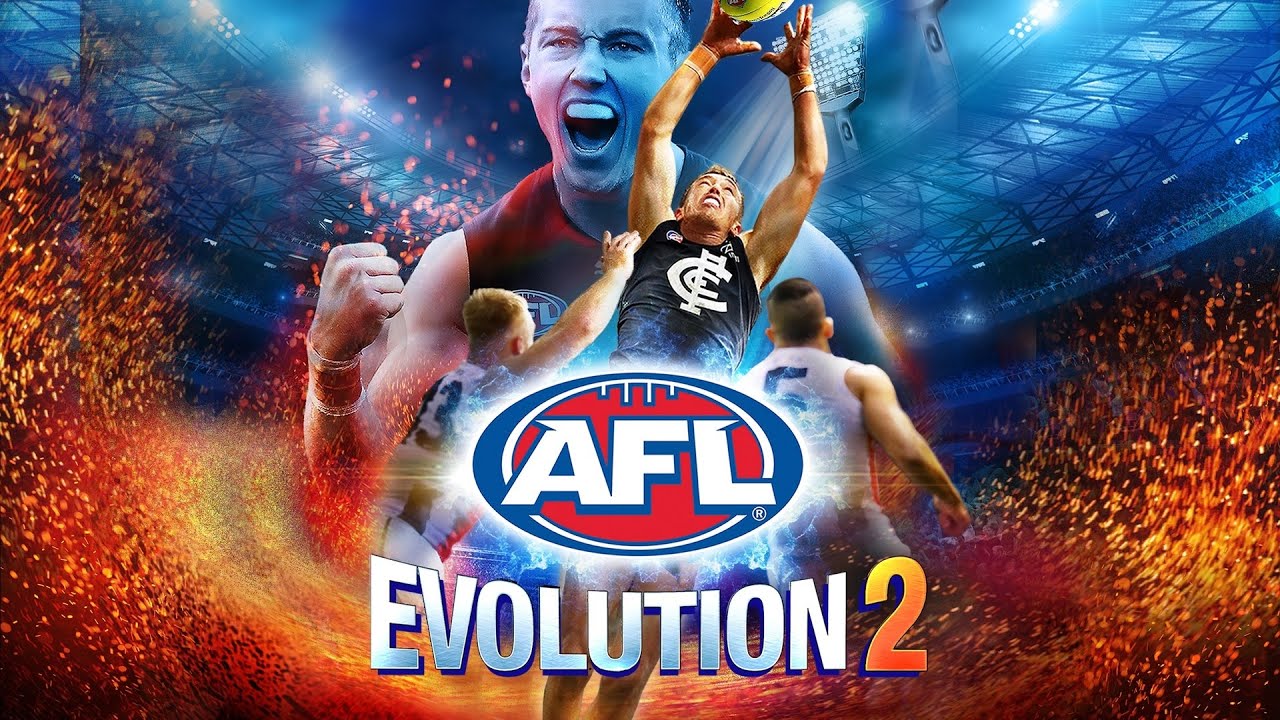 Like every other facet of life, the AFL has been hugely affected by the outbreak of COVID-19. With the 2020 season in limbo, footy fans all around Australia are craving footy action anyway they can get it, whether it be replays, highlights packages or having a kick in the backyard. But when you’ve watched the 1995 grand final DVD that many times that it no longer reads or pulled a hammy kicking ‘little chisellers’ in the backyard, how can you experience Australia’s great game? Thankfully after a couple years of teasing, the AFL, Tru Blu Entertainment and Wicked Witch have finally released the highly anticipated AFL Evolution 2.

It’s safe to say that the relationship between the AFL and video games is a lot like the one between Marcus Bontempelli and Toby Greene; a bit of a chequered history but plenty of potential for a good time given the right circumstances. The problem has always been three things: the sport itself, expectations and budget. It’s widely accepted that the nuances of AFL are hard to transition into a modern video game, especially with a limited budget and the weight of every AFL fan’s expectations on the developer’s shoulders. AFL Evolution 2 marks the fourth attempt by Wicked Witch to bring the sport to the world of video games, and in footy speak by the fourth crack at it you’d want to start delivering the goods. But while Evo 2 is certainly an upgrade on its predecessor and is the best modern AFL adaptation thus far, there’s still plenty of room for improvement.

Visually the game is an upgrade from Evo 1 in practically every facet, proving the move to Unreal Engine 4 to be a worthwhile decision. The grounds look slick and authentic and playing in the rain looks fantastic. Wicked Witch has done a solid job of replicating players’ likeness, although some fringe players may look like they were made with the mindset that ‘near enough is good enough,’ and then there’s the whole uncanny valley aspect when it comes to the facial animations.

But all this means nothing if the game plays like Gold Coast’s 2019 season, so thankfully the core gameplay experience of Evo 2 is relatively solid and fun. For the most part the game’s ball movement is pretty fluid, with handball chains and kicks into the forward 50 all executed without too much jank, and it’s easy to get caught up in the excitement when Jack Silvagni crumbs a pack and snaps a tasty sausage under pressure. It’s in these true football moments that the potential of Evo 2 is on display.

Gameday has seen many improved mechanics. Players can now choose their preferred type of kick from a set shot (drop punt, banana, snap), although drop punt set shots are still pretty easy to master. Tackling is based on timing rather simply the push of a button, and it feels easier to break and evade tackles than in Evo 1. The only overwhelming aspect of the gameplay is the sheer amount of controls that need to be mastered and with no hands-on tutorials (there are videos you can watch) it’s a trial and error process in getting adept at the controls. There are also a number of gameplay sliders that players can adjust to tailor their gameday experience.

Tactically the game has evolved too, with players constantly spreading to the fat side, leading into ideal spaces and generally not playing like they’re in an under 10s match. However, in saying that I was frequently able to run with the ball into a vacant forward line and stroll into an open goal and vice-versa. It could simply be a setting that needs to be adjusted so I am willing to give it the benefit of the doubt, unlike the umpires.

Wherever there’s football, there is going to be concerns with the umpiring and Evo 2 is no exception, with digital Razor Ray as sharp on the whistle here as he is in real life. I will admit it’s a huge upgrade from Evo 1 but I frequently found myself cursing and saying “Turn it up!” Or “You’re kidding me,” so in that regard it definitely delivers a true gameday experience. I was constantly getting pinged for holding the ball, and while probably the correct call, the issue stems from having play on and sprint mapped to the same button. I’m sure it’s something that players will get accustomed to over time, but being in the moment and running to take a mark only for the game to trigger play on is frustrating (it’s a bit like this moment). Furthermore there were times when I would kick the ball away only to be penalised for a throw.  Then there’s the issue of players going unpunished after running through the mark or standing right behind a player as they’re about to take a shot at goal (where’s the social distancing?). All we ask is for a little consistency Razor. And maybe some improved player AI.

Marking however still continues to be a constant irritation. The marking system in Evo 1 was one of its worst aspects and Wicked Witch has refined it somewhat in Evo 2. Instead of being purely about timing, this time around the game takes a player’s positioning and ability into consideration (and also timing). Is it better than Evo 1? Yes. But it still feels like a chook raffle as to whether you’ll clunk it, which is why I decided just to spoil as many contests as I can and mop up the crumbs.

…it’s easy to get caught up in the excitement when Jack Silvagni crumbs a pack and snaps a tasty sausage under pressure. It’s in these true football moments that the potential of Evo 2 is on display

Once again Evo 2 has a nice selection of modes to play, with Career Mode another highlight. Players are able to play as a listed player, a rookie or the coach and go for personal and/or team glory. While I managed to secure sweet seventeen for Carlton in Coach Mode, I’ve only dabbled in the other two modes. One issue I did encounter in Coach Mode was that frequently players would get injured only to reappear later in the game and then be ruled out for weeks after the match. Also when playing as a rookie (Rookie Mode) an issue I had was finding that no matter what I did in the seniors I would always find myself omitted the following week (now I know how Nick Graham felt). From my fleeting look online it seems to be a common issue, one that I hope Wicked Witch addresses soon. Sports games thrive on their online communities and Evo 2 is likely to be no different even though the number of modes is limited compared to a AAA sporting experience.

There is also a healthy number of teams from various leagues, including the AFLW, all the state leagues (except Tas and NT, as usual), as well as under 18s and international teams. The biggest issue here relates to both team and player ratings, with some questionable ratings across the park. Wicked Witch has confirmed it will be fixing these in an upcoming update. But if you can’t wait, Evo 2 has a robust set of creation tools that will allow you to edit players and their ratings to your thoughts. Plus, if you want to create your own team and go for the holy grail you can do so, custom guernsey and all.

Another area that has been totally revamped is the commentary, which sees the legendary Dennis Cometti and Matthew Richardson replaced with Anthony ‘Huddo’ Hudson and Garry Lyon. Huddo is easily is one of the best commentators in the game, so instantly it’s a good addition, and I’ve always rated Lyon’s analysis so the calling cast on paper is promising. However, hearing it in action is a different story, with the play-by-play commentary choppier than Paddy Dow’s kicking.

On several occasions Garry Lyon will natter some special comments that are simply wrong given the context of the game, such as “it’s why they find themselves losing this contest”, despite the fact that the scoreboard shows me ten goals ahead.

Does North Melbourne even have this many fans?

Furthermore, the introduction of team chants after a goal is a bit like many of Evo 2’s aspects, it has good intentions but the execution lets it down. Not only do the chants sound they were recorded for a Year 7 audio project, but on a couple occasions the crowd started chanting the wrong team’s chant. They’re also incredibly annoying given they are after every goal and there’s no way to adjust the frequency without turning the crowd noise off entirely. Plus, I don’t think I’ve ever heard the Carlton Cheer Squad chant “Let’s go Blue Boys, let’s go!” Although I will admit hearing the crowd sing the song before the end of the game when you’re well up was a nice little touch of hubris.

Moreover, when it comes to the crowd there are some wild inconsistencies that go beyond fans singing the wrong chants. Often the away team will make up the bulk of the crowd, which if you’re playing the Gold Coast at the MCG and the stadium is packed with 75% Gold Coast fans then it certainly raises the eyebrows.

At the end of the day I am just thankful we have a new AFL game to play. It may not be the AAA AFL experience a lot of fans were hoping for, but it’s a good enough adaptation to tide you over while the real thing is on hiatus. In saying that, there’s plenty of work Wicked Witch needs to do in regards to bug fixes and tweaks to get the game firing on all cylinders. But there’s enough here that should scratch avid footy fans’ itch.

Reviewed on Xbox One X //  Review code supplied by publisher 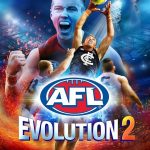 AFL Evolution 2 Review
Green Shoots
Despite needing some fine-tuning, AFL Evolution 2 is an improvement in every facet and the best modern take on AFL yet.
The Good
Improved gameplay mechanics
Visuals have received a nice upgrade
Robust creation tools
Great selection of teams and modes
A godsend with the season proper on hiatus
The Bad
Everything crowd related
Marking is still frustrating
Choppy and out of place commentary
Still some bugs quashing and fine-tuning needed
6.5
Has A Crack

AFL Evolution 2 Review
Green Shoots
Despite needing some fine-tuning, AFL Evolution 2 is an improvement in every facet and the best modern take on AFL yet.
The Good
Improved gameplay mechanics
Visuals have received a nice upgrade
Robust creation tools
Great selection of teams and modes
A godsend with the season proper on hiatus
The Bad
Everything crowd related
Marking is still frustrating
Choppy and out of place commentary
Still some bugs quashing and fine-tuning needed
6.5
Has A Crack
In this article:AFL, afl evolution 2, green shoots, JSOS baby, Patrick Cripps, tru blu entertainment, Wicked Witch