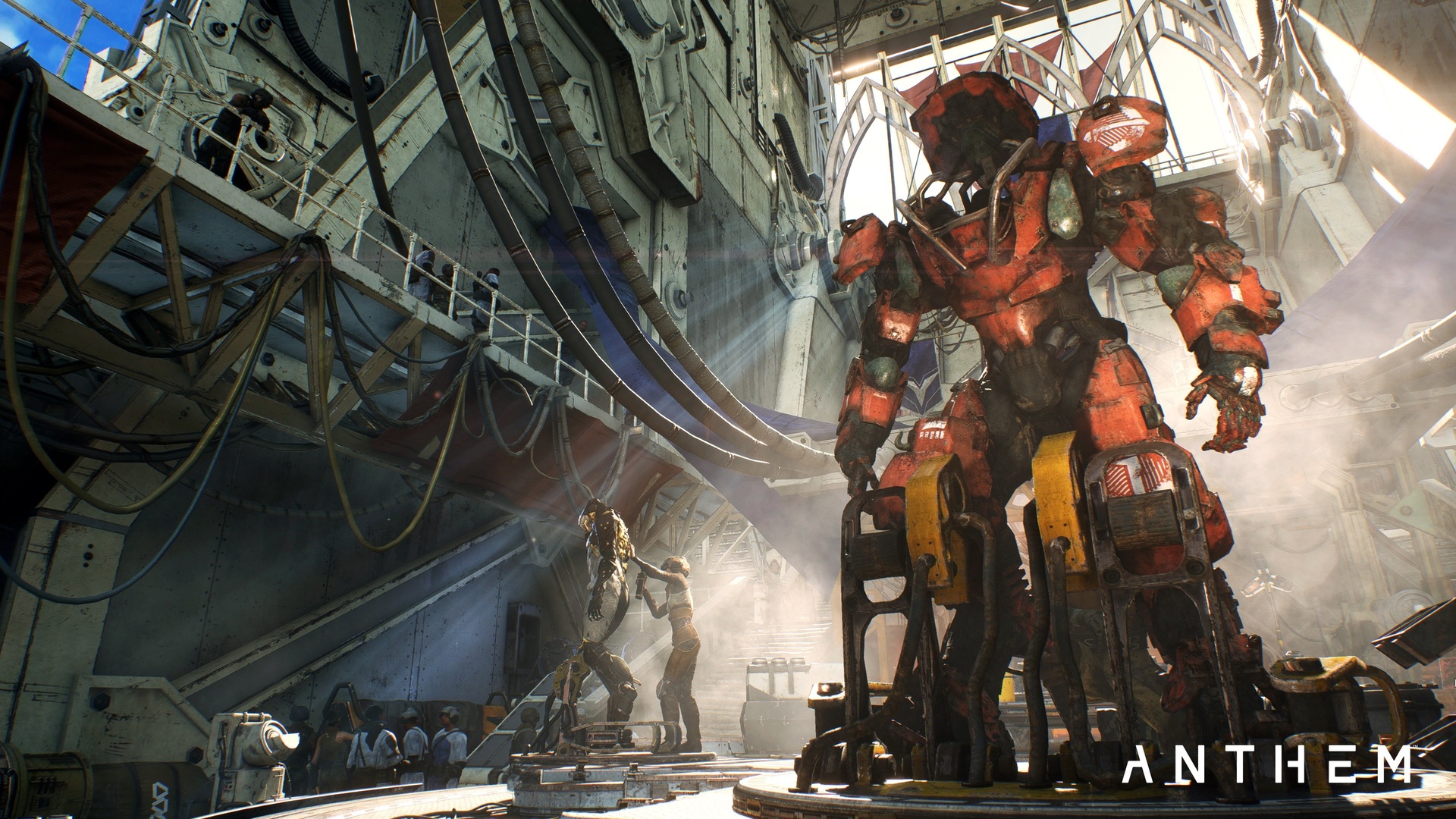 So I spent the long weekend playing (or at least attempting to play) the VIP demo for BioWare’s upcoming shared-world shooter Anthem. While I mainly avoided the server-side issues (some people could not even connect to the game), the demo was far from perfect, but it was at least functioned enough for me to get a feel for what Anthem actually is. Many are probably wondering, is it just third-person Destiny? They certainly have their similarities, but Anthem does distinguish itself is with some distinct differences.

We’ll start with how the game presents its story. Now I am not going to lie, I didn’t pay as much attention to the small portion of the story that was available during the demo as I should have, but I was still able to garner that Anthem is going for more of a direct story, allowing you to interact or live the cutscenes rather than be pulled out of the immersion to see a prerendered cutscene. This move allows for some quirky, yet intimate moments as you really feel like you are a part of the world, which is key to a game where you are an unnamed-but-essential character.  Anthem also does a better job than other shared-world games at making identifiable and memorable characters. During the demo, you are mainly engaged with one character, Matthias. He’s an average character to begin with, but when some additional cast comes into play he bounced off the others to create some quirky dialogue.

Now after the small story content there was a stronghold to do. This is where Anthem shone its brightest. The easiest comparison to make when it comes to the strongholds is to Destiny’s Strikes, though with a little more thought put into them. The stronghold available was called the Tyrant Mine and while it was pretty fun, it was here that I realised that perhaps either the strength of certain enemies or their health pool needed to be reduced a little bit. It wasn’t very often that I felt like the enemies were teetering on the lines of being as spongey as an enemy in The Division, but with some of the enemies they basically absorbed the bullets and pinned me down before I felt I was actually being any form of threat to them. Not to mention that there were just way too many of them around, but that would be less of an issue if they didn’t take an eternity to die.

The only other issues I had with combat in Anthem arose very quickly. For starters, it throws enemies at you with the frequency and density of Warframe but gives you the same amount of ammo as Mass Effect, so you very quickly find yourself running completely out of ammo. Now in a game like Warframe that is okay because you can rely on your melee to carry you through the enemies until, but in Anthem your melee is practically useless. Firstly it doesn’t do anywhere near enough damage, it can’t even kill low-level enemies in one hit and to make matters worse you can’t very easily hit enemies repeatedly with your melee. It just isn’t viable. The last small thing that would make the combat great is crouching, especially since Anthem loves to place small bits of cover that do nothing to make you increase your survivability.

Why yes, I am very good at this game

Now I know what you are thinking, “What’s the general gameplay like? Especially the flying.” Anthem’s general gameplay is actually fairly well designed. The weight of the Javelins (basically your class) takes a little bit to get used to, especially since each Javelin moves very differently. The demo starts you with the Ranger, but after hitting level 12 I was able to choose one of the other Javelins. I chose Storm because I love mages in other games, so why wouldn’t I love it here? I can’t really say for the other classes as I’ve only played with Storm and Ranger, but the flying felt like it made the most sense with Storm as aerial combat was much more of a thing here (you can expect me to write an article about all four when the open demo comes around as people who were a part of the VIP demo can use all four Javelins). Casting lightning, freezing enemies and setting them alight is definitely how I felt Anthem was at its best. Storm allowed me to play both aggressively and defensively, which is just my style.

With the Javelins, you can customise them whenever you are not in an expedition or in freeroam, which makes it more like Warframe in that sense – you need to commit to your loadout until the activity is over. You can use gear to change your abilities, like how I could either have a regular grenade or a sticky grenade with Ranger, and the strength of your abilities and weapons determine your overall power level. How this metric plays out in terms of progression will kind of remain to be seen until the full game is released as the content available within the demo is not indicative of how Anthem handles power climb.

Now the game sounds all well and good, but the demo was anything but. My time playing the demo was filled with frustration and face-palming as simple issues which should not exist were prevalent within the demo. But before I go on, let’s clear something. This was not named a closed beta or something along the lines, it was named a VIP Demo, which would mean that they are demoing a finished product in the hopes that the demo would encourage more people to support their product. If a demo is released in a buggy, unpolished state, how does that reflect the final product? Most of my 8 or so hours in the ‘small’ demo (took 47GB on my PC) were spent trying to get past the bloody infinite loading screen or trying to make Origin to stop being so dumb when exiting the game (it would put the Anthem Demo process within the Origin container and make it use exponentially more CPU power). The former is something that plagued virtually everyone across every platform and it seems that the only workaround was to quit the game during the loading screen, immediately relaunch and then accept the prompt when it asks if you want to be put back into the game you were in when you quit. Only then would you actually load into a game, even when playing privately.

Anthem is riddled with bugs

Speaking of playing privately, the Anthem Demo was so very close to getting matchmaking correct. In Anthem you can elect to either play privately or publicly across all the activities, or so it seemed. The only activities that the game allowed me to play privately were the story activities. Strongholds and freeroam were held hostage to public matchmaking, which was annoying. If I want to play alone, let me play alone. This wasn’t even a matter of if you had no people then you would be forced into public matchmaking, when me and my group of friends went into the Tyrant Mine stronghold we were still forced to use public matchmaking which meant that if anyone got disconnected due to the demo’s crappy servers they would run the risk of having their spot taken. Warframe gets this right by allowing you to be as social or as introverted as you would like, I really do hope that BioWare change the matchmaking to be more like this.

It’s safe to assume that using DICE’s Frostbite 3 engine, Anthem looks great. BioWare’s artists have knocked it out of the park with some gorgeous environments and cool enemy designs. Thankfully Anthem does employ its art style to communicate the strengths and weaknesses of its enemies and when an enemy is tanky, it looks thematically appropriate for what the enemies are. In saying all of this, it was very evident that the game needed some serious optimisations made as my system could not even maintain above 60 frames per second in some of the larger scale open rendering areas at 1080p ultrawide (2560×1080). This wasn’t even at the max settings. I had most things set to medium or high, except for effects and post-processing which were set to low and didn’t make much of a discernible difference. Now my system isn’t exactly at the top end of the performance spectrum, but an R7 2700X and a 1080 Ti should be able to crush a game like this at 1080p. Hopefully, the full release (if not the open demo) features a little more polish and optimisation as it was really frustrating seeing the frames drop like that. For PC players that do want to see the graphics preset comparisons, there will be comparison sliders at the end of the article.

Overall, Anthem seemed to be an incredibly promising game whose first impressions were soured by an abundance of technical issues. I can guarantee that there were a number of players who decided that they were not going to get the full release of the game due to their bad experience with the demo, and I cannot really blame them. BioWare and EA messed up majorly with some crippling issues which reflect poorly on the game itself. Issues aside, I am keen to see what Anthem has to offer with the full release.

Medium
In this article:anthem, BioWare, EA, Load to nowhere, The Load less travelled