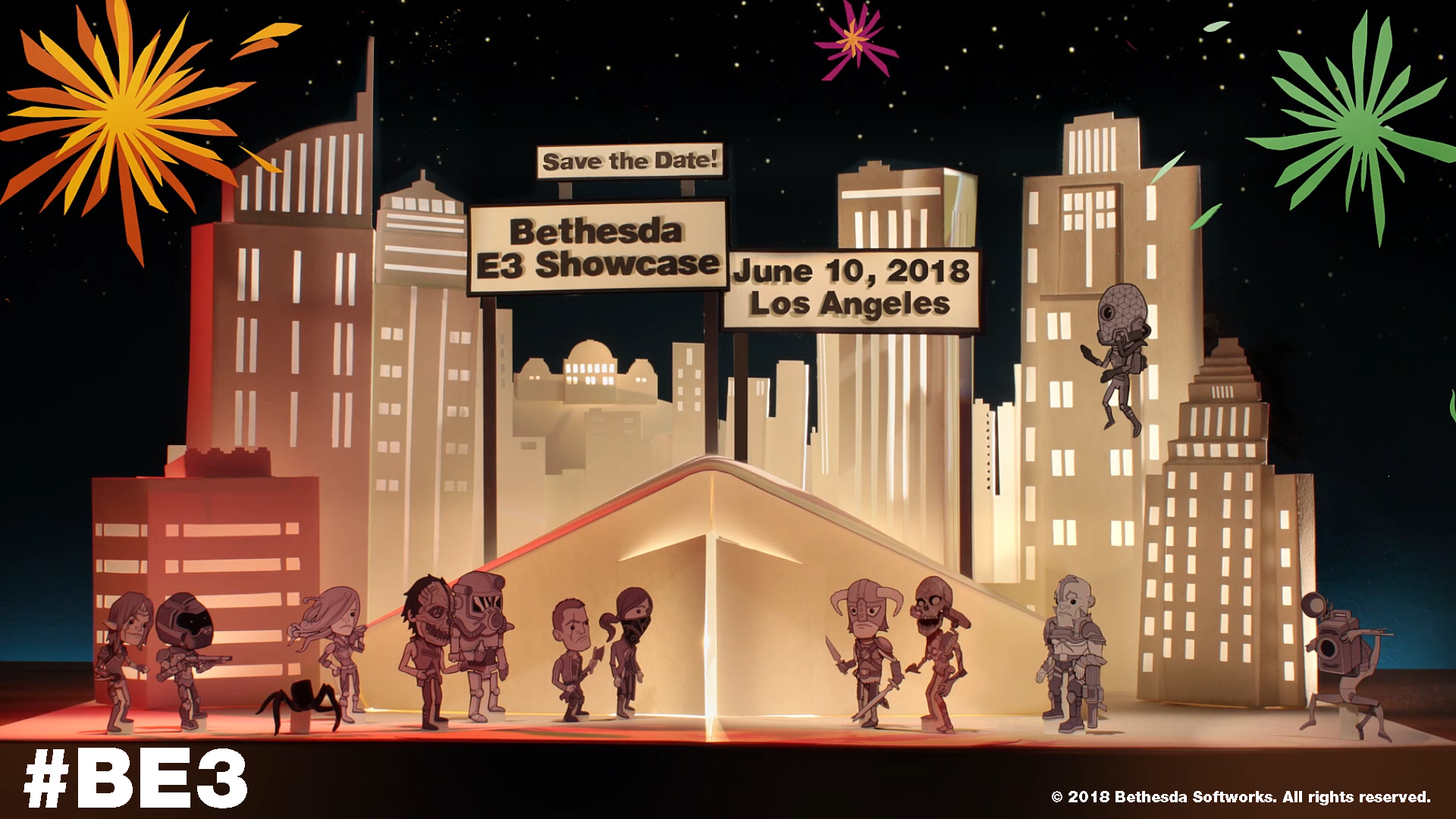 After a brief appearance at the earlier Microsoft showcase where we got a short look at Fallout 76, it was time for Bethesda to take centre stage and show us what they’ve been hiding in the vault aside from Fallout 76 and Rage 2. Bethesda’s show kicked off with a feelgood video about the company’s desire to create the dream. VP Pete Hines then took to the stage with a short spiel about Bethesda’s E3 2018 ‘create’ theme and 2017 offerings before giving a not-so-subtle backhand to Walmart Canada for leaking Rage 2 ahead of schedule. The Rage wasteland is where our 2018 Bethesda E3 journey started.

The previously announced sequel to 2010’s Rage was the first cab off the rank, with Andrew W.K. performing his song Ready To Die to mark the occasion. We then were greeted by a member of id Software and Avalanche Studios, who were culprits of one of E3’s most cringy and awkward moments, with the little American pointing to the hulking Scandinavian developer as he declared that Avalanche Studios delivered ‘big time’ with Rage 2. We then got an extensive look at the game’s open-world madness, which looks like an amalgam of Doom and Mad Max, thus giving Editor-in-Chief Kieran Stockton very tight jorts. It has a release date of Autumn 2019, and the hype is very real.

Up next was Elder Scrolls Legends, a free-to-play card game that is heading to PS4, Xbox One and Nintendo Switch later this year. It was announced that progress earned from both PC and mobile will carry over to the console versions via your Bethesda account. A rather tame follow-up to Rage 2.

Then it was Elder Scrolls Online‘s turn to pump its wheels up with the announcement that more content will be available later this year.

Having been rumoured for a while, we finally got confirmation that a sequel to DOOM, titled DOOM Eternal is in development from id Software thanks to a short teaser trailer. A full reveal will happen at Quakecon later this year.

Quake Champions was paraded around next, with the game’s community manager peddling the game’s eSports potential alongside revealing the inclusion of a bunch of new features. It was also announced that the game’s free-to-play trial would be available to download for the duration of this week and that those who do download the trial will have access to the game after the trial expires.

Members of Arkane Studios were up next and revealed a host of new content for their sci-fi first-person shooter Prey. There will be new a mode called Mooncrash, which is a roguelike mode that will see players assume the role of a hacker named Peter who investigates a TranStar base whose communications have ceased. Peter will need to uncover the base’s secrets if he is to survive. The mode’s loot and objectives will change each time you play, and the deeper you go the better the rewards will be.

Arkane also announced that there will be a free update for all owners of Prey, which will bring the much-requested New Game + mode, a Story Mode that will allow players to enjoy the game’s story, and Survival Mode, which ups the challenge with oxygen levels and more. Furthermore, it was revealed that a multiplayer mode is in the works. Called Typhon Mode, five players will hunt another human-controlled survivor as Mimics, using the game’s environment to their advantage.

It was then MachineGames’ turn to make an appearance to announce two new entries in their Wolfenstein universe, with one being a shorter spinoff titled The Young Blood and a VR title called Cyberpilot. Youngblood is set in 1980s Nazi-occupied Paris and will see players take the role of BJ Blazkowicz’s twin daughters, Jessica and Sophia, as BJ himself has gone missing. In a game that will be playable in solo play or co-op, Jessica and Sophia will uphold the Blazkowicz family tradition of killing Nazis and liberating the world. It will launch in 2019.

Cyberpilot will give VR owners the opportunity to join the Nazi-slaughtering party, with resistance fighters commandeering Nazi war machines for their own revolution use.

In a lighter moment, Skyrim and Fallout figurehead Todd Howard cashed in on the running joke that Skyrim would be announced for practically anything. In a hilarious pisstake, Bethesda showed a video of Skyrim running on Amazon’s Alexa device, Etch-A-Sketch, Motorola pagers and the Samsung smart refrigerator. It’s good to see the company can make fun of itself and not take itself too seriously.

Bethesda’s biggest focus was Fallout 76, the newest entry in the Fallout universe which will be an online-only MMO experience. Fallout 76 will be the earliest game in the Fallout timeline, with players playing as a survivor from the famous vault 76 in West Virginia a mere twenty years after the events that lead everyone heading underground. It’s the first time multiplayer has come to the famous series and players will be able to experience the online wasteland in groups or by themselves. Todd Howard also confirmed that no matter which server you play on or who you play with, your progression will carry over. A beta was announced (no date), and it was revealed that the game will release on November 14 for PS4, Xbox One and PC. Furthermore, a collector’s edition of the game was announced with a full-blown wearable T-51 Power Armor helmet.

Elder Scrolls Blades was then announced for iOS and Android systems and is a roguelike first-person RPG that will feature procedurally generated dungeons, town building as well as a 1v1 mode. Not the most exciting announcement, but one that mobile gamers and fans of Elder Scrolls will be excited about.

Bethesda was always going to end with a bang, and with a bang they did. Not only did fans get what they’ve been begging for years with an official announcement that Elder Scrolls VI is in development, but we finally got confirmation that Starfield is indeed a real thing. Nothing was revealed about either project, apart from that Starfield is a brand new IP and that we won’t see either title until the next-generation of consoles.