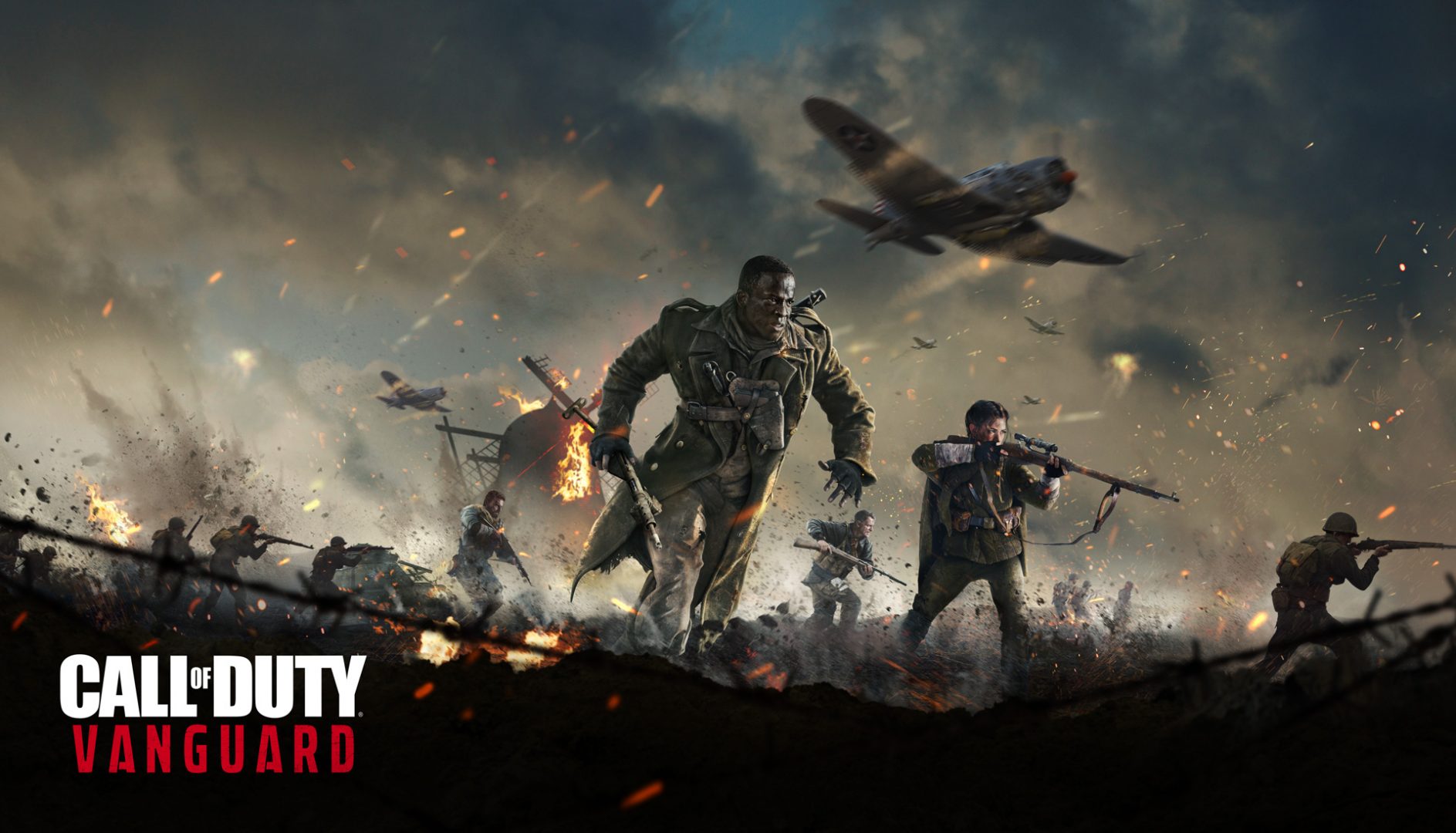 This year’s Call of Duty takes us back to the familiar theatre of WWII, with reports that the developers are going with an alternate history take that will allow them some creative freedoms to tell new stories in a well-trodden setting. We got to sit down with Senior Development Director Adam Iscove and Lead Designer Zach Hodgson to talk about what all this means for the multiplayer side of things, and what they’re bringing to the table to keep the series fresh.

WellPlayed: Call of Duty is well known for its yearly iterations you can almost set your watch by. What’s Vanguard’s unique multiplayer hook that sets it apart from the titles that have preceded it?

Adam Iscove: I’d say the gameplay itself and the innovation that we’ve put into multiplayer with things like tactical destruction or the dynamic mounting and blind fire system. The way you can progress an Operator, the look of the game is different from any other game that has come out in recent years.

Zach Hodgson: I think it’s going to end up being a bit of a personal question for anybody that plays because what we focused on more than almost anything else is just giving players options. For example, what combat pacing do they want? How do they want to build up their guns? We are giving them lots of different tools. We’ve tried to even make the default attachment for barrels competitive. If you want to go with default barrel, do it if that’s the way that you want to play. We’ve offered things like, do you want to solve a problem with silencers or subsonic ammo? Choose one of those and you’ll solve that issue for you, for whatever your build is. We’ve tried really hard to keep the combat high intensity and scale properly.

ZH: One of the big things that we ran into early on when we started pushing match intensity were things like if you don’t have an extended mag, or if we push time to kill too high, it ends up feeling like you can’t take those multi kills, as in you can’t actually do them. And so we tuned the game so that that was possible, so that everything kind of scales. We have a lot of really cool setups, some of which are hidden behind the level 30 cap, that there are a lot of combinations of equipment, field upgrades, perks, and gun perks that make for some very unique builds to Vanguard and they change the way that you play enough that you’ll feel like it’s a step ahead of the preceding games.

AI: We also have 20 maps at launch, 10 attachments in our gunsmith so there’s just so much variety for the player this time around. It’s really exciting to put this content out into the world and see people enjoy every last little bit of it.

WP: Vanguard has been described as exploring an alternate history slant to WWII. What creative freedoms has this allowed in developing unique weapons for multiplayer? We all love M1 Garands, but once you’ve heard the clip ejection ‘ching’ of one you’ve kind of heard them all. How experimental does your alt-history setting allow you to get with Vanguard’s multiplayer arsenal?

AI: For me it’s about the attachment system. For example, the M1 Garand, we’ve played that weapon before, but this time, with some of the optics that you can equip on it, for me, it feels very different. For me, it feels somewhere between like an assault rifle and a sniper and I actually, I never really enjoyed playing with the Garand in previous games, but this time I really like the feel of it. I like the amount of damage it does and I feel like I do really well when I take that into matches. So that for me is something that definitely feels fun and unique and different that we are taking creative choices to make sure are part of our game.

ZH: For a lot of us, we really love this concept of these original special forces tailoring their guns to be exactly what they wanted. If they needed something for a mission, it wasn’t like they were going to say, “Oh, I can only take five attachments. That’s all I can do.” They would load it up or saw off the barrel or put a special type of ammunition in it. And we just tried to think a lot about what they would do, what you would want to do if you were in that position, you wouldn’t pull a punch, you would make the perfect gun. And that led us to a lot of different decisions, like being able to have one slot that had a huge effect on the gun in terms of changing it from being more like an LMG to an SMG with just one slot choice.

But allowing that to be fair because the slots aren’t competing with each other anymore, and some of the coolest gun builds that we’ve come up with aren’t things that we even expected to be there when we first started but it’s been really exciting to see, do you put on one attachment that takes the gun to kind of a faster, but not as lethal direction and then you try to make up for that with some of the other attachments, or do you go all the way in one direction where you’re making the heaviest slowest, but least recoil and most long ranged version of a gun?

We kind of described it internally as like they have access to the best machine shop, almost like an Iron Man’s dad in the background. But it’s not necessarily alternate history it’s just that it’s heavily inspired from the optics from airplanes, from ship mounted weapons systems of the time period, and we try to make those available to these special forces team members.

WP: What sort of classic COD maps are we likely to see return. Perhaps Terminal re-imagined as a WWII hangar? Everybody loves Terminal and I swear it has found its way in to most COD titles over the past decade.

AI: I don’t think we’re going to give anything away other than what we’ve already announced, but we talked about some of our launch maps. So like we mentioned, Castle and Dome from World at War coming back. And then I think we’ll just have to tell players to tune into the seasons and expect the unexpected.

ZH: Maps like Castle really hit the feel that we wanted to go for both in the time period, but also because when we first started, we wanted to get some maps in there that had the World at War style feel.

WP: You’ve spoken about Vanguard having enhanced destruction. What’s the extent of this and how can I use it strategically to my advantage? Can I finally bring that house with a camper in it crashing down around their ears?

AI: The destruction in our game is intended to be tactical, so you can blow a hole in a wall and open up new paths to the map that didn’t exist previously or sight lines. That’s how the destruction is meant to be used tactically. And then just visually it’s just meant to be immersive to make you really feel like you’re interacting with the environment in a way that you’ve never been able to in the past.

ZH: There’s two things going on. One is how you can interact with the destruction. So we have some things that are more like tiled glass, we have pieces that are more ablative like the bar in Hotel Royal, the top part of it gets blown off as you firefight in that area. And we have the walls where you can knock out one small board and kind of peek through it, or you can open up a big hole, you can just run right through it. There’s lots of ways to interact with those walls and you’re doing it as a tactical choice. Am I peeking or am I busting right through? The other part of the distraction is how we utilize it in the maps and just as a small hint, we are pushing it more and more as we go along. So the maps that are upcoming and some of the maps that players haven’t seen yet bring a lot more destruction and destructible elements than even the ones we’ve shown off so far.

The destruction in our game is intended to be tactical, so you can blow a hole in a wall and open up new paths to the map that didn’t exist previously

WP: What major improvements to Champion Hill will be made based on the feedback from the alpha? I did note that the gun upgrades (while awesome) didn’t really explain exactly what they did, and couldn’t be viewed in any menu I could find. Will this change?

ZH: We’ve had a few ideas about it. I don’t think we have anything that we can totally talk about because it’s fairly early days still in terms of what the next step for Champion Hill is.

AI: But also some improvements from the alpha have been in terms of visibility. Some of the spawning issues have been addressed, and more on the bug fixing side of the game. And then, moving forward, there will be some design, alternative things that we’re going to try so you’ll have to stay tuned for those.

ZH: I think the biggest thing that we can lean on there is, is just that Champion Hill is a limited set mode. You have a limited set of weapons of attachments because the upgrade path is preset, but on our side, we determine those and we’re trying to set them up to be as interesting as possible for the users. The set that they played in the alpha was kind of split between these two groups, but they were very much linear progression gun upgrades. We can make much more diverse sets of guns to go into other versions of Champion Hill and it will completely change the way that it plays out. So there’s a lot of power there in terms of just limiting the set and providing cool options that are fun to fight against and to choose across your team.

So there you have it, folks. So many questions answered, yet so many more left unanswered. Will I get a bullet-for-bullet reincarnation of my beloved Extended Mag Rapid Fire PP90 with Steady Aim for maximum scrub value? Will they keep that spawn on Courtyard where you’re looking directly at the enemy at the start of the match? Luckily the game releases November 5th, so we won’t have to wait long to get our burning questions answered.

In this article:Activision-Blizzard, Call of Duty, Sledgehammer Games, vanguard