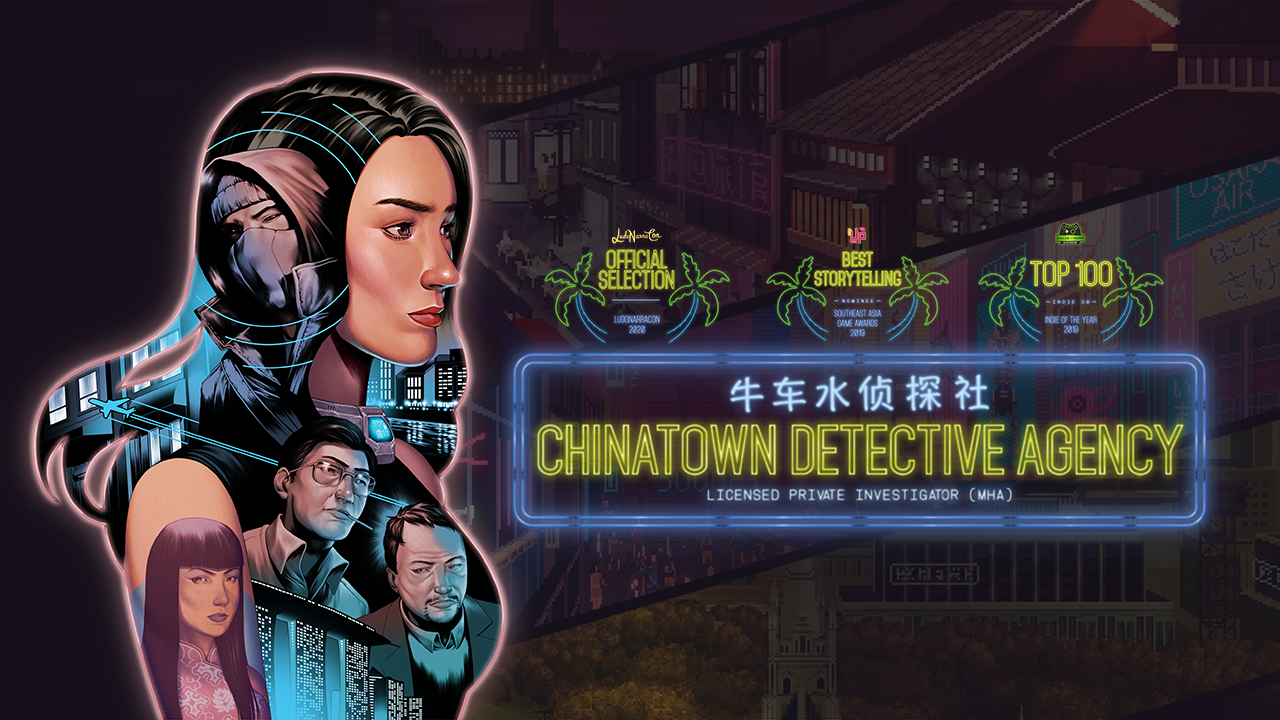 Cyberpunk is pretty in right now. It only makes sense, considering that it resembles reality more every day. Our smartphones are watching our every move, streets are lined with cameras, and machines consume increasing amounts of labour. Cyberpunk is, therefore, in a bit of a weird spot right now. When science-fiction becomes science fact, how do you write stories in these universes? How will these stories change? Will they become more popular, or slowly die out? It’s times like this that you need a detective.

Luckily, one thing that’ll never change is the intuition of a hard-boiled private investigator. Chinatown Detective Agency, a crowdsourced point-and-click adventure game from General Interactive Co., is a game about that very sort of person in a very cyberpunk place. Amira Darma is an ex-cop who’s opened a detective agency in near-future Singapore, and she’s your playable character for today. In Chinatown Detective Agency, you’ll explore various parts of the world and gather clues to solve cases – from your real-world smartphone.

“The game is, at its very core, an homage to the classic Carmen Sandiego games,” creative director Mark Fillon tells me. “We don’t get a lot of games that require you to actually look at a map or consult an encyclopedia or a book.”

It’s an interesting idea and one with plenty of potential. In my time with the Alpha demo (available on itch.io), there was one puzzle that showed off how neat this mechanic is…but also how easy it could be to break a game’s immersion. The gimmick could wear off very quickly, and constant intrusions from the outside world – Facebook notifications, for example, could rip the player right out of the experience. This doesn’t scare the team at General Interactive Co., though, as Fillon skillfully brushes away my concerns:

“I’d argue that getting you to do the real investigating imparts a special kind of immersion to the game,” he says. “That the mysteries and the clues feel real because they point towards something in the real world that actually exists.”

“It’s certainly an unconventional way of looking at game design, but we’re all about that – we love mechanics that feel unusual.”

It’s not like the rest of Chinatown Detective Agency is slouching in the immersion department, either. Amira will require constant attention to her needs; food and sleep are essential to her performance – and yours. The game’s gorgeous pixel art, by Ricardo Juchem, is unlike any pixel art I’ve seen before and I’ve seen a lot of pixel art. I’m sure that I’m not the only one who’s getting fatigued with the style, but Juchem’s art makes the game truly come alive. As Fillon points out, it’s all in the lighting.

“Just like the game,” Fillon continues, “[Juchem] loves to use unconventional methods and break the ‘traditional rules’ of pixel art. He uses a lot of post-processing that adds an ethereal layer to the base art. The way the neon lights radiate and the glow of holographic light – these are all signature Ricardo Juchem touches.”

I mean, just look at this

Juchem’s art brings life to a wide variety of locales across the globe. In true Carmen Sandiego fashion, the demo included Singapore and London, but there are many more to come – including Perth! No, it’s okay, I know you never think about us. But Fillon does! He’s a good boy. “Sure, most people prefer Melbourne and Sydney,”he explains, “or the cities of the eastern coast. Me, I’m a Perth guy. I love the open spaces, the amazing weather, the vineyards, the roadtrips to the small towns.” But before you give a ‘hell yeah’ like you should be doing, Fillon has a catch for his objectively good taste in cities:

“I’m thinking of portraying Perth in a more depressing light (as I do with the other cities). Maybe the mining industry has collapsed and the city has turned into a sort of Detroit after its factories closed down.”

That connection to the real world is paramount to the game’s aesthetic and narrative. Puzzles will almost always keep that connection strong, with references to classical literature and modern art. Couple that with the interesting smartphone mechanic and you have a gameplay loop that could prove fruitful. In fact Chinatown Detective Agency, Fillon says, is more inspired by the real world than that of fiction.

The art of Chinatown Detective Agency is accompanied by some sleek dialogue andalso uses its writing to plant branching paths for the player to cross. While this isn’t seen very prominently in the demo, it’s promised in the final game. The dialogue, meanwhile, is trim and to the point, which I appreciate from any piece of art. There’s no fluffing about with a word machine, just slim sentences that sound like they came from real people. It’s also voice acted by natives of Singapore, to get that ‘Singlese’ accent just right. Fillon assures me that this is no coincidence.

“I wanted to do right by the local culture and nuances of Singapore, and that meant trying my best to incorporate as much colloquial language as I could, “he says, “and it’s not really something a non-Singaporean can pull off acting wise.”

As the game’s development continues, Fillon explains, a more diverse cast will come to light, especially for other parts of the world. “As long as it’s done tastefully and doesn’t feel forced, I think that should be the guiding light.”

I’d like to take this opportunity to point out Amira’s dress x boots outfit. Bitchin’

Accompanying the external research mechanic and the visual and written art is another odd choice for a point-and-click adventure game: action scenes! Occasionally, Amira will be forced into shootouts that break up the gameplay loop in a dynamic way. While only one shootout was in the demo, it was a great way to end it. For Fillon, this is all part of his quest to make Chinatown Detective Agency a more “mature” version of the classic Carmen Sandiego games:

“I wanted the content of the game to be for mature audiences,so throwing Amira into sticky situations that might require violence was, I felt, appropriate.”

“I like to imagine that the people who played those classic [Carmen Sandiego] games have now grown up – they’ve seen their Tarantino films, and their gritty Japanese animes and read their dystopian sci-fi novels.”

Finally, creative director Mark Fillon leaves me with some wisdom he learned from the development of General Interactive Co.’s previous game, 2017’s Terroir:

“You can’t please everyone, and you shouldn’t try to. You’ve got to do your best to do what you think your players will like most, and if you find yourself lost, trust yourself and go with your gut.”

In these increasingly cyberpunk times, your gut is probably the thing you can trust the most. As Amira Darma, it’s your greatest weapon. At any rate, Chinatown Detective Agency is shaping up to be one of the best indie games of 2020. Its Kickstarter has been funded with some stretch goals being fulfilled, and the demo is also available on Steam.

Cyberpunk Detective Agency is planned for release on Windows and Macintosh through Steam, GOG and Humble, and to Nintendo Switch, in “Winter 2020/2021”.