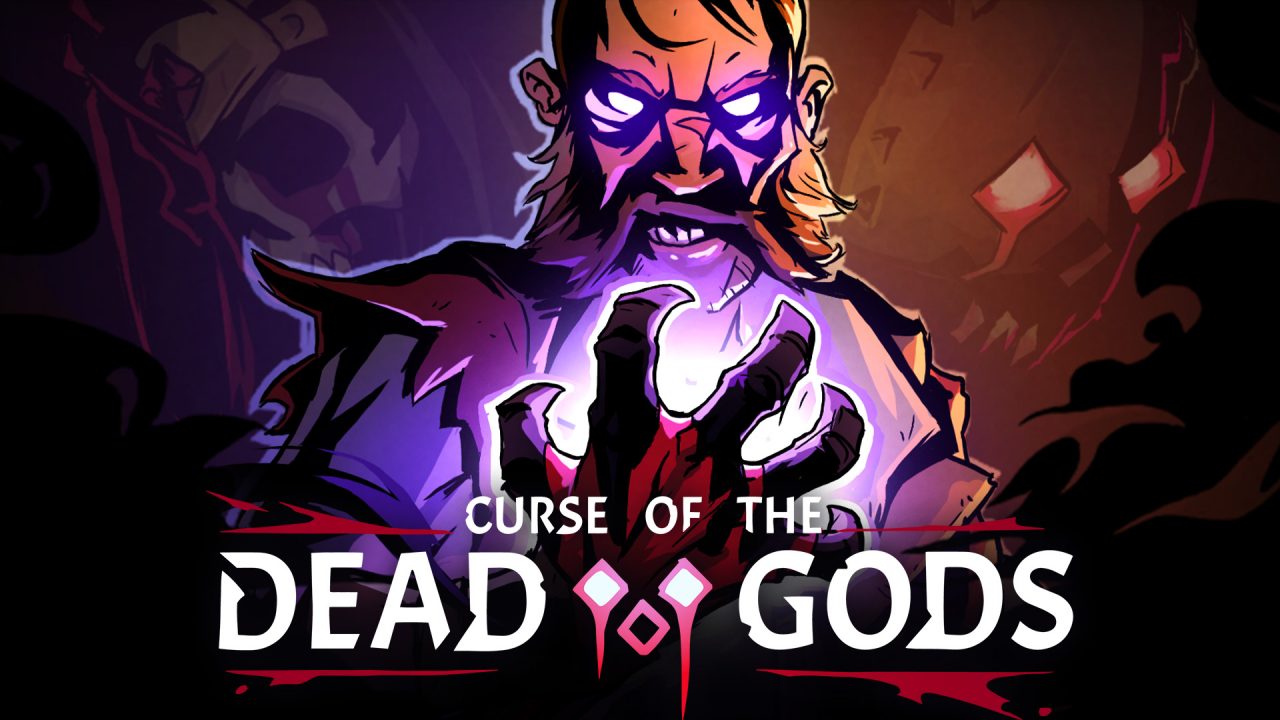 Roguelikes and roguelites have seen another surge of popularity lately, largely thanks to Supergiant’s massively popular Hades. With a huge amount of games in the genre already on the market, it may feel like all of the good ideas and innovations have already been snatched up and that any subsequent entries will feel like hollow imitations. Hades has already proven that there’s plenty left to explore in the space and newcomer to the party, Curse of the Dead Gods, further pushes that. With weighty combat, a great art style and a number of engaging mechanics that add a fascinating layer of strategy, this is a roguelite that will be enjoyed by newcomers and veterans alike.

A beautifully bearded explorer with visions of gold and glory makes his way into the depths of an ancient temple, only to be sealed away inside and cursed by death himself for his greed-riddled thoughts, forced to adventure into the depths of the temple in search of an escape. With the stage set, you take control of this intrepid fellow and make your way further into the temple in search of egress.

Get used to this door, you’ll be seeing a whole lot of it

That won’t be easy though, as this Mesoamerican temple is stacked from floor to ceiling with traps and monsters that want nothing more than to cut your spelunking short. Masked undead will violently swipe at you, serpentine archers will litter you with arrows, fleshy monstrosities will pound you into the ground and spectral sorceresses will conjure spells to tear you apart from the inside, but don’t worry, you’re far from defenceless. Armed with a torch to light the way and a varied collection of main, off-hand and heavy weapons, you can take the fight right back to those beautifully designed dangers, all before you’re inevitably ripped apart.

The flow of combat is dependent on what weapons you use during your run and how you like to play. If you’re kitted out with throwing daggers and bow your encounters will be vastly different than if you were rocking a mace and pistol. Each weapon has its pros and cons and it’ll be up to you to find which loadouts suit your playstyle. Regardless of what you’re armed with, you’re able to string together combos, dodge and parry enemy attacks by using stamina points (of which you start with only five). This system forces you to make decisions on the fly and adapt to your situation, as constant dodge rolling will eventually find you on the pointy end of a pike. Each weapon can be charged for added damage and effect, but will also chew away at those stamina points. Experimenting with different weapon combinations is excellent and when that perfect mix finally finds you, you’ll feel unstoppable. Combat as a whole feels amazing, but when there are a few dozen enemies on screen at once you can get lost pretty easily. Every enemy has a prompt before they attack, allowing you time to react, but that becomes impossible to see when there’s so much going on. That and every time you get hit, whether it be for one damage or 60, the screen violently reacts which can be distracting. These are fairly minor complaints though and you’ll find yourself getting hit a lot less once you master parries and dodging.

She’s tough, but this witch isn’t tough enough to keep me down

An added component to combat and exploration is darkness. When you’re in the dark you’ll take added damage from enemies and you won’t be able to see traps like floor spikes and flame-spewing statues that are found throughout the temple. Luckily your trusty torch can cut through the blackness, but fighting will extinguish the flame, so light sconces and braziers around the place are your best course of action. This adds another layer to every encounter; should you run past the enemies to brighten the area, or get the drop on the group of baddies and deal some damage that you otherwise might not? It’s a risk versus reward scenario that you’ll be confronted with constantly and it’s a great mechanic that forces you to strategise.

That’s not the only strategic element you’ll come across either, as you’ll also have to keep tabs on curses that will be inflicted upon you the further you progress. A bar at the bottom of the screen tracks how corrupted you are and when the bar hits 100 you’ll be stuck with a game-altering curse when you progress to the following room. Your corruption will rise when hit by certain enemies, but it will always go up by 20 whenever you go through a door into the next room of the temple. Curses are double-edged and will change how you play the game, often in a very negative way, but they always come with a positive. For example, one curse has every light source extinguished when you take damage, meaning you’ll be vulnerable more often, but it also raises your damage output in the dark. The curses are randomised every time, so you’ll never be able to prepare fully, keeping your heart rate high as you try and survive until the boss room. You can be cursed five times in total, each stacking on the last, with the final curses making a successful run near-impossible. The first final curse I got saw my health deplete by five points every second, so you can imagine that I didn’t last long after that.

The looming threat of the curses is ever-present and adds a really thrilling spice to the gameplay loop, making sure that every run feels distinctly different. Proceeding through to another room doesn’t just raise your corruption level though, you’re also able to choose which path to take and what you’ll encounter. Each room has a benefit, whether that be an altar offering weapons, upgrades and buffs in exchange for gold or blood, or a combat-free healing room where you can gain some HP back in exchange for…blood. That sounds ominous because it is. You can choose to purchase most items in the temple with a blood sacrifice, which, you guessed it, raises your corruption. Every choice you make alters your run going forward and you’re constantly weighing up your options to give yourself the best chance at success which is daunting but in the best way.

If you make it to the end of a temple you’ll come up against one of the game’s numerous bosses. These fights are brutal, especially if you’re ill-equipped and riddled with curses. From a tiger-summoning hunter that throws deadly spears to a witch that scatters magical trip mines around the arena, there’s a good variety to these fights. I only encountered one true pain in the arse boss who possessed a slightly unfair attack, but overall they’re the right amount of challenge.

Choosing which path to take gets very stressful

You will die, that’s unavoidable. Luckily, each death will strengthen you thanks to two persisting currencies – Crystal Skulls and Jade Rings. The Skulls can be traded for permanent buffs that give you a leg up during runs, or they can be used to enhance the gear you start with, making the earlier rooms a bit easier. Jade Rings are mainly used to unlock more powerful weapons to appear within the temple, giving you something to strive for. This kind of progression might not be a new innovation to the genre but coupled with the other systems at play it certainly adds to the overall replayability.

Another thing that kept me coming back time after time was the presentation. The visuals are cartoon-like, almost cell-shaded in appearance, making every vibrant colour pop. The lighting is spectacular as well, complementing the torch mechanic and giving you another reason to spark it up even when it’s not necessary. The Mesoamerican influence gives the game a unique visual quality that I didn’t know that I wanted but seeing warrior statues and intricate paintwork adorn the walls of the temple made me wish that this aesthetic was used more often.

Roguelites live and die on their replayability. They either offer an engaging gameplay loop that begs you to play through ‘just one more run’, or they become boring and tedious after an hour. Curse of the Dead Gods packs in a number of excellent mechanics that all work together to create an experience that I can easily pick up and play for 20 minutes, or sit down and play for multiple hours. Layers of strategic thinking are needed to truly master this game and luckily the combat and visual stylings are more than enough to keep you interested until you do just that. 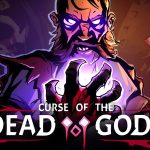 Curse Of The Dead Gods Review
More A Blessing Than A Curse
As visually striking as it is addictive, Curse of the Dead Gods blends together satisfying combat with a few unique mechanics, making for a roguelite that will eat away at your free time in a big way
The Good
Simple to grasp, hard to master combat
Curse and room mechanics add a great layer of strategy
Visual style is unique and looks superb
Progression hooks you in
Good amount of weapon and enemy variety
The Bad
Crowded combat can be frustrating
Certain bosses have cheap attacks
Damage indication is distracting
8.5
Get Around It

Curse Of The Dead Gods Review
More A Blessing Than A Curse
As visually striking as it is addictive, Curse of the Dead Gods blends together satisfying combat with a few unique mechanics, making for a roguelite that will eat away at your free time in a big way
The Good
Simple to grasp, hard to master combat
Curse and room mechanics add a great layer of strategy
Visual style is unique and looks superb
Progression hooks you in
Good amount of weapon and enemy variety
The Bad
Crowded combat can be frustrating
Certain bosses have cheap attacks
Damage indication is distracting
8.5
Get Around It
In this article:Curse of the Dead Gods, Focus Home Interactive, Microsoft, nintendo, PlayStation, ps4, PS5, roguelite, switch, Temple, xbox, Xbox One, Xbox Series X/S