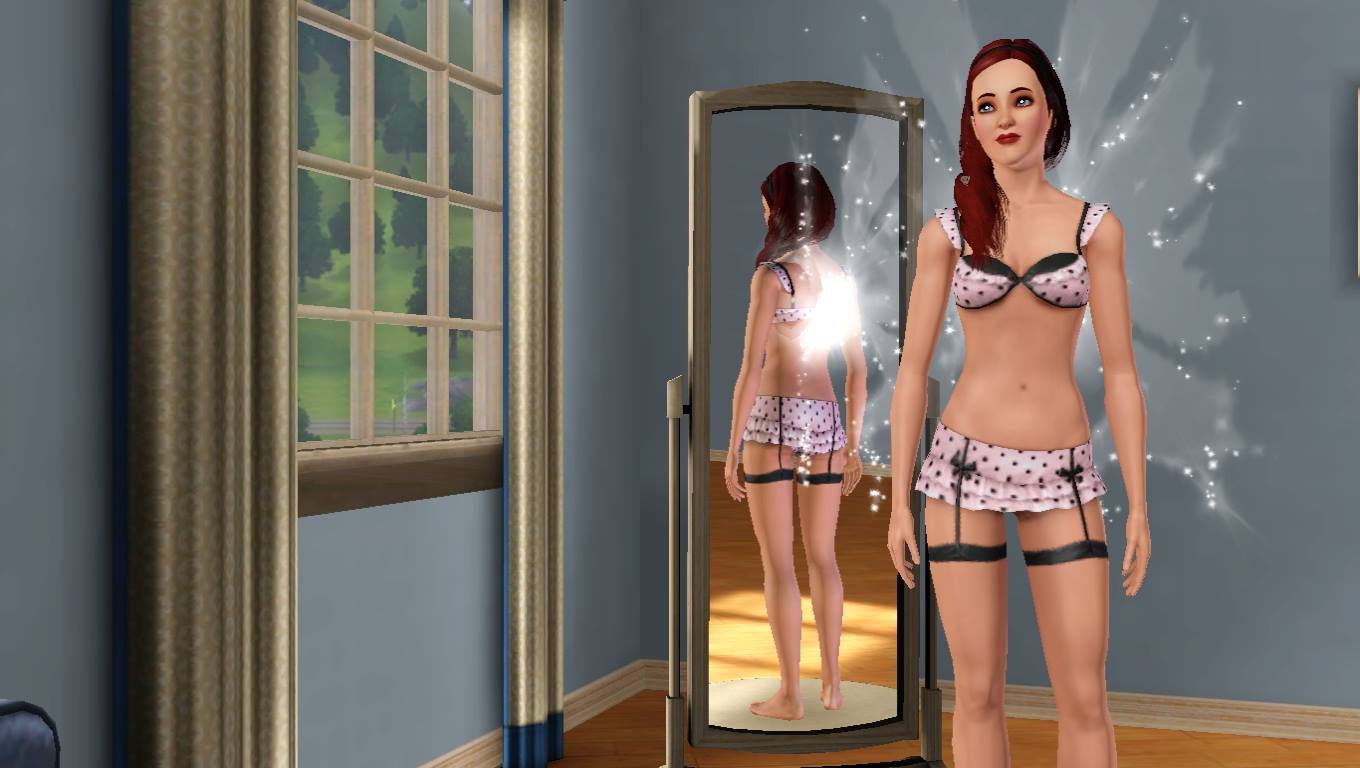 The world is the Late Night expansion for The Sims 3 and young Carrie sets out to continue her illustrious career as a top journalist and max out her 5 star celebrity rating. She has Simoleons in the bank, a penthouse apartment and thanks to the adjustable breast size option in The Sims 3, a great rack. In previous Sims games, for two Sims to ‘woohoo’ (read: bang) they have to be in love. In The Sims 3 they just need a basic ‘romantic interest’ from both Sims and then they can shag away. Delving into the nightlife and creating a name for herself, Carrie’s loose ways led to a steamy elevator session that landed her with twins and no baby Daddy. This is by far the most realistic simulation on reality I have ever seen from The Sims games, and I’ve played all of them. Sit back and listen to my (Carrie’s) story of The Sims 3 Deadbeat Dad.

Carrie was going out nearly every night, attending the hottest clubs, meeting fellow celebs and trying to befriend them in order to boost her celebrity status while maintaining her level 9 Journalist career. This went on for some time and eventually she grew tired (and so did I) of the hustle and bustle of city life. She, and I, felt it was time to settle down. So she started dating. Her number one mission was to find herself a suitable man that she could see herself having children with. 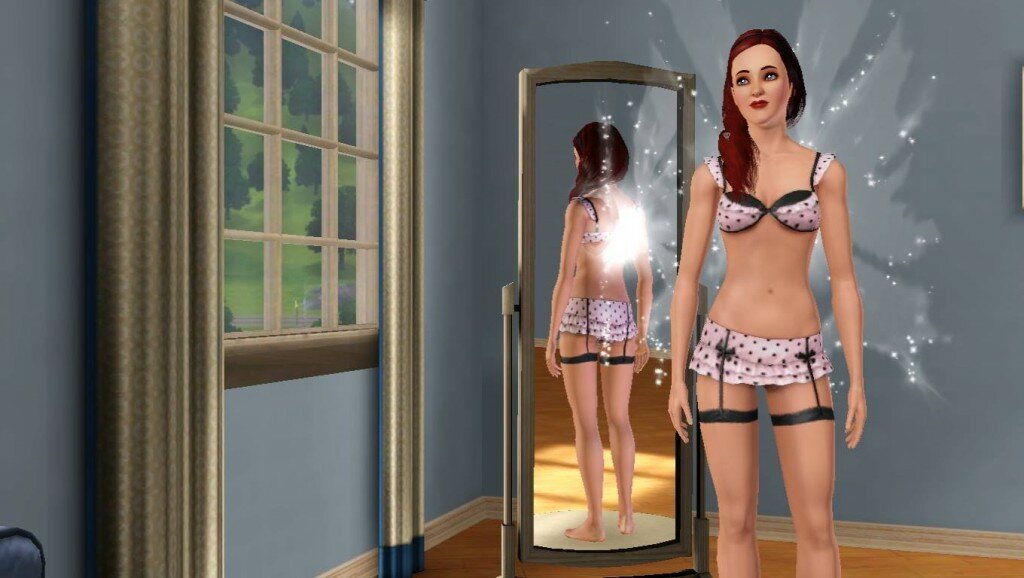 After making her way through some unsuccessful suitors, Carrie met Pablo Martinez, a young male who could often be seen wandering the city. Looking back I realise I never actually knew if he had a home that he went to, he was just around. To Carrie, Pablo seemed to be one of the more attractive men getting around, however to be honest Sim City is no buffet of Brad Pitts. As any woman who has spent many Sim days making her way through the men in the town would do, she finally said “that’ll do.” Operation: Get Knocked Up had begun. They began going on dates and even though they weren’t in love, there was an interest there. One day, as Carrie rode the elevator with Pablo to her apartment, she decided to throw caution to the wind and shag in the elevator in an attempt to make a baby. Success! Pablo’s wandering virtual sperm found Carrie’s level 9 journalist egg and Carrie fell pregnant instantly (as is Sim tradition). Carrie was excited and so was I. But Pablo? Not so much. Not to worry, plenty of Sims have fallen in love once a child comes along. Once our bundle of joy arrived Pablo would love me, and we’d get married and possibly make more babies and live happily ever after. Wrong. 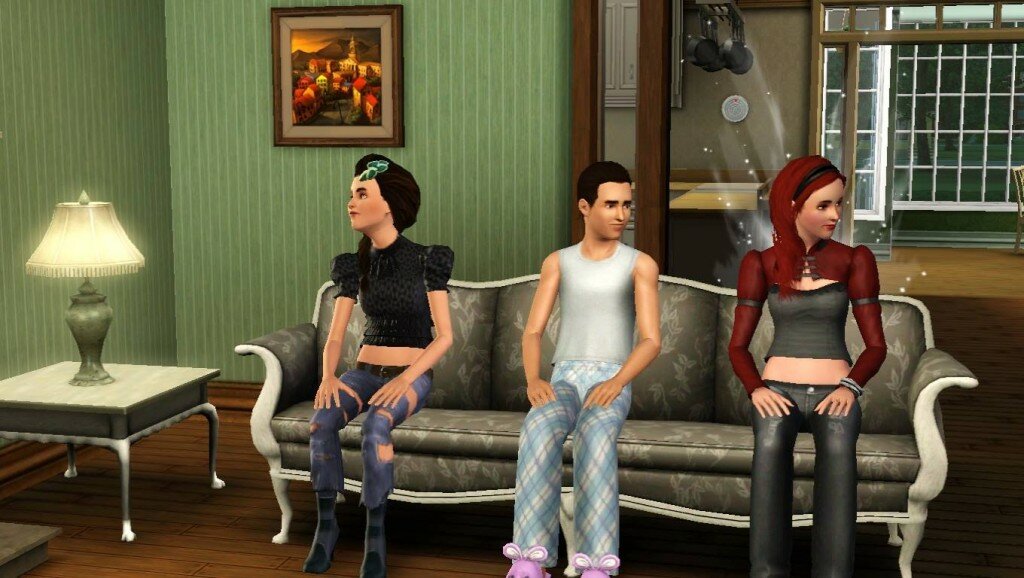 Despite the lack of a father the children are well-adjusted

Ever the strong independent woman, Carrie took herself to the hospital as the birth approached. Much to our surprise, after a typically short and painless Sims labour she had given birth to twins, a boy and a girl. Oliver and Primrose were delightful and filled the penthouse apartment with light and love, but they were also a handful. Carrie found herself hiring a butler to help around the house with the children. Carrie invited Pablo over to meet the children, but to her surprise he barely went near them. It was as if he was completely uninterested in the whole thing, even in Carrie. He made up some lame ass excuse and left. Ever the optimist, I thought to myself that tomorrow was another day, I’d try again then. Carrie skipped work to try and work on the relationship but to no avail. She called to invite Pablo over but kept getting the same cold response: “Call back in X amount of hours.” This went on for a few Sim days until FINALLY the bastard said yes he would come over only to call straight back and say, “Sorry, something just came up.” Seriously WTF? A few more days passed and I went to invite him over, and as I hovered over his icon I noticed that what was once a ‘romantic interest’ had now been demoted to an ‘acquaintance.’

I don’t make unattractive Sims OK. I make them schmick, crisp, an absolute fucking knock out. My Sim has over 200K in her bank, a penthouse apartment in the goddamn city, a great job and 4 celebrity stars. What the actual fuck is wrong with this guy? This nobody, this random on the street (who let’s face it might have been homeless) with no celebrity status whatsoever should consider himself the luckiest bastard in Sim City. I let him in my golden gates during an elevator ride and this is how he wants to play me? My Sim tried and failed every time to make him love me. This has never happened to me before and I became genuinely saddened by the whole thing. This is not how the Sim’s reality is supposed to be. It’s about happy endings or at least manipulating situations to achieve the endings that we like. It’s like playing God. Only this time, I lost. I didn’t get what I wanted. There was no fairytale ending, I was given a modern day ending and it sucked.

I ended up doing the only thing I could do: Install the Supernatural expansion pack and move towns. I gave it one last shot with Pablo to get him involved with the kids because I would lose all my relationships from this town once in the new town. I was hoping to take him with us if I could reignite the spark, but there was nothing. Since moving to the new town Pablo isn’t listed in the children’s family tree as their father. It’s like that deadbeat bastard never existed.