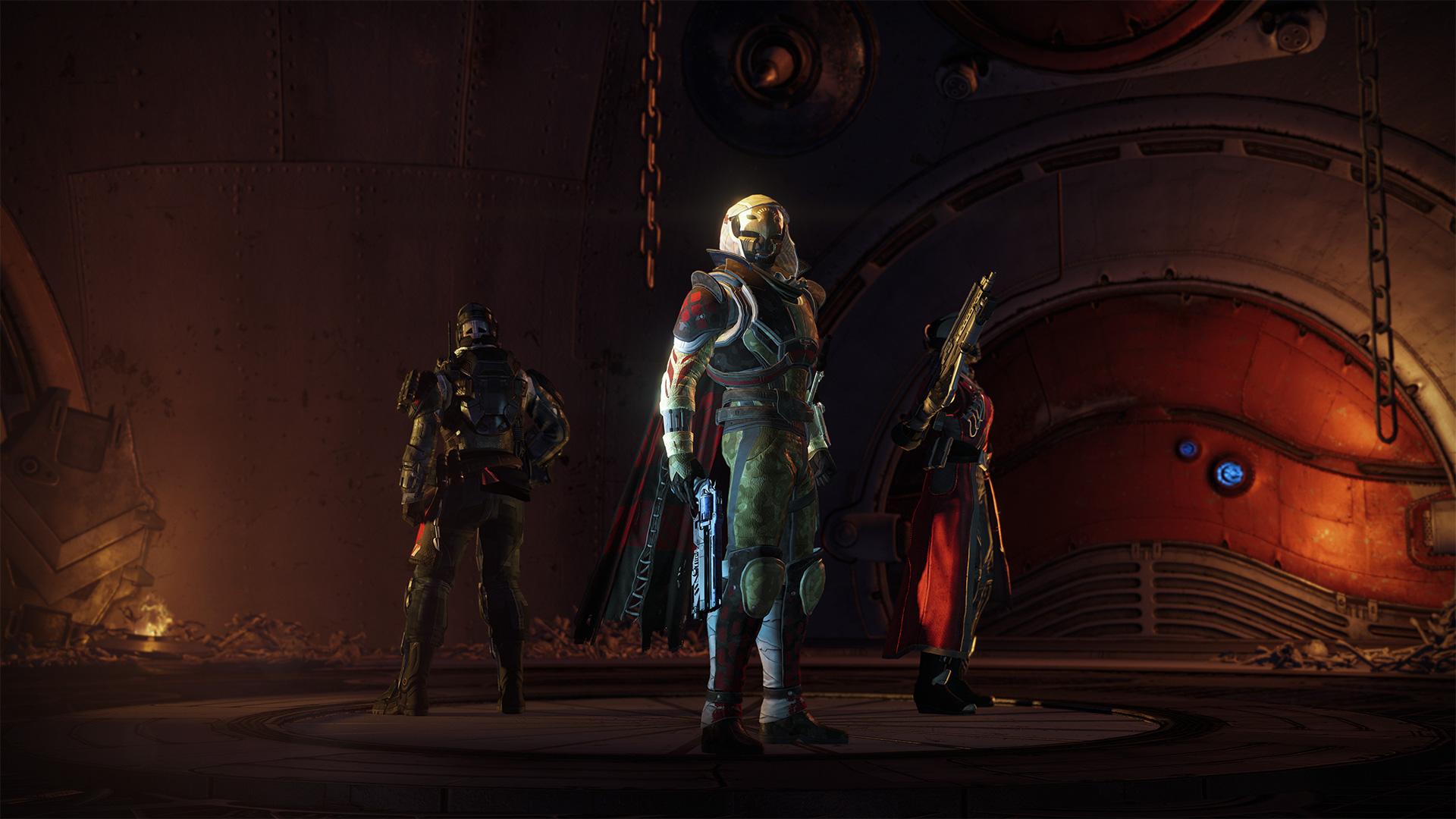 Prisoner of Elders (PoE) is one of the new activities brought in with the House of Wolves (HoW) expansion for Destiny and in a way is the expansion’s spiritual Raid (keep in mind there is no actual Raid with HoW). Basically PoE is a round-based arena/survival mode whereby three guardians (your fireteam) must survive five rounds that consist of three waves each. It’s like a Gears of War horde mode or Halo Firefight. In most cases, Round 2 to Round 4 will have objectives that need to be completed. These objectives are nothing much really, it’ll be one of three things and there isn’t much variety when it comes down to it. You’ll either have to eliminate the target, dismantle splinter mines by standing in a zone for a short period of time or destroy splinter mines by shooting them until they explode.  It should be noted that weapons from the Vault of Glass raid with the “Oracle Disruptor” active (deals bonus damage to Oracles inside the Vault of Glass) will have the perk activate against these mines and deal the bonus damage, making these mines even easier to destroy. In Round 5 five you’ll fight a boss that will have certain specific mechanics which combine to make these fights quite interesting. We’ll be discussing said mechanics a little further on.

Prepare to enter the arena

Throughout the PoE, many encounters will have many different modifiers active. These modifiers can either benefit you by giving you buffs or hinder you by aiding the enemies you face. Here’s a list of possible modifiers:

Do you have the key?

PoE comes in four different level modifiers. First up is the level 28 PoE Arena mode. It is mandatory to first complete this in order to tackle the challenge modes. This version is completely randomised for every encounter and the final boss lacks a mechanic. However, once you defeat the boss you will be taken to the treasure room where lots of goodies can be obtained. Upon your very first visit to the treasure room on a character, you will be guaranteed an exotic to drop. It should be noted that the level 28 can be completed as many times as you’d like, but don’t expect an exotic every time. Now there are the level 32, 34 and 35 PoE challenge modes. Level 32 and 34 go through a fixed rotation on a weekly basis. You can complete each level’s challenges once per week (if you have the requisite level/balls to do so) and you’ll definitely want to in order to reap the sweet rewards. The level 32 challenge mode will give you an armour core, a currency that is used to purchase maximum light level armour from the House of Judgement vendor, Variks, in the Reef. The level 34 challenge mode will give you a weapon core which is used for purchasing the Kell weapons from Variks, and an Etheric Light (a resource that is essential to ascending any older legendary weapons or gear to the current damage/light cap (365 damage or 42 light). Etheric Light especially is highly sought after and you’ll want to get your grubby mits on as much as possible to level your gear.

So here’s a list of the challenges that rotate weekly by order that it will appear in level 34. NOTE: Once it appears as the 34 challenge mode, the following week it will be level 32.

Boss mechanic and modifier: Solar Burn (solar damage from any source is increased by 300%) is active and periodically, Urrox will set the floor alight, dealing considerable amounts of damage to guardians who are grounded.

Boss mechanic and modifier: Trickle is active (recharge times for super, grenade and melee abilities are increase). Qodron will periodically trap all guardians in containment bubbles that will deal damage to those who remain trapped by them. Challengers must kill an enemy named “Qodron’s Eye” which will grant them a buff called “Jail Breaker” for 30 seconds. The guardian who has the buff active will be responsible for breaking the fireteam out of containment.

Boss mechanic and modifier: Grounded is active (Guardians receive more damage while in the air). Kaliks will consume certain enemies to recover his own health from time to time. Killing all the yellow health enemies named “Archon Servant” will result in Kaliks being unable to recover health. Once Kaliks Prime reaches about 50% of his health, a critical objective becomes active whereby you are tasked to kill a VIP before he reaches every checkpoint, failure to do so will result in a wipe.

The air is your friend against Kaliks

Cult Of The Worm:

Boss mechanic and modifier: Exposure is active (Guardians’ shields are increased, but replenish very slowly). Gulrot will give all guardians a debuff where movement is effectively slowed to a snail’s pace. Being behind cover when this happens is highly recommended.

Boss mechanic and modifier: Juggler is active (ammo will not drop for weapons that are currently drawn). Every time Trau’ug recharges his shield it will have a different element.

Finally we have the 35 PoE challenge mode: Skolas’ Revenge. This does not rotate but does reset on the weekly timer. This challenge mode is different in that each round has two modifiers active, there are six rounds instead of five and there are bosses on Rounds 5 and 6. The rewards for beating this challenge are:

Personally, these rewards aren’t all that fitting for such a challenge, especially when the modifiers stack heavily against the Guardians like Lightswitch. Also, the Kell primary weapons aren’t that great and have a wasted perk in the last slot. All perks are (unhelpfully) aimed at working against Fallen enemies and sometimes you’ll be unfortunate enough to get a weapon with Shank Burn (because you really need help against Shanks). As mentioned previously, the Etheric Light is a very useful item so not all is lost. Here is a brief overview of the Skolas encounter:

Boss mechanic and modifiers: The modifiers go through a random rotation every week but Small Arms and Lightswitch seem to be pretty common. When you first encounter Skolas you’ll notice he takes a whopping 2 damage from your bullets, now you can go ahead and try to kill him in this state (good luck to you), or you can go kill one of his invisible servitors named “Kaliks Minor”. Once one of them perishes, you’ll receive a buff where the “servitors bonds are weakened” and Skolas will receive the intended damage from your weapons. Once he has lost about 25% of his health, the servitor bonds will be completely broken and the servitors are no longer required. He will then “taint a guardians light” and a guardian will receive a debuff that lasts for 30 seconds. Once the 30 seconds are up the guardian perishes unless a fireteam member takes the debuff away (this is done by holding Square for PlayStation or X for Xbox when prompted near the infected player) . Once a guardian has the debuff removed from them they are immune for 40 seconds, meaning that there has to be 3 fireteam members. This process must be repeated throughout the remainder of the encounter. When Skolas has 50% and 25% of his health remaining there will be a set of mines to dismantle. Failure to dismantle these mines within the given time limit will result in the entire fire team wiping and starting the whole encounter all over again.

All round good guy of the Prison, Skolas

The Elder Cipher is the exotic bounty quest line that you can receive from doing the level 34 (very seldom) and 35 (fairly common) challenge modes. They will reward you with 1 of the 3 exotic weapons that came with the HoW expansion. These are the Dreg’s Promise sidearm, the Lord of Wolves shotgun, and the Queenbreaker’s Bow fusion rifle. Whichever one you receive is entirely your choice. The hardest part of this bounty is waiting for Variks to summon you, the rest is easy. First you have to receive a Queen’s Cipher from the Queen’s chest in PoE 32, 34 or 35 challenge modes. Then comes the tedious waiting anywhere between 1-8 days real-time. Next you have to attain 1000 points by defeating bosses inside the Prison of Elders. Level 28 and minor bosses award 75 points, level 32 final bosses award 250, level 34 awards 350 and Skolas awards 450. Then you can go claim your prize from Variks.

Overall, PoE and its challenge modes are fun. I personally am not the biggest fan of The Forever Eater challenge mode, and sometimes I even dislike Skola’s. In general, good communication is a must and you’re only as strong as your weakest link. For those of you on PS4 that require some help with these activities, my PSN ID is chillenotsomagic. I hope to hear about all your amazing adventures in the Prison of Elders!