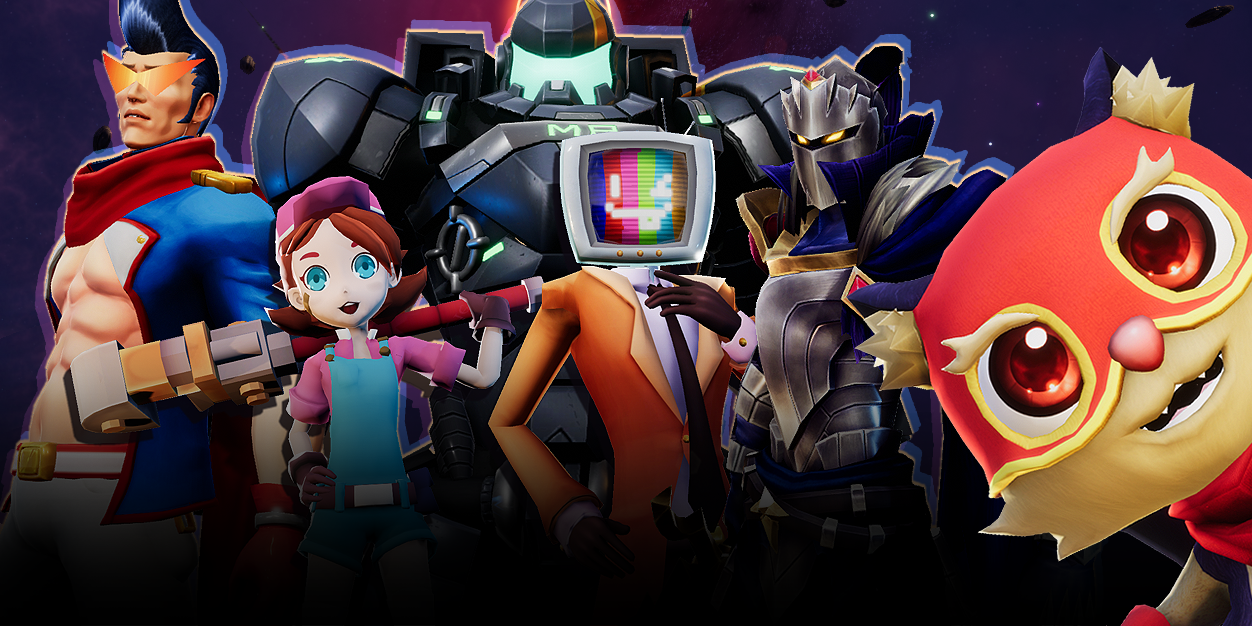 ‘Platform fighter’ is a term I’ll wager you’ve never heard before. Yet, I’ll also guarantee that you’ve played one before that’s not even Super Smash Bros. Cult games like 1999’s BoomBots, 2012’s Playstation All-Stars, and the more recently-released Valkyrie Drive are just a few examples. It’s a genre that’s been growing in popularity (and more hegemonic) over the last few years, with seven of them having been released this year alone.

Thankfully, platform fighters tend to put their own spin on the formula made iconic by Smash. This year’s Indie Pogo, for example, utilised a more physics-based approach to compliment its rogue’s gallery of indie game characters. But what if you like breaking out Melee with your mates but don’t really care about Nintendo’s roster? DimensionVS has your back.

DimensionVS comes to us from local studio TeePee, a group we’ve featured on our Made In Australia segment. This isn’t their first rodeo; last year’s Staff Wars: Wizard Rumble can make that claim. DimensionVS has been in the works for a very long time, but how much more needs to be done before it breaks free from the shackles of Early Access?

DimensionVS takes a fair bit from its inspirations, which has proved more of a boon than a bust. The Smash feel is there with its T’s crossed and its I’s dotted. Characters feel smooth and responsive. Maps are easy to understand and visually non-obstructive. Nailing a good combo is as satisfying as you’d expect. It’s certainly a Smash game, that’s for sure. And there’s absolutely plenty of room for the game to grow, but there are still issues that should absolutely be addressed in some way or another.

We’re up all night to belt ya some

The first (and most obvious) is the small character roster. TeePee wants to increase the roster to ten from its current six, as well as some “guest characters”, but the ‘launch’ roster leaves DimensionVS with almost no gameplay variety. It makes sense to focus on balancing a smaller roster on a smaller budget, but it’ll still provide greater predictability as a player’s gameplay hours rack up. One of the utmost necessities to mastering any fighter is the prediction of your opponent, usually through the memorisation of movesets. If there are only six characters, that becomes almost comically easy in a relatively short period of time. More characters will both mitigate this problem and spice up the selection.

That’s not to say that the characters aren’t fun to play! I had a great deal of fun getting to grips with each character, and their characterisation was neat touch after neat touch. This enjoyment owes much to the tight movement each fighter enjoys, even bulkier ones like Renegade. I found myself maining May Rose, because I’m a big sucker for tinkering characters (and cute girls). The gameplay variety in the current roster is there in a sense; players will find themselves drawn to a specific playstyle regardless of how big the selection is. But to reiterate, you’re in serious doo-doo if your players can get prediction down-pat in a matter of hours.

The game’s playerbase plummeted a few days after ‘release’, which isn’t something I’d mark the game down for. It’s tough going for indie games on Steam, especially in a sub-genre that’s so demonstrably dominated by a single title. What I will suggest, though, is bot matches. I managed to play a few games with friends both locally and online (one of which is a huge Smash player), but the lack of bots was sorely disappointing. Budget constraints are almost definitely at fault (again), but this is something that can’t be ignored.

Ain’t that a cute little gun?

DimensionVS was a very buggy game a week ago. Nowadays, it’s much better. The netcode could use some work as disconnects were an issue, and lag was noticeable even in matches with only a few dozen kilometres between me and a pal. It’s a marked improvement over ‘launch’, and the game otherwise runs perfectly well. What hasn’t gotten better over time is the menus and UI. Both feel clunky, especially while using a controller. A more intuitive main menu and/or first-time tooltips would bring the game up to a higher standard. Other minor features like personal stats aren’t necessary but add up to a well-presented game.

And DimensionVS is a game all about presentation. It’s rare to see a 3D-modelled indie title with this much polish in its animations and models, the music ranges from ‘fine’ to ‘good’, maps are colourful and vibrant, and the voice acting for each character is top-tier amateur work. It all comes together to give off a Newgrounds quality to the game, like it’s a labour of love done for kicks.

TeePee is indeed a passionate studio, who are still updating the game and have big plans for it. It’s a curious choice to make a platform fighter a free-to-play one instead of offering the game for even ten dollars. Hell, one could say that it’s a ballsy one. A couple of the complaints I had are being addressed as we speak – rebindable keys/buttons are in the works, more characters are incoming, and ironing out bugs should go without saying.

Aussie games are growing in the indie space, and TeePee are on their way to being one of the best. DimensionVS may have a fair few niggles, but it was a fun game all round. I sincerely hope that it replenishes its playerbase once it leaves Early Access with more spit-polish, and it’s worth giving a go…if you can get a couple of mates to join you. It’s free, under 1GB, and only getting better.