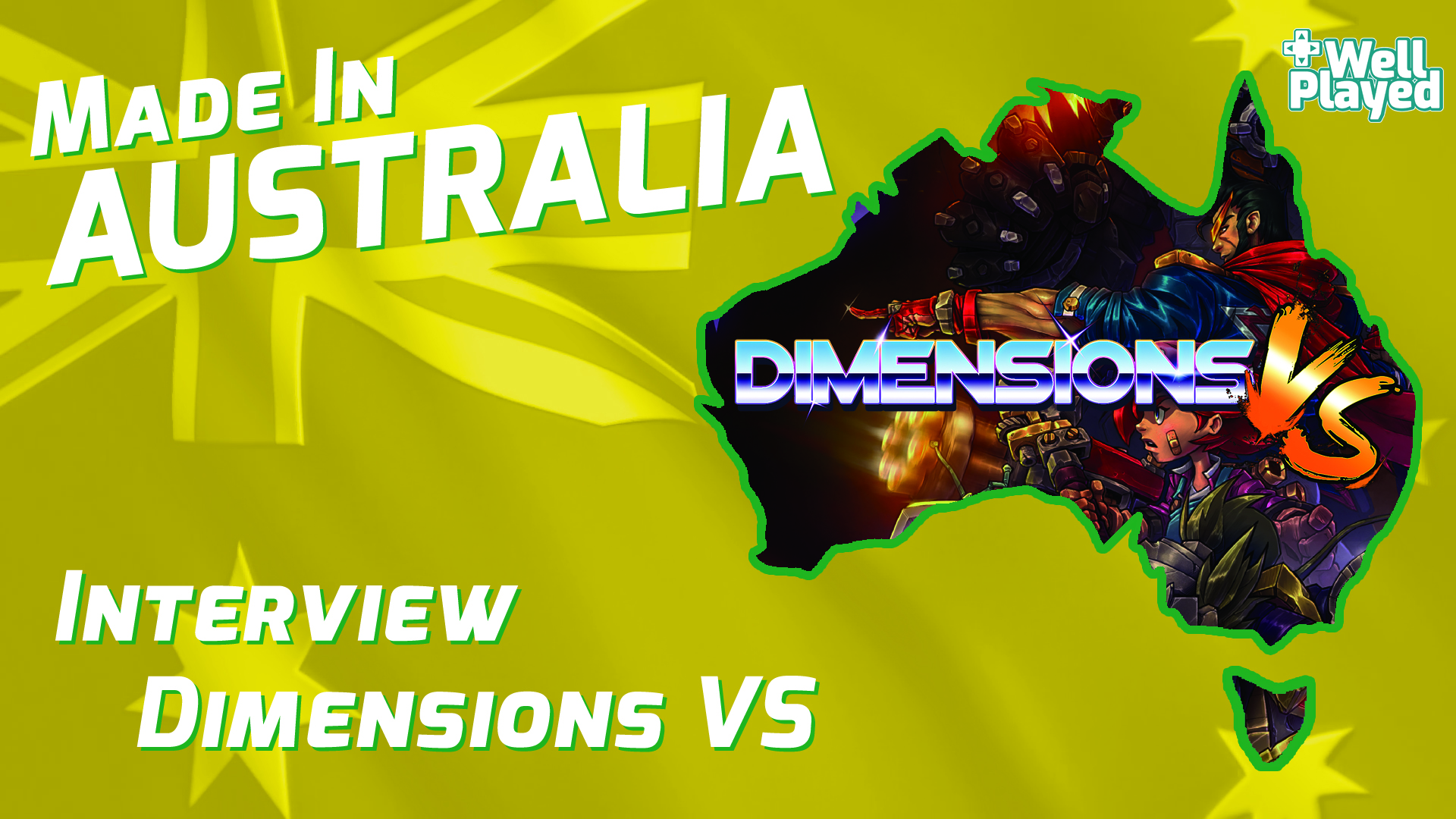 In an attempt to give more of the spotlight to developers and their games that are being developed right here in our own backyard, we started a segment called Made In Australia, where we feature an Australian-based development studio and their game for the course of the month. Our August developer is the Melbourne-based TeePee Studios, and you can read about how TeePee Studios came to be and how the company got involved in video game design via our in-depth feature. TeePee Studios are currently developing the free-to-play party brawler Dimensions VS, which is scheduled to launch in Early Access on Steam on August 20. We caught up Nathan Sola, a project director at TeePee Studios to get the lowdown on Dimensions VS ahead of its launch next week.

Meet your Dimensions VS fighters

WellPlayed: Thank you for taking the time to speak to us about Dimensions VS. In your own words explain to us what the game is all about.

Nathan Sola: Dimensions VS is an approachable free-to-play platform fighter for the PC, starring a cast of unique characters from franchises that may or may not exist!

WP: When did development on Dimension VS begin?

NS: Dimensions VS did begin development as a student game way back in 2015. There were plenty of hiccups, distractions and real life interferences along the way, but it’s finally ready.

WP: What inspired you to make a game like Dimension Vs?

NS: We were all massive fans of Super Smash Brothers and the Platform Fighter genre in general, so it was natural that we made a game that we wanted to play.
Though initially it began as a student game, the release of Rivals of Aether also helped us realise that we could push it further and that people aren’t opposed to games in this genre.

WP: Why did you decide to make Dimension VS a free-to-play game?

NS:  Though there were a bunch of factors that went into the decision, the short answer – we’re a small studio, and our lack of a marketing budget makes selling a premium game hard.
We want the game to be as accessible to as many people as possible, and we want to build a playerbase. Free to play seems to be the best way to get the most people to at least try the game.

Dimensions VS began life as a student project

NS: Pay to win microtransactions suck. As a result, the only items we’ll be selling exclusively for premium currency will be cosmetic – things like costumes, taunts, and particles, and even then free players will be able to unlock a fair amount of these via in-game currency. You also have the option of purchasing characters with premium currency to get them faster. That said, we do have a free character rotation, free starting characters, and all characters can be earned through in-game currency as well.

WP: How many characters will be available at launch?

NS: For Early Access, we’ll have six playable characters. We’ve spent time making sure that they each have entirely different playstyles, with another character on the way shortly after launch! We’re aiming for at least ten playable characters for full release.

WP: Will the characters have their move sets or unique abilities?

NS: All characters have unique movesets, which includes nine grounded, five aerial, and four special attacks that are entirely unique to that character. Some characters also have passive mechanics that power them up – for example, Hiro has a bar that charges up to empower his Blaster, and Metorias moves faster and can attack to regain health after using certain Specials.

WP: What sort of customisation will the game feature? Can players edit their characters at all?

NS: We do have some light cosmetic customisation elements. Characters have loadouts, where they can equip full body swaps and colour swaps, as well as taunts, particles, respawn platforms, and launch trails.

WP: Do you have any plans to monetise the game after it’s launch/out of Early Access?

NS: We would only consider selling Dimensions as a premium product if it were something the playerbase were really vocal about, though we do think the free-to-play model we’ve settled on is fair for everyone. We have considered a season pass in the past which would effectively be a compromise, but ultimately haven’t included it in early access version.

Six of the best fighters you’ll ever see

We were all massive fans of Super Smash Brothers and the platform fighter genre in general, so it was natural that we made a game that we wanted to play

WP: Early on in the project there were plans to include characters from other indie titles. What lead to their inclusion being cut?

NS: Essentially, early on we were too optimistic and lined up far too many guest characters. We underestimated the amount of work required per character, and so we decided to focus on a smaller, more polished original roster until we could spare the resources that our guest characters deserve. We do still intend to bring in guest characters, but they aren’t going to be our main priority for a while!

WP: The roster appears to be very male-dominated. Are there plans to round out the feminine side of the game?

NS:  Admittedly, there is a massive gender imbalance in our roster. It’s not malicious in any way, it was simply due to an oversight on our part. We intended for a larger roster and just happened to develop most of the male characters first. That said, we’re taking steps to address the imbalance. Our immediate next character is a female. The next few characters are female.  During early access, we will also be introducing the ability to play a female Major Renegade, as we’ve always intended. Hopefully this will be enough to give players an option!

WP: Will the game feature both online and local battles?

NS: The full-release version of the game will have both online and local multiplayer! We do plan on making online our main focus down the line. Early Access will include both, though Local Battles will give players the best experience initially – we debated whether to include Online for initial Early Access launch and decided it was better to have it even in a less stable state.

WP: How many modes will the game feature?

NS: For the time being, we only have our standard Online and Local matches, and the solo Target Break mode. We want to eventually bring in a rotating roster of four or five separate game modes for the full release, which we’ll be releasing throughout early access. Kind of like Overwatch’s Arcade mode.

Fight to the death!

WP: What content are you planning to add post-launch?

NS: Without spoiling too much, we’ll be adding what you’d expect – characters, stages, and game modes.

WP: Calling the game a ‘Smash Bros clone’ means you are likening it to a game with a massive dedicated fanbase. Do you have any concerns that if they reject it you’ll have trouble establishing a playerbase?

NS: It’s always unnerving as an indie – there will always be products with much larger budgets, teams, and IPs . Not having a player base is always a concern.
We do think that Dimensions will find its own audience though. Fighting game fans are notoriously picky, and I feel like the differences our game offers, as well as the platform and free-to-play model will help set it apart for certain people. I think the term for the genre is opening more though – these games now more than ever are less ‘Smash Bros. clones’ and more Platform Fighters in their own right.

WP: What we played at PAX 2016 was a ton of fun. What has been the public’s reception so far?

NS: It’s been amazing bringing games to PAX and other conventions – it’s been particularly surprising seeing the reactions to the game improve over time. It seems like each time we show it off, we get a more positive reception!

WP: Ash Wayling, one of our WellPlayed’s contributors voices several characters in Dimension Vs. How have you rated his abilities so far? Do you think he has the chops to dethrone Nolan North or Troy Baker?

NS: 10/10. He absolutely could, not even joking. The range of voices he can do is incredible – it’s unholy that the person who voiced Empurr is also capable of voicing Renegade. I wish him all the best and hope he gets more voice work in the future!

WP: Thank you for your time. Good luck with the game’s launch on August 20.

If you want to get involved you can join the TeePee crew at GG EZ Bar in Melbourne on Friday, August 17 at their official launch party. Click here for more details.

In this article:dimensions vs, early acces, free to play, made in australia, teepee studios