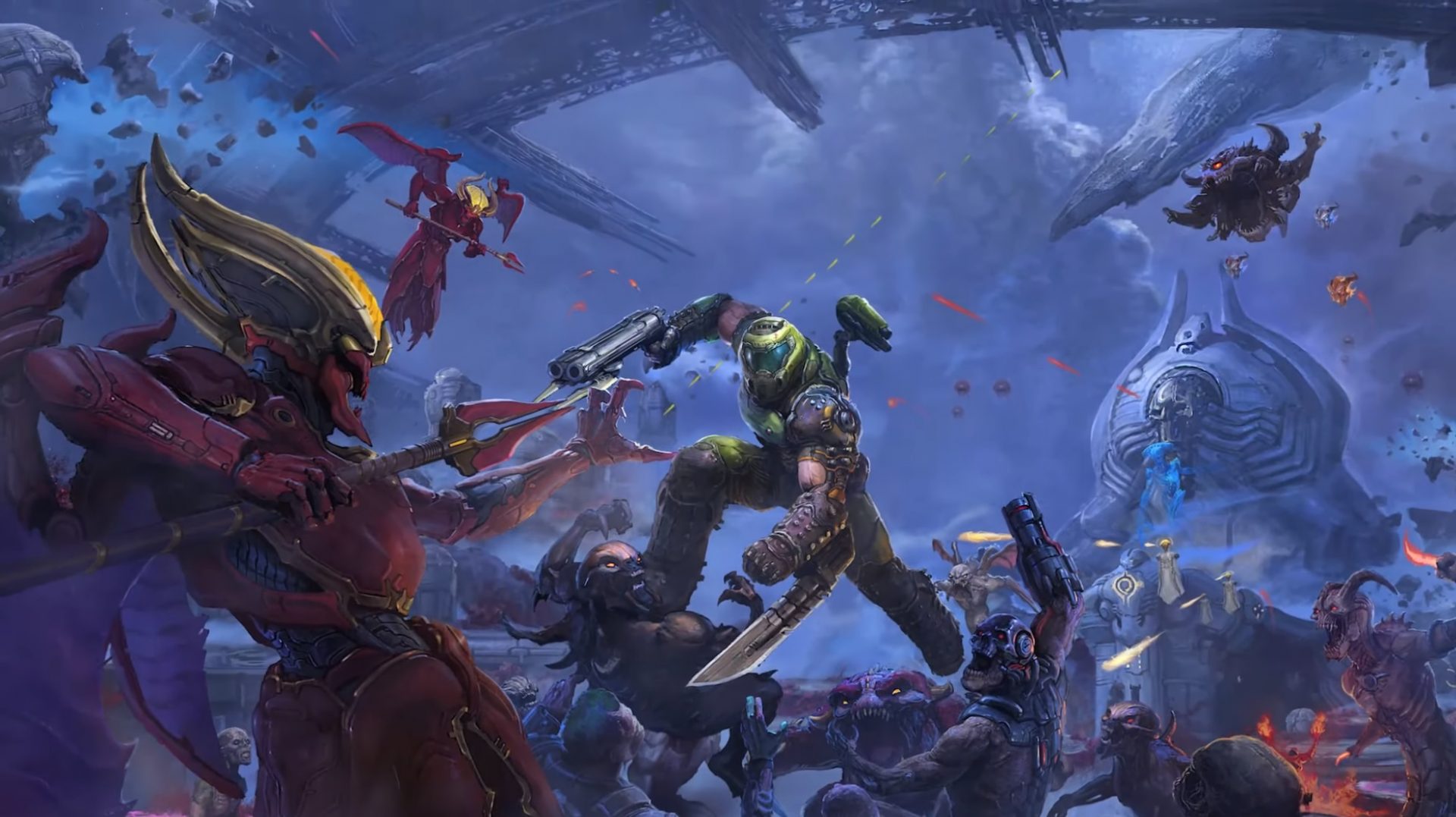 Unlike with its 2016 predecessor, id Software are keen to keep the party going with single-player DLC for Doom Eternal that continues Doomguy’s fabled quest to punch demon and God alike until they are nought but a bloody pulp. If you’re like me and haven’t picked up Doom in a while, you’ll instantly remember two things about this game – it’s bloody beautiful, and it’s bloody hard. So does the first portion of DLC for Eternal reignite a thirst that can only be slaked with blood and guns, or has the demon slayer overslayed his welcome?

I don’t know what this is, but I kind of want to punch it

The DLC picks up directly after the events of Doom Eternal, and while it’s available to purchase as a standalone experience, I can’t stress enough how much of a terrible idea that is. Not only would you be missing out on a brilliant continuation of a genre-defining franchise, but you’ll also be as lost as a Maykr undergoing Transfiguration in Urdak in terms of story. While Doom is predominantly known for granting pugilist demon-annihilating fantasies, Eternal did try fairly hard to establish a bit of depth to the overarching Doom lore. You’ll find people on either side of the fence as to how successful id Software were at creating a compelling backdrop against which to splash demon blood, but I kind of dug it. I’ll admit I had to reread a few primers to understand the context of all the bloodletting, but the continuation of the story is probably The Ancient Gods Part I’s most endearing aspect.

Although your actions in the main game (notably driving the Crucible into the noggin of the Khan Maykr and emphatically halting his invasion of Earth) were undoubtebly awesome, they have come at the cost of allowing Hell’s demons free access to Urdak (basically a holy land which is the polar opposite of the demon’s native Hell). Their conquest of Urdak might provide them a second launching pad for a fresh invasion of Earth, and up with that Doomguy shall not put. What follows is a brief and mildly confusing mission to resurrect a powerful Maykr known as the Seraphim who can re-establish the barrier between Hell and Urdak and send the demons back from whence they came. While it starts off as a straightforward mission to appeal to a higher power to deliver us from evil, the Doom Slayer proves once again that he’s more keen on doing it his way, and a couple of twists are pretty damn entertaining in further demonstrating just how big the cojones of the Doom Slayer really are (spoiler alert: they basically have their on postcode). The brief piece of DLC finishes with a scintillating piece of dramatic panache which is equal parts silly and awesome, and ultimately, I think the DLC succeeds in creating an interesting platform for a new story to evolve.

Situation normal. All fucked up

The brief piece of DLC finishes with a scintillating piece of dramatic panache which is equal parts silly and awesome, and ultimately, I think the DLC succeeds in creating an interesting platform for a new story to evolve.

If you were hoping that DOOM Eternal’s DLC would shake things up in terms of gameplay, The Ancient Gods is for better or worse a case of more of the same. You start with a fully powered-up slayer, with all weapons, mods, runes and suit upgrades completely unlocked (another reason why jumping into this DLC as a standalone experience is a terrible idea). The game wastes very little time throwing you headlong into tough and lengthy encounters where you’ll be tasked with tactically thinning the demon hordes using every weapon in your arsenal. It’s the same incredible and violent resource management interspersed with surprisingly good first-person platforming you experienced in Eternal, which can never truly be a bad thing, but don’t expect anything radically different. I personally would have loved to see a new weapon, or at least some new weapon mods, but unfortunately you’ll have to settle for some fairly inconsequential support runes and a few new skins. This does take some of the thrill out of exploration (although 1ups and BFG ammo are still nice), and hopefully future expansions will rectify this.

Unsurprisingly the game still looks phenomenal, and the new environments are simply amazing. Even though the third and final Urdak mission is recycled from the main campaign, my jaw nonetheless dropped anew. Playing on Xbox One X I played at an unflappable 60 fps, with the only real technical hitch being a swimming glitch in the first mission which lost me about an hour’s progress when I was forced to restart. The fact that I lost early progress hurt, but the fact it occurred during an underwater section which lives up to all the terrible things anyone says about underwater levels stung just a bit more. Talking about recurring weak mechanics, the pesky Marauders who eat Super Shotgun buckshot for breakfast are also back with a vengeance, and I still don’t think they fit well into the flow of combat.

Paradise is a scary place

Some new enemy types do make an appearance, and most add a frantic new dimension to the combat. Some enemies can become possessed by Spirits, which drastically increases their speed, health and aggression. Even a possessed Arachnotron is enough to give one pause, so when you eventually come up against a possessed Tyrant you’ll know the meaning of fear. Once you kill one of these blue-tinged menaces the Spirit will be ejected from its host and become temporarily vulnerable to a Ghostbusters-style Plasma Rifle frying. Fail and they’ll simply possess another demon, and the cycle will begin anon. Turret Demons are a less memorable addition however, being little more than combination of a turret and… a demon. Blood Maykrs also join the ranks as special heavy units who are only vulnerable when they initiate heavy moves; they’re formidable and insert themselves into the many tough but fair fights that The Ancient Gods dishes up.

Playing through the six-or-so hours of Doom Eternal’s DLC reminded me of why I fell in love with the rebooted franchise in 2016; it’s fast, it’s challenging, it’s deep and it’s brutal, featuring some of the finest and most beautifully executed FPS action of the modern era. The Ancient Gods Part I is content on delivering more of the exact same, but there’s a lingering question of whether its narrative strength can carry what is now ostensibly a very familiar brand of gameplay. I’m keen to see where things go from here, but I’m equally keen to see if id Software can push the franchise rather than simply maintaining the (admittedly incredible) status quo they’ve created with this series.

Reviewed on Xbox One X // Review code supplied by publisher 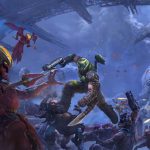 Doom Eternal: The Ancient Gods Part I Review
Reigning Blood
It's more of the same, but when the same is of such high quality it's easy to forgive
The Good
More Doom
The game is still a graphical and technical masterpiece
Continuation of the story actually kind of works
The Bad
A general lack of innovation on the now established formula
Support runes are weak sauce
Underwater levels need to ironically go die in a fire
8
Get Around It

Doom Eternal: The Ancient Gods Part I Review
Reigning Blood
It's more of the same, but when the same is of such high quality it's easy to forgive
The Good
More Doom
The game is still a graphical and technical masterpiece
Continuation of the story actually kind of works
The Bad
A general lack of innovation on the now established formula
Support runes are weak sauce
Underwater levels need to ironically go die in a fire
8
Get Around It
In this article:Bethesda, doom eternal, id Software, rip and tear, the ancient ones, urdak, Wolfenstein