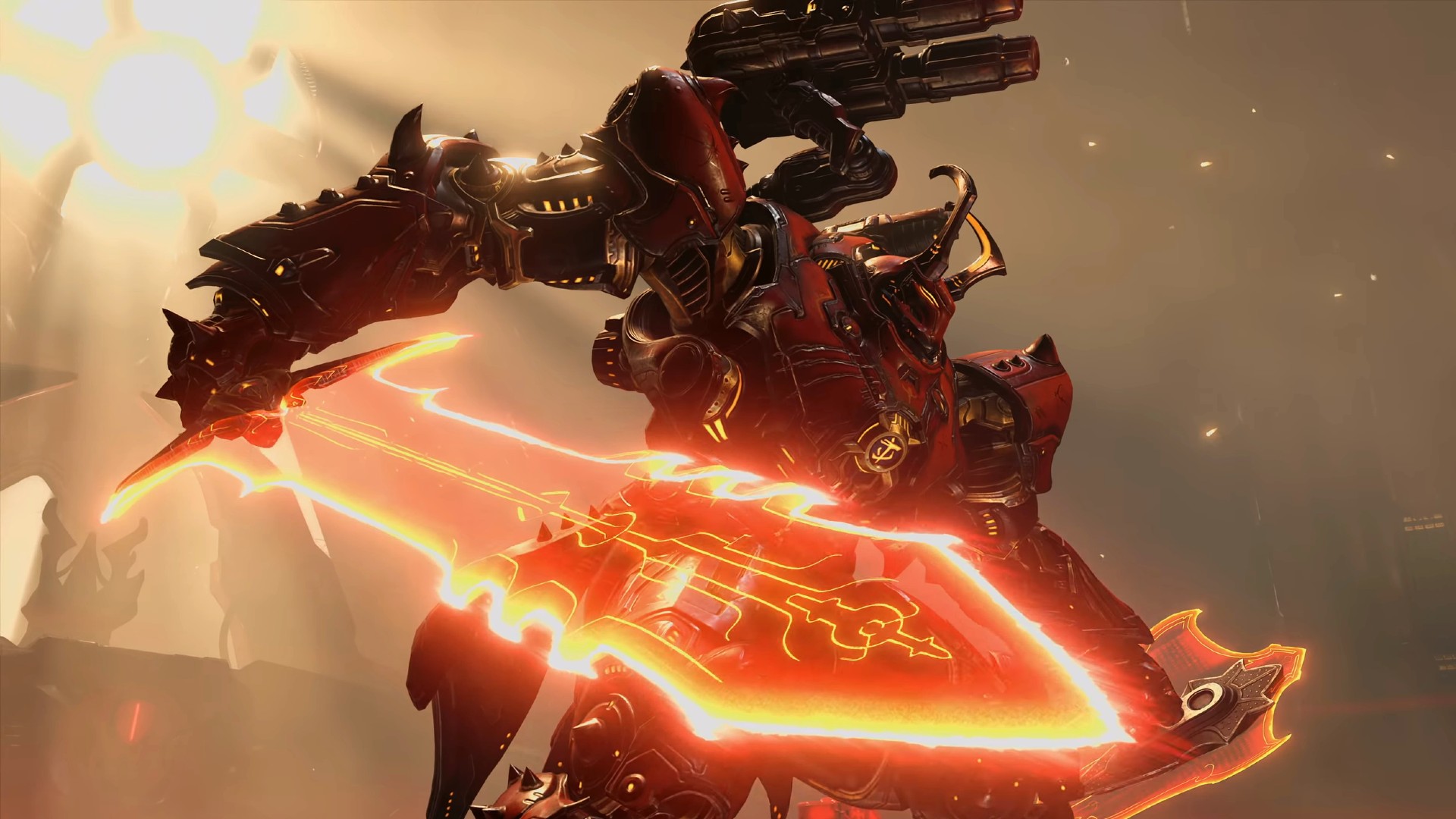 It’s a good thing that games teach us how to be violent, because if a hellish demon apocalypse descends upon the Earth, even Peter Dutton will want people who have been playing DOOM for the last couple of decades in his corner; we’ve practically been training for it our entire lives. No other series quite nails the over-the-top video game violence we’ve come to know and love quite like the rebooted DOOM franchise, and with the new story DLC for DOOM Eternal having dropped in the form of The Ancient Gods – Part Two, there’s a certain sense of finality to the journey that began so innocently (as innocent as emerging from a sarcophagus and reaching for a shotgun can be). I feel like a beautifully gory chapter of history is closing, with the authors putting down their quills momentarily and perhaps marvelling at what they’ve wrought. While The Ancient Gods Part Two isn’t wildly different from the DOOM experience you know, it’s still a satisfying conclusion to an epic struggle.

The Ancient Gods – Part One concluded in dramatic fashion, with the Dark Lord of Hell himself being revealed as basically a dark version of everyone’s favourite Doomguy. I’ve remarked in all my reviews about the surprising depth of DOOM’s lore if you’re willing to throw yourself down the rabbit portal, and while Part Two certainly leans on that lore, it feels more focused and one-minded in how it handles the narrative. Your goal here is incredibly simple: travel to the heart of Hell and partake in a cosmic biff with the King of Hell in a winner-takes-all slugfest that will either rid all realms outside of Hell of demons, or let them roam freely. Whether or not you’ve been following the fact that the Dark Lord (once a benevolent creator seeking to spare his creations the pain of death) was betrayed by a powerful race he created to find the answers to immortality is more or less irrelevant. What is relevant is that his demons are in your base, killing your dudes, and that’s not something to be abided by. The story is there for those (like me) who love its compelling silliness, but even if you don’t fully comprehend the nitty gritty, you will nonetheless know that you’ve accomplished something momentous.

Part Two is fairly bite-sized, weighing in at about three to four hours across three new locales. This is not a negative, as the pace is excellent, never dwelling on one area long enough to make your mind start to wander amongst the hapless slaughter; the goal feels always just within reach, the inexorable march of the Doom Slayer a guide and inspiration. The gameplay by now ought to be extremely familiar, but there’s a few novel twists to keep things interesting (and difficult). New enemy types like Stone Imps, Armoured Barons and Riot Soldiers all require new and specific tactics to take down, and the game continues its clever and relentless combination of enemies to keep you constantly cycling through your formidable arsenal. While I quite liked the Armoured Baron, a hulking demon that needs to be weakened by Plasma Rifle fire or a well-placed shot during a power move before going in for the kill, some enemy variants are decidedly less fun. Shrieker Zombies come to mind, new fodder enemies that will buff the demons around them when killed, meaning you’ve got to be careful if you’ve got a couple of Marauders around not to accidentally off one of these squishy bastards. With a little care and precision they’re not too difficult to navigate (hot tip: kill them last), but the Cursed Prowler on the other hand is an enemy that’s not easy to fall in love with. These guys will curse you if they hit you, hindering your vision, disabling your dash and sapping your health until you can kill them. They can only be killed with a Blood Punch though, which seems a little extra and can be an annoyance if you don’t have a Blood Punch charge in hand.

…the pace is excellent, never dwelling on one area long enough to make your mind start to wander amongst the hapless slaughter; the goal feels always just within reach, the inexorable march of the Doom Slayer a guide and inspiration

In Part One I lamented the lack of new weapons, and id Software has answered my cries with the introduction of the Sentinel Hammer. This bad boy is charged up by glory kills, and when used will stun enemies in a radius, and make them spew health or armour if they’re frozen or ablaze respectively. Most importantly, it finally evens up the fight against one of DOOM’s most hated enemies – Marauders. I’ve never liked the Marauder design, but now when you stun them you can extend the stun duration by smacking them with the hammer, and damn does that feel good. If you’re fighting one, give him an extra smack for me. I hate those bastards. It’s a pity that the end boss fight actually plays out like a bit of a protracted Marauder encounter that incorporates the Sentinel Hammer in basically the same way, but the inclusion of a new weapon and mechanic fits in nicely with everything else. Completing gore nest challenges in each level also allows you to upgrade the power and effectiveness of the Sentinel Hammer, which is a nice touch.

There’s also an update to your locomotion options, with new meat hook grapple points allowing you to use the super shotgun to sling yourself around. The platforming elements in Part Two are actually fairly light, not really making extensive use of this mechanic, but given exploration is muted because you already have full access to all weapons and upgrades, this kind of makes sense. Another subtle addition is that of indicators for important stuff like chainsaw fuel and flame belch being added directly to your reticule. This means you can keep your eyeballs on the action to a greater extent, and they’re visible without being obscuring.

Unsurprisingly, the game still looks and sounds amazing. The heart of Hell, Immora, in particular looks positively stunning, and the game hums along at a blistering 60fps with all the confidence that the amazing id Tech 7 engine allows; it will be a hot minute before we see a game that rivals this series in terms of graphical fidelity and performance.

Part Two closes the sarcophagus on Doomguy’s current tale with characteristic style. I have enjoyed every non-Marauder minute with this rebooted series, but is it possible that I’ve ripped and torn enough that my thirst is slaked? One does wonder where the DOOM franchise will go next after this chapter. While many would welcome more of the same, as I put down my controller I got the sense that perhaps it’s time for something new in the space, given that what id Software has created over the course of this rebooted DOOM era approaches mechanical perfection. But whatever happens, whether we see a re-reboot in the form of a CRPG, visual novel or dating simulator, I’ll be wherever id Software commands me when it’s time to pick up the fight again. 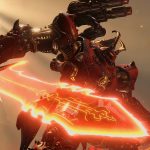 DOOM Eternal: The Ancient Gods – Part Two Review
All Caps Rage
id Software round out the Doom Slayer's bloody interdimensional journey with characteristic style and flair, delivering a punchy and satisfying finale.
The Good
Narrative is tight and focused, with a satisfying conclusion
Graphical fidelity and technical performance are without peer
Sentinel Hammer and some new enemy variants add some variety
The Bad
Final boss fight is a little too close to a Marauder encounter for my liking
Some enemy variants like Shrieker Zombies and Cursed Prowlers aren't overly welcome
It's technically more of the same, even if that same is of amazing quality
8.5
Get around it

DOOM Eternal: The Ancient Gods – Part Two Review
All Caps Rage
id Software round out the Doom Slayer's bloody interdimensional journey with characteristic style and flair, delivering a punchy and satisfying finale.
The Good
Narrative is tight and focused, with a satisfying conclusion
Graphical fidelity and technical performance are without peer
Sentinel Hammer and some new enemy variants add some variety
The Bad
Final boss fight is a little too close to a Marauder encounter for my liking
Some enemy variants like Shrieker Zombies and Cursed Prowlers aren't overly welcome
It's technically more of the same, even if that same is of amazing quality
8.5
Get around it
In this article:Bethesda, doom eternal, doomguy, id Software, id tech 7, marauder dating simulator