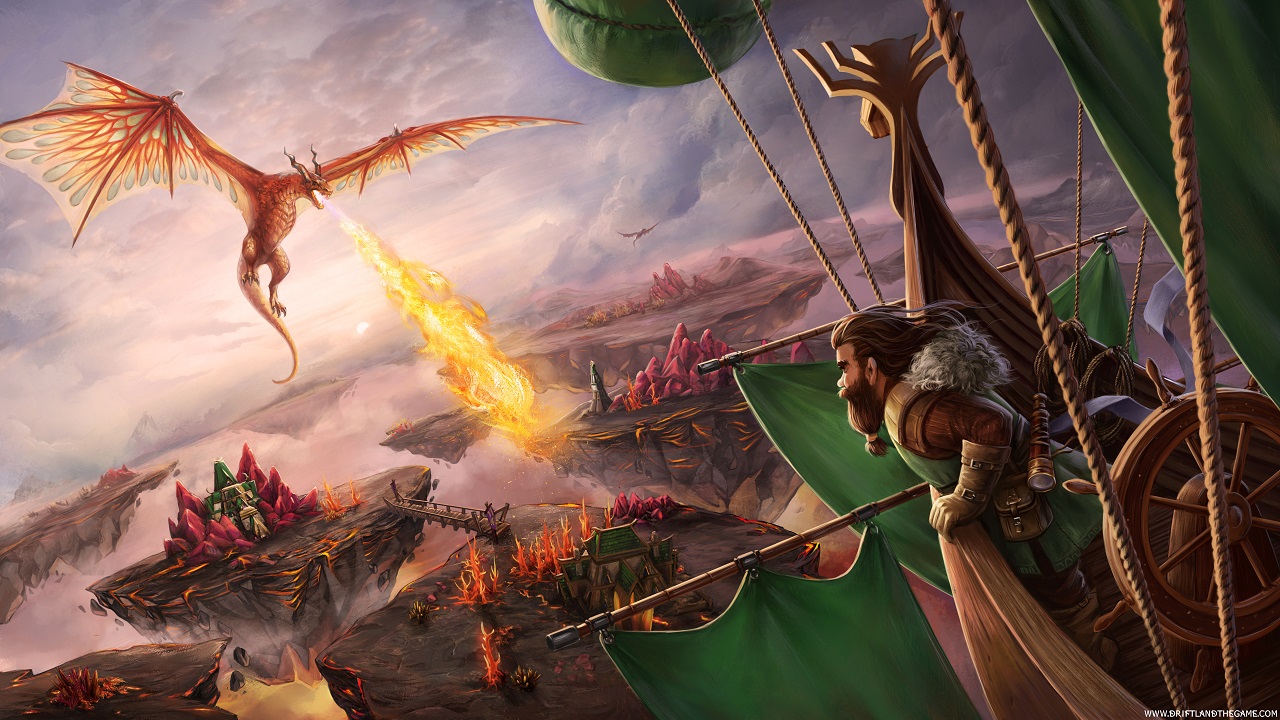 As an art form, video games tend to mix and match genres. Recently successful titles like Crypt of the Necrodancer prove that experimentation with genre still resonates with players, even during a period of intense feature bloat. The newest title to join these genre-hopping rascals is Driftland: The Magic Revival, which combines real-time strategy, 4X strategy, and city sim genres.

After a devastating war, the world was shattered into pieces. High mages from each warring party called a truce to keep the planet’s pieces in balance, losing their power in the process and draining all magic from the husks of what once stood. Years later, magic has returned to the floating ruins of the world. You are a young mage with a dream; to restore the world to its former glory…no matter who stands in your way.

As a mage, you have extraordinary magics at your disposal. The most impressive – and fundamental – of these though, is the ability to move the floating ‘island’ remains of the world to suit your needs. This is Driftland’s ‘gimmick’; playing the game relies on literal land grabs. Over time, you can do more than just move the islands. You can adjust its ecosystem to suit your people, you can send them on loop-de-loops for fun, or you can just blow them up. You also learn different spells, the lineup for these depending on your faction.

Islands provide two functions: land and soil. Buildings need space, resources aren’t infinite, and you’ll need more of both before long. To get more, you’ll need to pull in more islands (literally) and build bridges between them (also literally) to allow you to exploit them. The kicker is that others are trying to get in on that drifting action as well, and you need to be the best if you want to win. You may start happy and cuddly if you wish, but clashes are bound to happen.

Having a standing adventurer’s party to defend your new empire may sound pacifist, but it’s more than enough

Luckily, you’re not entirely defenseless to the whims of mages with different coloured robes than you. Driftlands’ buildings fulfil a variety of functions, but they work in essentially the same way they do in city sim games like The Settlers or Anno. Most of their functions are passive, with military buildings and marketplaces being obvious examples. The former gives you units that you can’t directly control individually but can give collective orders, and the latter allows you to trade resources for other resources not unlike their counterpart in Age of Empires.

Driftland’s middle name is ‘Options’. Marketplaces, for example, can prove to be clutch buildings, but they still provide a way to advance your own goals even without the physical resources you need. You can also opt to upgrade buildings rather than build new ones, to save the upkeep cost of adding more islands to your hoard. Of course, you’ll need to expand eventually, but there are always other ways to get around whatever the procedurally-generated map has in store for you.

Your empire’s populace isn’t one of those obstacles though – provided you can feed them. They’re not afraid of hard yakka or learning something new, as citizens can be manually or automatically shuffled between different industries at your whim. But it never gets overwhelming; to Driftland, micromanagement is a dirty word. I managed to clutch a victory out of thin air this way: frantic shuffling between deficits and surpluses across the resources panel allowed me to make just the right amount of buildings and units I needed to win. It wasn’t optimal, much less recommended, but it provided a rush that made victory that much sweeter.

There are many paths for you to take, all of them potentially victorious

Fail to feed citizens though, and they’ll rebel. To fight them off, you’ll need a state monopoly of violence. Luckily for you, your military units are on the case. There are no humungous armies like in traditional RTS games, but Driftland makes less into more. Each military building can only provide a certain number of units, unless you upgrade them or simply build more buildings. Units will automatically defend their homeland from nearby attacks, unless you give them specific orders. Units can also perform non-combat duties like discovering hidden resources on islands. They’ll also level up and develop their own skills, giving each individual a unique purpose. Having a standing adventurer’s party to defend your new empire may sound pacifist, but it’s more than enough.

And that brings us to the underlying mood of Driftland; more than enough. Developer Star Drifters are making a genre stew that can appeal to fans of any of the ingredients. It helps that their attention to the game’s small-but-dedicated community is nothing short of applaudable. Driftland may be lacking in terms of content right now, but when it comes to early access titles the sky is the limit – even when it becomes crowded real estate.

…and full of flying units