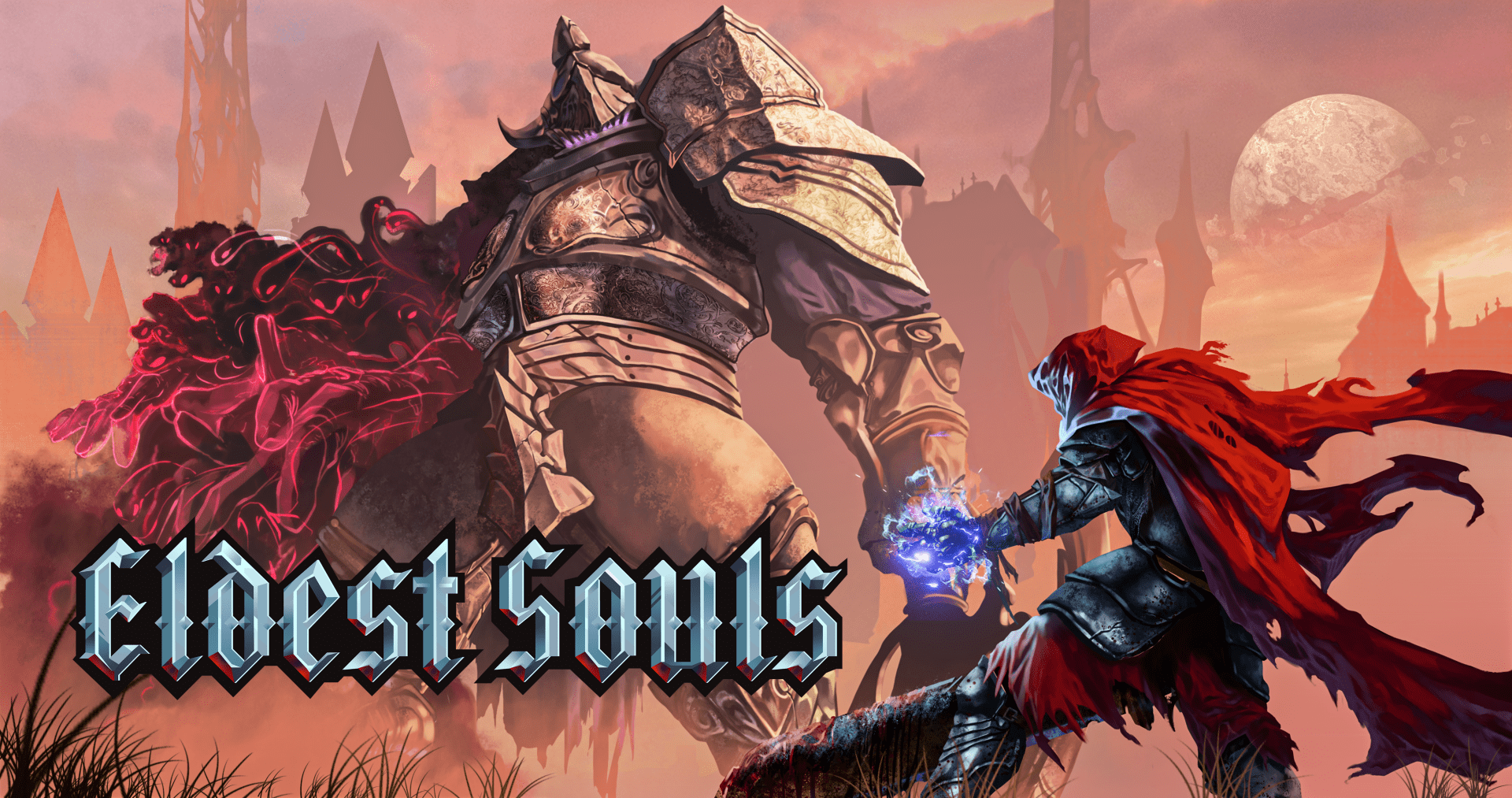 Eldest Souls is the debut title from indie team Fallen Flag Studios. Helmed by two Italians with a penchant for punishment, the product of their spare hours outside of full-time work is an exciting new entry into the growing canon of indie Souls-likes. Unlike more ambitious spins on the FromSoftware gauntlet of pain, Franceso Barsotti and Jonathan Constantini have wisely opted for a 2D isometric sprite-based design akin to Titan Souls. Further stripped away are many of the frustrating obstacles posed to time-poor and less patient players, with Eldest Souls primarily being a boss-rush style of game within a mysterious citadel and barely any downtime between the mad gods that have been trapped within.

Sitting down this week for a session with Francesco and Jonathan, I realised that there was clearly a high bar of expectations from the outset. For them, not us, to be clear (we are WellPlayed after all, a community of hardened capital G gamers). I confessed to the developers over our Discord call that I had only reached the third and final boss of their preview build but was yet to defeat it. I caught a glimpse of enthusiasm in Barsotti’s eyes and the chime of “oh wow” from both.

Shit gets real when the health hits 50%

“You’re already a part of the 1%, then. We’ve only had four people beat the second boss; one has beaten the third boss,” Constantini mentioned between my hearty chuckles failing to hide an inflated ego. But dear readers, wouldn’t you know, WellPlayed brought the pain! Read on.

From the outset, Eldest Souls makes no excuses for wearing its inspirations on its sleeve. Our red-caped crusader docks his boat by a makeshift port attached to an old bridge that leads to the ramparts around the citadel. We find little life inside except for some NPC strangers that tease us with worldbuilding and dialogue-prompted side quest opportunities. Desolation and dilapidation mark this world that has seen ages indiscriminately stretch across it – sound familiar?

In a nice touch that new players of brutal action games will appreciate, occasional pop-ups will appear in a friendly manner to introduce them to the game’s seemingly basic controls. There are no minions to cut your teeth on, so you best figure out how to charge your attacks on wooden barriers instead. Primary attacks are assigned to a single button, whereas holding and charging attacks unleashes a strong dash attack where immediately subsequent strikes restore health. The team was very upfront in emphasising that they want the players to vary their playstyle with aggressive manoeuvres to survive. Regular dashes consume a bar of stamina, and new players will only have three.

A well. A seated soldier. Some nearby skeletons with weapons. We’ve been here before…

Hanging back and learning boss patterns on the periphery of the fight is all well and good, to begin with. The difficulty of these bosses, however, jacks up to such a degree that the best tactic is often to dive straight in.

Death is no penalty in this game. Players will respawn right outside the arena, health and stamina restored instantaneously. Hurl yourself at your problems until you get a breakthrough, and failing that, go hunt down a quest chain or take another path to an alternate boss.

After our short and sweet execution of The Watchdog, the introductory close quarters melee boss with remarkably tight exchanges akin to Dark Souls’ phenomenal Artorias fight, we briefly celebrated before figuring out how best to spend our earned skill point. Each fight will reward the player with either a skill point or shard. Skill trees are the three archetypes of aggressive, evasive, and defensive playstyles. The shards take a page from Supergiant Games, allowing players to allocate them in a way that augments different abilities. Slot one in a dash and you may leave a path of corrosive damage behind when evading. Each shard has different stats and abilities and can even be assigned to an active button to create a new ability, such as the grappling hook. At any time, players can reset their points and shards, so rather than relying on grind or special gear, players will merely adjust their skill/shard build to the needs of the fight.

Boss fight numero duo is against The Guardian, an intimidating armoured giant with wide attacks and projectiles that hamper the player’s mobility. I suggested to the developers that it took me around 15–20 attempts to defeat this tanky knight in my own time, and they laughingly retorted that this fight was initially the introductory fight. We all agreed that not many new players will be passing that high barrier of entry. Watch out for the mid-fight boss evolutions too, as these changes will surprise and are suitably epic against the extraordinary score. We don’t want to say much on these, are they’re too good to not discover yourself.

As a condensed Souls-like experience that draws off the emotional rewards of personal achievement in the face of hopelessness, the team was only too eager to discuss the compromises which make their title unique. Rather than a reliance on pixel-perfect memorisation of attack patterns, bosses have a variety of clearly telegraphed features that will indicate the upcoming combo or attack aimed at the player. By design, this isn’t at all subtle due to the nature of the pixel art graphics and begins in the earlier fights by simply highlighting different parts of a weapon to indicate the coming flurry.

In the third boss fight, players actively participate in the wonderfully fleeting learning experience which is necessary to survive Ezikel, God of Light. This pain in the arse has a halo that glows red and white behind him and observing the patterns and behaviours behind these colour changes is integral to surviving the fight. Ezikel caused me to rage quit the night before the preview as I was impatient in trying to deduce what these prompts were indicating, but it is not so esoteric for those with patience. I also wasn’t acclimated to the shards system, foolishly ignoring the tutorial prompts. Ezikel hovers around the interior of a church, teleporting around and causing damaging beams of light to parse the room. Death after death in no time, I laughed off my initial pride and quickly succumbed to hopelessness – a trap many of us who indulge in these experiences are well accustomed to. But due to the insightful advice of the devs, I took their advice to consider using the grappling hook in combat as both a fourth dash and for evasion and offense. Suddenly, I was now able to zip about the room with comparable mobility to Ezikel. In fact, by the time we got into the second phase of the fight, I was confident in deftly skirting about the church. It also helped that this time around, I could see that different colours indicated what parts of the room the boss would launch his special attacks towards.

I guarantee you’ll smile after thrashing this naughty boi

Eventually victorious, the old god of light got switched off, and WellPlayed received roaring international acclaim and a lovely silver medal – all with only two minutes left on the clock. What a time, and I immediately realised that these folks have done it – they channelled the elation of a Souls boss victory stripped of any tedium, backtracking, or forum-hopping.

Watch out for WellPlayed’s victory lap as we review the full experience in a few weeks. This writer cannot wait for the July 29 release to see if there is more to celebrate beyond the three lovely suitors I took out on my graven honeymoon. Better than Titan Souls? Oh, yes. Coming “all platforms”, so keep watch on PC, Switch, Xbox and PlayStation platforms.