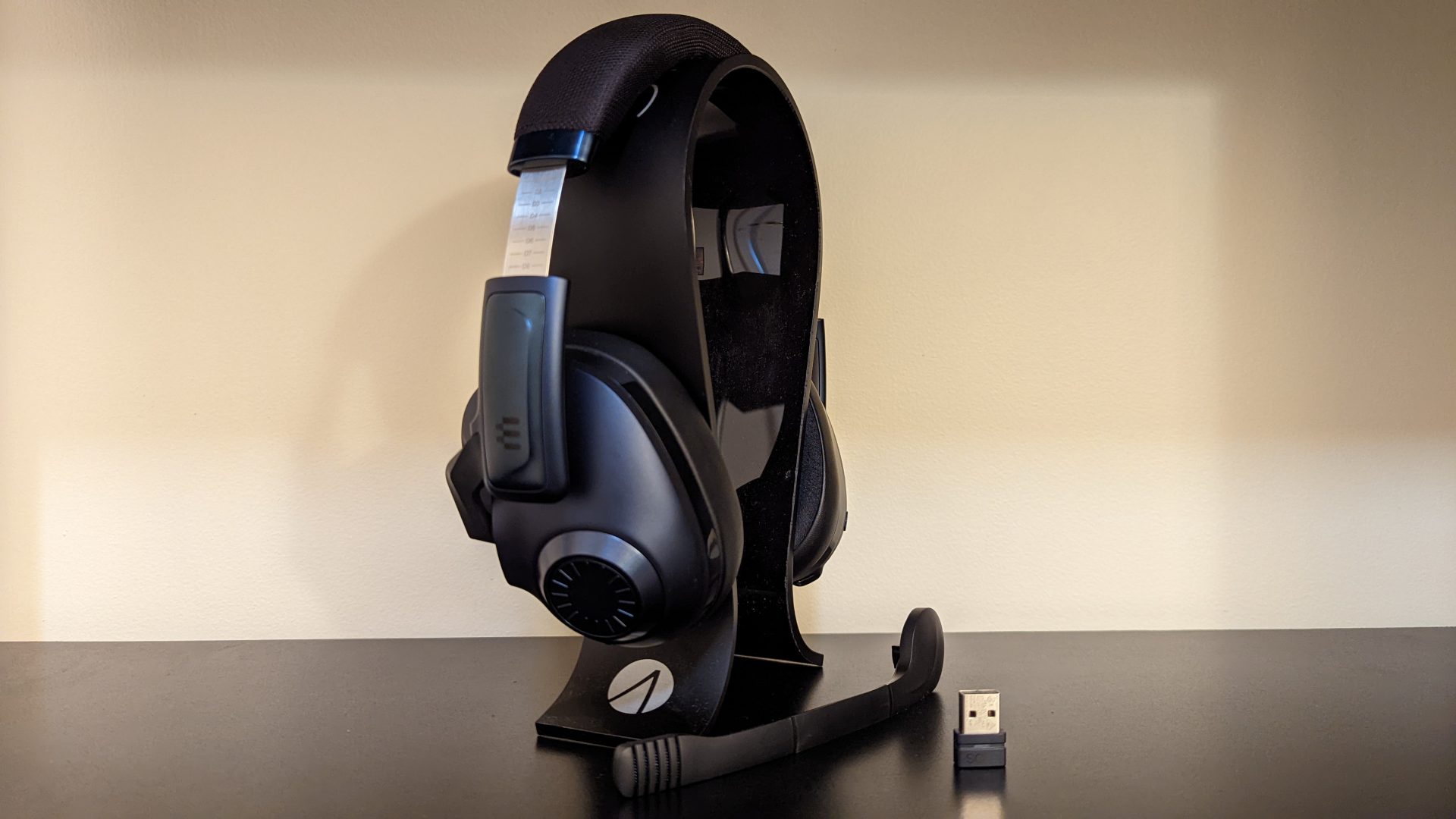 Back in November of last year, I reviewed the EPOS H3 Hybrid, a dual-connection premium headset that I had an endless number of positive things to say about. Though not a massive deal at the time, my biggest wish was that I could enjoy its many great features without the need for a wired connection. Well, EPOS went ahead and said hold my controller, producing the H3PRO Hybrid, a wireless version that sits at the pinnacle of the H3 series. Allowing for extra freedom while maintaining the high level of versatility and quality of its wired little sibling, the H3PRO Hybrid is a best-in-class headset with very few drawbacks.

As far as the aesthetic goes, the H3PRO shares the exact same body as the H3 Hybrid, making it one very sexy unit. Available in a number of colour options, the body is comprised of a hard, durable plastic, with metal running through the band. The earcups themselves are made from a number of different materials, with leatherette being used to surround each cup and a suede-like material being used where the headset rests around your ears.

I’m still completely enamoured with the design of the H3 series. The curves and contours make it look premium, meaning that you can use it as your everyday set of Bluetooth headphones without standing out like a sore thumb as a gamer in a crowd of music lovers. If the gamer look is your thing, that’s completely fair, but for those who like something more reserved, this is the way to go.

Wearing the H3PRO is just as enjoyable as looking at it. The memory foam earcups are cushioned and comfortable, while also being breathable enough that you won’t get a sweaty head after a few hours of use. The shape of the cups is designed to fit nicely around the ear, though some may find them a touch on the small side. The pressure applied for the band isn’t noticeable at all, though it manages to be strong enough to stay on my head while I’m flailing around after dying for the millionth time in Elden Ring. You’ll be set for long play sessions as well, seeing as though the H3PRO weighs in at less than 400g, so you’ll never feel weighed down by your audio gear.

The sleek design makes the PRO a real looker

On the body of the headset, you’ll find the power button on the front of the left earcup and the Bluetooth and active noise cancelling switch at the rear of the right earcup. The volume can be changed by using a disk-shaped dial on the right earcup that’s endlessly satisfying to use. Not only does it work as intended, but it blends in seamlessly with the unit’s overall design. The detachable mic (which we’ll get to soon) is magnetic, making the act of connecting and removing it a dream. And, if you’re listening to music or on a call, you can take off the mic and hide its port with a small cover that’s supplied in the box. It may seem small, but it’s an attention to detail that’s very much appreciated.

As expected from the H3, the H3PRO offers some exceptional sound quality. Much like the Hybrid, the PRO provides crisp, clear audio that holds up across both high and low frequencies. No matter how hectic gameplay gets, I can always distinguish everything separately, from creeping footsteps and falling rubble to distant explosions and whirling bullets. The 7.1 surround sound option on PC works as well as you would hope and so too does the 3D Audio on PS5, giving you an extra layer of spatial awareness. Even when listening to music, the PROs hold up exceptionally well across multiple genres. When using multiple connection types to either listen to music during gameplay or use Discord while online, the PRO doesn’t waver. Seamlessly blending together audio sources, there are no concessions made and both sound equally as impressive.

Just as important if you’re playing games online and chatting with friends, the mic on the PRO is equally as excellent as the headset sound quality. The detachable boom microphone picks up the user’s voice with a scary amount of clarity. The easy flip-to-mute feature makes coming in and out of online conversations easy and the previously mentioned magnetic connection makes it simple and easy to remove and reconnect the mic whenever the need arises. Speaking of which, I did run into the odd bit of mic distortion here and that “made me sound like a robot” according to my mates, but a quick remove and reattach seemed to fix the issue. The headset also boasts built-in mics that are primarily used for taking calls when the boom mic isn’t connected. These are far less clear, but they don’t require the same clarity and more than do the job when needed.

Going wireless takes the H3 series to the next level

Another change from the Hybrid is the inclusion of active noise cancelling (ANC). When toggled on, the built-in ANC does a decent job of isolating noise and allowing you to block out whatever distractions are going on around you. By no means does this feature stack up against Bose, Beats or other high-end headphones, but it’s a feature that we seldom see in gaming headsets, so it’s a welcome addition that does what it says on the tin.

If you’re using the PRO on a PS5, PS4, PC or docked Switch, you’ll be able to take full advantage of its wireless capabilities. Using a tiny dongle, you’re able to plug and play with no effort or pairing required. As soon as you turn the headset on it’ll detect the dongle if it’s plugged into a device and automatically pair for you. The dongle’s range is slightly limiting, giving you only a few metres to play with, but that will likely only be an issue when you decide you need to grab a drink from the kitchen and only hear half of the insult that your friend throws your way. The other two connection types available for the PRO are USB and 3.5mm, though both will still require the headset to be switched on and using power, so don’t think you’ll be able to put off charging the headset by using these as a backup.

It’s worth noting that Xbox users will need to either use the USB or 3.5mm options as there’s no dongle support for Microsoft’s consoles, so it may be worth investing in the H3 Hybrid and saving yourself some cash as the wireless feature is the biggest selling point for the PRO.

Easily the most impressive feature of the H3 series is the dual connectivity. Just like the Hybrid, the PRO doubles as a Bluetooth headset that can be connected to phones, PCs, TVs, you name it. Better still, you’re able to connect a Bluetooth device while using the dongle, USB or 3.5mm connection. Not only does this mean you can easily listen to music or take a quick call on your phone without leaving your game, but it also gives you the opportunity to use Discord while gaming on a console. With the rise of crossplay in recent years, this is a huge feature that can’t be lauded enough. The best part about all of this is that it’s simple and it works perfectly. Just hold down the Bluetooth button, pair your device and that’s it. There’s no weird, choppy audio, there are no interruptions, it just works.

Even after hours of use, the PRO continues to be comfortable

Now, with more going on, the battery life of the PRO isn’t as girthy as the Hybrid, but that doesn’t mean it’s a slouch. I managed to draw out about 19 hours of gameplay using the dongle connection with ANC switched on and roughly 15 hours when using a Bluetooth device at the same time. Of course, this will likely differ from case to case as there are so many different connection combinations, but the overall battery life is good. Using a USB-C to charge, getting the PRO back to a full battery only takes around two hours, so even when you do need to charge it, you’re not out of the game for long.

The EPOS Gaming Suite, the software used to change the PRO’s EQ settings, has seen some love since I reviewed the Hybrid. Far more stable and reliable, the easy-to-use software won’t blow you away, but it does a decent enough job at letting you tinker until you’re happy, as there are a number of preset options you can choose from, or you can go custom.

When you’re looking to spend a good chunk of cash on a gaming headset you want to make sure you’re making the right choice. Coming in at around AU$399, the EPOS H3PRO Hybrids are on the expensive side, but it’s an investment that’s worth every cent. Building on an already impressive foundation, the PRO continues to provide exceptional mic and sound quality while adding to the already huge number of input options. Couple all of this with the dual connectivity and premium design and the H3PRO Hybrid becomes one of the best gaming headsets currently on the market. 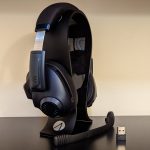 EPOS H3PRO Hybrid Review
Audio Excellence
With great audio, an excellent mic and the endlessly useful dual connection feature, the H3 Hybrid proved itself to be a contender for the best gaming headset on the market. Somehow becoming even more versatile by going completely wireless and adding ANC, the PRO is easily the best premium headset that I've used, more than justifying its high price tag.
The Good
Great audio quality
Excellent magnetically removable mic
Premium look and feel
Comfortable and light
Huge number of connection options
Dual connectivity is still a game changer
The Bad
You pay the price for quality
Using power while wired is unfortunate
Infrequent mic distortion

EPOS H3PRO Hybrid Review
Audio Excellence
With great audio, an excellent mic and the endlessly useful dual connection feature, the H3 Hybrid proved itself to be a contender for the best gaming headset on the market. Somehow becoming even more versatile by going completely wireless and adding ANC, the PRO is easily the best premium headset that I've used, more than justifying its high price tag.
The Good
Great audio quality
Excellent magnetically removable mic
Premium look and feel
Comfortable and light
Huge number of connection options
Dual connectivity is still a game changer
The Bad
You pay the price for quality
Using power while wired is unfortunate
Infrequent mic distortion
In this article:audio, EPOS, EPOS H3PRO Hybrid, Headset