One of the most anticipated games in the Australian gaming landscape is AFL Evolution 2. Footy fans have been keeping a close eye on the sequel ever since it was first announced back in September 2018 with a 2019 release date.

Fans hoping to get their hands on the game before the end of the AFL season were left disappointed, with the game being delayed until late 2019 (November-December) after the development of the game moved to Unreal Engine and the team aimed to the most out of the engine upgrade. Those who purchased the game on launch would receive the game’s 2020 update free of charge as a thank you for their patience.

However, it seems that perhaps the game’s release has slipped into 2020, that is if an updated EB Games listing is to be believed. Previously listed as TBC 2019, the game’s product page (both PS4 and Xbox One – see image below) now shows a TBC 2020 release date. 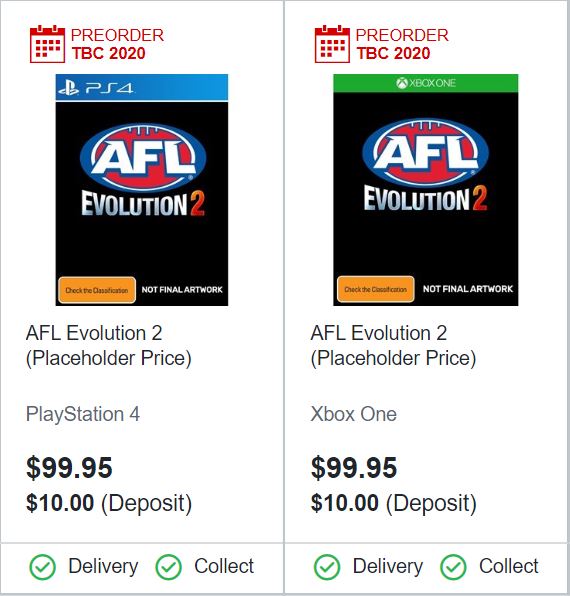 It’s worth noting that other online retailers, such as the Gamesmen, still show a TBC 2019 date, so this could be nothing more than a system mixup. However, given that it’s now early November and we’ve still not heard anything regarding the game’s release in 2019, it wouldn’t surprise us if the game had been pushed to 2020.

Wicked Witch Responds To Fans Over AFL Evolution Concerns
May 6, 2017

Nine Aussie-Made Games To Have On Your Radar In 2020

Every Australian and New Zealand-Made Game Released In 2020