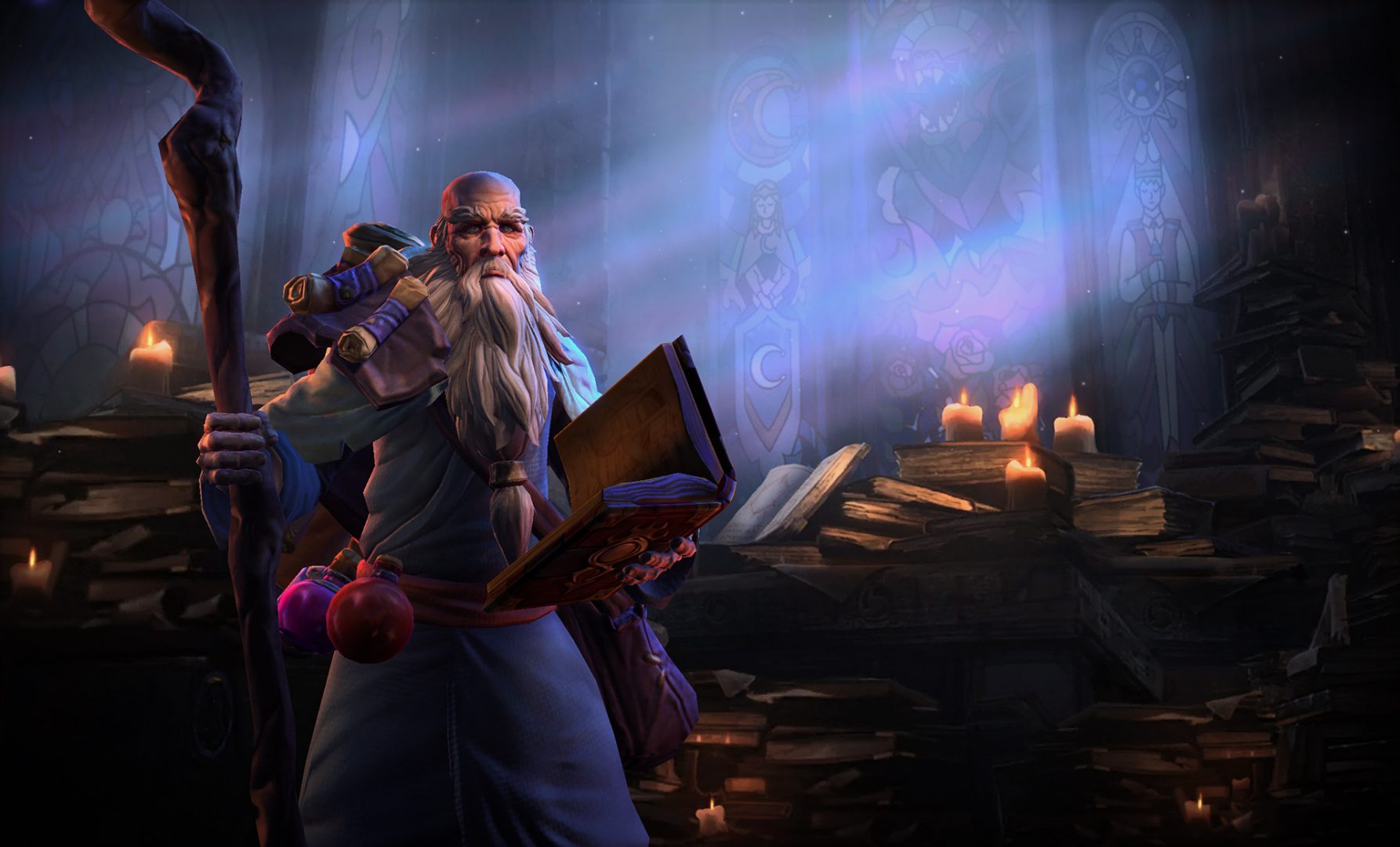 Deckard Cain, the Last Horadrim and possibly the best known old geezer from the Diablo universe, has finally come into the Nexus as the latest melee support hero.

Take a seat so you can stay a while and listen as HeroesHearth Support player Chase “BBJ” Dixon regales you with tales of his first impressions build.

“The main focus of playing any Deckard Cain build is to annoy the enemy team by preventing their ideal engages with your AoE slows and roots,” BBJ says, “while also being able to set up fights for your team while throwing around potions to keep your team alive.” The slow offered by his Horadric Cube (W) ability and the roots his Scroll of Sealing can apply (when aimed and timed correctly, which even BBJ admits is very tricky to pull off) make Cain a potential master of crowd-control (CC), trapping the enemy team to help his allies secure takedowns or helping his team give flight by frustrating any enemy attempts to chase.

“Scroll of Sealing is hard to land unless it is following up on a teammates stun or root,” BBJ says. “However, when kiting the other team, you can put it on top of yourself and kite back from it making the other team choose between getting rooted and possibly focused by your team or walking away from you. In hero league games, teams will likely be spit on their reactions, and you can catch someone walking into your roots as the others are moving back.”

Level 1: Depends on Your Team Comp

BBJ says that Cain’s level 1 talent pick is one of the most situational in his kit, depending largely on what kind of team you’ve built around him. Warriors like Garrosh, E.T.C., and Muradin all offer quick and easy stuns that can help Cain easily set up his Scroll of Sealing (E), which takes a few seconds to cast on the ground before successfully rooting enemies caught inside its triangular casting range. “If you have lots of set up to use your E off of and you can stack the Scroll of Identify quest, it can be pretty good,” BBJ says.

“If your team has no set up for your E, on the other hand, you can go Sapphire to land your own combos—although you don’t need it to land your combo,” BBJ says. The first of three gems that Cain can select in his talent tree, the Sapphire increases the slow amount of Cain’s next Horadric Cube after the Gem is activated. This might make landing the combo easier for some, but BBJ says that, in general, the extra healing power granted by Field Study’s 14-second boost in Spell Power is still the best way to go for most players at Level 1. 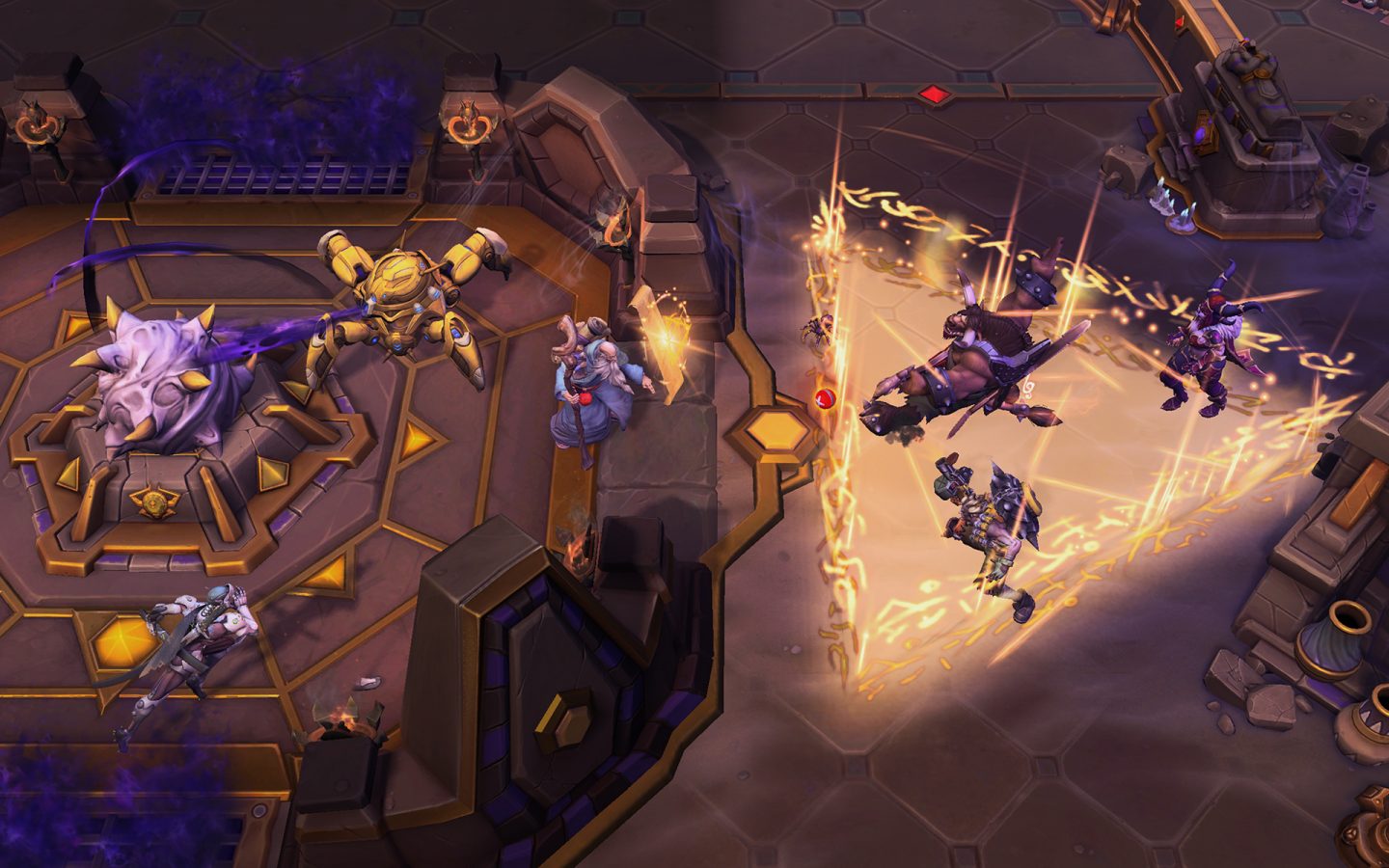 BBJ sees Deckard’s second possible Gem pick as the one real must-have in his kit. “I think the weakest aspect of Cain’s kit is the type of healing he offers, and the number of healing options he has.,” BBJ says. “I think this helps solve it by having another way of spawning potions.”

“Although the potions the Ruby spawns look much smaller than his normal ones, the amount that they heal is actually almost as much as his regular Q healing,” BBJ says. “Due to Cain’s short range on his Healing Potions, he can sometimes struggle to heal his front liners. But with Ruby, if you hit a big W, you can produce massive amounts of healing for you teammates as long as they know to look for the potions.”

It isn’t another buff to Cain’s healing abilities, but the Kanai’s Cube Talent at level 7 will still be a huge help in keeping your teammates alive in the middle of a fight. “Kanai’s Cube can severely weaken the kill potential of any damage dealer that you land it on for 4 seconds, which can be enough time to throw a few potions and keep your team alive,” BBJ says. Hitting an enemy DPS with your Horadric Cube will also mean you’ll drop even more Health Potions if you took Ruby at level 4, meaning after level 7 you should have a much easier time keeping your backline alive from any enemy dive heroes. 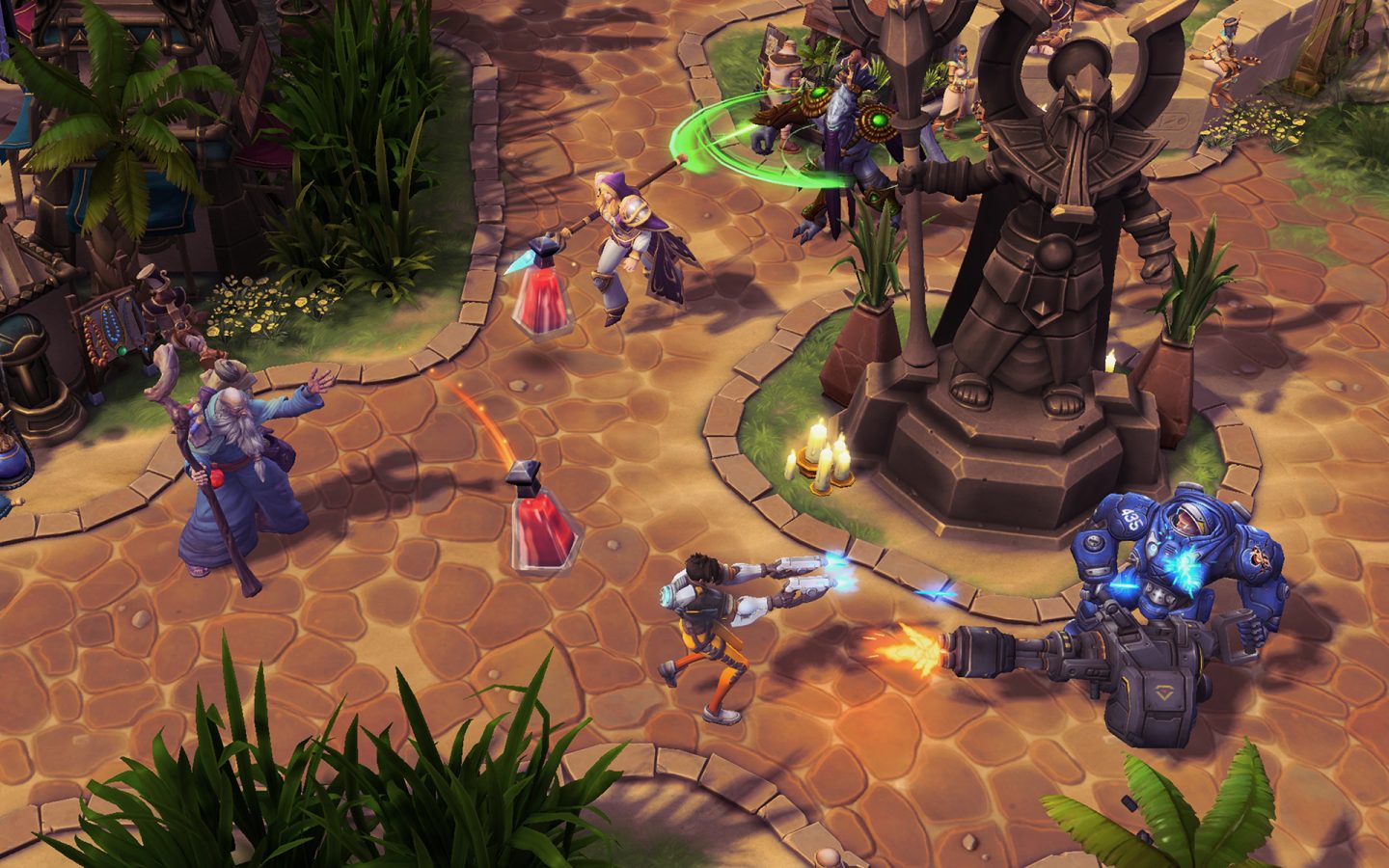 BBJ thinks Lorenado is the clear choice for Cain’s Heroic. “Although Stay a While and Listen looks good for wombo combos, it is also time where you can’t heal allies,” BBJ says. “Sleep is actually pretty weak at most ranks because people just wake up once they receive any damage, no matter how random.”

Lorenado is “actually insane,” on the other hand. “It’s basically a moving Holy Ground that bounces people away too,” BBJ says, referring to an ability of Tyrael’s that creates a ring on the ground enemy heroes are unable to enter temporarily.

“I’ve been having a lot of fun with it, and it’s potential is almost limitless. You can use it to disengage enemies, split the other team in a fight, or secure a boss, mercenary camp, or objective by knocking the enemy around.”

“Ancient Blessing pretty much always gets value and can be insane if the other team clumps up,” BBJ says. “I had times where I could trigger it with 3-man procs and instantly heal 600 hitpoints for every auto-attack.” 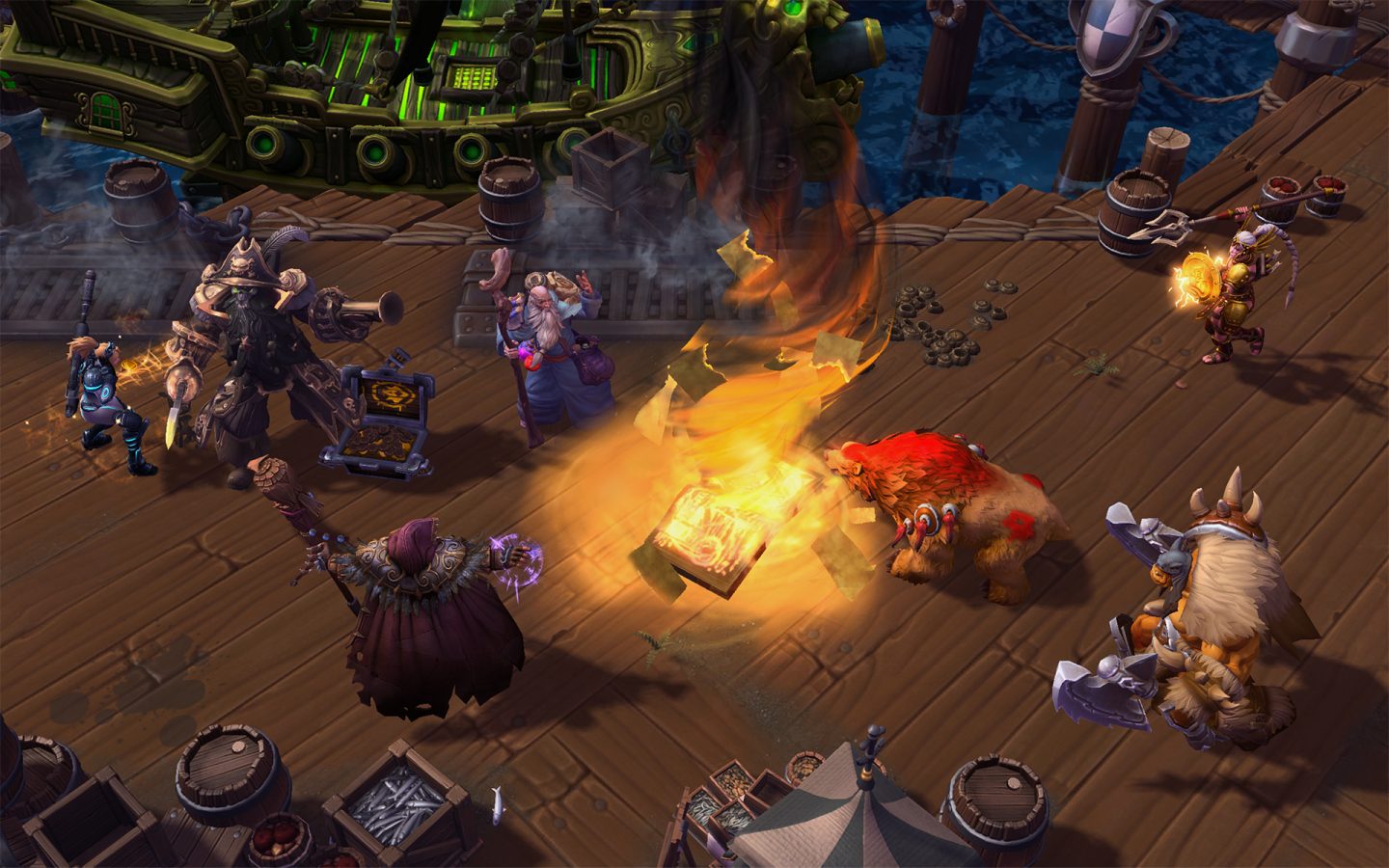 “Safety in Numbers can be insane if you can keep it active in fights, but if you have a team with a lot of dive Heroes that you can’t go deep into the fight with, then Horadric Staff can give Cain some self-peel to help him retreat, and some extra kill potential to help his teammates,” BBJ says.

Level 20: All Ruby All The Time

Even though BBJ only recommends taking one of Deckard’s three Gems as a must-have Talent pick, he still thinks the Gem-centric level 20 Storm Talent Perfect Gems is the best way to go to further empower Cain’s healing.

“I think this Talent is insane when you only have one Gem [Ruby],” BBJ says. “You just permanently have that Gem on every W. The Lorenado upgrade feels a little wonky in comparison, and it’s unrealistic to get more than 10 extra seconds of cooldown in most situations anyways. The Potion respawn ability seems neat but it’s map specific at best, maybe for Battlegrounds like Infernal Shrines and Volskaya Foundry. I just don’t think it actually increases your healing as much as the cooldown reduction on your Ruby, though.”


This article originally appeared on heroesofthestorm.com

In this article:BBJ, Deckard Cain, diablo, esports, heroes of the storm, HOTS