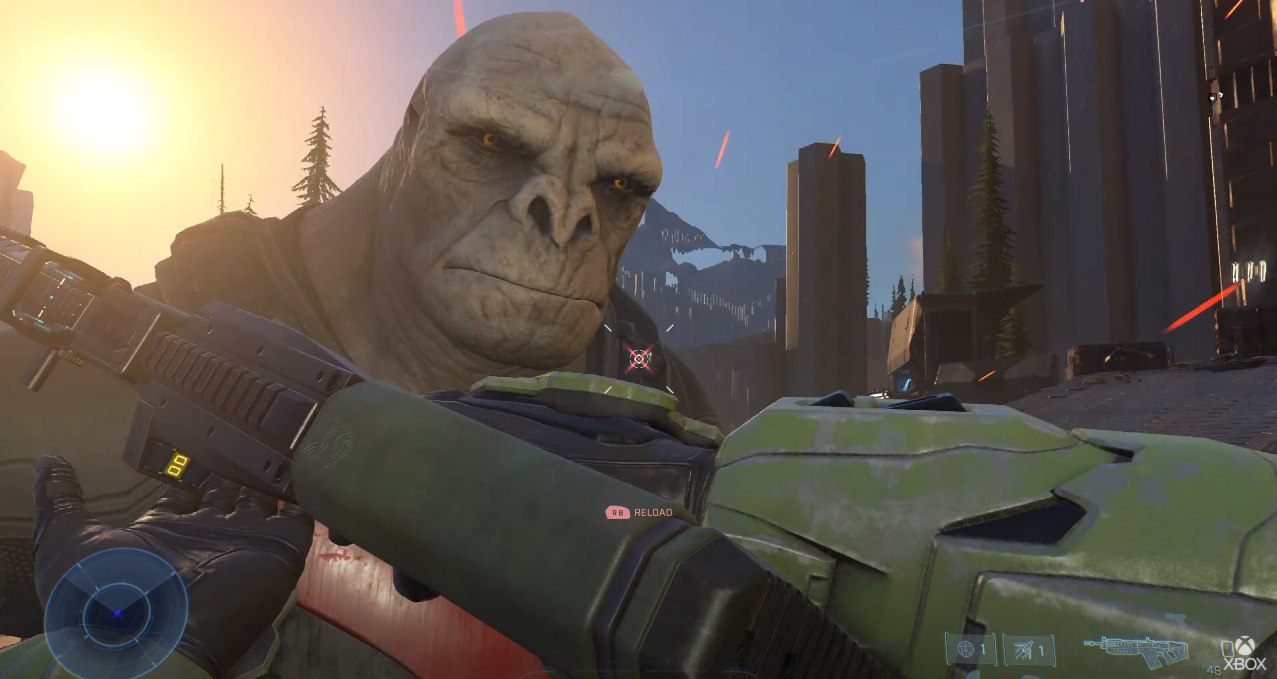 During Microsoft’s Game Conference two days ago we were given a fairly juicy look at some campaign gameplay from the upcoming Halo Infinite, and to describe the reception as tepid is akin to describing my frosted tip phase as a minor indiscretion. From graphic comparisons to the now ancient Brute Force, the emergence of Craig the meme, and just a general lack of here I am, rock you like a hurricane, as Microsoft’s flagship franchise Halo Infinite has some substantial ground to make up in the eyes of the public. It really is a perfect storm of criticism too, as comparisons continue to be made to Sony’s extremely strong AAA exclusive lineup, which has included sequels, reboots and new IPs, all releasing at a blistering pace and featuring some staggering quality. Compare this to Microsoft’s continued over-reliance on wheeling out the old warhorses, and the fact that everyone seems to think the Halo warhorse in particular should be taken to the glue factory, the trailer just didn’t hit the right note in the current climate.

I’ve been known to defend the indefensible before, but this time I’m super serious you guys. Halo Infinite will be just fine, it will look phenomenal running on Xbox One, Xbox Series X, PS5 and PC, and in a world of gritty shooters, Halo Infinite’s cartoonish vibe that’s a high-res homage to the original Xbox classic will make it stand out. It looks like they’re gunning for 60fps on console (likely higher for the mustard race) and probably whatever resolution your platform can handle, and I actually really liked the clean aesthetic on display in the demo. While Microsoft would have done well to include a different game within the showcase that could provide gamers the photorealism they so crave, if 343i can serve up tight, focused firefights with a good amount of challenge and depth (and there’s no evidence to suggest they can’t), then I’ll gladly give Halo 1 Infinite a solid whirl and keep an open mind while doing so.

In terms of story, Halo Infinite is keen to wrap up some loose ends from within the Reclaimer Saga, and I’m particularly interested to see what Cortana has been doing (other than harassing me on Windows 10) after Halo 5 Guardians established her as going off the deep end. One of my favourite aspects of the Reclaimer Saga has been the focus on the bizarre and heartwarming dynamic between the child super soldier and angelic blue AI, and I’m hoping Infinite will manage to do something creative with the downward spiral their relationship is taking. I’ll admit I’m not overly familiar with the Banished, having missed out on Halo Wars 2, but 343i’s creative director has insisted that Infinite’s story will strive to be comprehensible even if you haven’t played every single Halo entry, devoured all the books or own the Master Chief body pillow. It’s worth noting we didn’t actually see any specific reference to Cortana in the gameplay trailer or story trailer, but if she doesn’t figure heavily you’d be surprised. They also didn’t mention Gravemind, so I guess I’ll just keep waiting for that Gravemind-focused spinoff…

What I’m most excited about however, and an aspect in which I believe the colourful and clean art style will play out perfectly, is the multiplayer. The original Halo Combat Evolved and the OG Xbox in general revolutionised how multiplayer FPS could function on a console, but 1078 Call of Duty games later I don’t expect Infinite will be seeking to reclaim its mantle as the console FPS king. What I do expect is that the multiplayer will have a focus on clear lines of sight and intelligent map design that primarily leverage gun skill and not necessarily how many coffees you’ve had and whether you can take it to the sweaty twitchers. Halo 5’s multiplayer was fantastic in this regard, and I’d really love to see the excellent Warzone mode redone with a bit more reverence (read: throw the microtransactions in a dumpster, set the dumpster on fire, let it burn then spit on the ashes). It’ll be interesting to see how the new grappling hook will play into the multiplayer proceedings, but as long as 343i can avoid stumbling into trying to be Titanfall (or far worse, Advanced Warfare), I feel Infinite will have its own niche that’ll distinguish it from the pack and provide an alternative to the popular blockbuster shooters.

The Halo and Star Wars franchises have a lot in common, in that the people who tend to hate them the most are their fans. There’s a lot riding on Infinite’s shoulders as a launch title for the Xbox Series X, but it’s not like 343i aren’t aware of this, and between a Scrooge McDuck-sized budget and no small amount of talent, I’m sure they’ve got something special cooking. If the Internet can stay calm long enough then I believe we’ll soon be able to see the fruits of 343i’s labour in this spiritual reboot, or at the very least we’ll get more Craig memes. Both are fine by me.