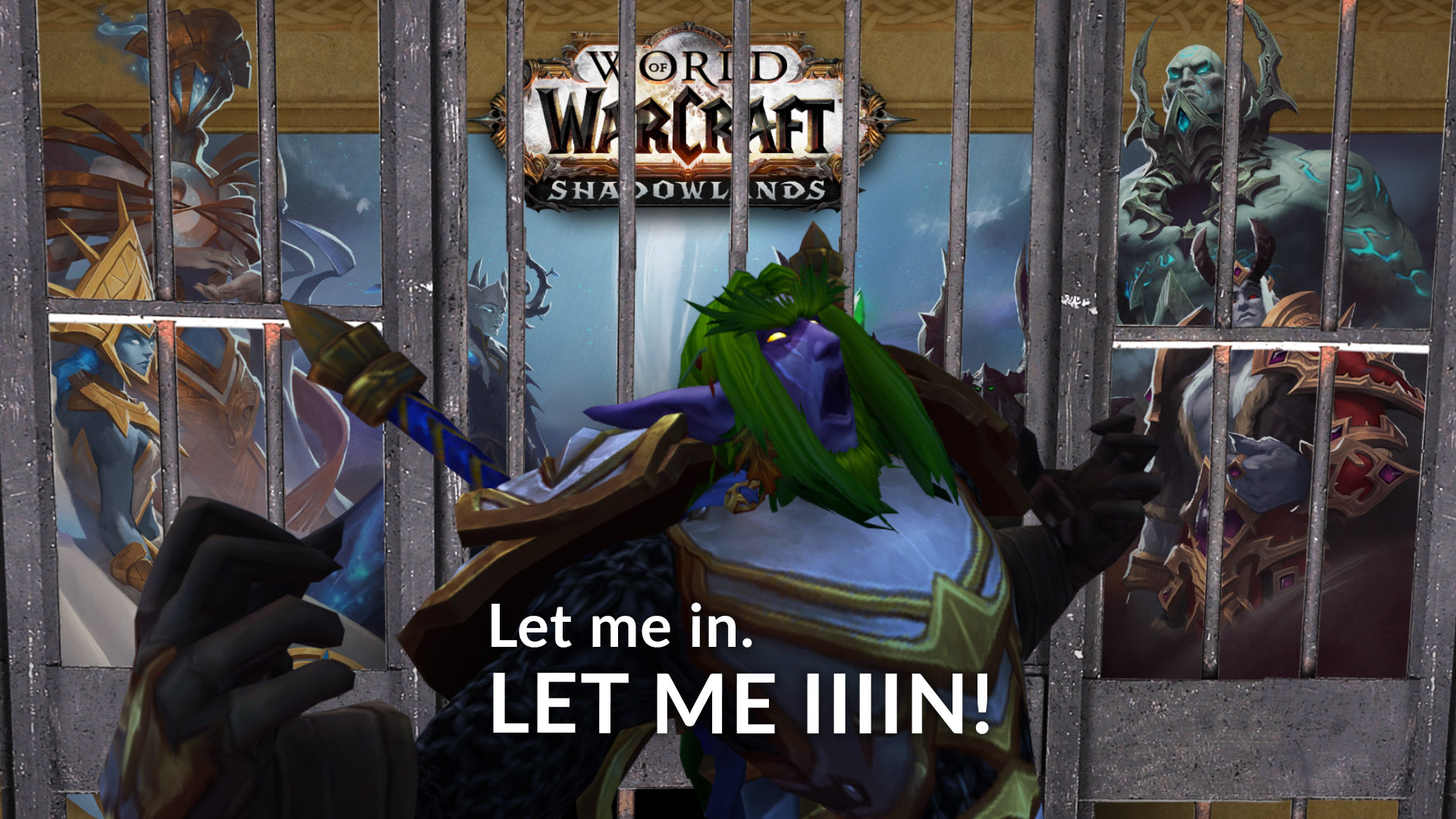 The constant ebb and flow of stories with the World of Warcraft is an interesting one.

Much like The Simpsons, WoW has been around long enough that some fans may feel like they have seen enough of everything that no matter what the team at Blizzard offers up, they may cry that it’s derivative or ‘too similar to <THIS OTHER CONTENT FROM YEARS BACK>’.

The afterlife never looked so lively

At its core is the platform of ‘Expansion-Based Storytelling’, and the expectations attached to it. Each expansion is its own (fairly massive) chapter of the ongoing WoW story – the majority of its tales kept self-contained as a building block of that narrative. It means that your mileage can definitely vary when it comes to the stories being told – and this can be a huge contributing factor to a WoW expansion being considered ‘bad’.

The other contributing factors of course include the game systems that may be present in that expansion, as well as the general aesthetic of its dungeons and raids – but for the sake of the interpretive point I am making here, let’s focus on the less analytical side of people’s initial impressions.

People are becoming quite hyped for World of Warcraft: Shadowlands – in fact, it has the most pre-orders of any expansion that came before it (Shadowlands pre-sales highest of any World of Warcraft expansion) – and that is no slouch of effort. Given the current WoW climate, it is actually quite impressive when you stack it up against the levels of adversity that are leaning against it. The previous expansion, Battle for Azeroth, is a high contender for worst WoW expansion ever according to the masses – surely that would sour people to maybe skip the next one? Take this alongside the release of WoW Classic in 2019 (which is still powering on) and there is another massive contingent of possible ‘no thanks’ people.

But Shadowlands has still found an audience, and a heckin’ strong one at that. I imagine this is attributed to a number of factors – purely speculative of course – but easy to imagine being the case.

Starting off, the immediate visual aesthetic of the expansion is one that has managed to put an interesting spin on the concept of ‘undeath’ within Warcraft. It’s a concept that is far from alien – we have dealt with death and its various inconveniences many times. In fact, Shadowlands may be the first opportunity in the history of WoW’s narrative to offer a ‘benign’ exploration of ‘Life after Death’. It’s somewhat refreshing to step away from zombies (mostly) and evil necromancers (somewhat) for a spell.

The fun kind of spooky landscape

The landscapes and factions we see within the Shadowlands are fresh and unique (and in my opinion, stunningly beautiful at times) – lending to a sense of wonder that even the most jaded citizen of Azeroth can begrudgingly admit to feeling. I was a fan of what Battle for Azeroth offered, with some beautiful forest vistas and Aztec-inspired jungles, but at the end of the day – it definitely wasn’t spooky ghost forests and gothic vampire castles.

Then the denizens of these fantastic lands are all manner of literal angels and gargoyle men. Even the most boring character design I have seen across the Shadowlands is a robot man with a flame for a head. Like, this stuff is inspired – and with 16 years of crazy content being pumped into the game, I thought inspiration would be somewhat dried up. This is the first expansion where my interest in an art book has far surpassed the feelings of ‘huh, neat’.

The real strength of this impressive cast of kooky characters is that most of them are not overtly familiar. The covenants that preside over the worlds of death are populated by a range of new faces with their own interesting motivations. While there are a handful of old hats making their presence known, the bulk of these key players are being introduced to us for the first time. This helps fuel a curious hunger for both new and old WoW players.

Just casually flying my magic worm along the lightrail

Finally, there has been a massive infusion of player confidence directed towards Shadowlands with the delay of its release. Sure, there was a tsunami of frustration that careened across every corner of the WoW community – but at the heart of it all, people knew it was being done for the right reasons. Some of the biggest (and most valid) criticisms levelled towards Battle for Azeroth were the embarrassing issues that were present on its launch; in fact some players actually started referring to the expansion as ‘Beta of Azeroth’ due to the nature of its discovered bugs.

This leaves Shadowlands in a pretty phenomenal spot, with some very high expectations to meet. But at a glance, it does appear that the team at Blizzard are doing everything in their power to make sure this amazing new experience sticks the landing, particularly when they can rekindle a love for World of Warcraft that has seen some decline in recent years.

Having a party? Why not have a guest for dinner…

Brilliantly, I actually had the chance to ask a few questions of Kevin Martens, currently the Lead Designer on World of Warcraft – providing a great opportunity to try and eke out some insights on whether the expansion was coming from familiar minds, and how often they may begrudgingly leave a great idea on the cutting room floor.

WellPlayed: My first question is relatively straightforward, Kevin. It’s mostly to put an end to speculation between friends and other people within the industry. I’ve heard from a couple of sources that there are relatively unique teams at Blizzard that work on each expansion, obviously, because they take months to put together well before they’re ever announced. And I’ve heard rumours that the majority of the team working on Shadowlands had a pretty heavy involvement with the Legion expansion. Is that true?

Kevin Martens: That probably varies according to which different sub-team you’re talking about. We encourage our designers to work on different things over their time here. So, we certainly have designers who have finished up Shadowlands that are moving on to Overwatch, for example, and people coming from other teams and joining us as well. So, people move around like that. But no, I think the majority of the team is pretty stable. And a lot of people here have been here even the entire time. We’ve got 25-year veterans who have always worked on something with Warcraft in the title, for example, on our team. So, no, I’m not sure where that comes from. Largely the team is stable, but certainly people sometimes move around.

WP: How often do you encounter an idea that you feel would be awesome to implement, but it just doesn’t quite fit into World of Warcraft at this time?

KM: I find that question really interesting because I have two different answers. In a way, every single day I find an idea that I want and it doesn’t make it into the game. I’ve got this long laundry list of features and ideas and tweaks and fixes and things that I want to put in a game that may not make this release, but are always sitting there in the background and looking for opportunities to make it into the game. And I think the new player experience as a whole, it is one of those things.

But the other answer to the question, which I think is equally true is that World of Warcraft really has room for everything. Like the Argus release that we had at the end of the Legion expansion. Super sci-fi right? You had a teleporter pads and spaceships and all these things and that’s okay. And that can fit in World of Warcraft. And here we are in the land of the dead with equivalence of the Maw and Torghast with these sort of loose interpretations through the lens of Azeroth, of medieval hellscapes.

But you also have all these various heavens as well, heavily based in fiction and myth and all of our favourite references. So the amount that we can do in this game, that all fits in there from humour to serious, to small moments, that big moments to people’s pets, it really is rich and inappropriate. And I can’t imagine a more fun approach to the world. It’s as light-hearted or as serious as you want it to be. And that can be moment to moment in the game. It’s really cool.

…Speaking to someone passionate about a project, away from the glitz of marketing spin can do a lot to warm a heart – so really at the end of it all, I feel like I don’t have to do a lot to convince people that Shadowlands may well be very good. It seems to be doing a fine job of that on its own.

A huge thanks to Kevin Martens for taking the time to answer my oddball questions – and judging by the pre-order numbers for Shadowlands, I guess all I can say is I’ll see you all there.

In this article:blizzard, shadowlands, world of warcraft